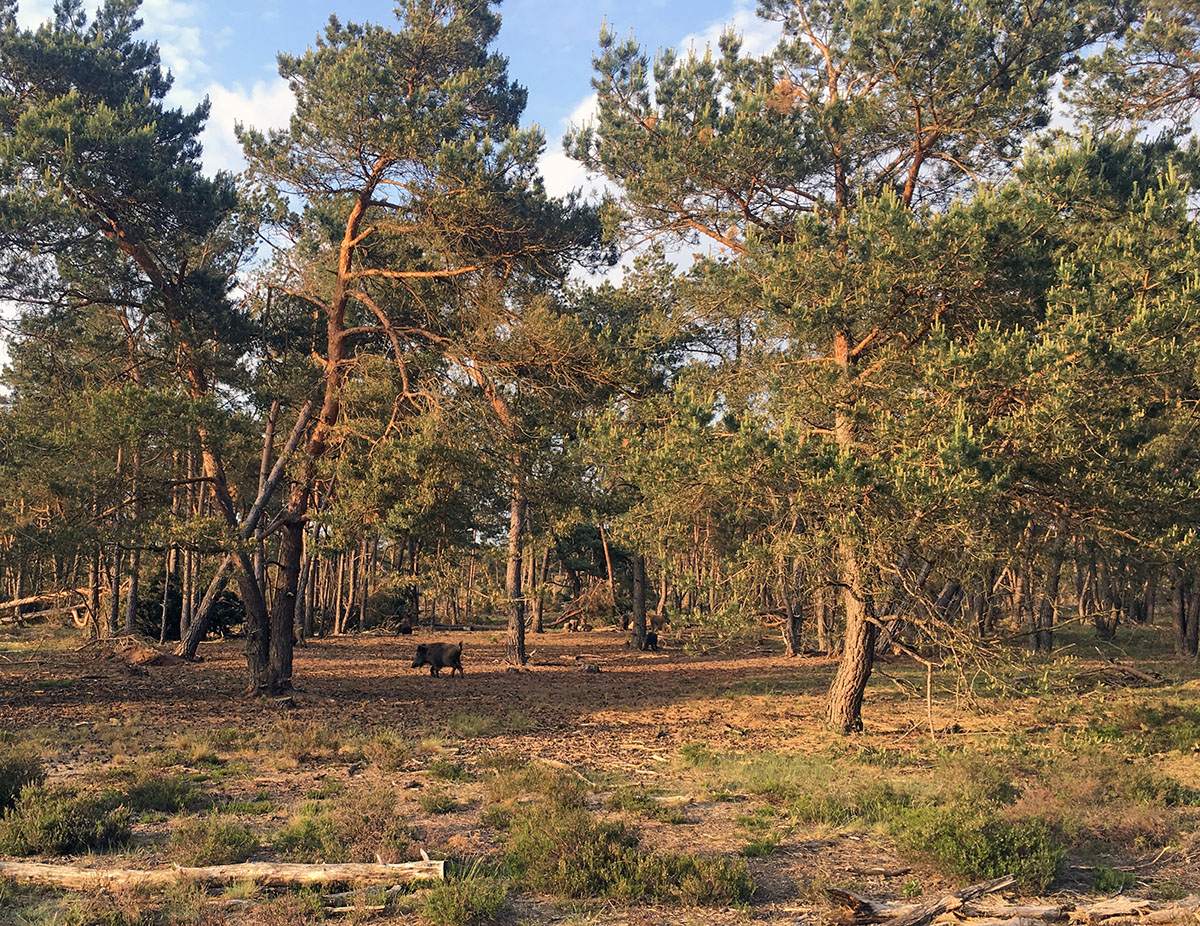 Ever since I live nearby Hoge Veluwe National Park, I head over as often as I can. Sometimes to just walk for a few hours, sometimes in the search of wildlife. I occasionally get the question what the best spots are for watching wildlife in Hoge Veluwe National Park. In this blog I’m sharing the best spots for wildlife viewing in the park and also a short movie that I made with my iPhone, while driving through the park on a quiet evening.

Where to find wildlife in Hoge Veluwe National Park

Basically, you can run into wildlife anywhere in the park. Having said that, there are a few places that can be quite successful. When driving in Hoge Veluwe National Park, I suggest you do take Wildbaanweg and Reemsterweg. Reemsterweg is a side road of the main Kemperbergweg and at the end of this road (where you cannot go any further) is Bosje van Staf, a small gathering of trees and bushes. Here you can usually see large groups of red deer and moufflons. I recently got lucky a few times on the Wildbaanweg as well, close to Deelerveld. Here I saw some wild boar right next to the road, so basically we only had to open up the window to be able to see them right from the car. Another great spot for seeing wild boar is the southern part of the park near the Schaarsbergen entrance. Here are a few marked hiking trails which I’ve hiked several times and even on a busy Sunday afternoon there were almost no other people here and I ran into boar each and every time so far.

In general I’d say that the best time for wildlife viewing in Hoge Veluwe National Park is in the early morning or late at night. I’m usually quite lucky right before the park closes, which is just before the sun goes down and I’m on my way back to Schaarsbergen, where I live. Wildlife is usually all around then but I never really have a lot of time when on my way back to the entrance as I don’t want to cause any trouble staying inside for too long. So definitely stay until late in the evening if you can!

Also make sure to leave the beaten path. From the marked cycling trails I’ve never seen any wildlife since it’s probably too crowded on those. So just put your bike aside for a while and walk into the bush, big chance you will see wildlife along the way. 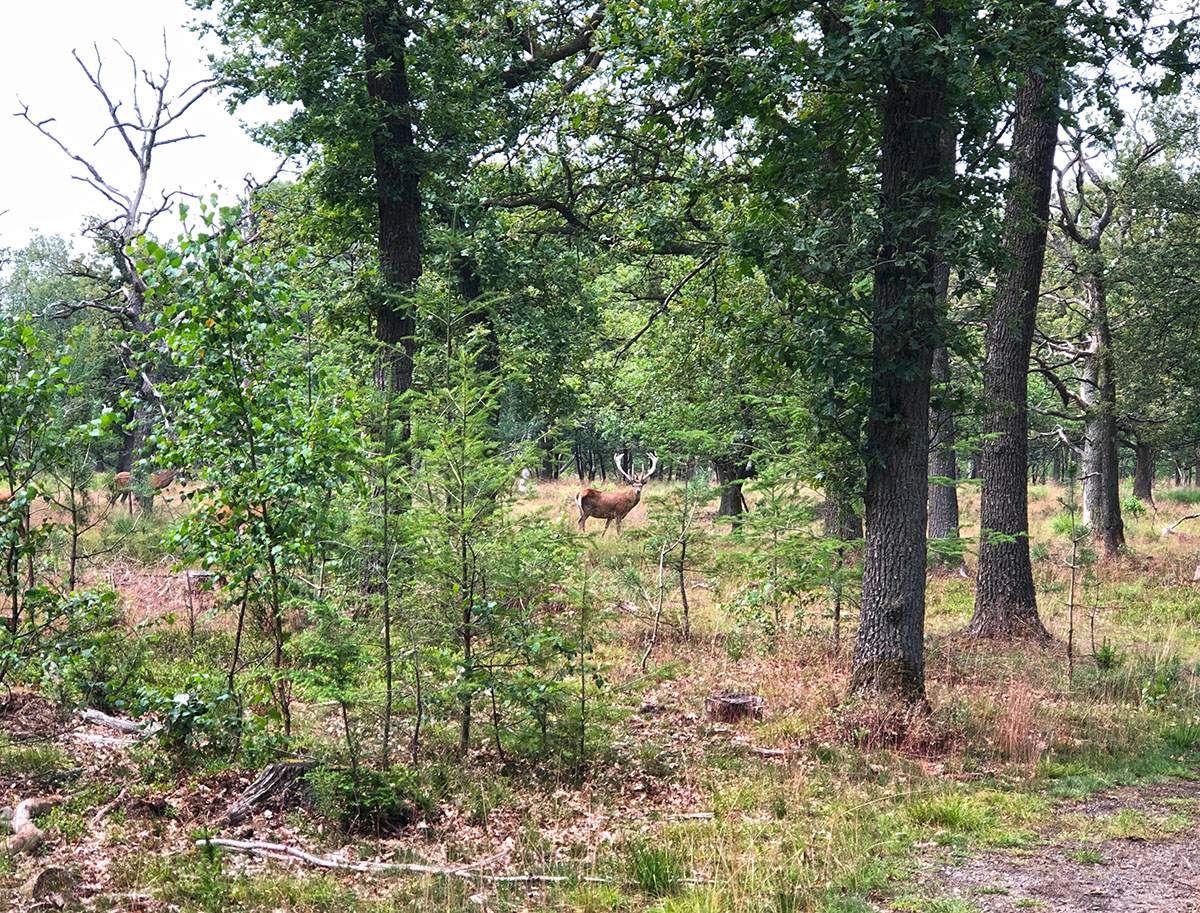 There are also a number of fixed places to spot wildlife in the park. You will find an large place for wildlife viewing just outside the renewed park restaurant (opened in summer 2019) and the along the bike route from the Center to Schaarsbergen is also a place to watch wildlife, indicated by the sign below. The best thing to do is to leave your bike here and then walk the 50 meters to the spotting spot, do not bring your bikes with you to the spot itself. 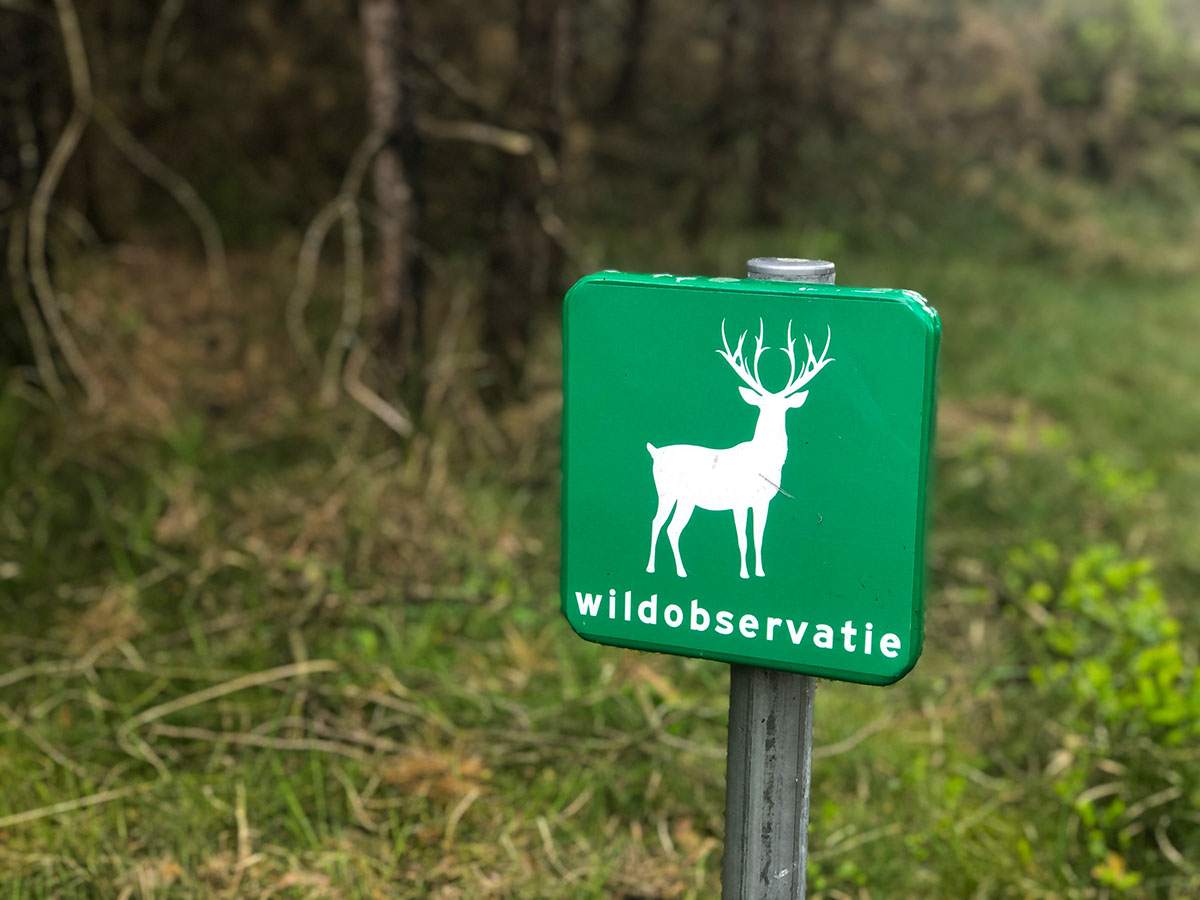 When spotting wildlife in Hoge Veluwe National Park, there is often referred to ‘The Big Four’. They are red deer, roe deer, moufflons and wild boar. Roe deer have the highest number in the park, there are some 300 living in this area. Both moufflons and red deer count some 300 and wild boar are just some 50. 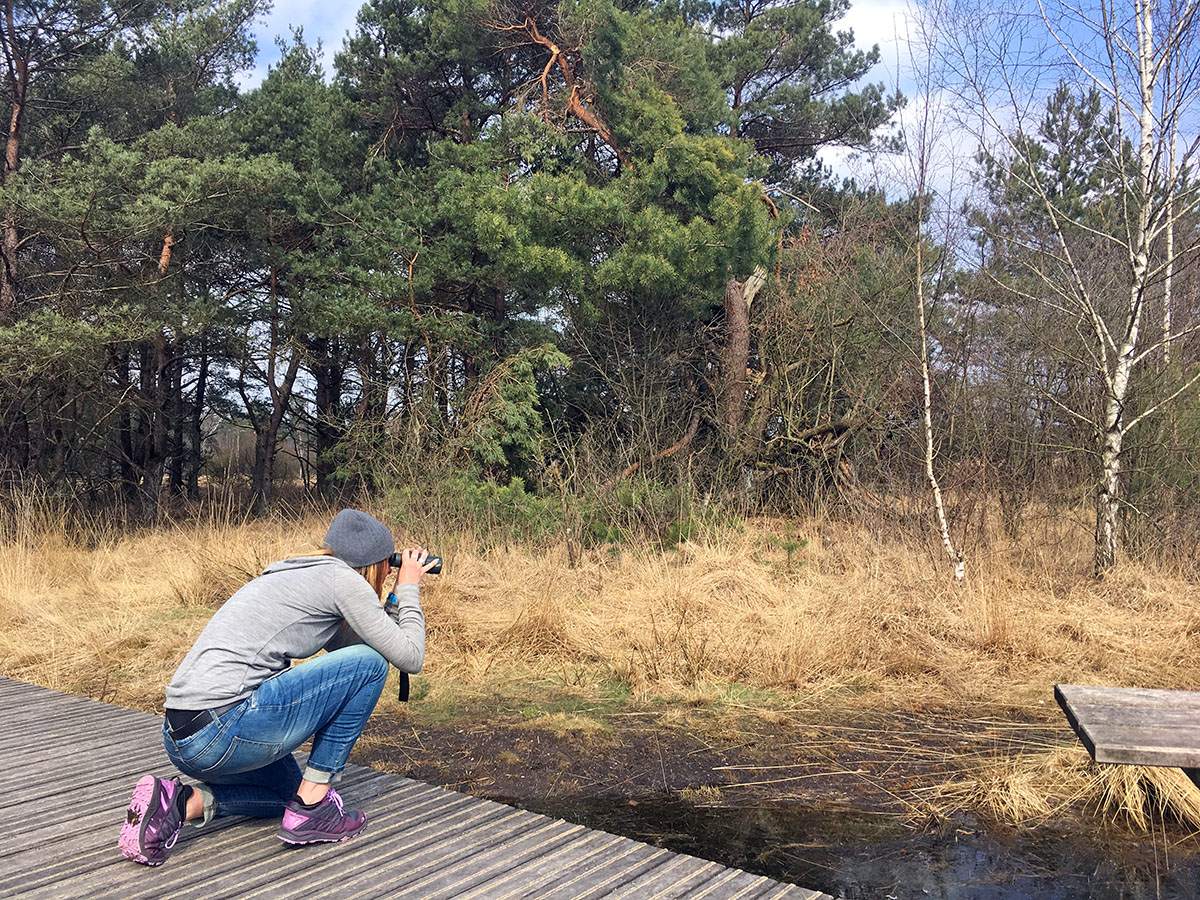 Upon arrival in the national park you can purchase a map at the entrance in Schaarsbergen, Otterlo or Hoenderloo. The cost is € 2,50 only and it contains all roads as well as marked biking and hiking trails. It’s well worth the small investment, especially when you are planning to step away from the beaten paths. You can buy your tickets in advance here.

As I mentioned earlier, I also made a short video form the evening drive that I recently took through the park. Enjoy!

I’d like to end this blog by sharing some tips & tricks for wildlife in Hoge Veluwe National Park. Just because some things need to be said over and over, again:

– Don’t get too close to the wildlife and definitely do not step out of your car when wildlife is close to you. During the video you could see how close we were, right from the car. Some people decided to get out of the car and that really scared the boar, not to mention that they can be quite dangerous when annoyed.

– Some parts of the national park are closed during rutting time. This is always clearly marked and you should definitely stick to the areas that are indicated which you can enter.

– Loud noise scares wildlife away. So please no loud radios in your car, no beatbox along on the bike (trust me, I’ve seen that happen, no joke!) and no yelling, either. The more quiet you are, the easier it will be to see wildlife.

– Don’t trash the park. It seems logic however I’ll tell you about something that happened quite recently. I was viewing wildlife from my car and a big group of wild boar was right next to the car. Behind me, a group of men got out of their huge truck. They were wearing camouflage clothes and a large camera and I expected them to know their business. However, the first thing one of them did once he stepped out of the car was throw a cigarette butt on the road. Unfortunately, once again I’m not kidding. 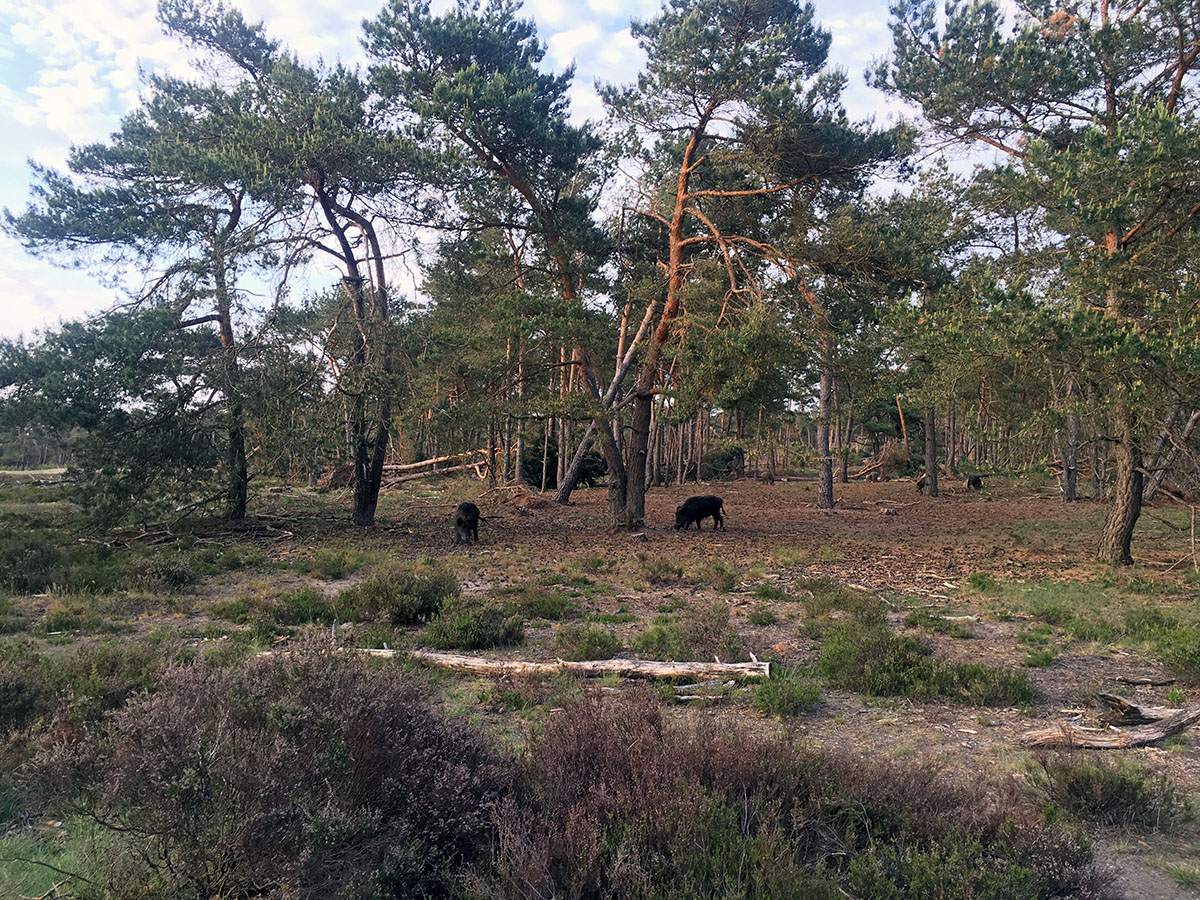 Don’t want to go home anymore after watching wildlife in Hoge Veluwe National Park? There are plenty of options for overnighting near Hoge Veluwe National Park. Inside the park you have the option to overnight on the nature camping near Hoenderloo. Around the park there are plenty of commercial campsites as well as various hotels, bed and breakfasts, holiday parks and more. Summer tends to be the busiest season and more quiet alternatives are Oosterbeek and Wolfheze. Check all possibilities and availability here.

Want to read more? You may also enjoy the following posts I wrote about micro adventure in The Netherlands, you can find them here.