Google ‘Capri’ and you will see beautiful pictures from an island surrounded by turquoise waters and colorful houses built against a dramatically steep mountain. Yes, when my sister and I went to Naples in Italy for a weekend last winter, we knew idyllic Capri was going to be one of the places we really wanted to see. For one day, we’d dive into the world of the jetsetters who spend their vacations her … If only we had known what Capri is really like in wintertime.

Capri is located in the Golfo di Napoli (Gulf of Naples) and is just a short trip away from Naples. As we are not your typical city-trippers, we usually like to explore a bit more on the outside of a city and do some nice activities. After spending an afternoon in Naples on the day of our arrival in Italy, we knew this wasn’t our city and we wanted to get out as soon as possible. While reading our Lonely Planet, we figured we might as well head over to Capri. The weather looked promising and since it was only February, the idea of gallivanting around a Mediterranean Island for a couple of hours, sounded like a great idea.

We took a ferry (Caremar) from the port of Napoli to the island and within 75 minutes we arrived in what we thought would be our paradise for a day. As we entered the island after a smooth sailing, we decided not to immediately board another boat to the Blue Grotto but instead first have a cup of tea instead. The weather still looked pretty good at that point and we figured that there would be no harm in returning 30 minutes later. As we sat down in the only bar that was open around the harbor side, we immediately noticed things work differently around here. The service was poor, the seating was limited and the bar was cold, even though it was in the middle of winter. As soon as we finished our tea and cakes, we were urged to leave to make room for the next people in need of a drink. The huge bill for just two tea and cakes wasn’t the best start of the day, but we knew it was going to be like this. As we made our way over from the bar to the booth of the only company operating winter cruises to the Blue Grotto, we saw a boat with tourists coming back. They didn’t look too happy and as we arrived at the booth, the lady behind the glass told us “no more tours today”. As it turned out, the waves were too strong and the people on the boat got really sick. We were quite disappointed because we had been looking forward to it a lot, but also knew there was a reasonable chance it would get canceled because of weather conditions. 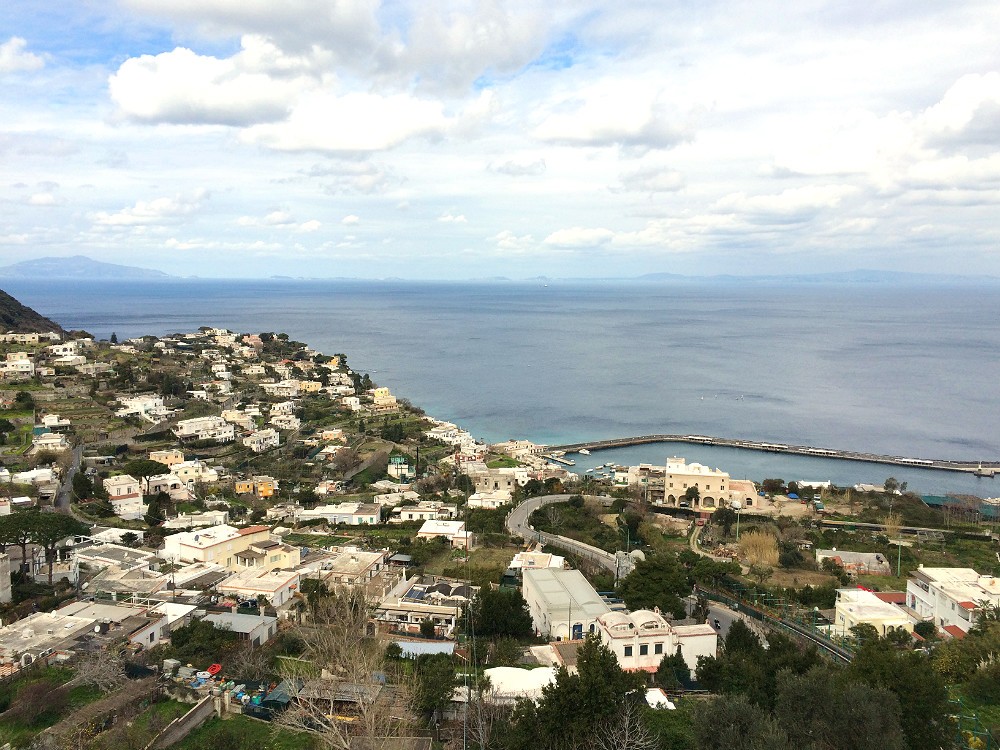 So instead, we decided to catch a ride up to Capri Town, the main settlement on the island. The busfare was everything but cheap, but we didn’t want to waste too much time since we already noticed dark clouds coming in. We walked around the Piazza Umberto, the central square and enjoyed some of the views in the distance. There were quite a lot of other tourists but they didn’t bother us, as this seems to be the way it is on islands like these. After taking a bunch of pictures, we decided to go for a little walk, before it would start to rain. We soon noticed that basically everything was closed in town. No shops were open, most bars were closed for the season and even some museums had closed their doors. We finished our walking tour of the city within minutes, as soon as we left the piazza, we were the only ones in the narrow streets. Although wandering through the narrow streets of Capri may sound very sophisticated, it was everything but that, we found it rather depressing. No life, no bustle, just everything closed and nobody else around. 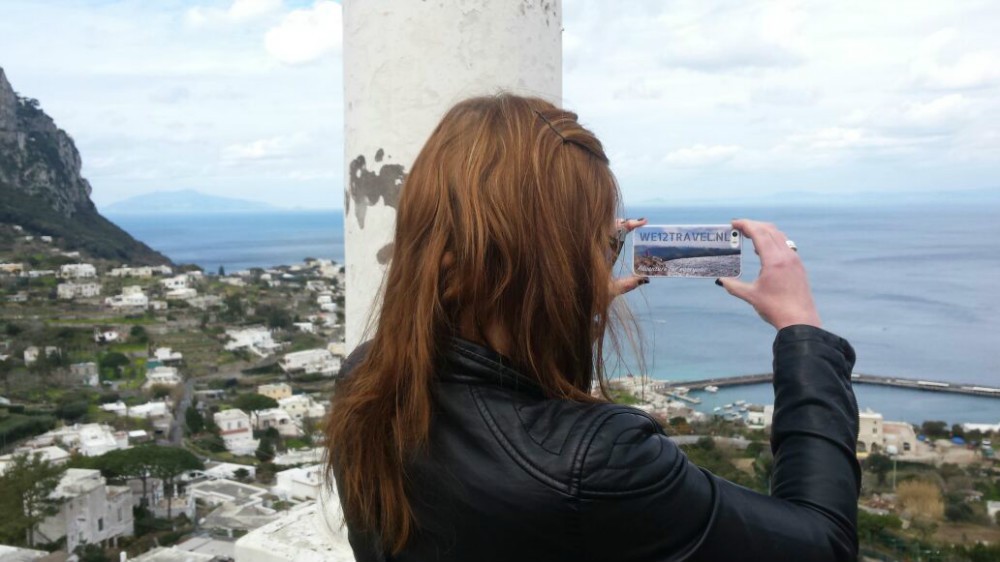 It was then when we realized we had made a mistake coming here in wintertime. As the clouds were closing in on us above our heads, we decided to make one of the walks recommended in Lonely Planet, from Anacapri to Belvedere di Migliera. We caught the bus from Capri to the town of Anacapri and from here, we started walking. Earlier on I wrote a full blogpost about this hike and even though it was nice, it couldn’t make up for earlier disappointments that day. Here in Anacapri, life seemed to have vanished. We barely saw a soul and everything looked incredibly depressing. The view at the end of the walk was stunning yet the dead rats we found in the park did not impress us. It started to rain and to get cold, but luckily we found a place that had opened up for some lunch. 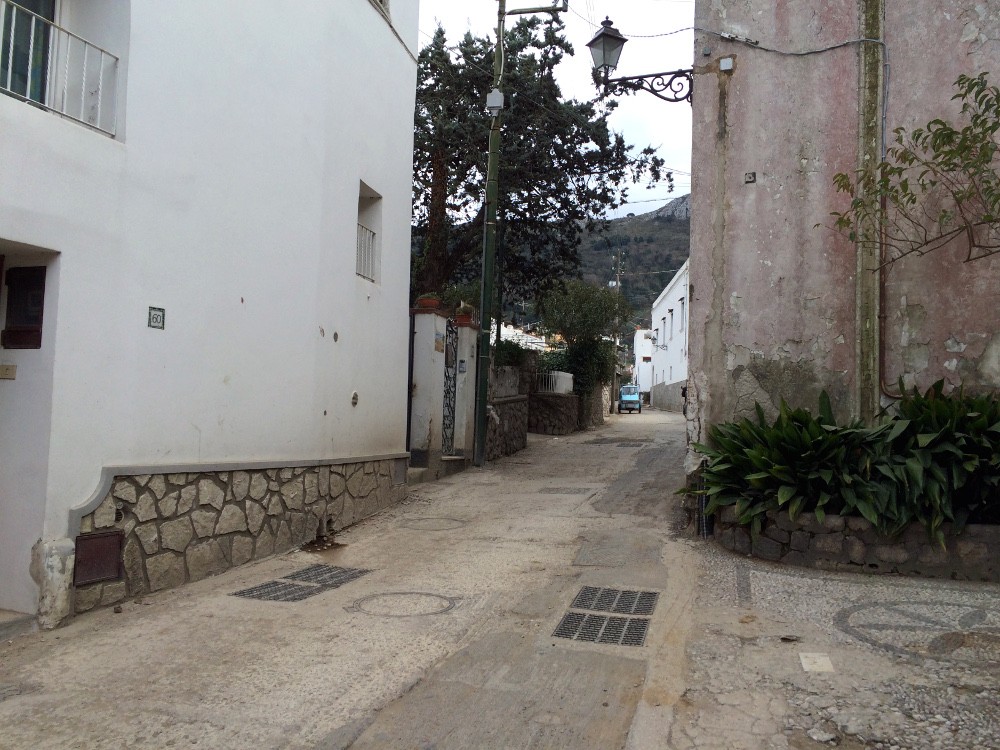 After we explored the silent streets of Anacapri, we decided to take the bus back to Capri Town and see from there what we should do. We still had a couple of hours to waste before our boat would return to Naples but as we arrived in town, it started pouring with rain. One bar was open and everyone gathered there for a coffee, hesitant to order more as prices were insane, once again. In addition, staff was very unfriendly and urging us to move on after we finished our tea. However there wasn’t really anywhere else to go because everything was closed, we spent a small fortune on tea in just an hour and a half. When it was about time to head back down to the harbor, we decided to walk down instead of take the bus again, to save some money as we’d already been spending way too much.

As we hopped back onto the ferry, I wasn’t sad at all to leave the island of Capri behind. I’m sure that in summertime it’s very idyllic and stylish, however all of the stories above, including the outrageous prices for food and drinks as well as the rude staff in bars and cafes, left us utterly disappointed about Capri. Not only did we not see what we came for (pouring rain instead of sun, empty streets instead of the Blue Grotto) but we spent a small fortune on a day that, looking back on it, would better have been spent another way.

If you are still considering going to Capri in the winter, here are some things to consider:

– Weather is very changeable. We had sun in Naples in the morning and upon arrival on the island, which made the temperature very pleasant, however when the sun disappeared and the rain started to pour, it got extremely cold.
– Expect to pay up for your drinks and food. Although this is to be expected, we had hoped at least for some kind of service, however, that seemed to be out of the question.
– Bring your own food and drinks if you can. We didn’t see any supermarkets (although I’m sure they are there in the summer) nor any small vendors, everything seemed extremely commercial.
– Trips to the Blue Grotto are often canceled because of poor weather, so don’t make this your number one must-see. If you go, take seasickness pills!

Needless to say, I don’t think we’ll be coming back to Capri. I’m sure it’s nice in summer when it’s hot and sunny and everything is coming to life. However, in winter it’s just very depressing and what set us off most, was meeting nothing but rude

Have you been to Capri? If yes, how were your experiences?

Want to read more? You may also like these:
– City-break Naples in pictures
– Climbing Paternkofel in the Dolomites
– How not to photograph the Northern Lights