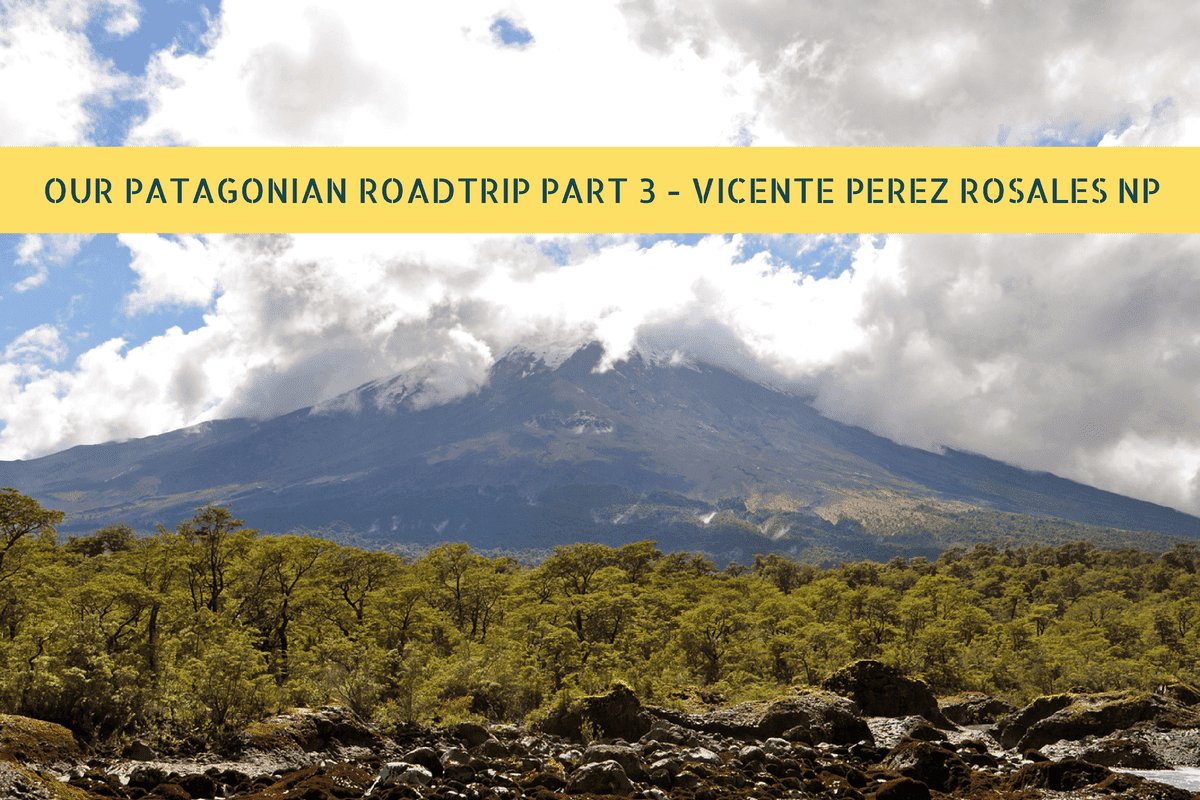 The second half of our day in Vicente Perez Rosales National Park makes us discover the (now) silent side of this park. However, being part of the famous Lake Crossing, we learned it’s not always like this and during the high season touring cars loaded with tourists stop here for the boat / bus trip to the other side of the Andes Mountains in Argentina. However, as it’s late in the afternoon already we are lucky and have parts of the park entirely for ourselves.

After exploring the Petrohue Falls and River, it’s time to make our way to our accommodation for the night. However, since it’s finally clearing up and the sun is shining, we are hoping to see the mighty Osorno volcano out of the clouds. This masterpiece can already be seen when driving down from Puerto Montt to Puerto Varas but when we drove that earlier that day, a thick pack of clouds was all we got to see… 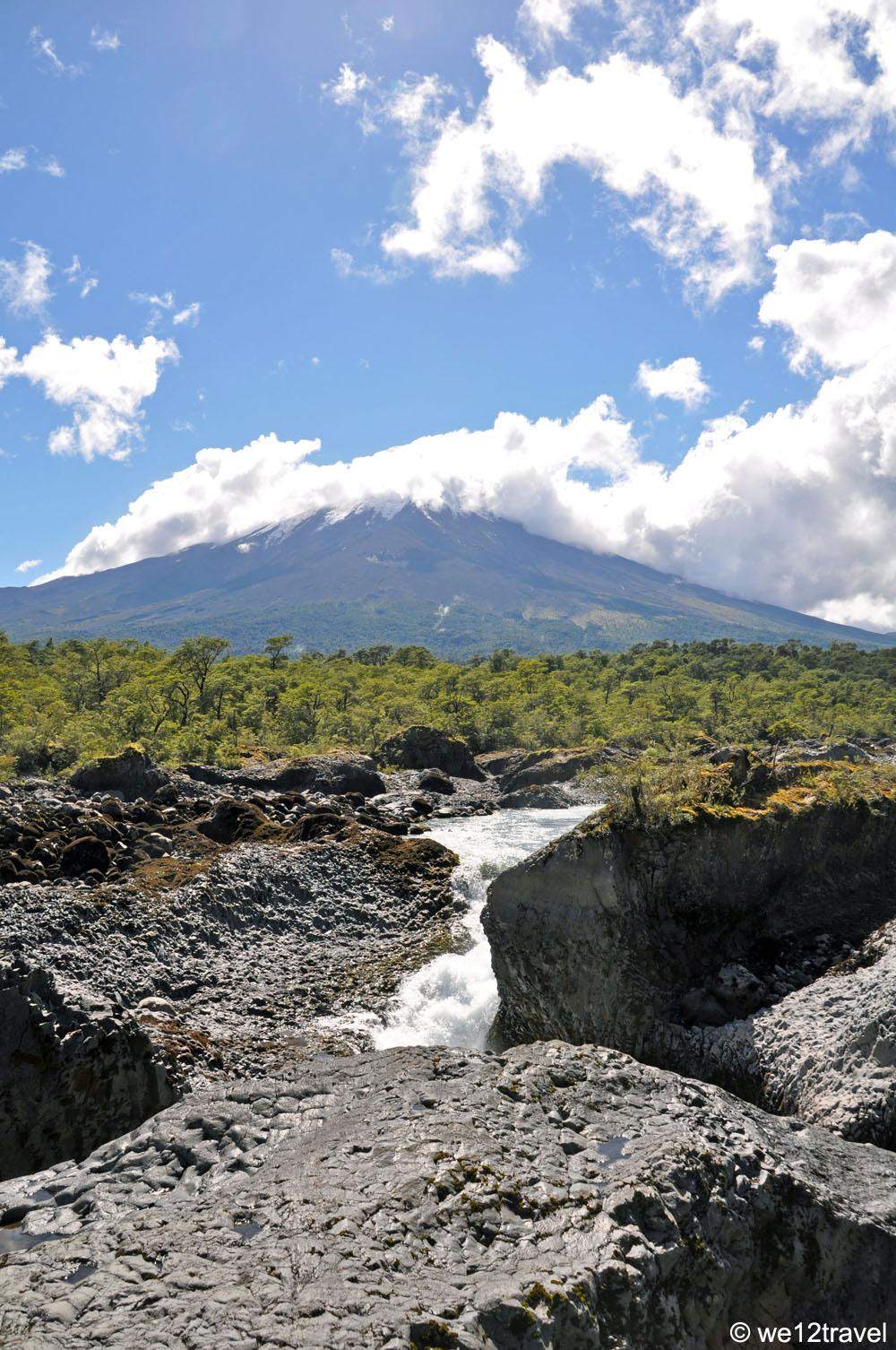 Upon arrival back at the car we watch up into the sky and see … Osorno covered in clouds. Still! Darn! The clouds are moving swiftly so we decide to wait for a bit to see if they clear up. But instead of getting less, they seem to get thicker. Osorno seems to create its own weather and isn’t willing to show itself to us today. Oh well, time to head off to our hotel, we’ll have plenty more chances of seeing Osorno out of the clouds later on during our trip.

The dirt road to the small settlement of Petrohue is leading us to the shores of Lago Todos los Santos. Our stay for the night is Hotel Petrohue, an impressive wooden building located on the hillside. It’s pretty quiet and we can’t help but feel like we’ve checked into the Overlook Hotel (the one from The Shining) for just a split second. The view from our room is stunning, we have a 180 degree view of the lake and the mountains at the back. 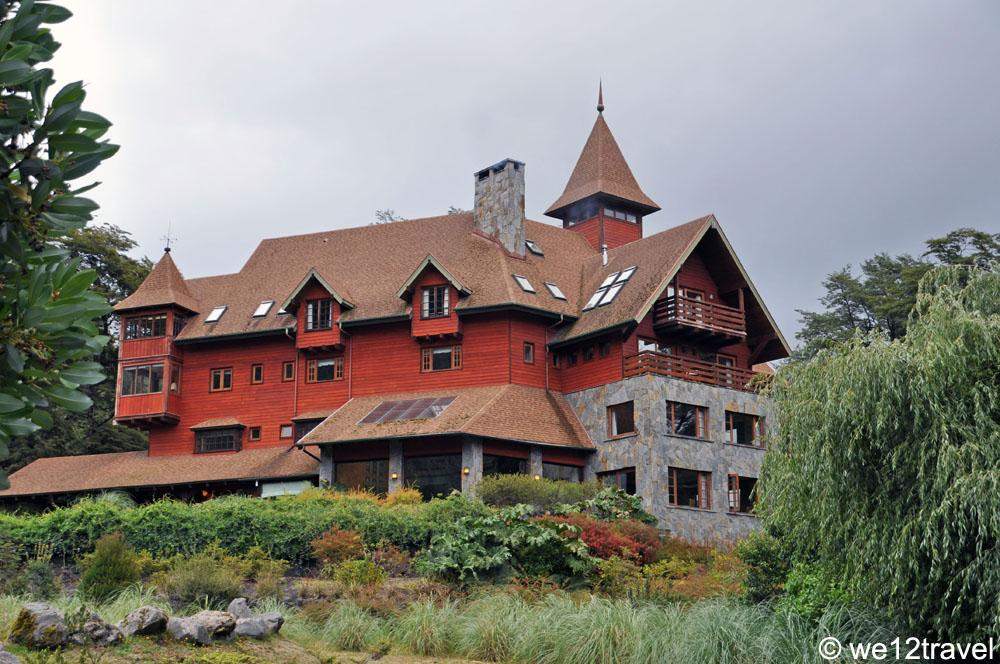 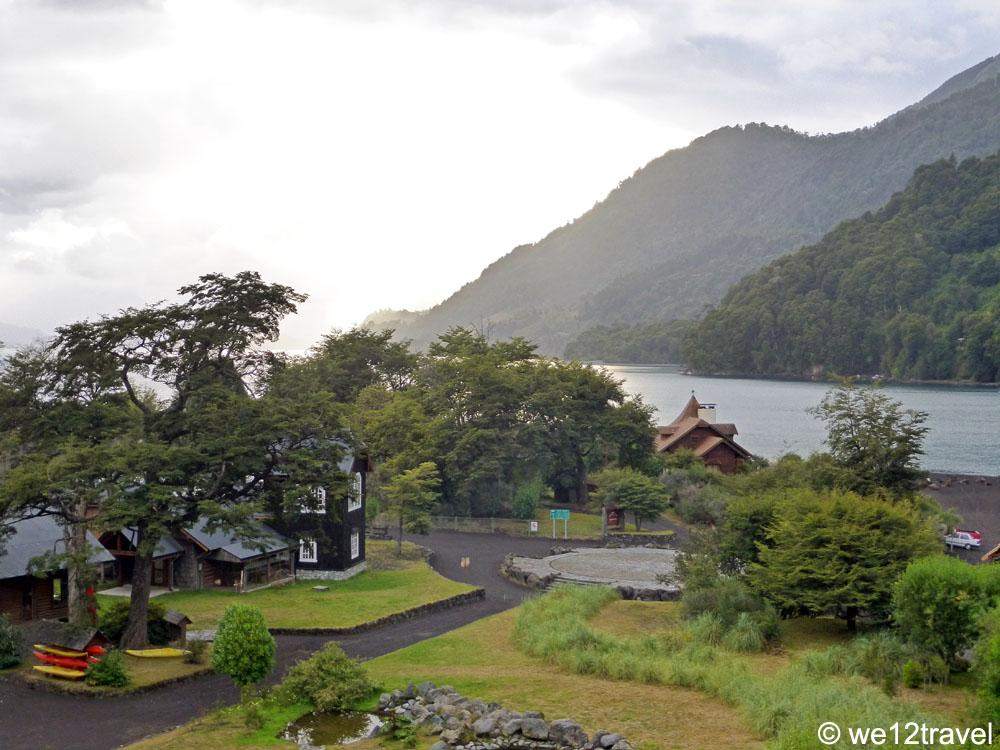 We decide to take another walk before dinner is served and make our way to the small Visitors Center hosted by CONAF. Unfortunately, it turns out there are no short hiking trails from town so instead the warden advises us to take a walk along the banks of the lake. Sounds like a plan. 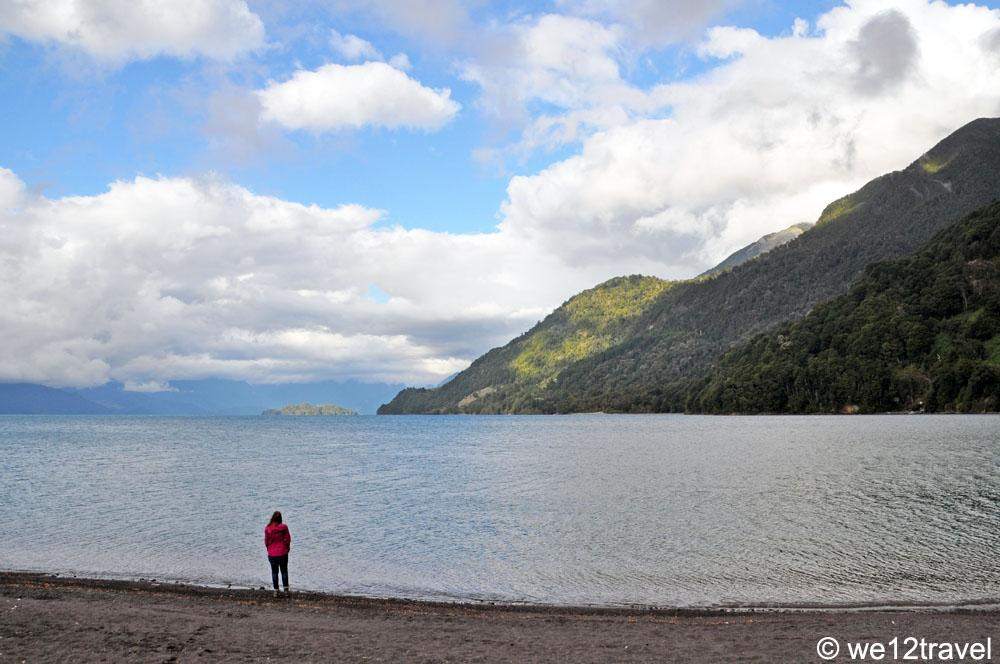 While the sun lowers itself over the land it is nothing but quiet here. We stare in awe at the mountains in the distance at the other end of Lago Todos los Santos. There’s the border with Argentina, a border we will cross later on in our journey. Along the lake is a small campsite and a father and son have just returned from a kayaking trip. It’s hard to imagine how this place must have looked like back in 1869 when Osorno erupted for the last time… 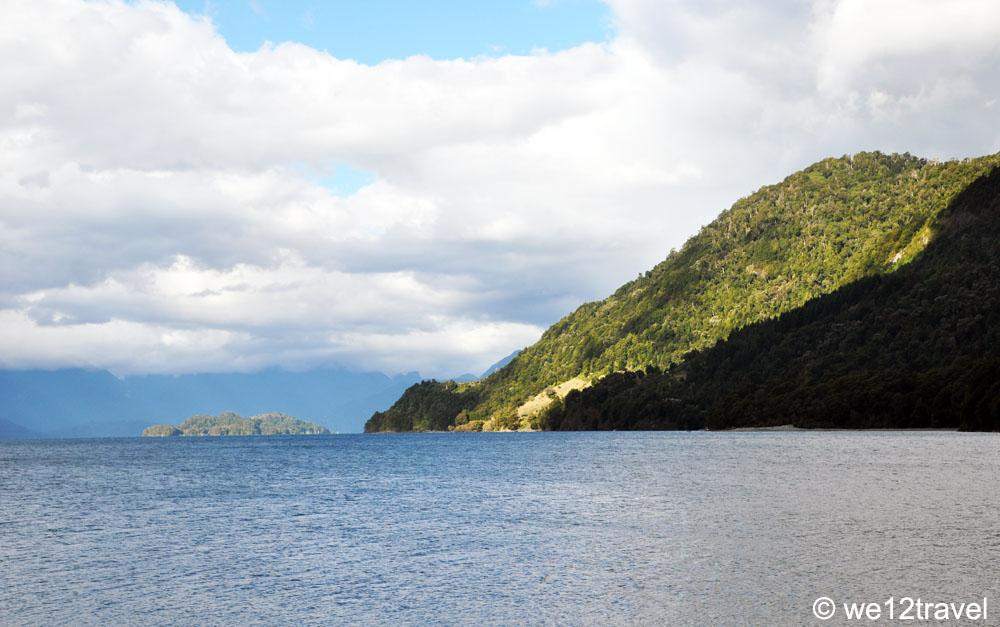 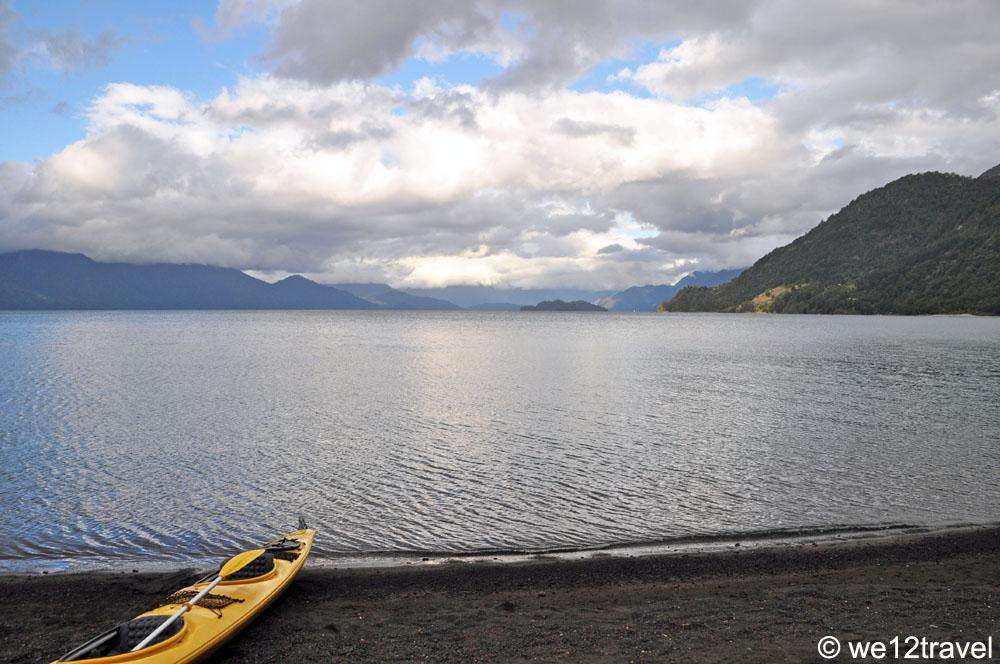 As it turns out, it’s berry picking season. The bushes along the shores are in full bloom and we pick ripe blackberries. We sit down, staring in the distance and slowly see the sun fade behind the mountains. It’s time to head back to the hotel where dinner will be served shortly. Our first Patagonian dinner is a chicken and corn pastry, very tasty and filling. After emptying a bottle of wine and sharing some pictures on Facebook (yes, the hotel has wifi!) it’s time to roll into bed. Despite not seeing Osorno out of the clouds, it still was a great day out. Vicente Perez Rosales National Park makes a perfect day trip out of Puerto Varas or Puerto Montt…

Some suggestions for planning your trip:
– If you want to stay in Petrohue, there’s  a few options. You can camp along the lake and there are a couple of guesthouses on the opposite side of the river, however Lonely Planet isn’t very positive about them. Your best bet is to stay at Hotel Petrohue, however for the average traveler it may be on the expensive side.

– If the weather is good, you may also drive up to the slopes of Osorno. Since we had little time available and did not have the best weather, we decided not to. However it’s a must if you get the chance!

– Bring cash to pay the entrance to Petrohue Falls. It’s a small fee only however at the time we were there, it was only possible to pay by cash. Other sectors of the park also ask a small entrance fee, however there is no main fee to pay.

– While we were there (March 2014) a brand new visitors centre was being worked on at the Petrohue Falls. It was looking very impressive already and it should be finished by the end of the year, at least that’s what we were told.

– For a truly unique Patagonian experience or for those who travel without a car, you can do the Lake Crossing to Argentina. We heard nothing but awesome stories about it. However since we were traveling with a car we did not try this. 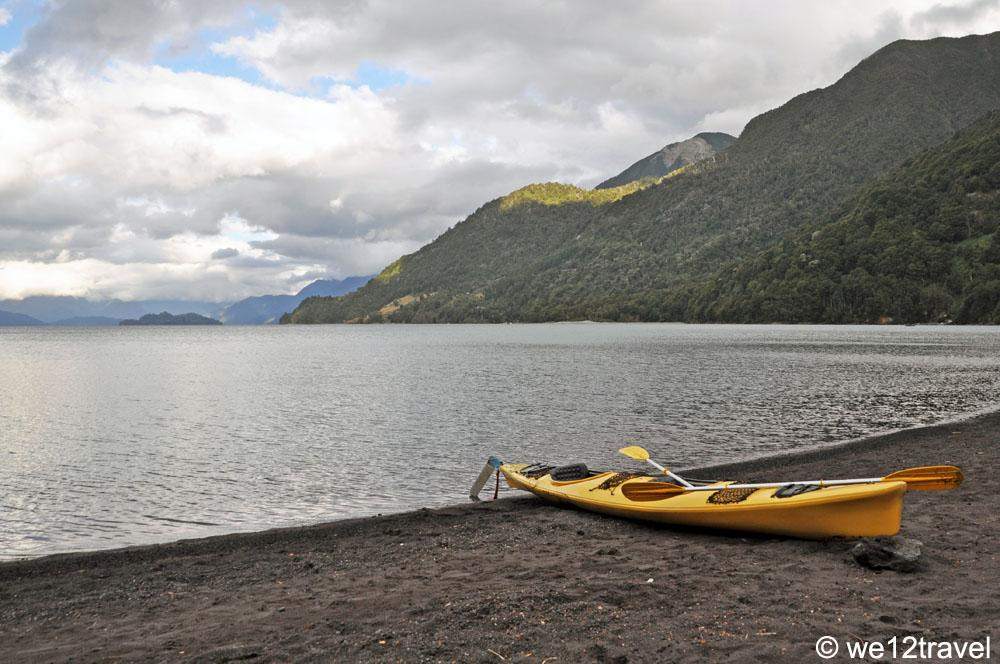 Disclaimer: we were guests of Hotel Petrohue, however as always the opinions in this article are entirely our own.

Next up: off to Cochamó, aka the Yosemite of Chile!

Previously on our Patagonia roadtrip series:
– The Petrohue River and Petrohue Falls
– Our Patagonian Roadtrip: an introduction
– The we12travel Patagonia alphabet