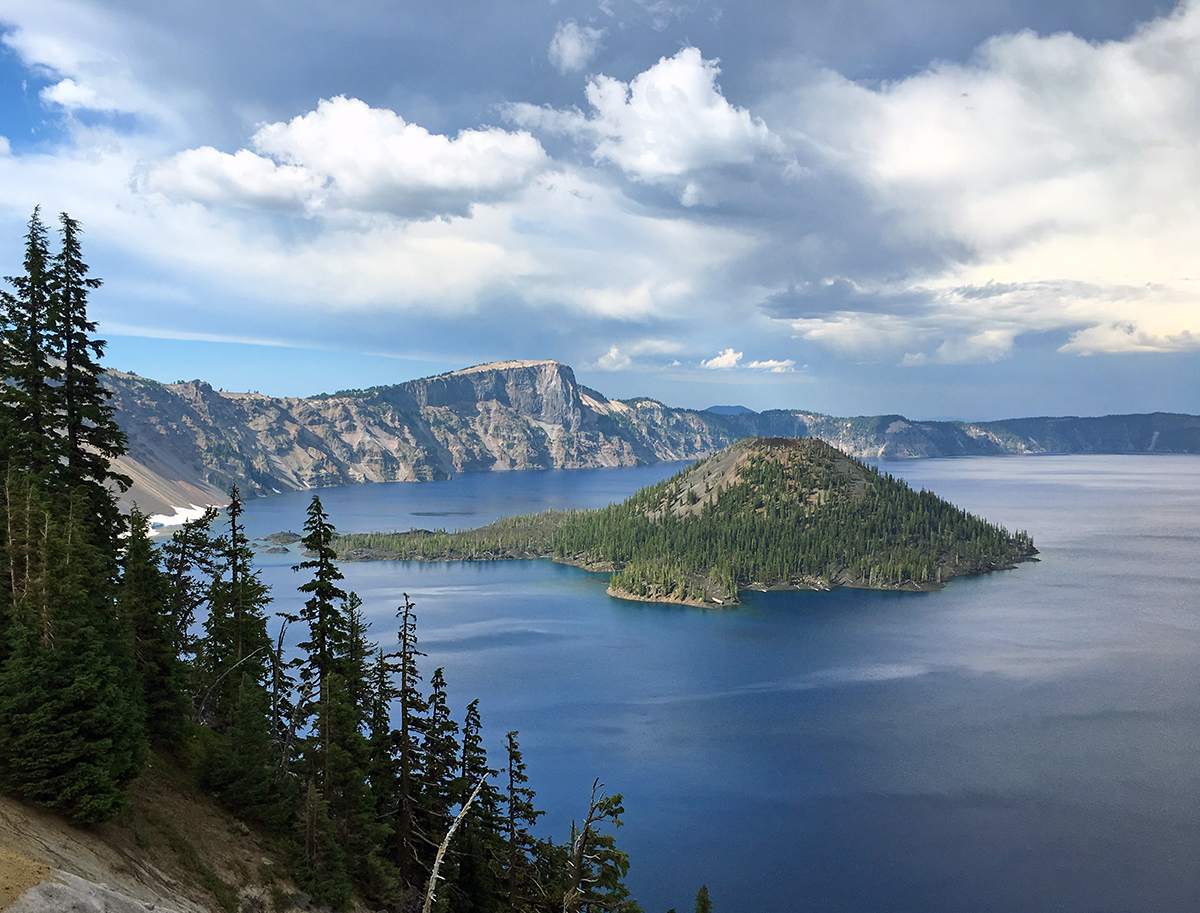 Can you believe I nearly cried when I got my first views over the Rim into the lake? I’m sure that those who have visited Crater Lake in the past may understand what it feels like. This place is so majestic and enormous, it’s hard to explain with words, you’ll just have to see it for yourself. My trip to Crater Lake was one of the most memorable experience I’ve had while traveling in the USA so far and in this blog I’m sharing all you need to know so you can prepare for your visit better than I did. Enjoy my post about Crater Lake National Park!

Before you continue reading, make sure to check out this short video about my visit to the park. It’ll give you a bit of an idea what to expect:

Where is Crater Lake National Park?

One of the questions most often heard is ‘Where is Crater Lake National Park?’ as it’s much lesser known that many other national parks. Crater Lake is located in southern Oregon in the western part of the United States. It’s quite far away from everything (at least, for European standards) and the nearest big city is Portland. Portland to Crater Lake National Park is about a 250 mile or a 4.5 hour drive. I left Portland super early in order to arrive in Crater Lake on time to grab a camp site, however failed hopelessly but more on that later. Smaller towns that are closer by are Klamath Falls (1.5 hrs) and Eugene (2.5 hrs). 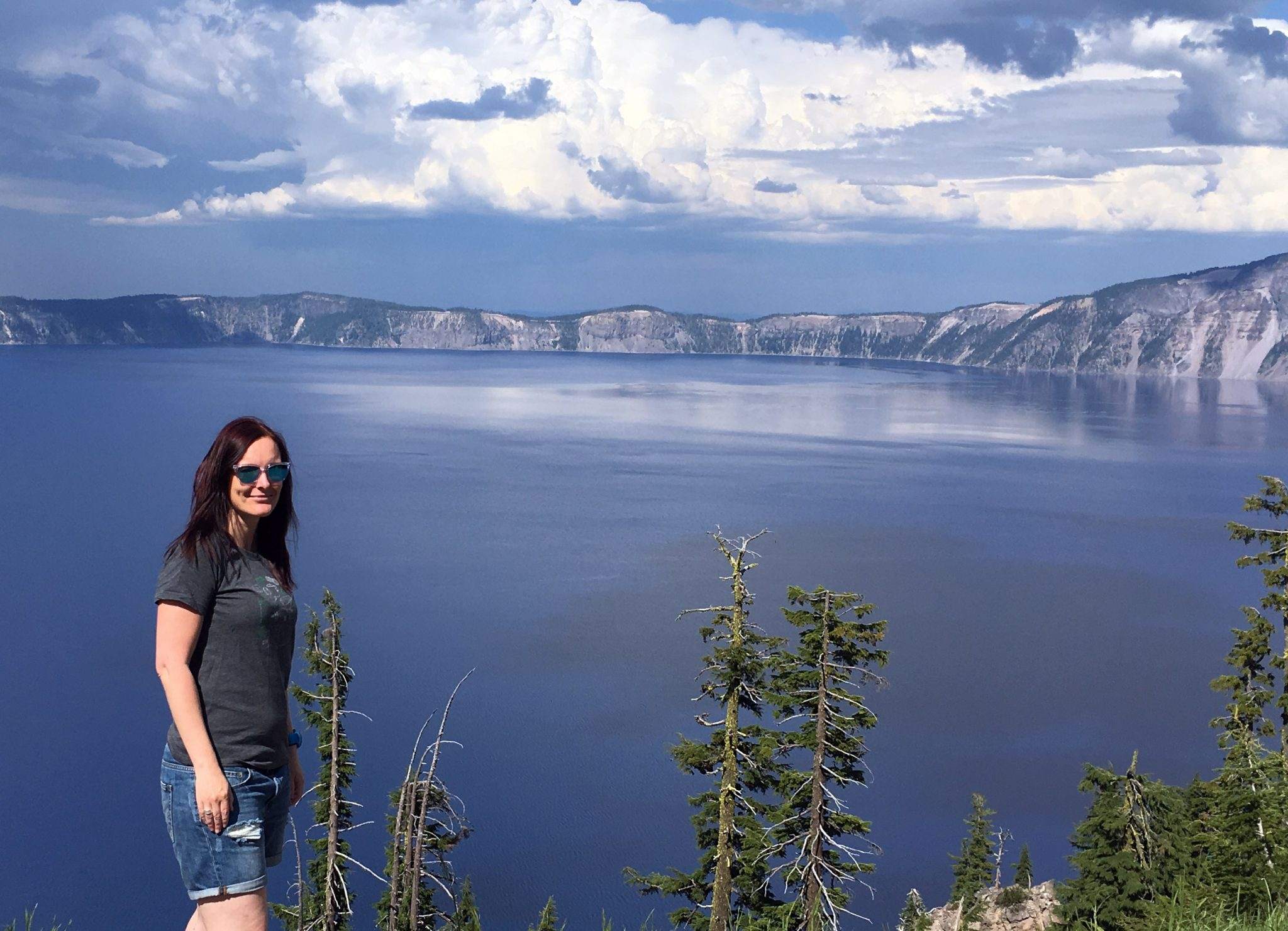 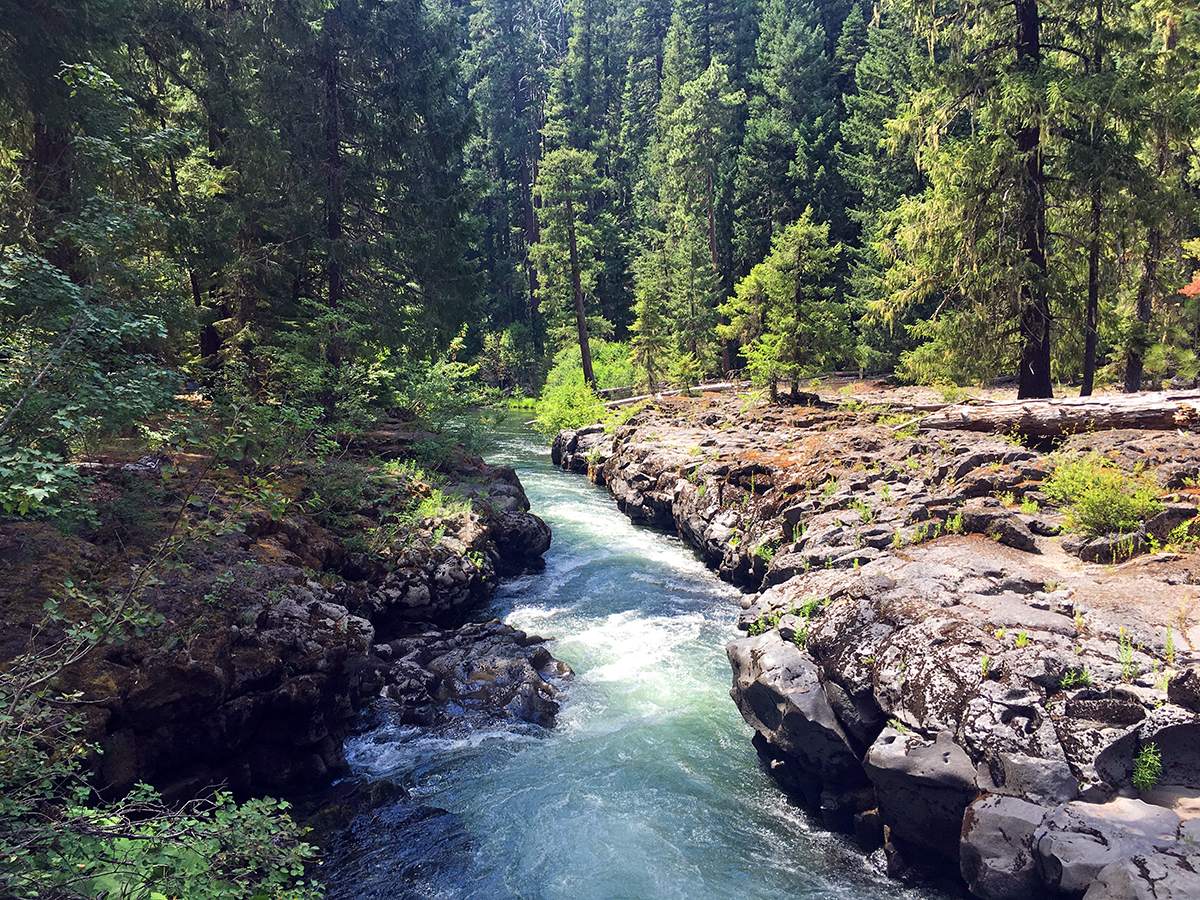 How was Crater Lake formed?

Another question you may ask is ‘how was Crater Lake formed?’ Or better said: how did a mountain become a lake? Because before the massive volcanic eruption, this used to be a mountain peak. This eruption occurred some 7.700 years ago, resulting in the deepest lake in the United States. Some other interesting facts about Crater Lake National Park are: 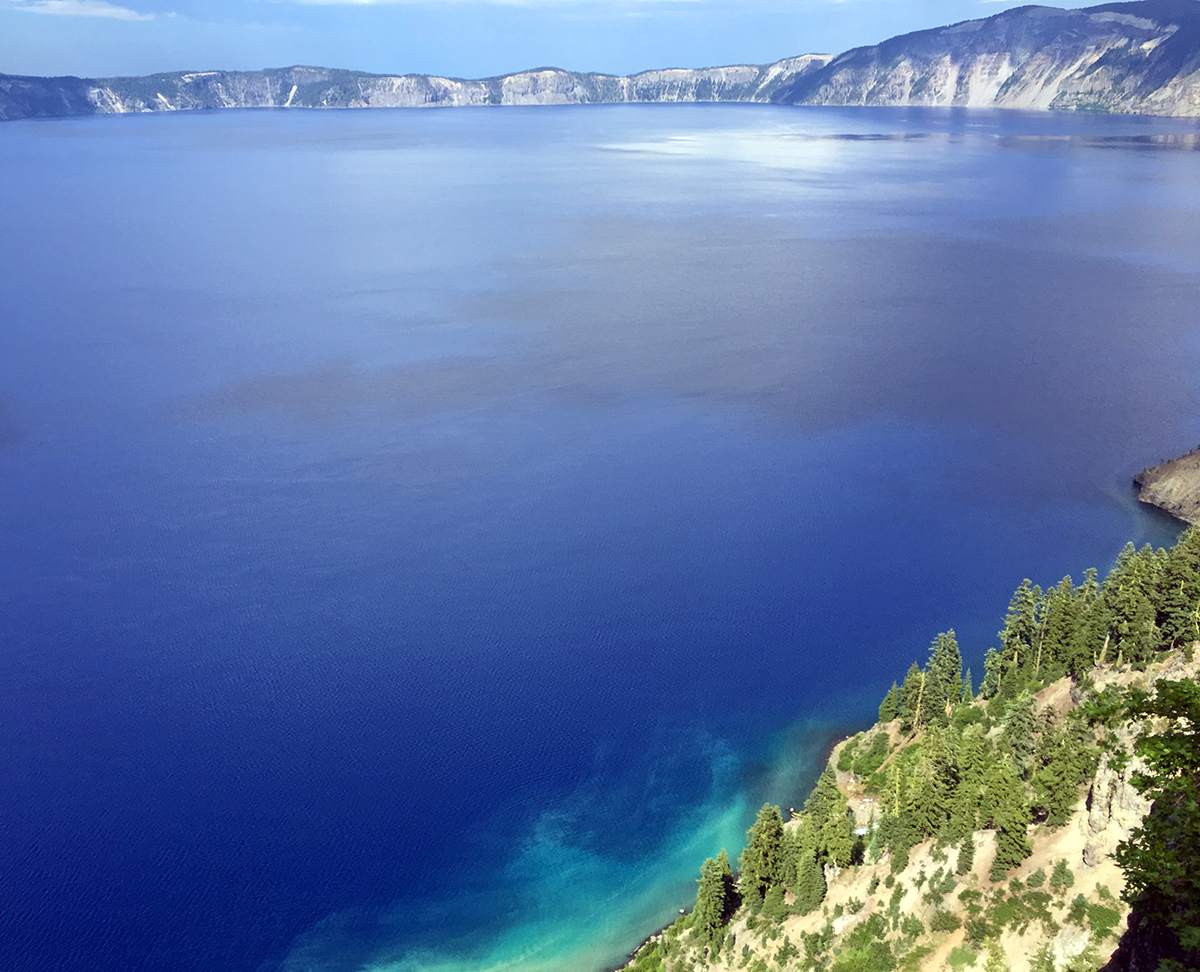 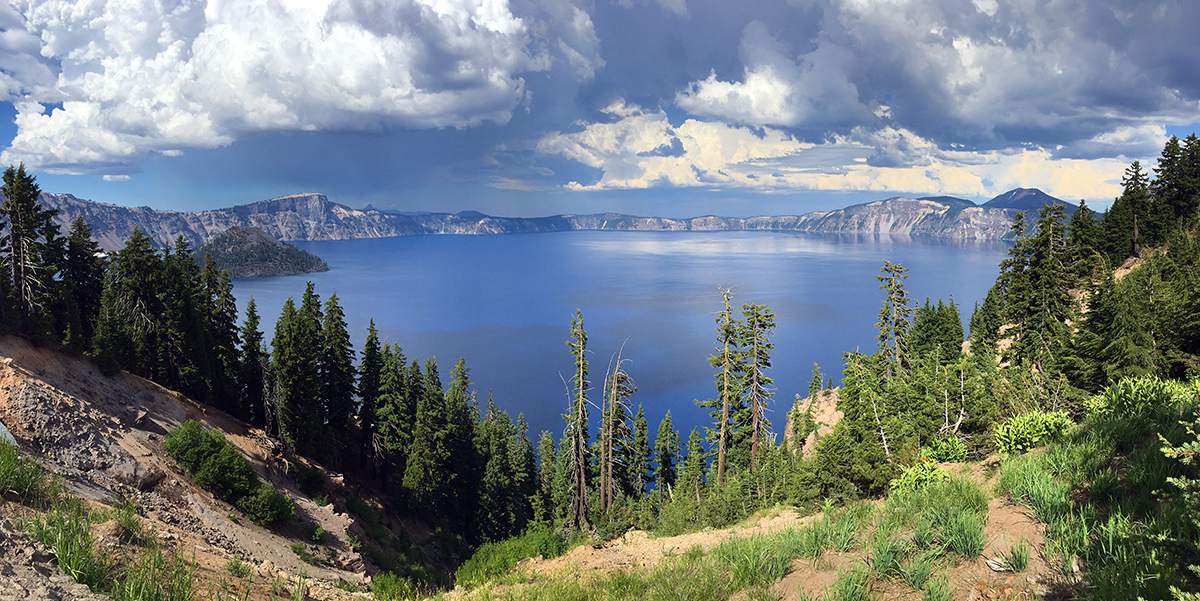 There are two main entrances to Crater Lake National Park. The most important and year round accessible one is the Annie Spring Entrance Station along Highway 62 located in the southwestern part of the park. When coming from Portland to Crater Lake, the easiest access, if open, is the North Entrance. In 2019 the entrance fee to Crater Lake National Park will be USD 25 per vehicle or USD 20 per motorcycle. An annual national park pass can also be used and will give you access to all US national parks at just USD 50 per person so is well worth the money if you plan on visiting other US National Parks on your trip. 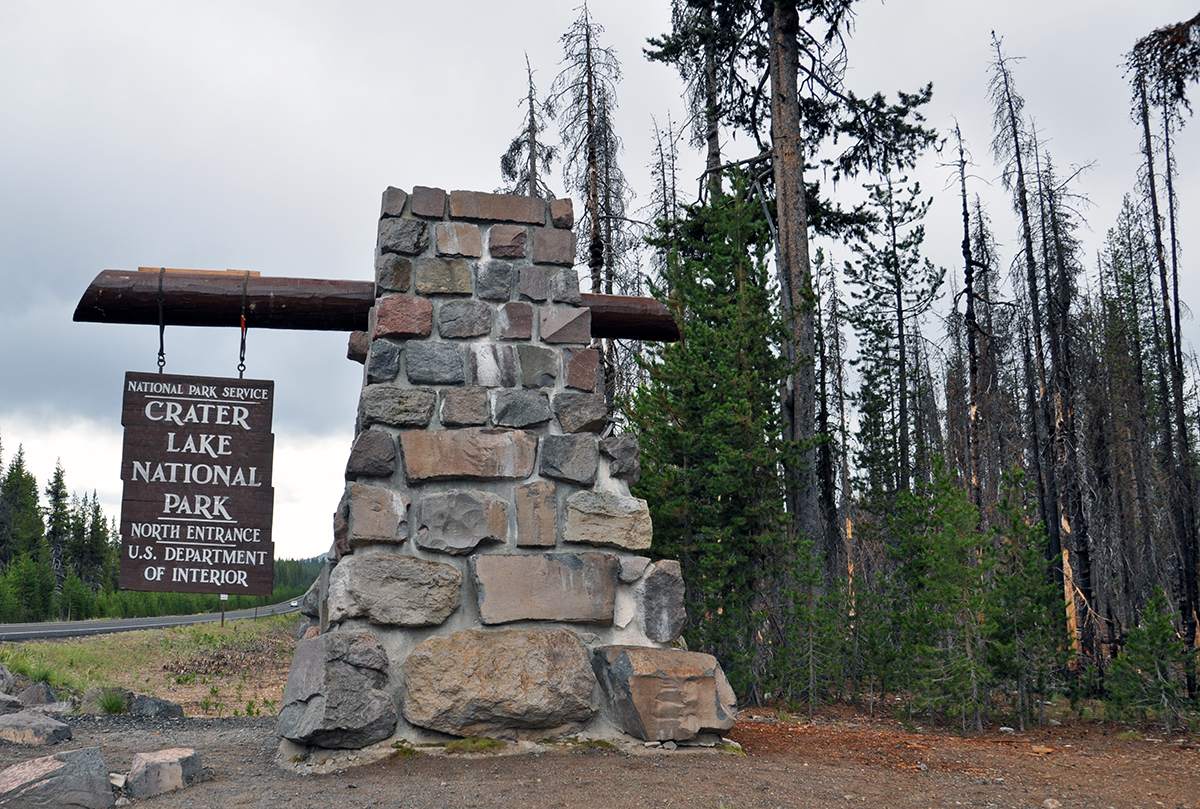 Crater Lake National Park is open year round, however not always easily accessible. Due to its high altitude, some roads, facilities and trails are closed during periods of snow falls. For your information: I visited late July and there still as plenty of snow left in certain places. The later in the season you go, the easier it will be to get to Crater Lake National Park.

Things to do at Crater Lake National Park

The Rim Drive in Crater Lake is a 33 mile road that encircles the lake. It’s one of the most scenic byways in the US and offers spectacular views in all directions. The full loop is usually open from early July until to late October. If you plan in just driving it, you can do the whole loop in about an hour. However, when taking stops along the way, count at least 2-3 hours for the drive. There are some 30 scenic pullouts along the road and various information panels. Some of the most scenic stops along the Rim Drive include: 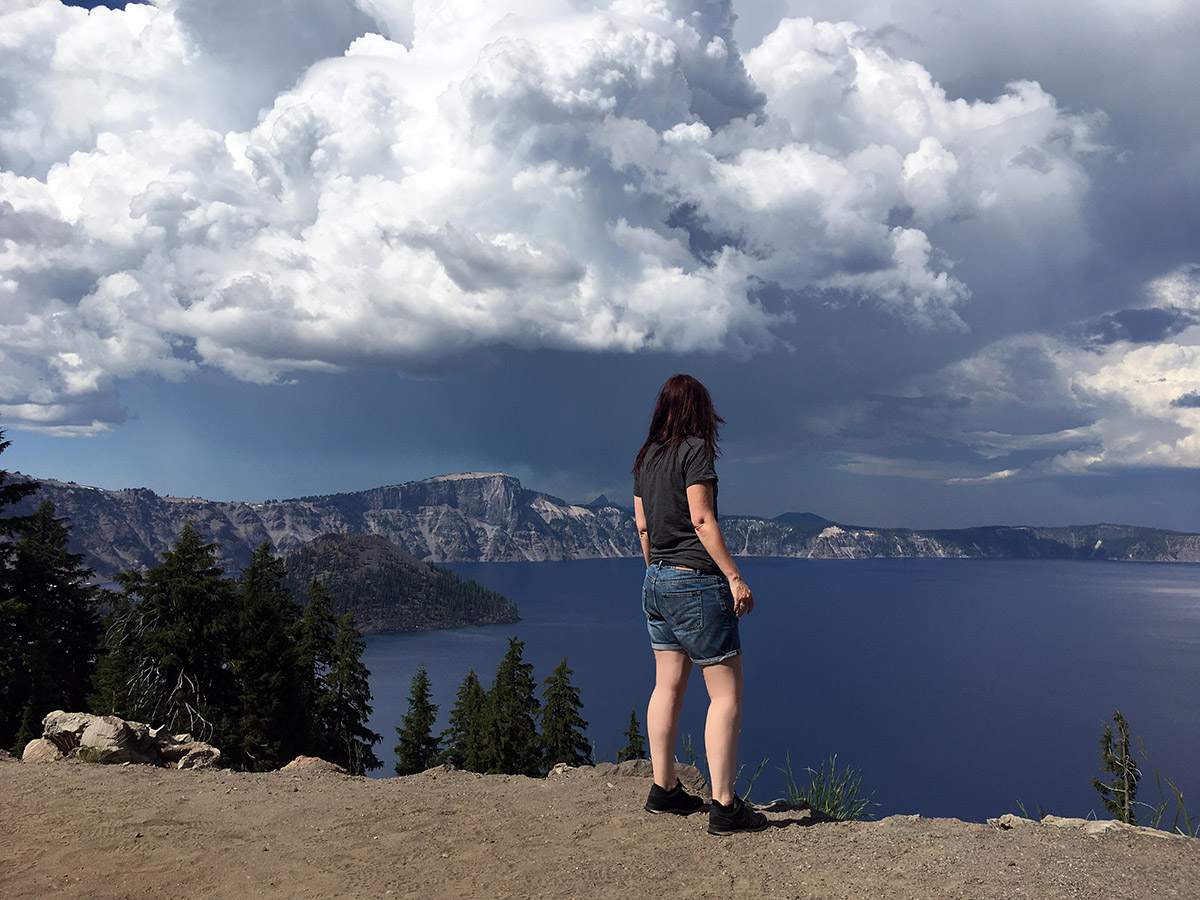 Crater Lake offers some amazing hiking trails however keep in mind that many will be closed well until late July because of snow. My main goal was to hike to the summit of Mount Scott, the highest point in the park, but I was advised not to as there was still snow on the track. Same was for Garfield Peak which is closed to the Rim. Eventually I ended up doing three different hikes during my stay. For a full overview of hiking trails in Crater Lake and a Crater Lake hiking map, visit the National Park website.

The most amazing hike in Crater Lake National Park that I did was the trail to the summit of Mount Scott. I solo-hiked it despite some people telling me not to. Luckily there was barely any snow left on the trail so it was not as hard as I imagined. However, it still is a long way up and should only be done by fit and experienced hikers. The view from the top is simply awesome! The trail will take you some 3/4 hours and gains 1.250 feet in altitude.

Another great hike is the one to Discovery Point from where you’ll have amazing views on the lake. The trail is 2 miles long and relatively easy. Gold prospector John Wesley Hillman first spotted Crater Lake from here back in 1853.

The last trail I hiked was The Pinnacles. This area is some 6 miles off the Rim Drive but well worth the detour. The Pinnacles are a bunch of fossil fumaroles where volcanic gases once rose up through a layer of volcanic ash, cementing the ash into solid rock, resulting in these bizarre formations. The trail is easy and gets unpaved after a while and you’ll exit the park at some point. From here it’s not really worth continuing though so I turned back the same way. 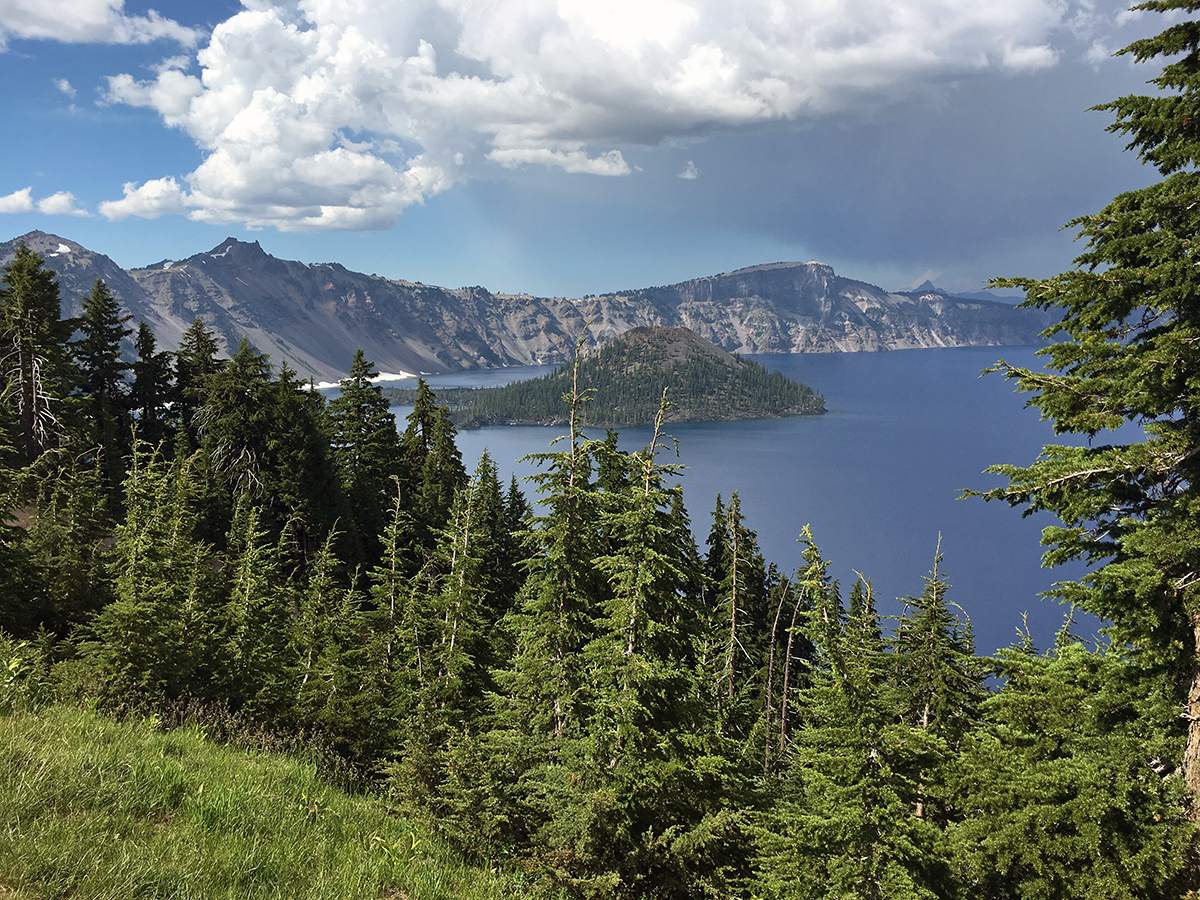 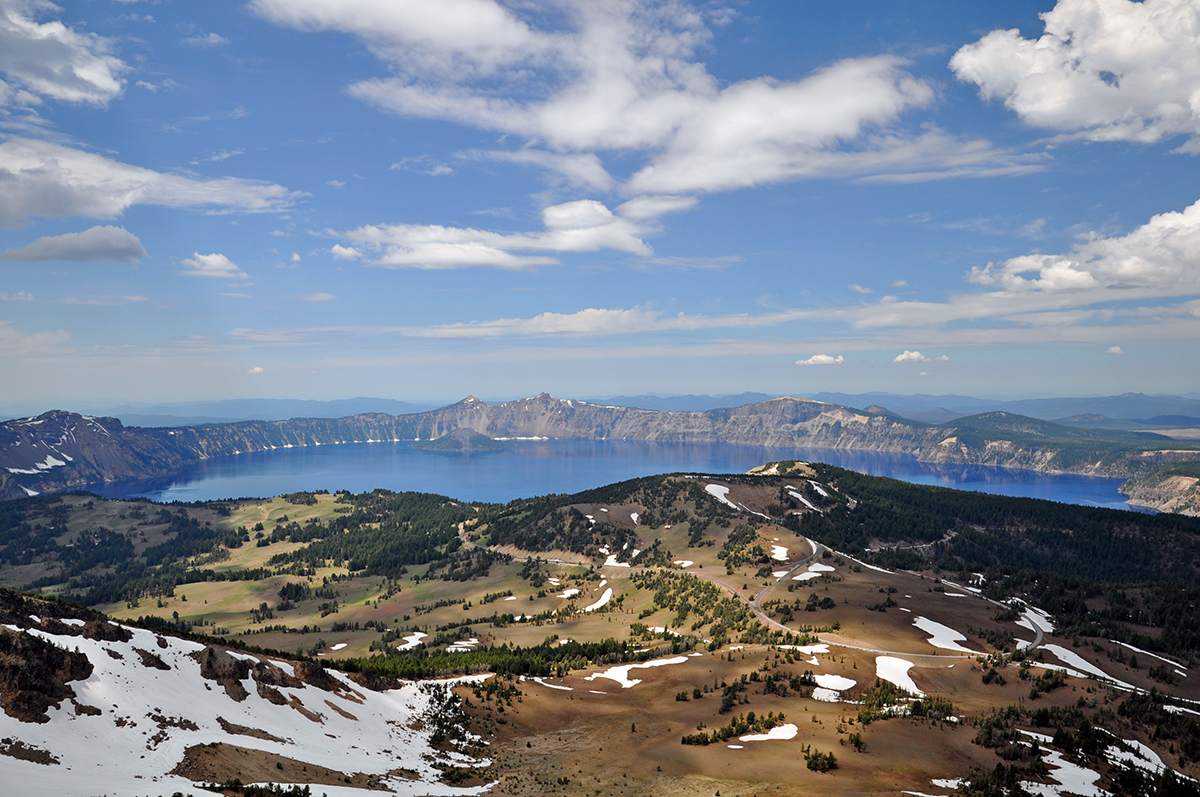 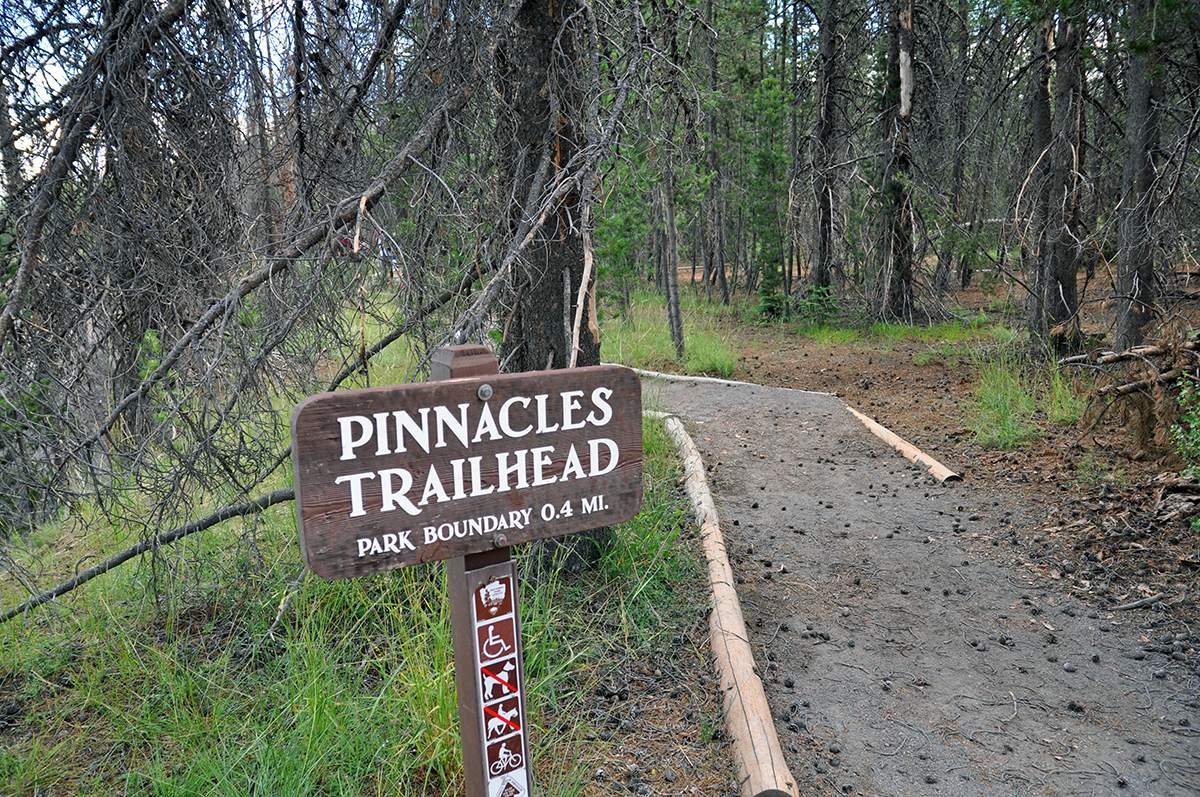 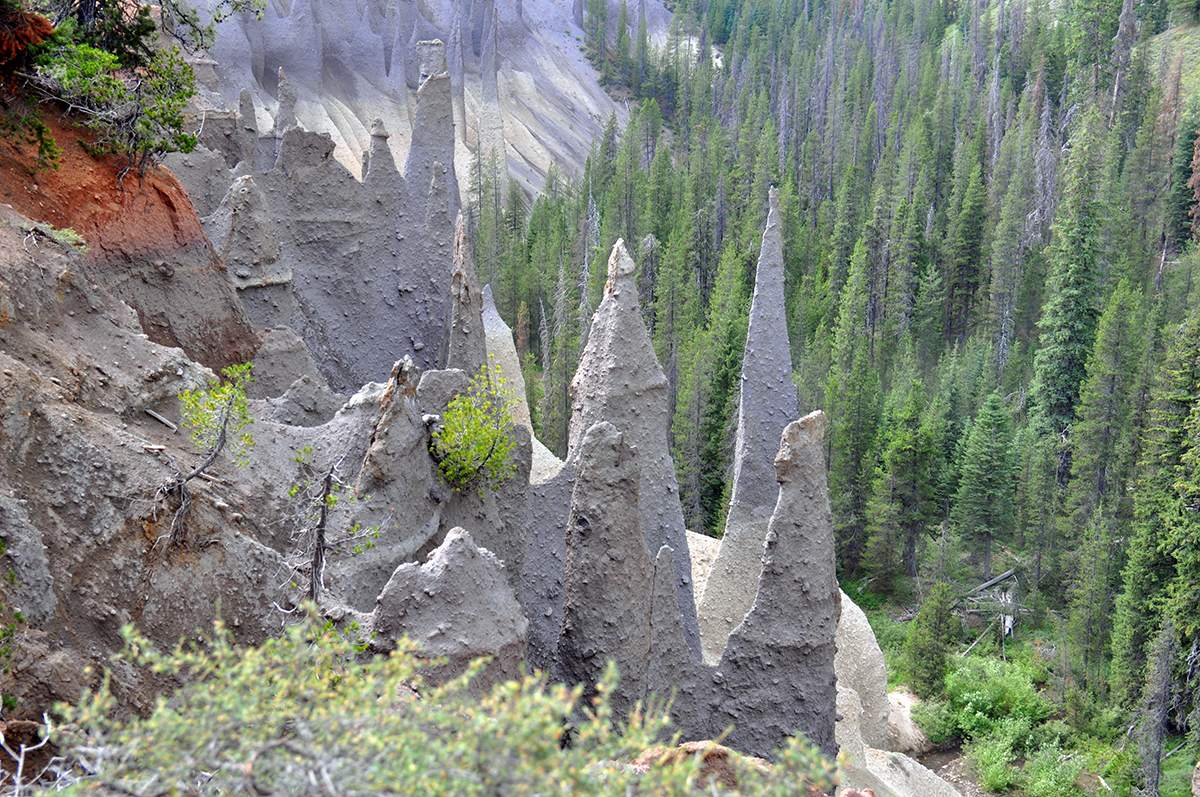 A boat tour on Crater Lake

Those who wish to explore Crater Lake by boat can do so by joining a park ranger led boat cruise on the lake. Unfortunately during my visit there was too much wind and the boat tours were cancelled so I cannot tell you first hand what it was like. However those I’ve spoken to and who’ve done it all said it was well worth the time and money. Tickets can be bought by phone or from the self serve kiosk at Crater Lake Lodge and Annie Creek Gift Shop.

Other things to do at Crater Lake National Park

Other things to do at Crater Lake National Park are backcountry camping (only possible with a backcountry permit), bicycling, fishing, swimming and sky gazing. Make sure to check out the most current version of the park newspaper for the best options and more details on what activities can be done during your visit.

There are also plenty of ranger-led activities such as talks at the Rim, afternoon hikes, a trip on the Rim Drive Trolley Tour and junior ranger activities. 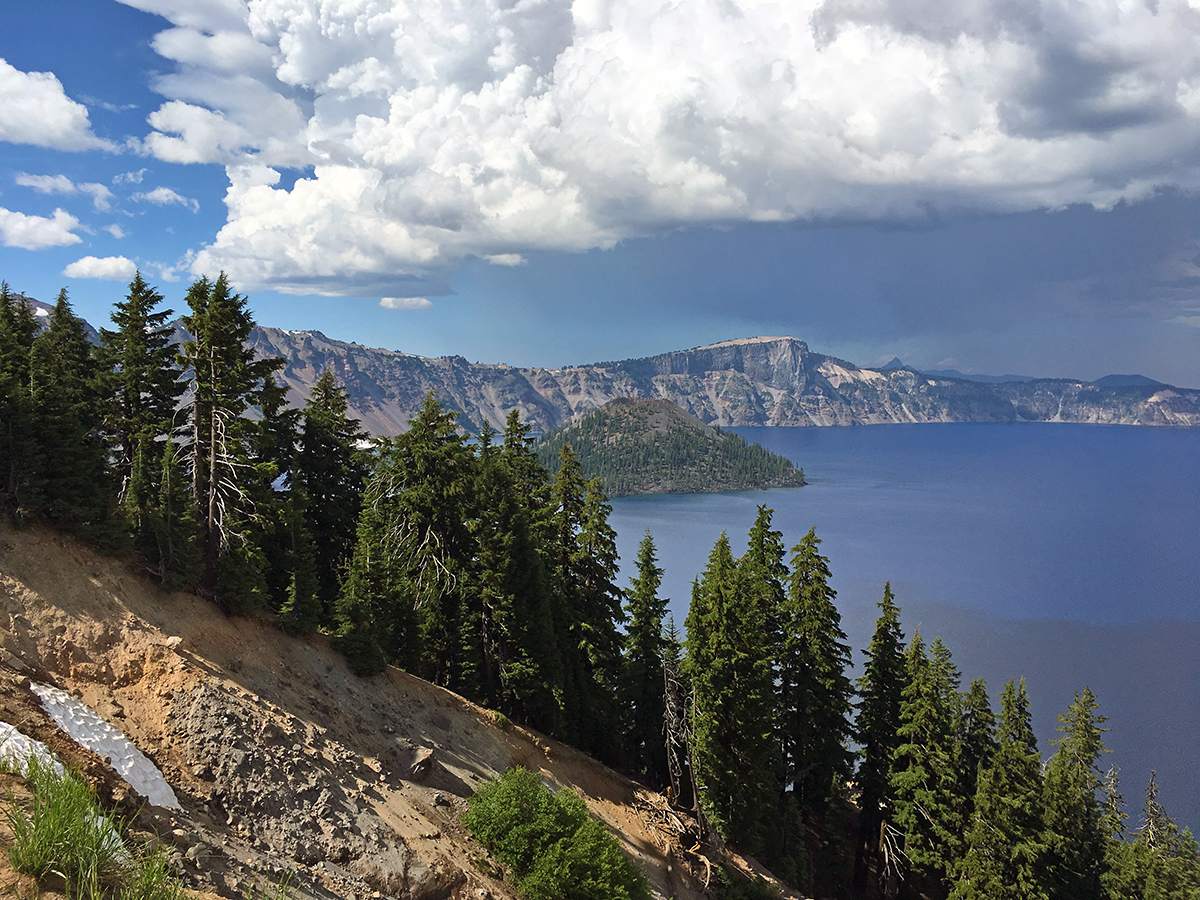 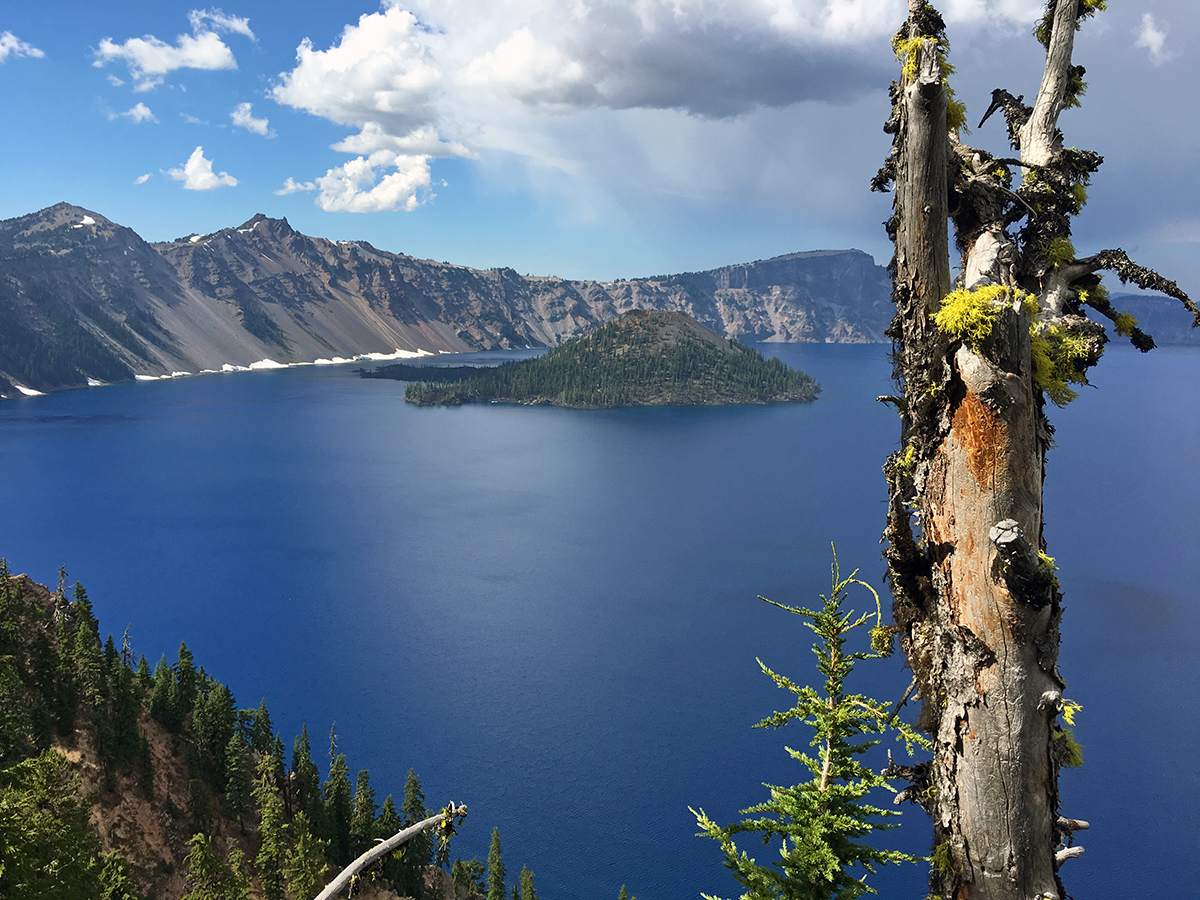 Note that many accommodations will only be open during summer season, including those inside the park.

As I hadn’t booked my campsite ahead, I decided to leave Portland in the early morning in order to make it in time to Crater Lake to find a campsite. However, upon arrival in Mazama Village (where the main campsite is located) it turned out that they were already fully booked for the day. They gave me some suggestions for nearby campsites and I ended up staying at Farewell Bend Campground, some 30 minutes away from Mazama Village. I really enjoyed my time there but since it took me quite a bit of a drive each day, I definitely recommend booking your camp site well ahead. Another option is to stay at Lost Creek however that site was closed during my visit so cannot tell much about it. 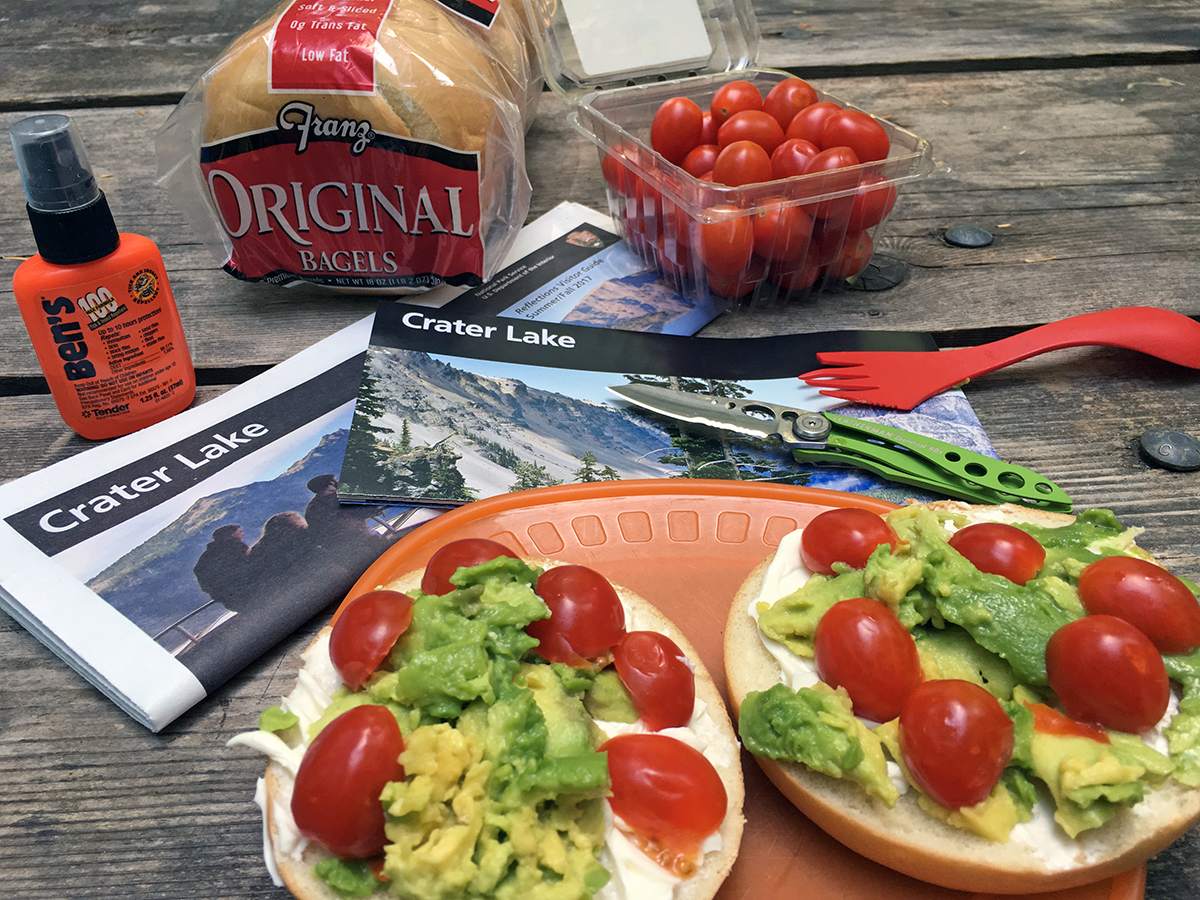 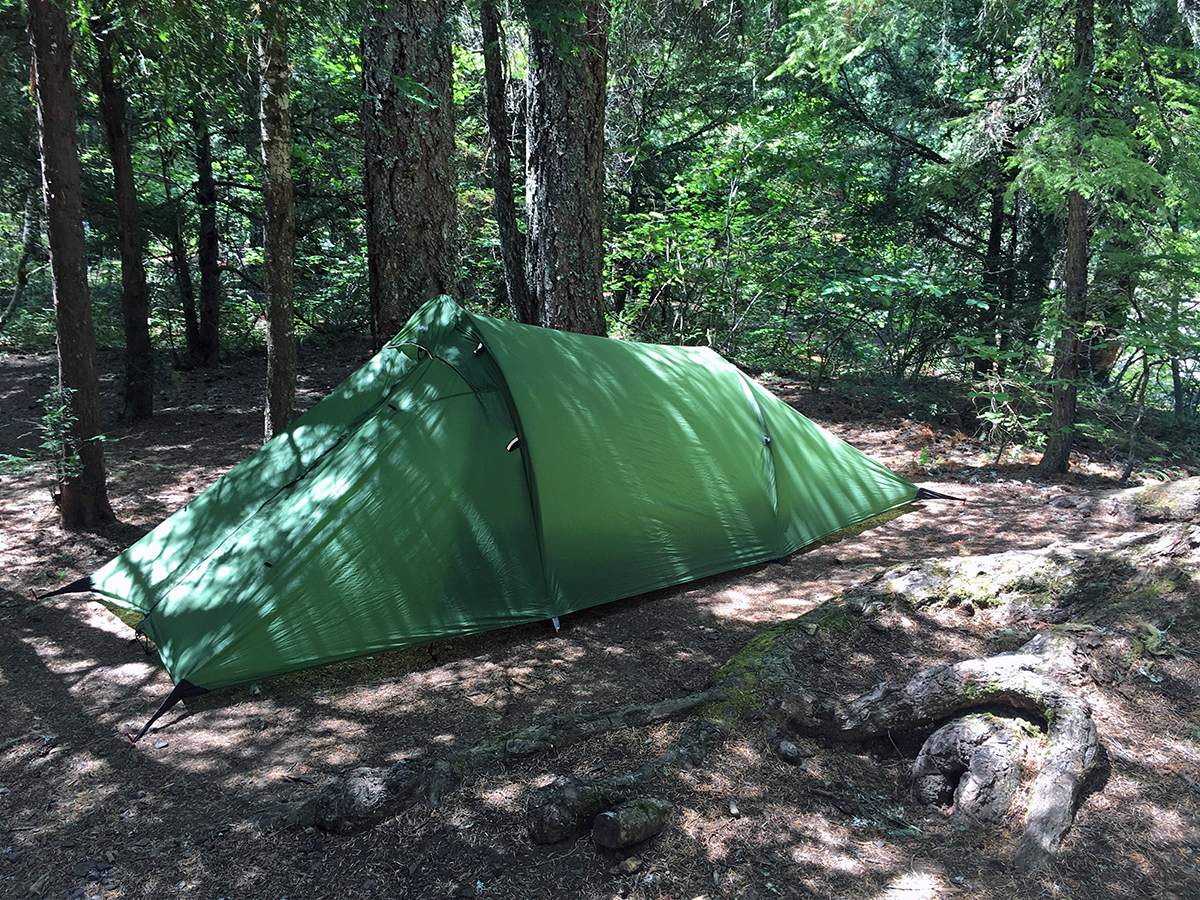 Is there cell phone coverage in Crater Lake National Park?

Upon arrival I did not have cell phone connection in Crater Lake, however in some higher elevation areas I would sometimes pick up a signal for a short period of time. Outside the park there was no signal most of the time so this is definitely something to consider when going to Crater Lake.

Those traveling to Crater Lake National Park will notice once again that it’s quite far away from everything. Having said that, it’s best if you bring all supplies you need from outside the park. Inside the park you’ll find some cafes, gift shops and a restaurant near the Rim Village and Mazama Village. Gas is available at Mazama Village but super expensive. Make sure to fuel up well before Crater Lake for the best prices as what they have at Mazama Village is only to be used to emergencies.

Generally, it’s rather chilly in Crater Lake National Park. The Rim Village is located at 7.100 feet (2.165m) making it quite a bit cooler than you would think. Weather changes fast and always make sure to bring a rain jacket and warm gear when hiking. When I did the trail to Mount Scott it was thunderstorming in the distance and before I got back to my car, it was pouring with rain, while it started out as a sunny day. Summers are short yet generally sunny, but due to the altitude it can snow at any day of the year. 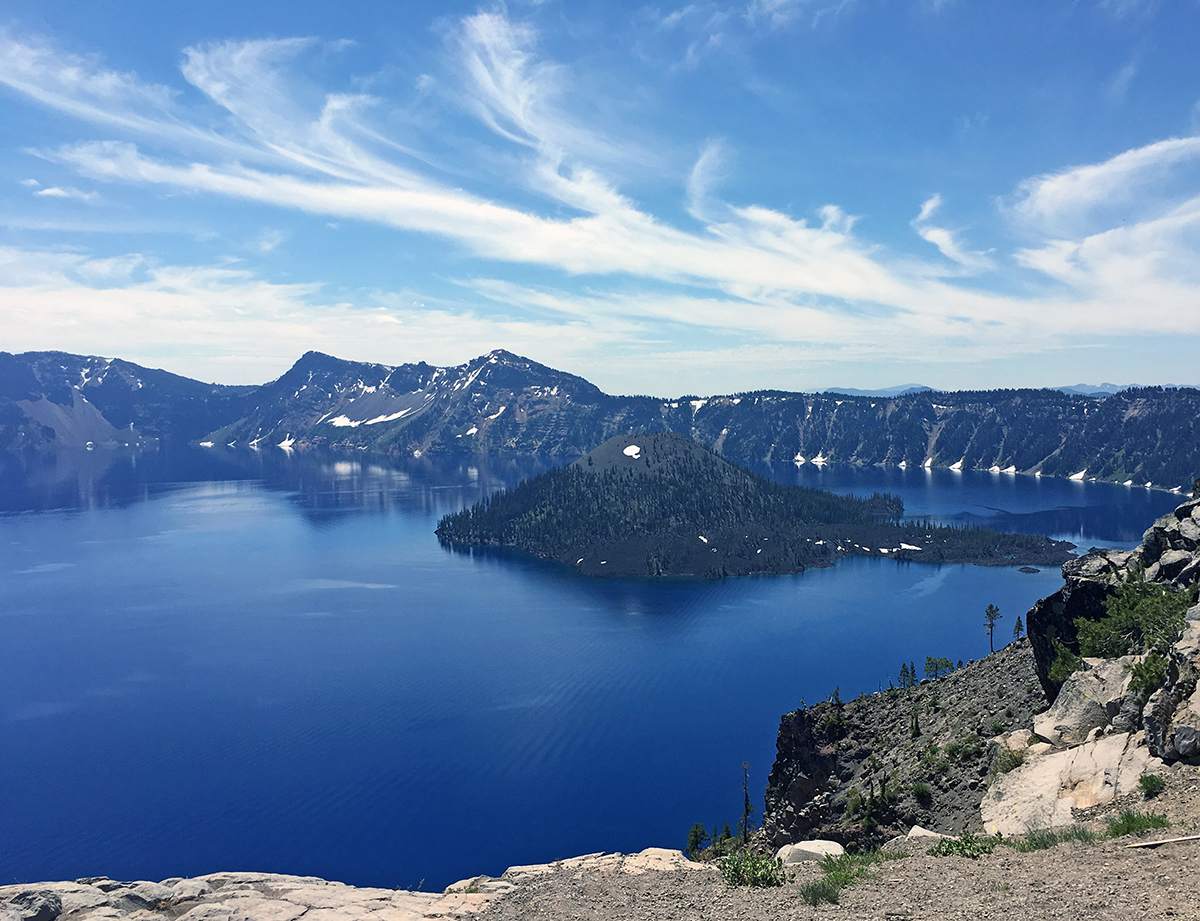 As the pictures and above video may indicate, I had a total blast in Crater Lake National Park. The long drive from Portland was well worth it and I really can’t wait to go back one day. This part of Oregon proved to be what I thought it would be: an amazing piece of wilderness with snow capped peaks, volcanoes, waterfalls and more.

I hope you find this guide to Crater Lake National Park useful. If you have any questions, concerns or additional information for other readers, feel free to leave a comment below. Please note that this blog contains affiliate links. If you make a booking or purchase through any of these links, I may earn a small commission at no extra cost to you. Thanks for considering!