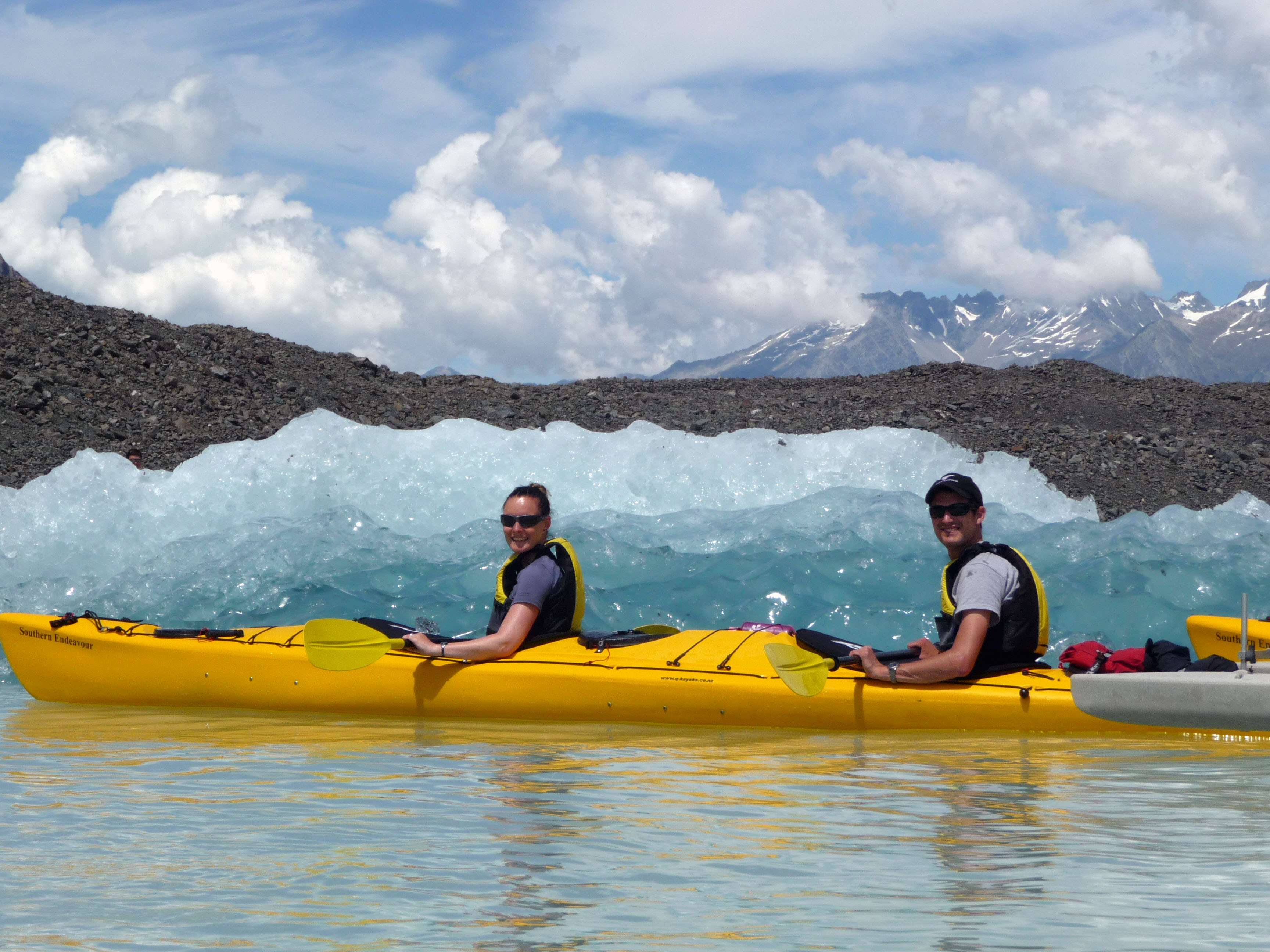 When scrolling through our New Zealand blogs you will mostly see hiking stories, since basically that’s what we went to New Zealand for! It’s a hiker’s paradise, we could easily spend a couple of years there without walking the same trail twice. However there’s also plenty of other fun things to do there that involve (almost no) hiking. We’ll share our favorite activities with you…

1. Kayaking between the icebergs on Tasman Glacier Lake
By far one of the best things to do in Mount Cook National Park! You will need previous sea kayaking experience in order to participate in this trip but that’s not hard as you will most likely have been up north before where plenty of kayaking trips are offered so you can get some practice. The icebergs in the lake vary from tiny to large and even though they were not as big as in Alaska (because over there, everything is bigger than anywhere in the world) it was still pretty spectacular. The organizer, Charlie, is a fun guy to hang out with! 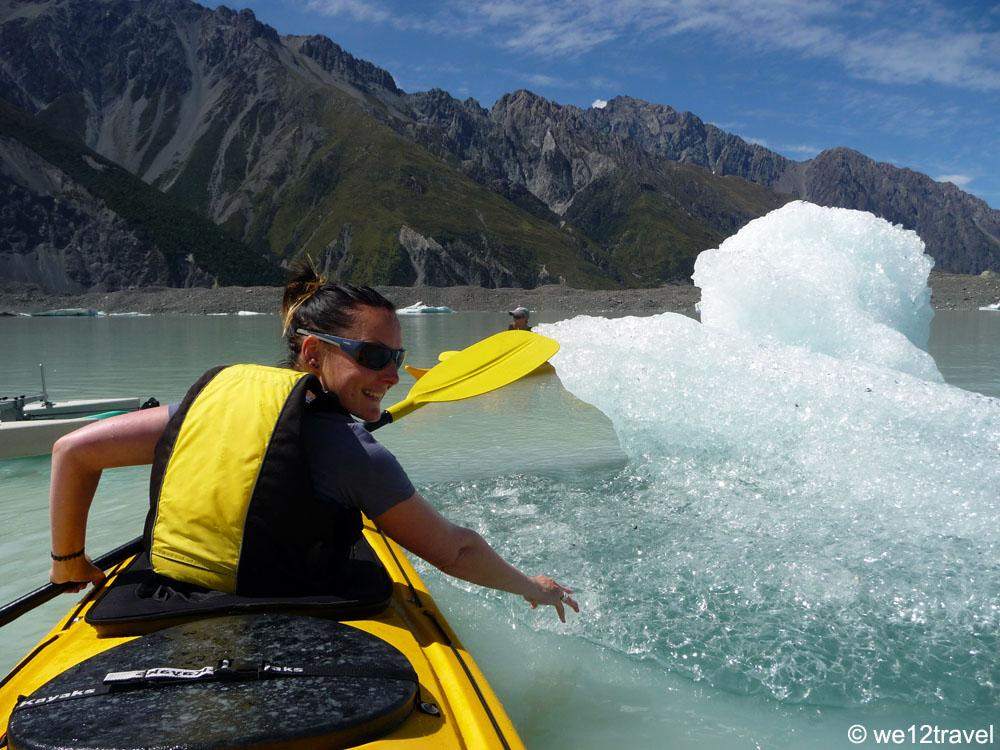 2. Do the Skywalk on the Skytower in Auckland
If I would have told my mum I was going to do this, she would’ve kept me from going to New Zealand. So that’s why I only told her after I’d been. Believe me, this is not as scary as it looks. It was the perfect start of our New Zealand adventure, as we were up on the tower within 24 hours after our arrival. There’s nothing but thin air between you and the city 192 meters down below. Very exciting! 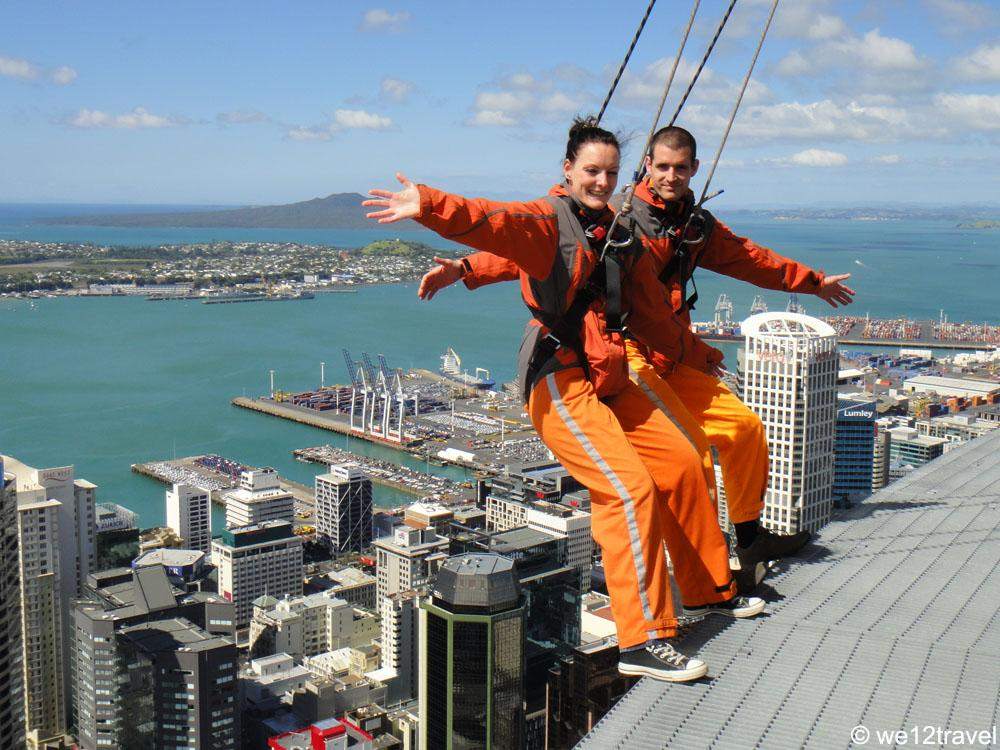 3. Visit Hobbiton
If you enjoyed the Lord of the Rings movies, you will just have to visit Hobbiton. When we were there, they just ended  filming the first Hobbit movie one week earlier so everything was still pretty much in place from how they filmed it. Just a shame that the Hobbit movie is such a drag, the LOTR trilogy is just so much better! 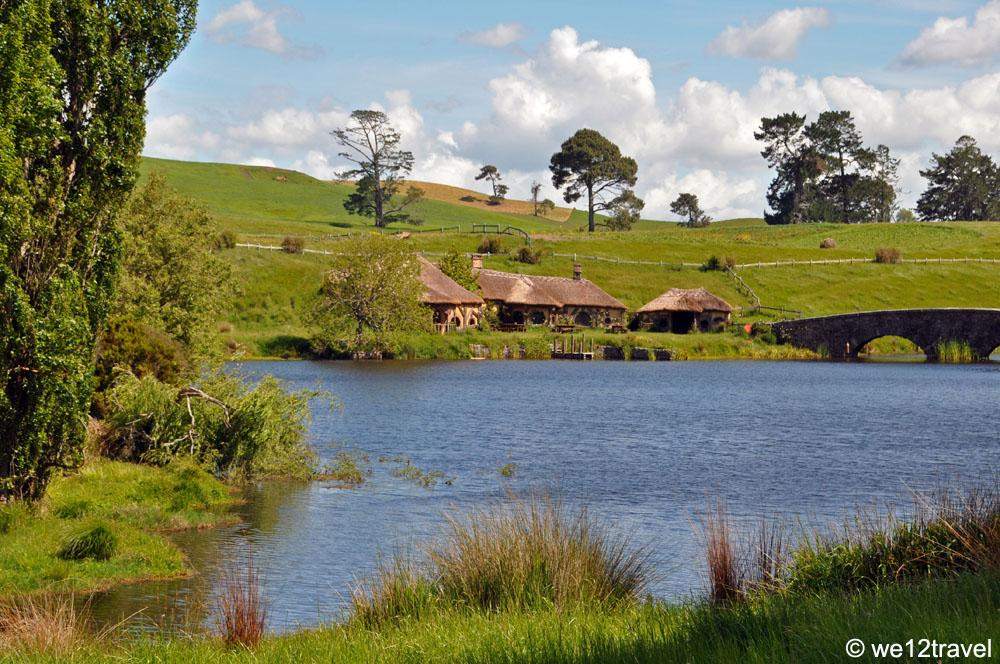 4. Go downhill mountainbiking in Queenstown
Definitely not for the faint hearted, you will love Queenstown when it comes to adventure. If you are keen on mountainbiking, just go for it! You can take the cable car (and your bike, which weighs a ton) up and just go down from there. Very slowly because jeez, it’s quite a drop… However basically, it’s just like skiing (colors represent the same grade of difficulty) but then with a pair of wheels instead of ski’s. 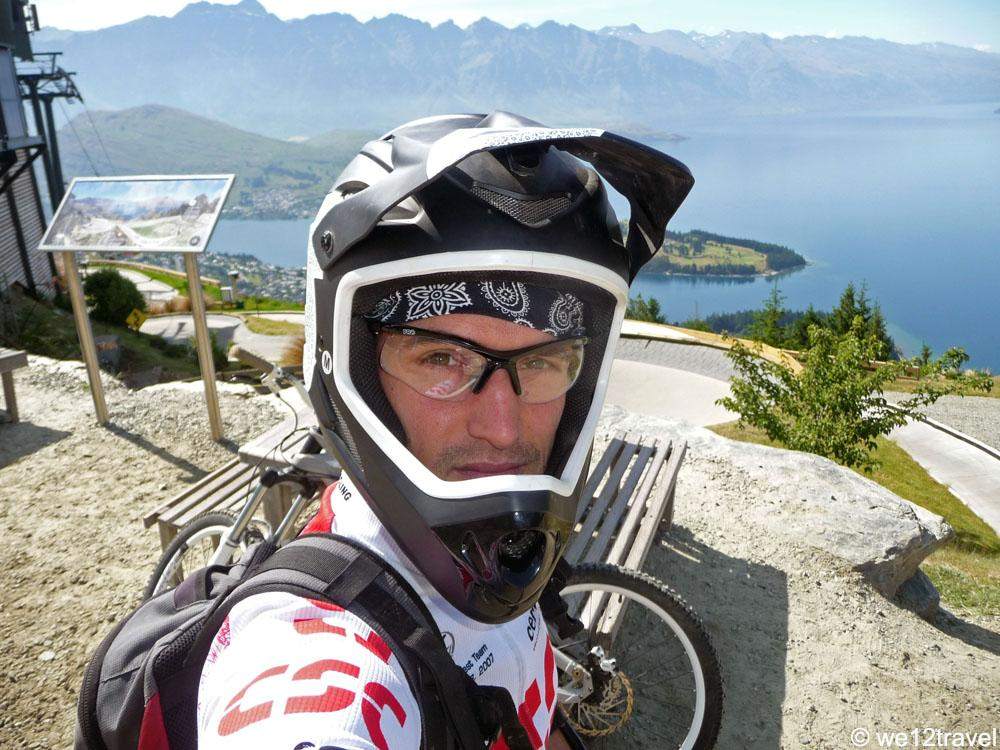 5. Cycle the Otago Rail Trail
You’re not a true Dutch person when you don’t go cycling during your trip. So at the very last minute we added a day on the Otago Rail Trail to our itinerary. It’s an old railroad that has been changed into a trail suitable for cycling, hiking and horseriding. We cycled about half of it and you can read our full report here. 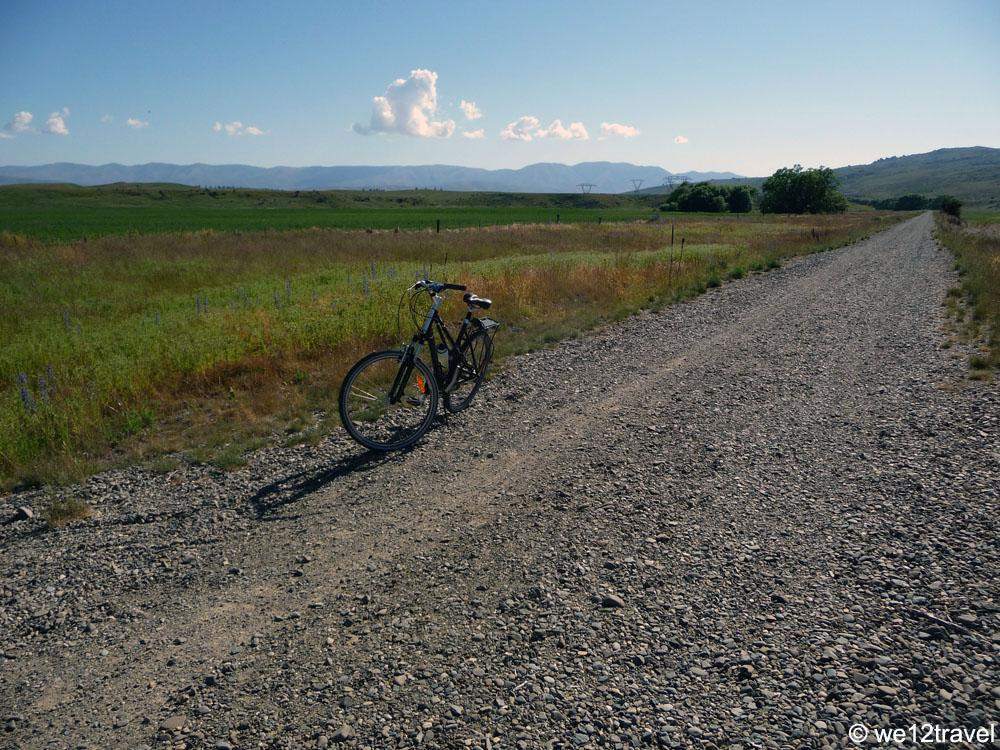 6. Kiwi spotting on Stewart Island
Stewart Island is the place to be for kiwi’s, at least that was what we were told. We hiked the 4-day Rakiura Track there, which was OK but not as spectacular as we hoped for. Mostly it was just incredibly muddy. Upon arrival in one of the huts, the warden promised to take us out “kiwi spotting” at night. We waited until it was almost dark for them to show up and eventually, one did. However a stupid Frenchman thought he could use the flash of his camera to take a picture. FLASH! Bye bye kiwi! This is the best picture of a kiwi we got… 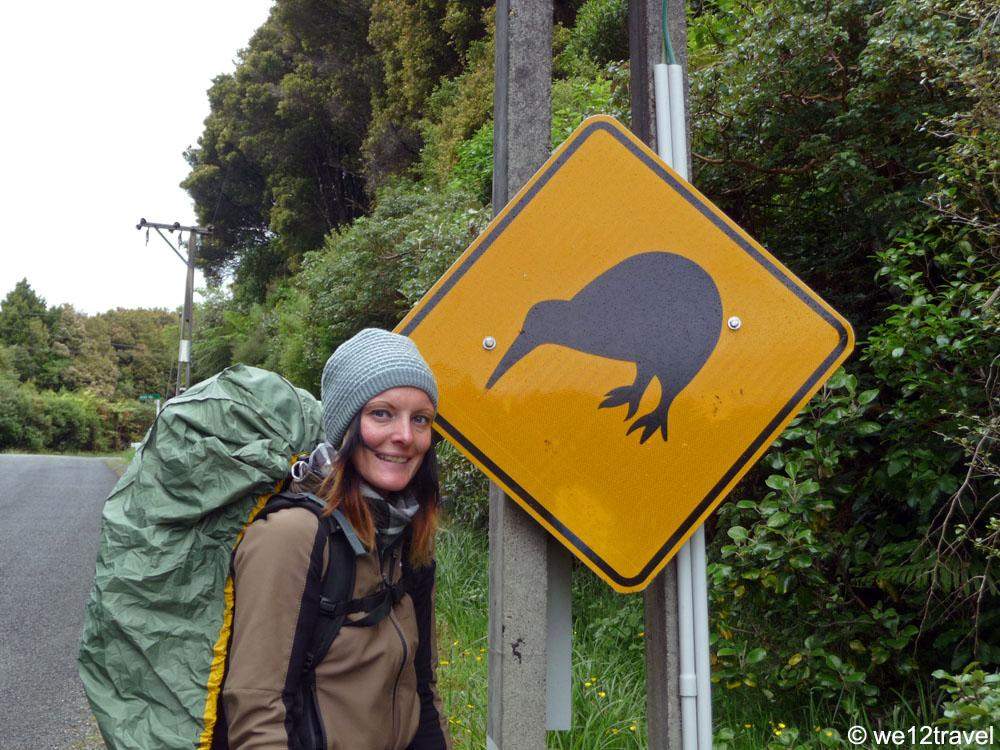 7. Catch your own salmon
OK, it doesn’t exactly measure up to catching wild fish but it’s a fun experience anyway. The owners of the Anatoki Salmon Farm are Dutch and were very welcoming. We only had to wait about 5 minutes for the salmon to bite and withing 15 minutes we were eating it… and the good thing is, that it’s for free! You only pay for what you catch. 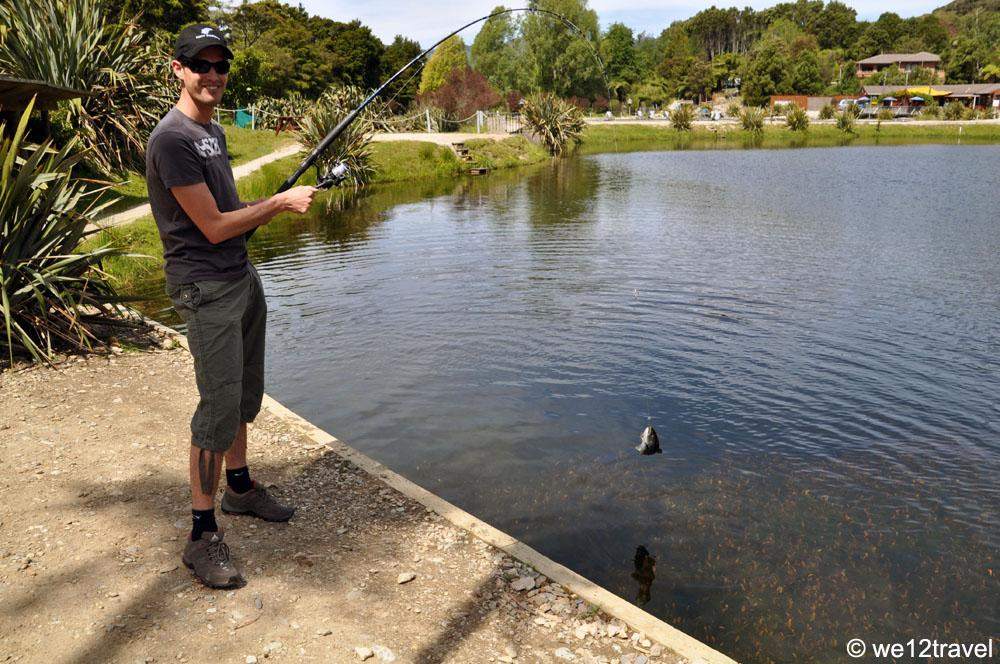 8. Siberia Experience
This is a combination of flying, walking and a jetboat in the remote Siberia Valley on New Zealand’s Southern Island. There are various itineraries, ours first took us for a flightseeing above the valley with magnificent views of Mount Aspiring, then we walked an easy trail along the rushing river to a pick up point, where we started our jetboat tour. Sure, it wasn’t as spectacular as the one we did in Queenstown but it was way more remote. We’d love to discover Siberia Valley once again for some more extended hiking for sure! 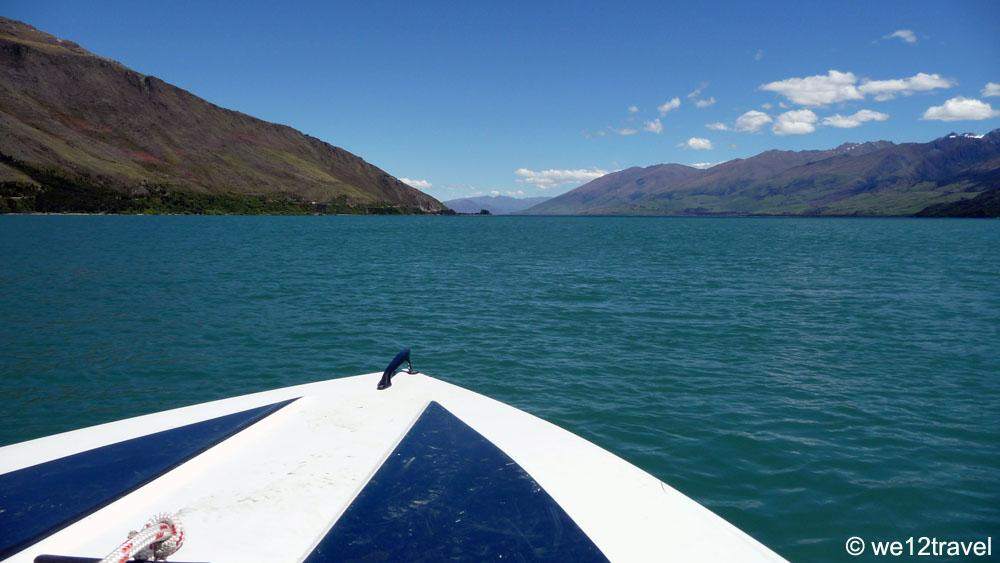 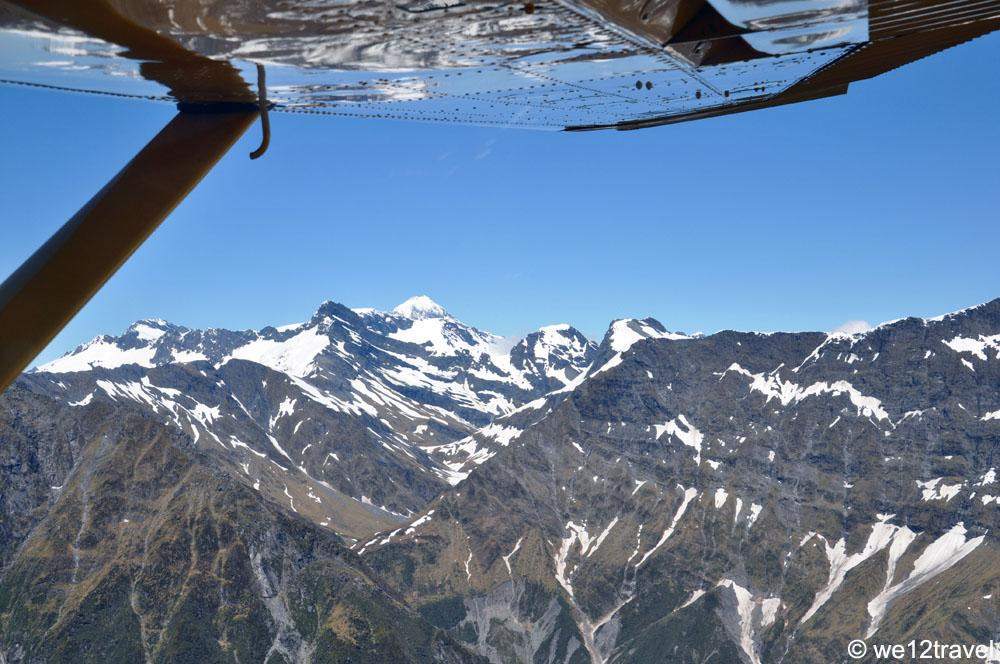 9. Take a class at the one and only Les Mills gym
Les Mills classes are taught all over the world and I love them. Without them, I’d be lost at a gym, I need someone to scream at me I should work harder. So when I got the chance to learn from the guys who make the programs, I didn’t hesitate for one second. My instructor Marije arranged passes for us and I took a Bodyattack class and Martijn went spinning. Within 24 hours of our arrival, that is. Slept very well afterwards… (oh and we are not international instructors btw!) 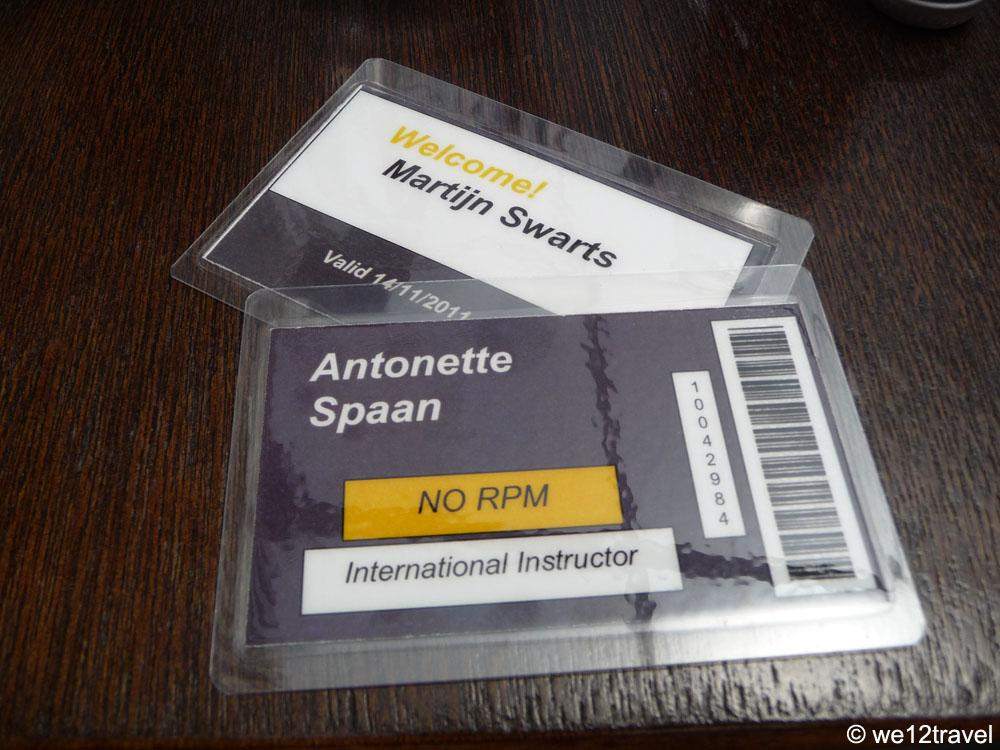 10. See the glowworm caves in Te Anau
This can be done by anyone! And it’s cool, even though it may not sound like that. We got a really good deal for the tickets and there for decided to make this cruise to be surprised by thousands of glow worms in the caves across Lake Te Anau. We didn’t expect too much of it, other than being stuck between old people on a vessel, but it was way cooler than that. We would definitely do it again! In case you don’t have money and happen to be on the Kepler Track, there’s also a chance to see glowworms there at night, however there are just about 15 or so… 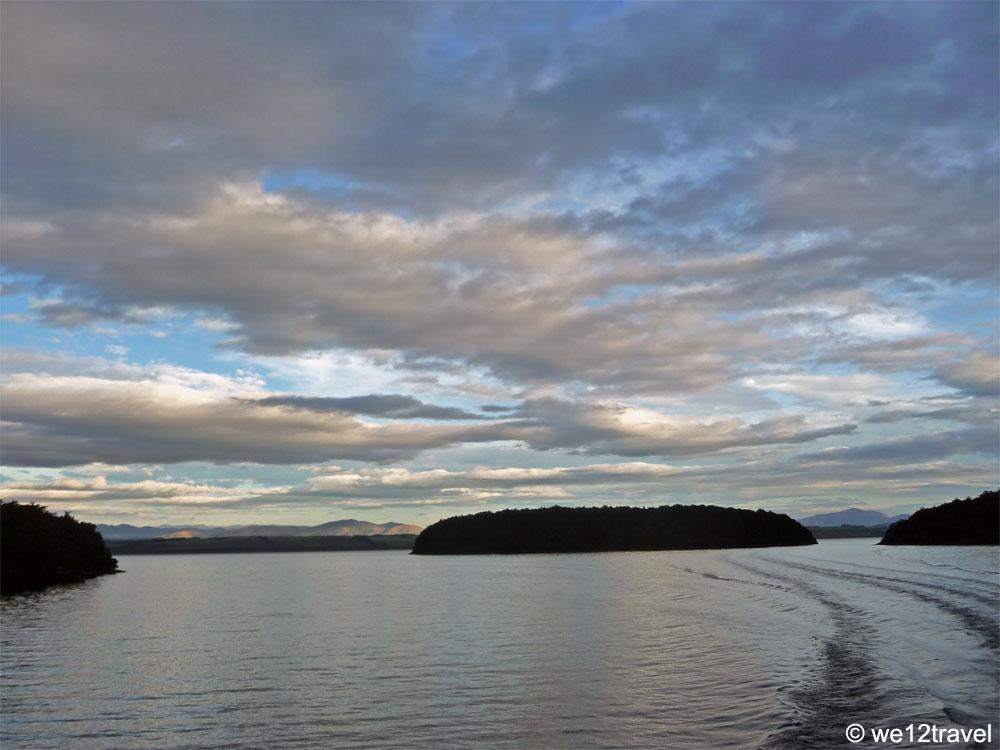 What about bungy jumping and sky diving I hear you think? Well, been there, done that in 2002 already. Bungy jumping is pretty overrated, sky diving was awesome. OK, well very (very!) scary and awesome. You can see our video here…

When Anto recently told Martijn she was considering saving up to go to Antarctica, he replied: “you go, for that money I’d rather go back to New Zealand for 6 weeks” so will it be New Zealand again or maybe still Antarctica? All options are open…  What’s for sure though is that there is still so much to see in NZ and even though we have spent almost 3 months there already, we can’t wait to go back. Shame that it’s just not a place you will go to for just a week or so …

Click here to read all of our New Zealand articles.