The Geierlay bridge: a must-do in the German Hunsrück

Looking for a something fun to do in the German Hunsrück region? Then definitely consider the Geierlay suspension bridge. This suspension bridge in Germany is located in the Hunsrück just a three-hour drive from the Dutch-German border. I visited the bridge three times in recent years, the last time I even was completely alone. Below you will first find my original report and photos from August 2016, followed by updates and tips that I added following my second and most recent visit in May 2019. Looking for a hotel at the Geierlay bridge? You will find this later in the report, as well as my tips to experience the Geierlay suspension bridge on your own, just like me. Enjoy reading!

Report of my visit to the Geierlay bridge in 2016

‘I was recently on the road in Rheinland-Pfalz, one of the German regions. One of the highlights of my trip here was a visit to the Hängeseilbrücke Geierlay, or the Geierlay Suspension Bridge. With about 360 meters it is the second longest suspension bridge in Germany the Titan RT in the Harz Mountains) and it is a true adventure to walk over it. The suspension bridge is one of the newest attractions in Rhineland-Palatinate, it was opened in October 2015. Since then, the bridge has become a real tourist spot and with good reason.

The Geierlay suspension bridge is located in the Hunsrück, a low mountain range that is part of the Rhineland plateau. Although the first idea to build the bridge came into existence in 2006, it was not until May 2015 that construction began. Five months later the bridge was opened for visitors and the great thing is: you don’t even have to pay an entrance fee!

Geierlay walking route – how to get to the bridge

As mentioned, the Geierlay suspension bridge is the second longest in Germany. The idea of the bridge is inspired by the many suspension bridges in Nepal and I can tell from experience that it is a great copy. Only now did I not have to share it with heavily loaded yaks, but with dozens of other tourists. Because it is a sunny Saturday during the summer holidays, I decide to make sure that I am reasonably on time. The Geierlay visitor center in Mörsdorf opens at 10 a.m. and I receive additional information here, such as a map with the Geierlay walking routes. The lady who works here tells me that it is about 1.8 kilometers to walk from the parking lot, you cannot reach the bridge by car. 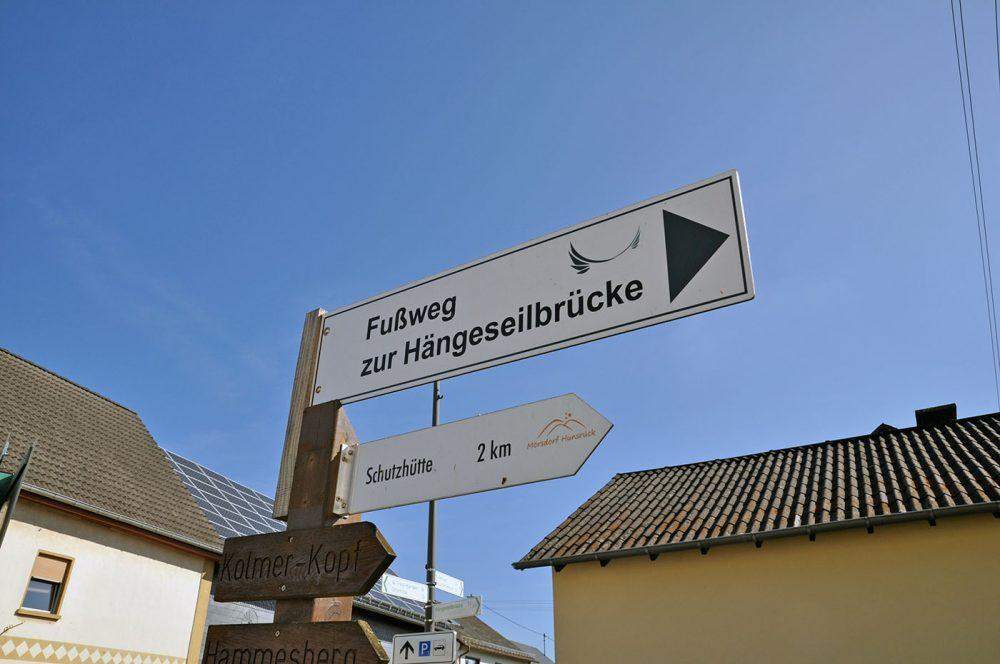 To the Geierlay bridge

It’s fairly quiet and I start walking towards the town, following the signs directing me to the Geierlay swingbridge. Not long after I’m leaving Mörsdorf behind again and I’m walking through the countryside surrounding the village. Every now and then I see some other travelers but it’s not busy yet. A tractor passes and the farmer riding it, doesn’t seem disturbed by the audience at all. After about twenty minutes of walking, I arrive at the bridge. It’s fairly crowded at the entrance but on the bridge itself it’s not too busy yet. It’s clear to me though that it’s a tourist attraction for all ages: I see elderly with their walking polen, families with small children and people of my age. 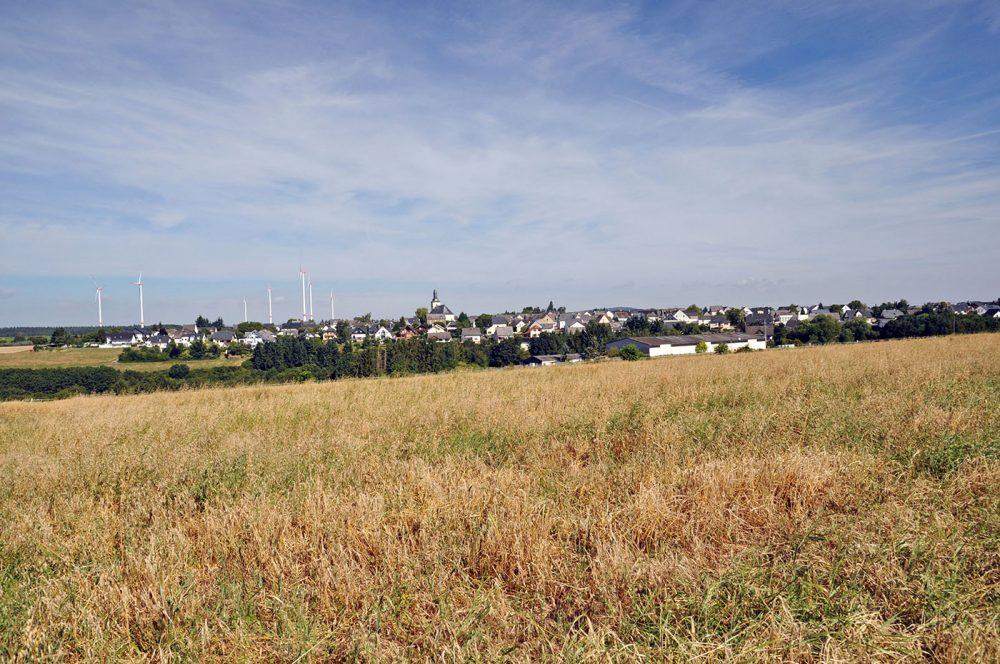 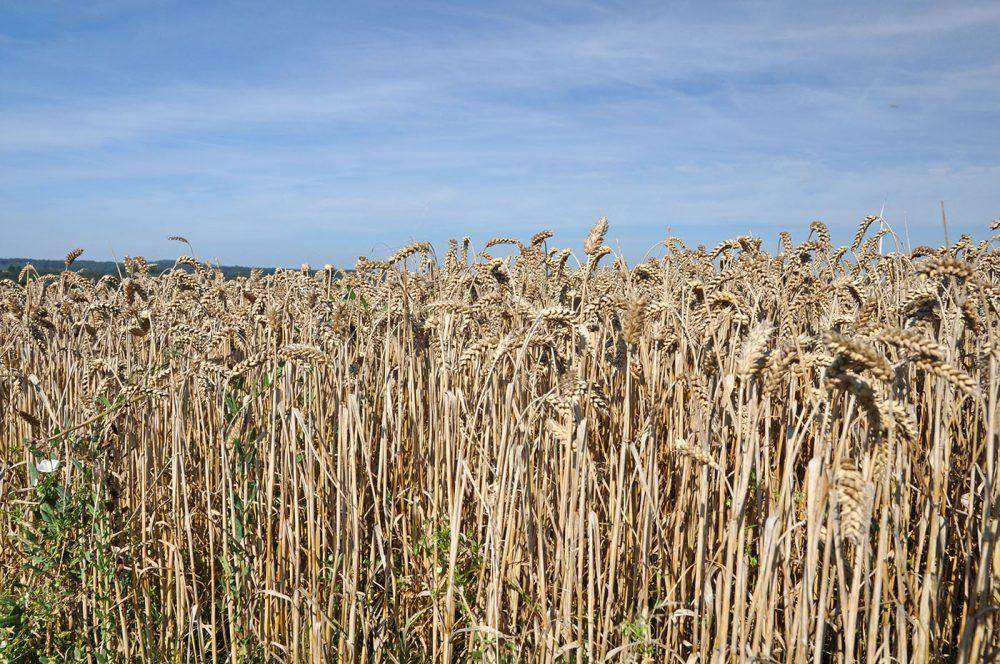 A first view onto the bridge makes me realize that 360 meters is quite a distance. According to my calculations, it will take me about four minutes to reach the other side, if I will walk continuously. However, I want to film with my GoPro, make an InstaStory and take photos with my Nikon. In other words: lots of work to do. I start walking towards the bridge which has gotten a bit more crowded in just a few minutes and step onto it. Adventure awaits!

Some visitors are shuffling forward, strongly grabbing the railing. It’s a windy day and so the bridge is swinging like it’s supposed to. I love it but a few others are terrified. Once I reach the middle, I grab my selfie stick and make a few quick shots. As the bridge is just 85 cm wide, it’s quite a challenge to have people pass me as I’m talking to the camera, however I manage while I’m swinging back and forth. Sometimes a mountainbiker passes and some people even carry a dog. I see a monk walking on the bridge as well as a busload of Chinese. Yes, it truly is an attraction for everyone. 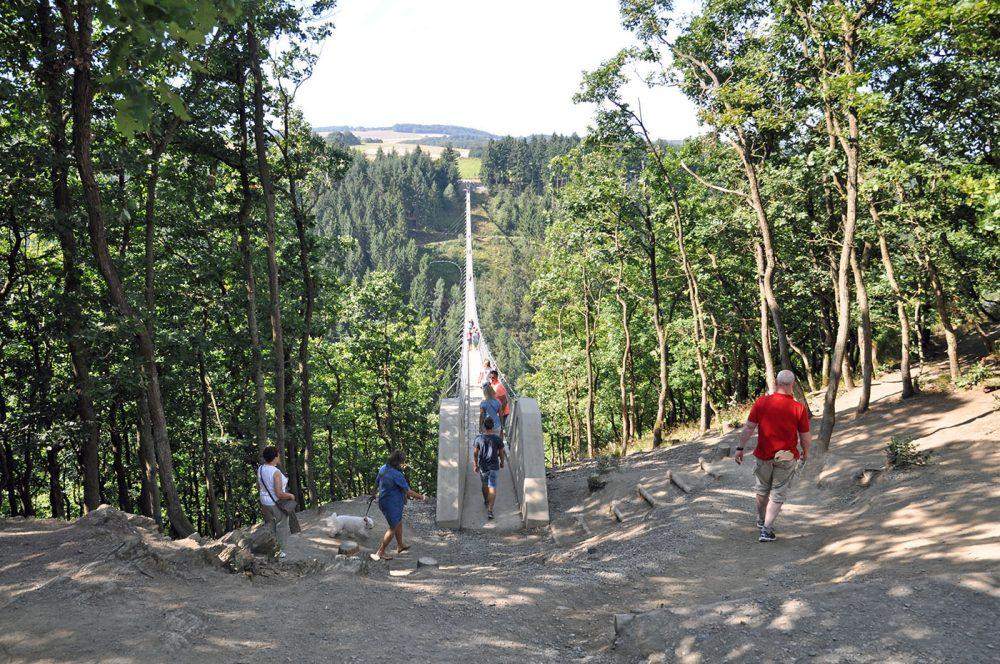 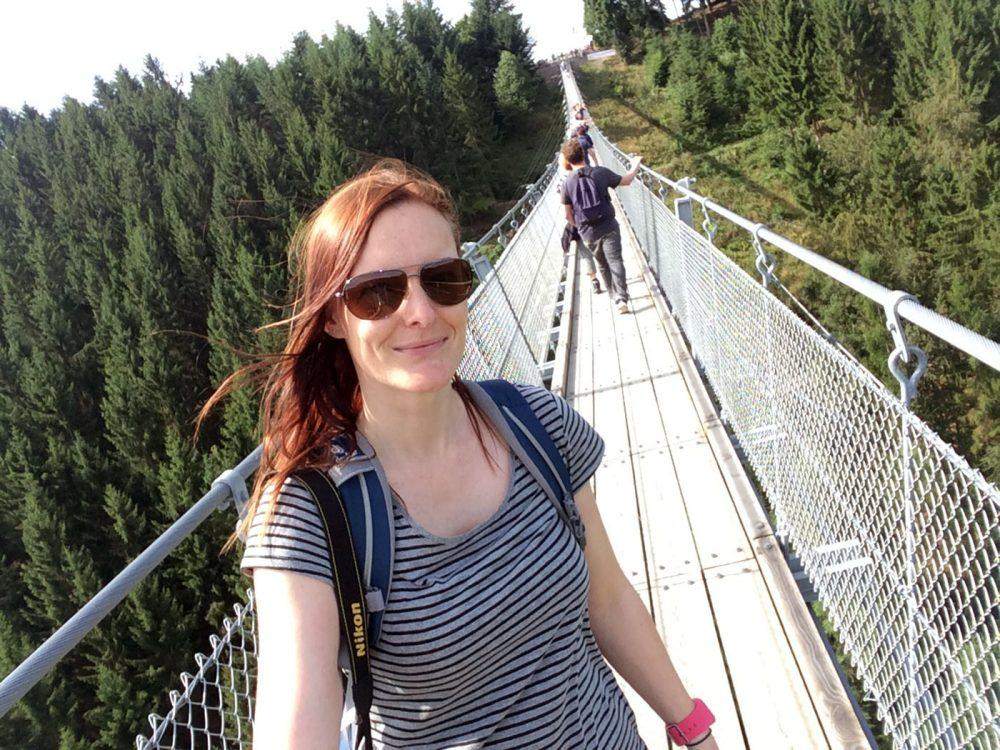 Although I am used to the rocking of the bridge in Nepal, many have a hard time. I see people breathing relieved when they have reached the other end and I see children crying. But luckily most there are fortunately the smiling people. I realize that I’m blessed to be able to go through life without fear of heights and I think it is great that I see people persevering for whom crossing the bridge is quite a challenge. So for me it is a great adventure, something I certainly did not want to miss.

To complete the images for my blog, I walk back again but I soon notice that, an hour later, it is a lot busier. There are real traffic jams on the bridge and I take over ten minutes to get to the other side. Once on solid ground again I decide not to go back again, but to walk towards the village again. I take some photos of various viewpoints and then find it time to escape the crowd. I walk back the alternative route, the over the narrow forest trail with deep abysses. It’s not too difficult, but not suitable for people with a fear of heights. After a good half hour, I arrive back in Mörsdorf. At first I want to eat and / or drink something somewhere on a terrace, but there really aren’t many places. So on to the next village!’

Tip -> read on because now there is a bit more hospitality in the village! 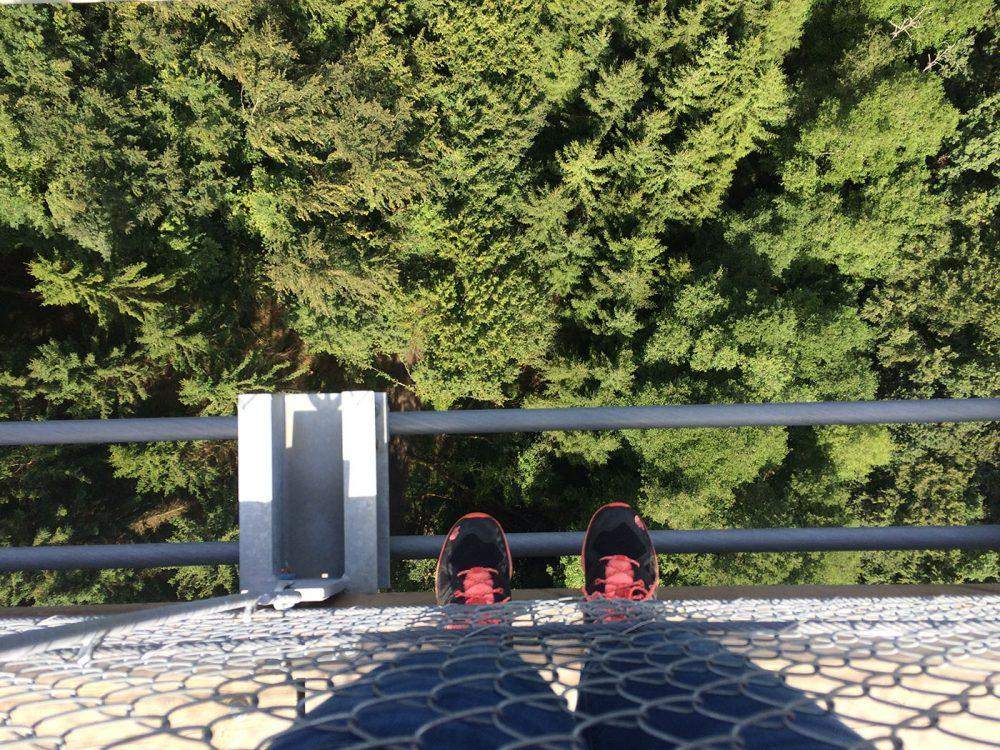 Practical information about the Geierlay swingbridge

– The bridge is located between the towns of Mörsdorf and Sosberg. You can best park the car in Mörsdorf, here you pay a small fee of four euros for two hours and two euros per hour onwards. Note that there is a parking system and you cannot enter the village of Morsdörf by car and not get to the bridge by car. The Geierlay Bridge walk is easy and should take you about 25/30 minutes one way. There are signs all over. Wheelchairs and strollers should also be able to reach the bridge on the paved trail.

– The bridge is 360 meters long, 85 centimeters wide and is at an altitude of 100 meters above the ground of the Geierlayschleife.

– You can combine your visit to the Geierlay swingbridge with a 6.2 kilometer long hike around Mörsdorf. You can pick up a map from the visitors center. Make sure to wear sturdy footwear, especially when it’s raining, as the trail down can be very slippery.

– There are no toilets at the bridge at the moment, the last toilet stop before the bridge is at the visitor center. There are also no shops or kiosks, on a warm day it is certainly wise to bring enough water and perhaps something to eat. They do intend to install a number of mobile toilets in the future and perhaps a cart where you can buy something to drink. However, during my most recent visit in May 2019, both of these were not yet there.

– Tasty food is served at the local pizzeria, where they have a traditional wood-fired oven. Inside there are only a limited number of seats (outside on the terrace there are more) but the wait was worth it. For less than 15 euros I had a delicious pizza and a beer!

Where can you find the Geierlay Hängeseilbrücke?

Mörsdorf is about a 365-kilometer drive from Utrecht, globally between the cities of Trier, Koblenz and Frankfurt. It takes about four hours by car to get there. When you come via via Treis (that is the route that Google Maps advised me), Google Maps tells you to take a different route than the direction indicators indicate (direction Hängeseilbrücke) – I was stubborn and Google sent me through the center of Treis with all are one-way roads. Not so smart, I should have just followed the signs. You have been warned about this ; -) 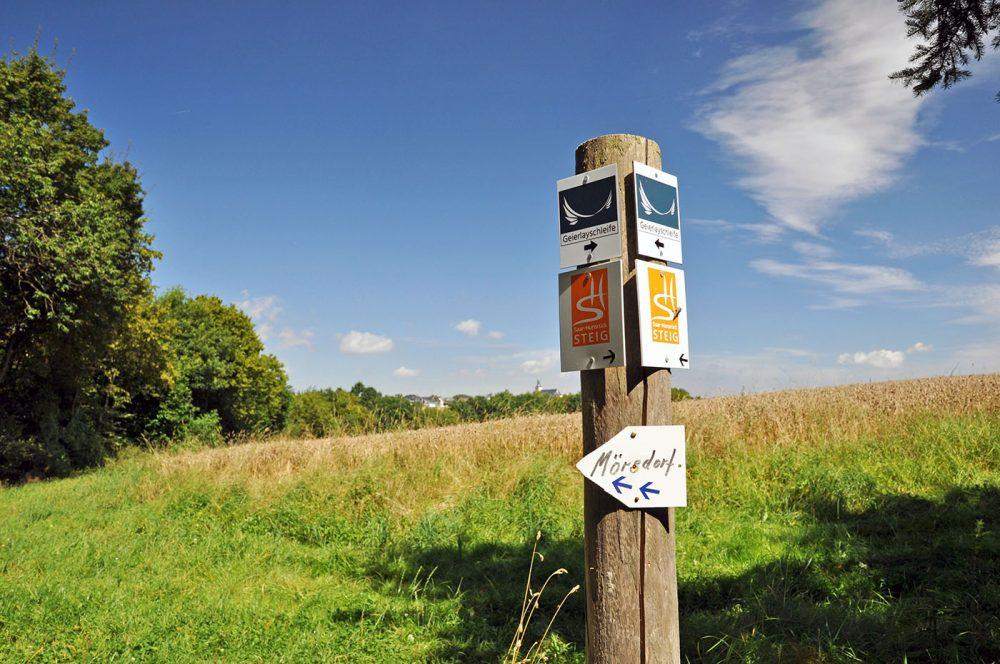 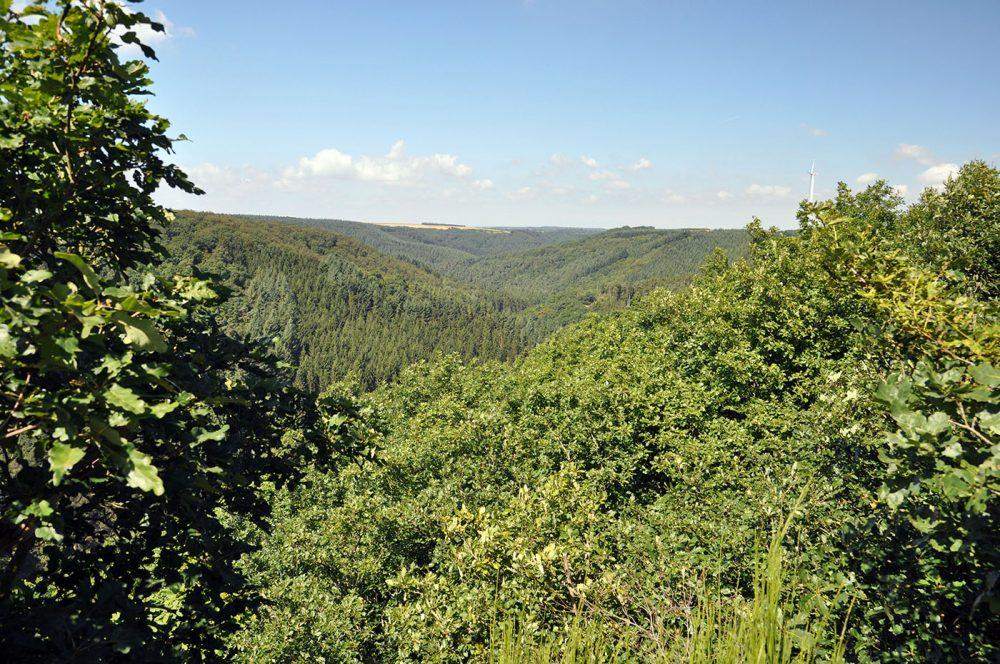 Do you want the Geierlay suspension bridge all to yourself? It’s not as impossible as you think it is! I proved it a few weeks ago when I was here on a Sunday evening at half past seven. The first time I visited the Geierlay Bridge I did not spend the night in the neighborhood, but this time I consciously opted for an overnight stay in Morsdörf. I spent the night at the affordable Pension Kolzer, about half an hour’s walk from the Geierlay suspension bridge. So I could park here for free and because I stayed a stone’s throw away until late at night and could take the time to wait until everyone had left. It is a very nice and comfortable B&B that I booked for less than 50 euros. A full breakfast the following morning was included.

During my first vitis, I spent the night at Hotel Hunsrücker Fass in Kempfeld, a 45-minute drive from the bridge and during my second visit at Hotel Burgstadt in Kastellaun, a 10-minute drive from Geierlay. Check the availability of this hotel or other hotels near the Geierlay suspension bridge here!
nbsp;

Also make sure to check out the short video that I made of my most recent visit to the Geierlay Bridge. I speak in Dutch, but it has some stunning panoramas nonetheless!

Although I have been there three times now, I still find the Geierlay suspension bridge extremely worthwhile. Not only to walk over it, but also to use as a base for countless beautiful walks, including the Saar-Hunsrück Steig.

I made this trip at the invitation of the German Traffic Agency for the #EnjoyGermanNature campaign. All opinions are of course only mine. Affiliate links are in this blog. This means that when you make a reservation through one of these links, I will receive a modest commission for you at no extra cost.