Did you ever hear about the island of Onekotan? I bet you didn’t, and neither did we. I’ve been closer to it than I thought with my trips to Alaska but still – it’s pretty much in the middle of nowhere! In 2012 three freeriders “discovered” this volcanic island that belongs to the Pacific Ring of Fire on Google Earth and they decided it would be pretty cool to be the first ones in the world to master the volcanoes’ slopes on skis. So off they went on their expedition. Their story was told during the premiere of the European Outdoor Film Tour in Amsterdam last Friday night.

Goretex arranged for us to be able to attend the opening night. We weren’t sure what to expect of it, but it turned out to be an evening full of awesome adventure movies. The premiere was held at theatre De Meervaart in Amsterdam and even though it was the 15th time already, this was only the first time we attended.

What is the European Outdoor Film Tour about?

It’s an event showing the best outdoor and adventure movies of the year. They are between 3-25 minutes long and show one hundred percent pure adrenaline! From slacklining all over the planet to longboarding in the Sierra Nevada – you will be on the edge of your seat for the full two hours (we were!). In total there are nine movies and they all have their own stories. Some in high pace from the first to the last minute, some also showing the more personal stories from the athletes. We loved every single one, also because the landscapes in the movies are just so stunning. Some locations in the movies were Wyoming, the Grand Canyon, Alaska and Patagonia and all I could think when I saw it was: “I need to get back… again!” As I said, we loved every single movie but we’ll share a little more information about our top three including some trailers that we found on Youtube, just to give you a little idea (checking them out is definitely recommended).

“Everything is hard before it’s easy.” The Masters of Slack movie surprised me most as I didn’t really know a lot about slacklining. Sure, I’ve seen people do it before with a line between two trees in the city park (although it’s not so common at all here in The Netherlands) but this ten minute movie really made me think “huh, how do they do that?” pretty much all the time. Masters of Slack is a portrait of slackliners Jaan Roose and Andy Lewis and show some of the most amazing balancing I’ve ever seen in my life. By the end of the movie, we decided we’re going to get a slackline too and put it up on our attic. Including a mat below it, because when you fall, it might be painful on our wooden floor. The quotes in the movie, especially the ones by Andy Lewis (“people today are pussies”) make it extra spicy. If you want to have a sneak peek of the movie, check this Youtube link! 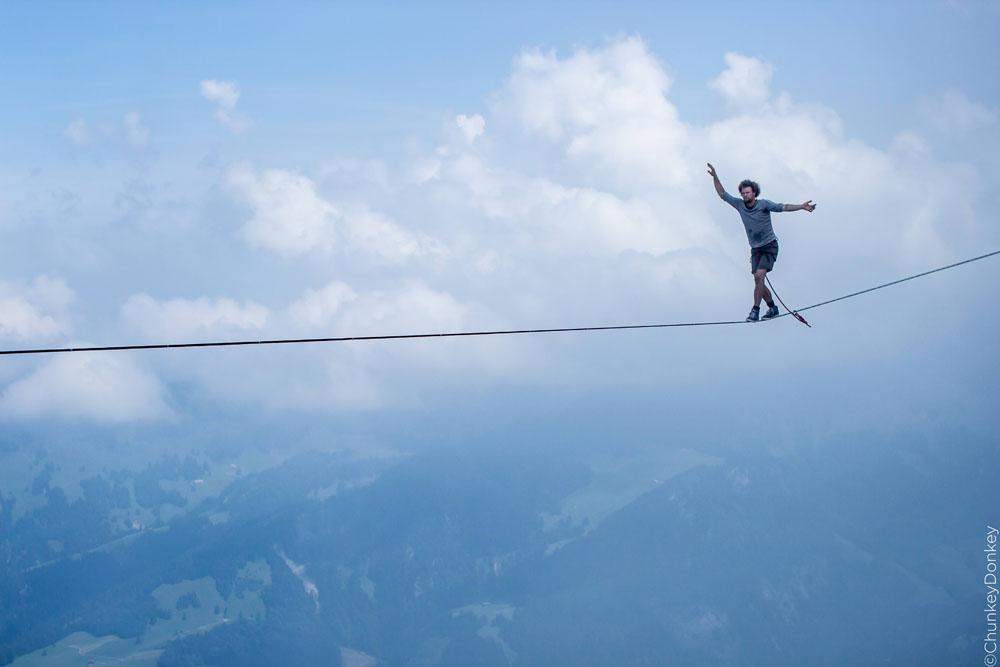 “You wanted expedition? You will get it!” This is most intriguing quote from the movie Onekotan – The lost Island (it’s o-ne-ko-tan, not 1-kotan) which is about three freeriders that take off to an uninhabited island between Kamchatka in the Russian Far East and Hokkaido in Japan. Both of these places are on my “bucketlist” (I’m starting to hate that word now that everyone is using it at least twenty times a day in their vocabulary) and maybe it wasn’t the adventure itself that appealed to me most, but the setting of the movie. This part of the planet is unrelenting and not a place for people to be, yet those three men set out to attempt being the first ones to ski down the slopes of the iconic crater that lies on Onekotan Island. Got curious? You can check out the trailer here, I’m sure you’ll want to see the whole movie afterwards! 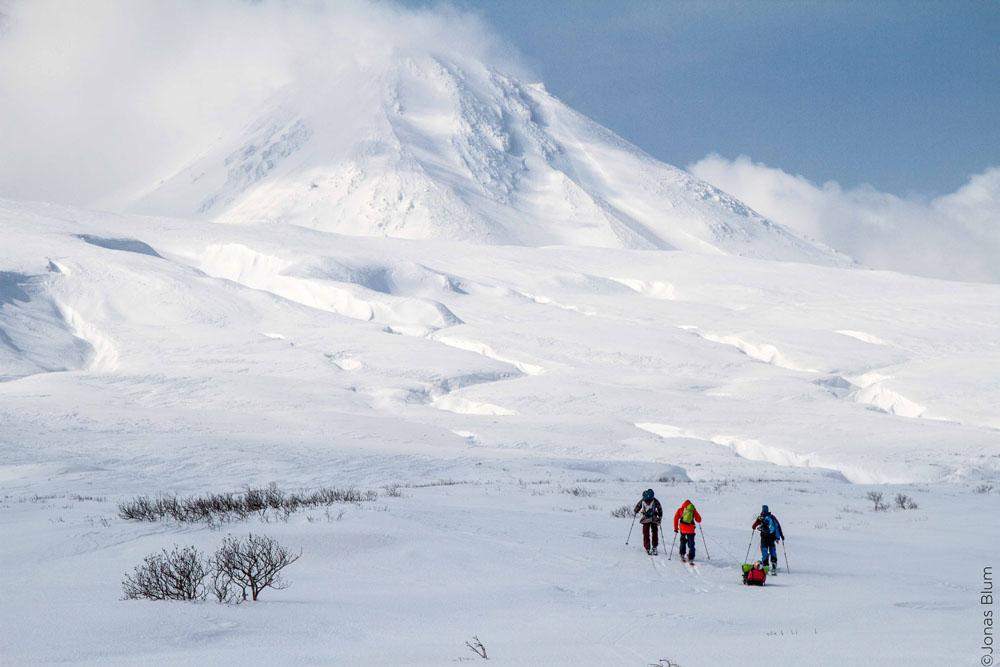 A Line Across the Sky

Show me something in Patagonia and you’ve got me right in your pocket. The mountains behind the small Argentinean village of El Chaltén are among the most amazing in the world if you ask me and I still feel lucky every day that we had a window of good weather when we were there back in 2009. We did some pretty sweet hiking, but this movie makes our hikes here total peanuts compared to what climbers Alex Honnold and Tommy Caldwell did on their adventure: they traversed the seven pinnacles of the Fitz Roy in one go … It’s one hell of a crazy adventure, also because they make it seem so “easy” yet they were the first ones in the world to accomplish this. What made the movie extra special is their sense of humor and the fact that it’s not only their mission was accomplished but also the fact that finding a weather window in this part of Patagonia is pretty much mission: impossible. A seven minute preview of the movie can be found here! 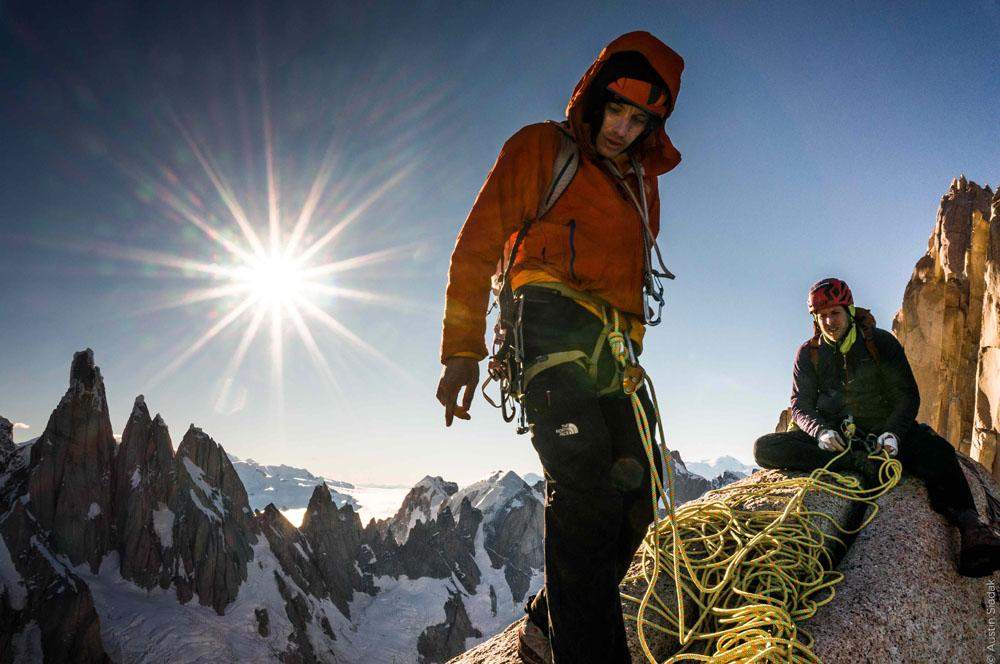 The European Outdoor Film Tour started last night in Amsterdam and will have 300 venues in 14 countries all across Europe during the months of October and November. For more information, location and dates, please visit the official E.O.F.T. website.

Want to read more? You may like these posts:
– Hiking Patagonia: to the base of Cerro Fitz Roy
– Movies that inspire us to travel
– The ultimate New Zealand itinerary for Outdoor fans

[Disclaimer: although we received free tickets for the premiere, we did not receive any payment or other means of compensation for writing this article.]
Thank you for sharing!