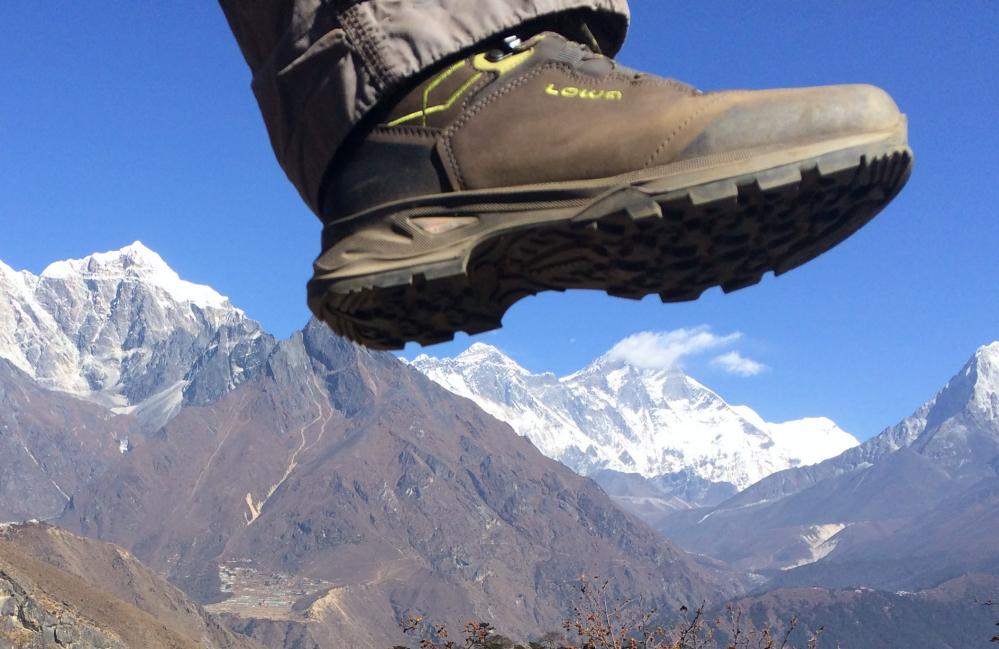 As a true outdoor junkie I’ve by now found out that I can’t live with just one single pair of hiking shoes. Or two pairs. Even three pairs isn’t enough. Each activity needs its own hiking shoes so when Lowa asked me to test their new Lowa Lady Light GTX hiking shoes, I couldn’t resist the offer. This shoe is, as the name indicates, ultra light and very suitable for a trek to Everest Base Camp, which happened to be coming up…

The thing with hiking shoes is, that they are generally large and lump. And very heavy. As a result, I usually find myself wearing them on a flight because they are too have to put in my checked luggage, which is in fact a typical Dutch thing to do. I hate wearing my hiking shoes on a flight so when the Lowa Lady Light GTX’s are delivered, I’m instantly happy about the weight of them! I can easily put those in my checked luggage as they are a lot lighter than my similar hiking shoes. The actual plan was to hike the whole trail on my lower hiking shoes, but after seriously injuring my ankle last summer and taking quite a while to recover, I realized I needed ankle high shoes to safely make it through this 15-day trek. I wear them while hiking through the city park, take them with me across the Moselsteig in Germany and bring them along on my hiking trips to the Veluwe, the biggest natural area in The Netherlands. My new hiking shoes are ready to beat Everest Base Camp in Nepal!

Everest Base Camp Trek is not difficult but it’s pretty exhausting. Not just because of the duration (our trek was 15 days) but also because of the altitude. Breathing in and out at more than 4.000 meters is a real challenge and at such a moment, you don’t really want to have sore feet as well. Although I was a little sceptic about blistering my feet with my relatively new shoes, I can proudly tell you that, even though I hiked 15 days in a row, I did not have one single blister! 1-0 for Lowa!

When you arrive at the teahouses, the first thing you do is take off your hiking shoes, which are replaces by Crocs or other sandals while you’re indoors. In most cases, the second thing you do, is pull up your nose because of the horrid smell coming from your hiking boots, especially if you have been wearing the same socks for 5 days in a row. To really test the shoes, I had to put in my nose and smell them. Not something I was looking forward to but … it wasn’t as bad as I thought because, even after 15 days, all I smelled was still a little bit of novelty, while my socks actually smelled like … oh well, I think you guess. Something with uhm, cheese! 2-0 for Lowa! 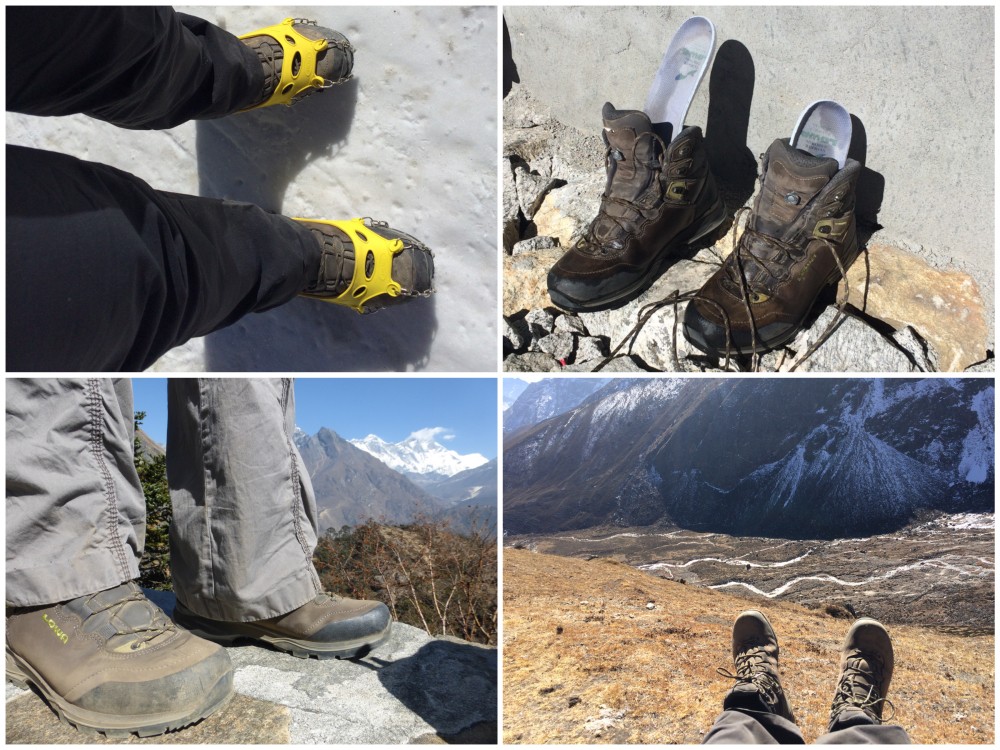 The most important thing I was testing the Lowa Lady GTX Light shoes on was of course the performance in mountainous terrain. Let’s face it, hiking through a city park is not exactly trekking through the Himalayas. This trek was going to be a real challenge for both me and the shoes. My previous experience with Lowa’s (my first pair of hiking shoes ever was Lowa as well!) is that their soles are relatively slippery. Maybe it’s just me, but since I wear Meindls I slip a lot less than with my previous pair of Lowa’s. I’ve been wearing those all around the planet but always found myself sliding down the hill when there was a lot of mud or scree. In Nepal we climbed 5.368 m. high Cho La Pass (according to Lonely Planet one of the most head-breaking mountain passes in Nepal), we crossed glaciers without even wearing crampons and hiked across frozen waterfalls. Only once I slipped and that was because the soles got clogged up with mud, so I had no more grip. Lukcily it was a soft landing. On the last day, I also slipped 4 times but that simply was because I was exhausted. So that’s 3-0 for Lowa! 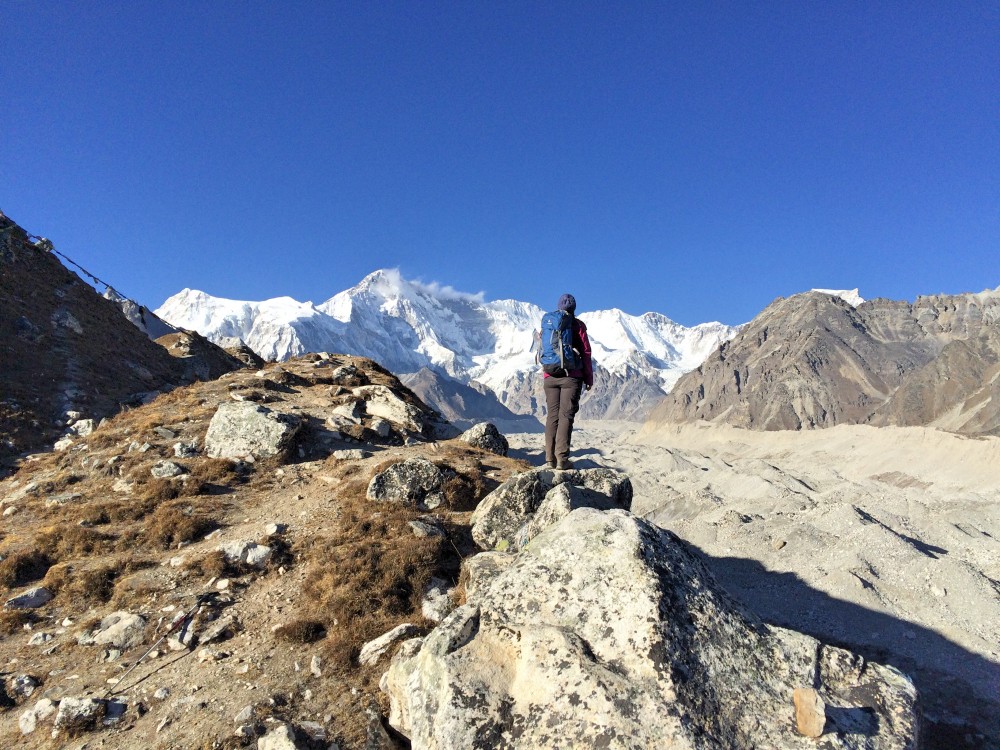 These are my new favorite ankle high hiking shoes! As I said before, I was a little scared of attempting to trek 15 days through the Himalayas with relatively new shoes but you know what, sometimes you just have to risk it and it served me well. Our next trip is to Tasmania (leaving in a couple of days) where I’m going to hike and bike around for a month (follow us with the hashtag #we12tassie). I had first planned to hike the Overland Track on my Meindls but I’ve changed my mind. The Lowa Lady Light GTX shoes are lightweight, ankle high and ready to start a new adventure Down Under. After all, as you can see on the cover pic, they even made me stand on top of Mount Everest. Well, almost, that is…

Update in November 2018: I’m still wearing these boots each time I head out on a multi-day hike. I used them again on my trek to Annapurna Base Camp as well as the Kungsleden in Sweden last summer. So they are definitely worth the investment!

Interested in buying these shoes? I found the best deal for you on Amazon.com

Disclaimer: this post contains affiliate links. In case you buy something through our website, we will earn a small commission without extra cost for you. Thanks for considering!