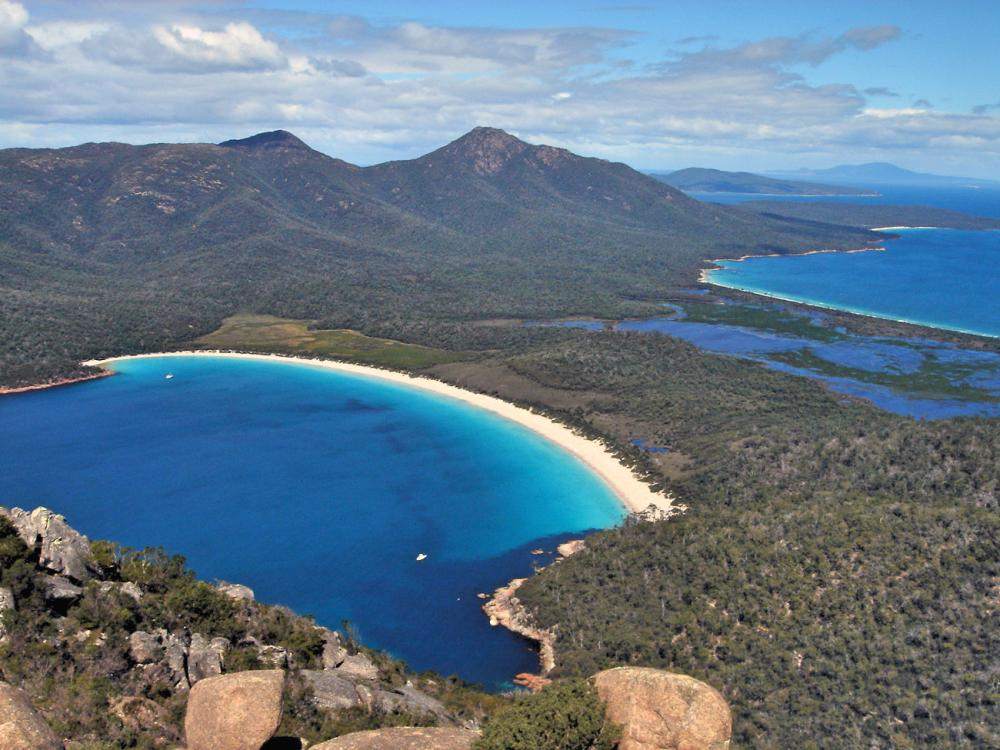 Only a couple more nights and we’re in Tasmania, Australia! Also known to us as ‘the other end of the world’. Until recently I was telling people ‘we’re going to Tasmania’ but at some point, somebody asked me ‘isn’t that near Africa somewhere?’ and I realized that what had become no more than logic for us, it was not for others. Tasmania had found its way into our daily lives, yet little people know about it. So here’s a some information about Tasmania, how we got the idea to go here and what the hell we are going to do there.

Being total travelbrats who have been all over the planet, we figured everyone knows where Tasmania is. However, it turned out not everyone does and we forgive you! If you’d ask us about some kind of island in Asia, I probably wouldn’t know the answer either. Anyway, Tasmania is an island state in Australia, separated by the mainland from the Bass Strait. It’s roughly twice the size of The Netherlands (just to give you an idea) and named after the Dutch explorer Abel Tasman, who reported the first sighting of the island in 1642. The highest point is Mount Ossa (1.617m.) and the capital is the city of Hobart, located in the south of the island.

After doing a 5 month backpacking trip through Australia and New Zealand back in 2002-2003, I knew I had to go back one day to see all the things I hadn’t seen. The original plan was to do a 3 month trip combining Western Australia, Tasmania and (again) New Zealand but we gradually changed our mind, eventually deciding it would be better to see everything separately. So back in 2011 we went to New Zealand for six weeks and now we figured it was about time to go to Tasmania. Martijn is actually the one who raised the idea to go here first. As you may have read before, we take turns in picking our next destination for our far-away trips. I chose the USA in 2013, Patagonia in 2014 was a mutual decision and the original plan was to travel to Tasmania in 2015 as it was Martijn’s turn to pick our next destination. However, I only wanted to go if I’d get 4 weeks off from work because it’s too far away (and too expensive) to go there for just 3 weeks. I couldn’t get off for 4 weeks in 2015 (so instead we went to Nepal) but I got 4 weeks approved from mid-Feb until mid-Mar so off we are!

The journey will be a long one! In fact, I think it will be the longest one ever. First we’re flying from Amsterdam to Singapore in 12.5 hrs, then we’ll fly to Melbourne in 7.5 hrs and our last leg will be onto Hobart, which will be just about 1.5 hrs. In total, we’ll be on the way for 26 hours. Good thing is that we’ll arrive just before midnight local time so we can hop straight into bed and sleep long. Tasmania is 10 hours ahead of our time so we’ll be jetlagged and broken for sure. After arrival we’ll spend two nights in Hobart and after that, the real adventure will begin!

Our original idea was to cycle all around Tasmania, but as we also really wanted to hike The Overland Track, we soon realized we had to combine biking with hiking. As the summer is coming to an end by the time we arrive, we decided to hike the Overland Track first. This hike has been one of the treks highest on our bucketlist ever since we first heard of it. It’s a 6-day trek through Cradle Mountain National Park and we’ll be camping along the way. It will be a bit of a challenge because we never carried food for this many days before (oatmeal 6 days in a row, gross!) but we’re really looking forward to it.

Next up is our cycle adventure along the east coast, from Launceston back to Hobart. It will take us some 8 days and it will be our longest cycling trip ever! We originally planned to bring our own bikes, but eventually we teamed up with Bim Bim Bikes and Green Island Tours Tasmania who will provide us with rental bikes for this trip. I’m most looking forward to seeing The Bay of Fires and Binalong Bay as I’ve seen amazing pictures of this area.

During the last week of our trip, we’ll rent a car and roadtrip across to island. We haven’t made an exact itinerary as we also want to let it depend on the weather, however we plan to see various national parks such as Freycinet NP, Field NP and Hartz Mountains NP. Of course, we want to go hiking there but if anyone knows any other cool outdoor activities we should definitely include in our itinerary, please leave a comment below! The rental car will be provided to us by Sunny Cars!

Martijn doesn’t do goals, but I do. Here’s a list of things I really want to do in Tasmania:
– Climb Cradle Mountain (please let the weather be good!)
– Take a selfie with a kangaroo
– Cycle the east coast without too much butt-aches (I bought a super expensive cycle pants!)
– See Wineglass Bay in Freycinet National Park
– Avoid stepping on a poisonous snake while hiking
– Step into the sand and enjoy a sunrise or a sunset (will be hard on the east coast though)
– Shop for outdoor gear at Kathmandu outdoor store

But most of all, I want to enjoy myself in every way I can. I don’t want to think about the blog too much (don’t worry, I’m carrying my Macbook and will regularly do some posts) and I don’t want to worry about anything other than what’s happening at the current day. I want to feel free as a bird for one month. Yeah baby, see you soon Tasmania!

Want to read more about Tasmania? I really enjoyed 19 Places to visit in Tasmania by yTravelBlog. And a while ago, we also published a guest blog about Freycinet National Park.

By the time you’re reading this, we’re packing and we may even be up in the air already. If you are curious about our adventures, be sure to follow us on Instagram, I’m @we12travel and Martijn is @martijn.we12travel – also make sure to like our Facebook page and Twitter for live updates. If you look for #we12tassie you should be able to find us there. See you later!

Want to read more? You may also like these:
– How to survive the world’s most dangerous airport
– 5 Really cool and cold things to do in Alaska
– The best (half) day hikes in New Zealand