We’ve been home for nearly a week now. The bags have been unpacked, the laundy has been done and the jetlag … well yes, that one is present, too. About the first two weeks of our trip in Tasmania I published blogs with pictures but while hiking and cycling, we found out that the best way to discover Tasmania is actually by car. By foot we hiked the famous Overland Track, by bike we cycled along the picturesque East Coast but both times we actually just saw a small bit of the island. While cycling we would sometimes cover a distance of 75 km a day without passing any significant towns and a visit to a national park ‘just 15 km down the road’ became quite a challenge rather than just a side trip. Even though we really enjoyed this new way of travel for us (it was our first ever real cycling trip), a rental car offers a bit more freedom to go wherever you want. While hiking and/or biking, you carry everything so that means you travel with little luggage (light = right) and so you depend on shops along the way, for example. Just pitching up your tent on a nice spot is not something you can do each day because generally we didn’t carry a lot of groceries with us. With a rental car, it doesn’t really matter where you pitch your tent or how much you carry, you just dump it in the trunk of the car and drive. When you pass by something beautiful you stop and if you find a nice spot for the night, you can easily stay there.

During our Tasmania roadtrip we tried not to plan too much ahead. As the weather wasn’t exactly in our favor during the first part of our trip, we wanted to chase the beautiful weather where possible. This was our itinerary for the 8 day roadtrip we made:

We started our Tasmania roadtrip with a visit to the Tasman Peninsula, where we spent an afternoon in historic Port Arthur, a former British convict settlement. Very impressive! We also made a beautiful hike here to Cape Hauy, the last piece of land before the South Pole, and camped at the scenic Fortescue Bay. During the hike we came across our first Tiger Snake, very exciting yet a little scary since it’s the third most poisonous snake in the world, just so you know… 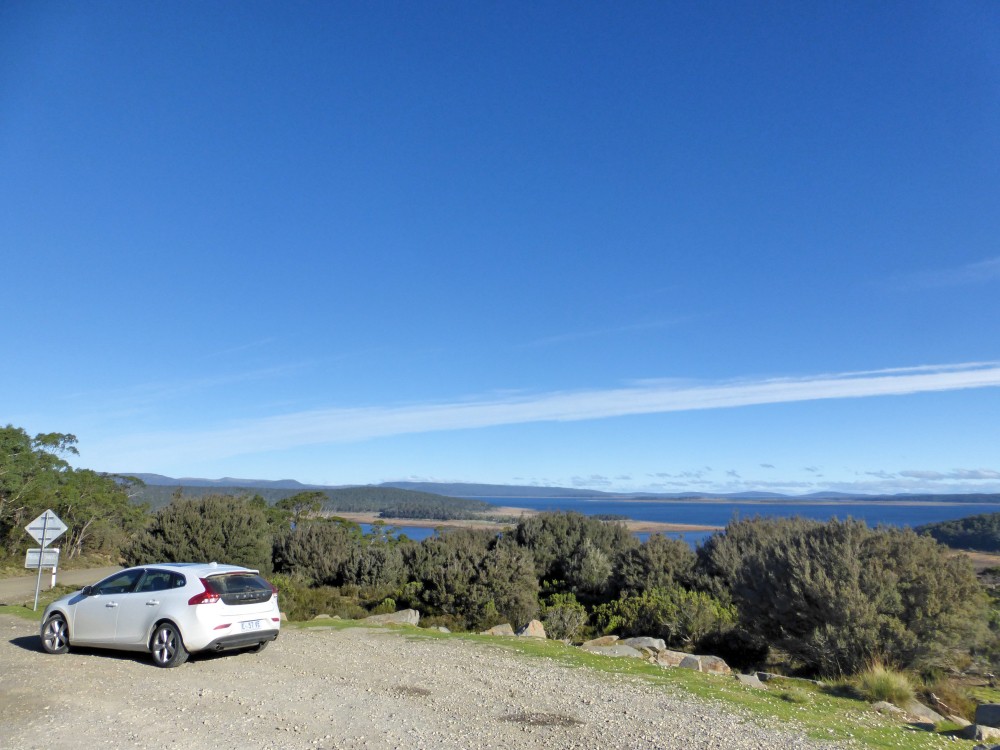 The next stop was once again the East Coast, this time we visited the famous Freycinet National Park, which I think is the most visited national park in Tasmania, together with Cradle Mountain. During our bike tour we didn’t have time to stop here so during our roadtrip, we scheduled a full day for a visit. In the morning we first hiked up to the Wineglass Bay lookout (quite disappointing if you ask me!) and afterwards we climbed Mt. Amos. In the afternoon we decided to take it easy and hang out at Honeymoon Bay to enjoy the last bit of sunshine, as the weather was bound to change that evening. I think I enjoyed it a bit too much because I ended up with a sunstroke and spent the rest of the evening and the next day in bed feeling unwell. Learning moment: always wear a hat when out in the Australian sun…

From Freycinet we drove back towards the Bay of Fires. We had already stopped here during our bike tour but only saw the southern end near Binalong Bay, this time we wanted to see it properly. Unfortunately the weather had changed as predicted and so it was a little disappointing with the dark skies, plus the best red rocks are definitely located near Bingalong Bay anyway. From here, we drove up to Derby in the middle of the mountains, where Martijn rented a mountainbike and rode some tracks of the Blue Derby Mountainbike Trails, which are said to be some of the best MTB tracks in Australia. As I was still recovering from my sunstroke, I spent the afternoon in a local cafe writing some blogs and observing other visitors.

After Derby we drove back up to the coast, this time to Mount William National Park, all the way up in the North East of the island. We were advised to do this by one of our readers via Twitter and it turned out to be a golden suggestion because there was nobody else on our campsite that evening. Every now and then a wallaby would pass by the car or the tent but other than that, there was nothing, just an endless sandy beach with beautiful skies and waves. No mobile coverage, no sounds other than those of nature … The next morning we wanted to hike to Mt. William but as I still wasn’t feeling well, we decided to do the Kangaroo Drive instead, where we saw a lot of kangaroos (surprise) and wallabies. 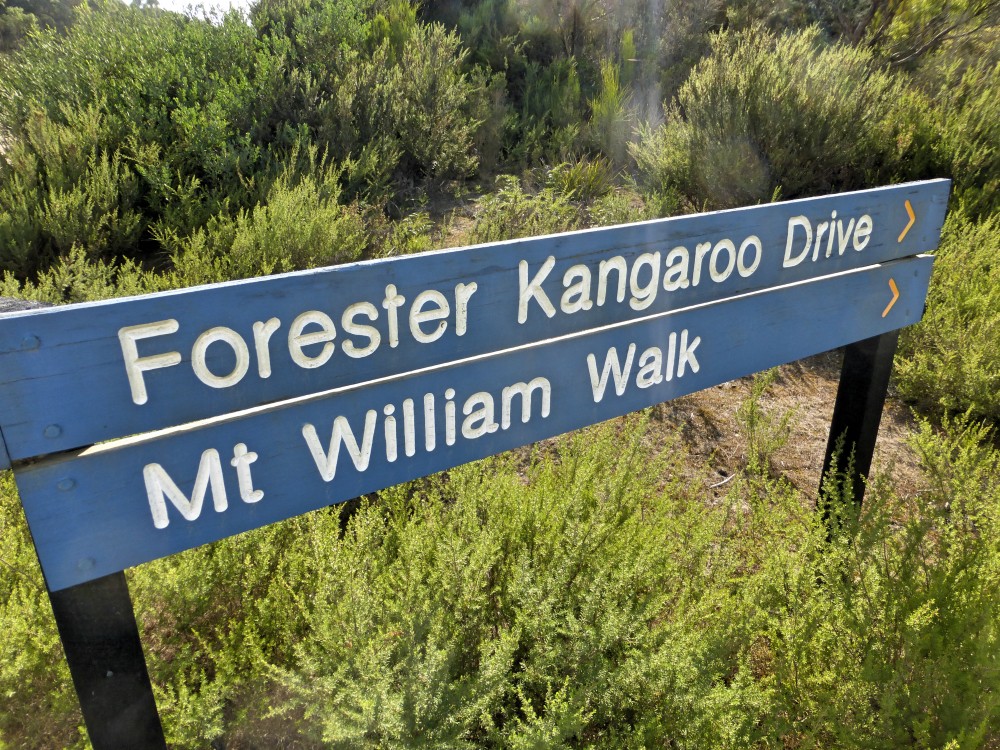 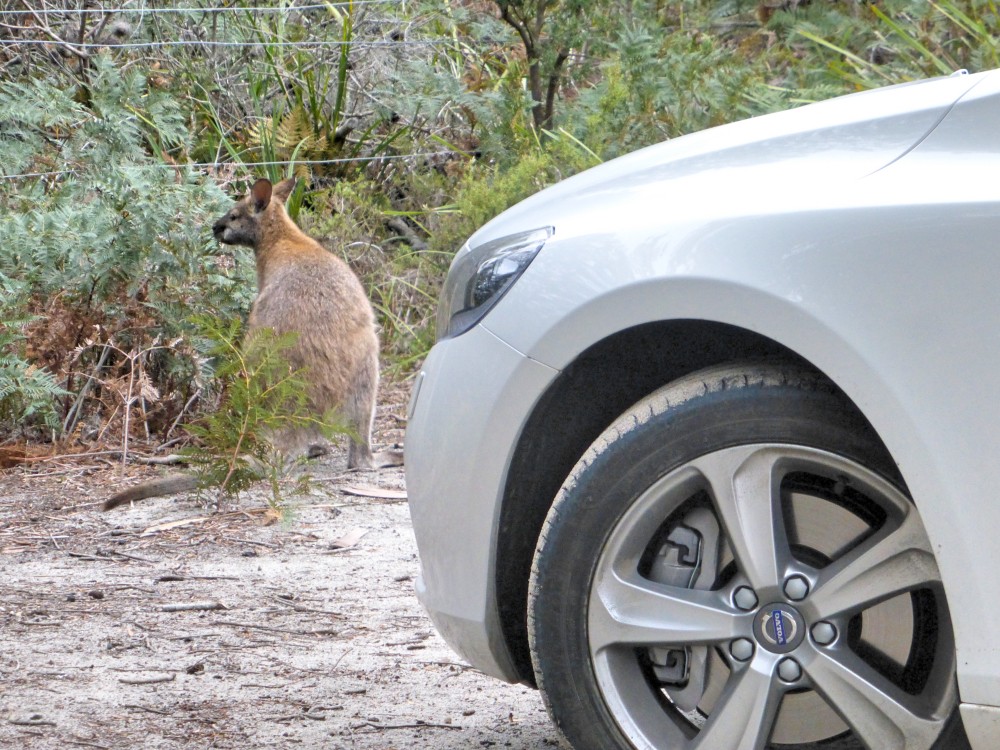 Our next stop was central Tasmania located in the highland area, at approximately 1.000 meters above sea level and next to Cradle Mountain and Lake St. Clair National Parks, where we had been earlier during our trip. There are almost no tourists here because there’s little facilities such as shops, campsites and hotels but oh la la, it was goooorgeous! Our first stop was at Liffey Falls (which still receives quite some visitors because it’s easily accessible), a beautiful waterfall in the middle of the forest. From here, we drove up to the highlands and told the navigation to take us to Miena, the next town on the map. She wanted us to take a detour but since there was a road on the map, called The Highland Route, we decided to go for that, which turned out to be the right choice. ‘The nav said no but the map said go!’

And so we ended up on an unpaved but well maintained road. It was a gorgeous drive and there was almost nobody else. We pitched up our tent at Little Pine Lagoon which actually has a campsite but there was nobody else and so we spent another night in ultimate silence. When Martijn woke up in the middle of the night, it turned out that it was freezing, while it was actually still summer… As I said, it was extremely quiet. No other people, no cars passing by, not even the sound of wallabies or wombats in the bush. It was just us…

Our last days in Tasmania were spent around Hobart. We visit Mount Field National Park where we took a hike to some beautiful waterfalls and camped in silence at the isolated Base Camp Tasmania, where we finally got the chance to take a shower again after a couple of days. We drove up to Mount Wellington but it’s cloudy on top so decided to head back down again within no-time. People told us that going up would make no sense if you can’t see the top from the city, but of course I didn’t believe them. Trust me though, they were right… We spent the rest of the afternoon in the old part of the city, had a burger near the waterfront and spent some time shopping, before preparing for our last night in Tasmania…

If you really want to see Tasmania, you should definitely travel with a car or a camper. Although we much enjoyed travelling by foot and by bike, a car of camper will get you much further and allow you to see more. We also tried the public transportation but weren’t too happy about that, as the routenetwork is limited and the schedule isn’t exactly plenty.

During our Tasmania roadtrip we rented a car through Sunny Cars. We have rented with them before while roadtripping in the USA and Norway and the good thing about them is you always rent with a reliable company (in our case Europcar). Our main reason for choosing Sunny Cars however is because they have a payback rule of the deductible, which means that you won’t have to get additional insurances on the spot, which can be very expensive and if you have damage that is not covered on the insurance issued by the rantal company, this extra insurance will cover it.

[Please note: driving on unpaved roads is not insured via Europcar, we did this knowing we were not insured. Make sure you check this before renting and decide whether you want to risk it].

This was the itinerary of our Tasmania roadtrip. It was a truly memorable one and we have so much more to tell and pictures to show. For now, if you want to read more, you may also enjoy fellow Tassie lover Flights To Fancy’s post about her Tasmania Roadtrip.

Other reads on We12travel you may enjoy:
– Hiking the Cape Hauy Track in Tasmania
– Snakes in Tasmania: how to avoid them when outdoors
– Things to do in Tasmania that are not outdoor adventures