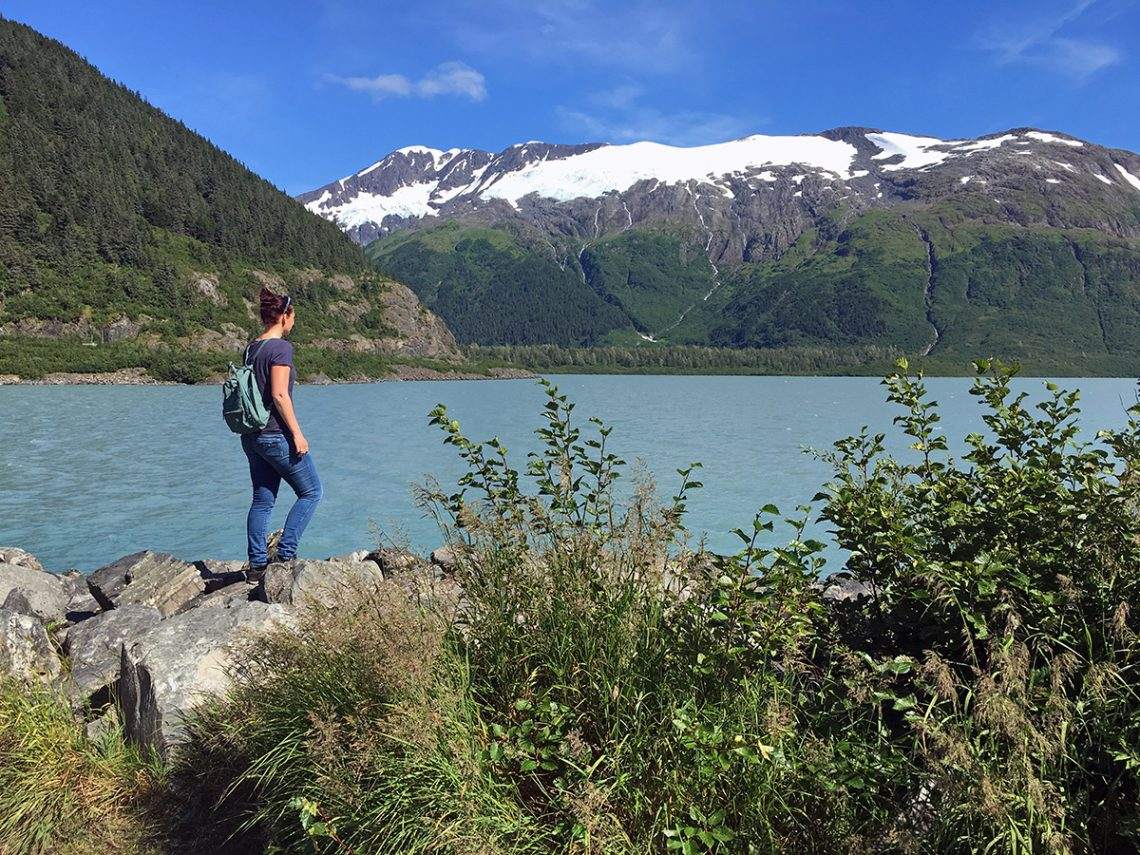 Having been to Alaska no less than seven times over the past 15 years, I think I can give quite an accurate point of view what it’s like to solo travel in Alaska as a female. Not all my trips have been done solo, some have. Note that this article is written from a European point of view. I’m from The Netherlands and have been incredibly lucky to have been to Alaska so many times. In this article I’ll be writing about the part of Alaska that can be reached from Anchorage, so not the panhandle that you’ll visit with a cruise. I’ve solo hiked in Alaska, driven a rental car, went on tours and flew on bushplanes as a passenger. Enjoy reading and preparing your trip to Alaska!

Solo travel in Alaska – yes or no?

Is Alaska safe to travel alone? Definitely yes! However there are a few things to consider before going to Alaska, such as booking the majority of your tour ahead and some wilderness guidelines. If you have solo traveled in the United States or Canada before, you may notice some similarities with solo female travel in Alaska. It’s still America after all and the basics are the same. If you want to stay safe, stick to the main roads or trains and you’ll be just fine. Those places are not as ‘dangerous’ as television may make them seem.

To be honest, I’ve never done any cruising other than a day trip to a glacier or taking a ferry to get from A to B. In Alaska you won’t find a whole lot of public transport so your best option is to rent a car. This will be great for two reasons:

1. You have all the freedom in the world to stop along the way and take pictures
2. Many awesome places cannot really be reached by trains or the incidental coach service

I found driving in Alaska more relaxing than in Europe. The roads are quite empty compared to here. If you stick to the main raods (= paved roads) you’ll be just fine and there’s no need to be worried. There may be an incidental pothole or gap in the pavement, but from June until mid-September the major roads are just fine to drive. Those are the road from Anchorage to Fairbanks, Fairbanks to Valdez and Valdez back to Anchorage, as well as the roads to Homer and Seward on the Kenai Peninsula. Unpaved roads such as the Denali Highway and the McCarthy Road should be even be attempted with a rental car.

Trains and buses and planes

Other transportation options include the Alaska Railroad from Anchorage to Fairbanks and Anchorage to Seward. I traveled by train for a bit but to be honest I was a bit annoyed by the fact that the train kept on running and I couldn’t really take any photos. Although train travel may seem scenic, it wasn’t my favorite way to travel. There’s also a few bus operators and if you really wish to travel the fancy way, take bushflights. I’ve been on various bushplane services to Lake Clark National Park and Katmai National Park, as well as a scheduled flight from Valdez to Anchorage and scenic flights.

The people in Alaska

I love Alaskans. Women and men. Even though the men may seem scary at first with their beards and long hair (sorry guys!) the majority of Alaskan men I met are super friendly and helpful. I’ve had really nice chats with them at bars without ever feeling awkward. I once asked a guy to remove a dead bird from the grill of my car after I hit it and generally, the Alaskan men are always super willing to help out. Being from Europe, it’s a conversation maker why you’re in Alaska. People I’ve met are generally friendly and easy to talk to. You’ll also meet plenty of other tourists, mostly those from cruise ships. I never felt lonely in Alaska at all.

If you wish to go solo hiking in Alaska, I suggest you head out on some well trodden trails rather than into the backcountry. Even those trails can still feel quite exciting and even scary at times, given the fact that there’s bears all over. If you are unconfident about solo hiking, try to join a guided hike or see if you can find some people to tag along with at a parking lot. When on my solo hiking at the Harding Icefield Trail I got to chat with a guy from Seattle while hiking back down to the car. I even gave him a ride back to Seward as he didn’t have a car. We were both happy to hike down through the bush together.

The majority of beautiful places can be reached by going on organized tours. The national parks in Alaska don’t really have roads or sights to be visited such as the national parks in the Lower 48 and most visits include transport by bus or boat. Going on a tour is definitely the best way to experience Alaska at its most beautiful and will complete your experience.

Great tours that can be done and some of my personal favorites are ice climbing in Wrangell St. Elias National Park, a Denali tour bus and the Kenai Fjords Cruise out of Seward.

About places to stay on your solo trip to Alaska

There aren’t many hostels in Alaska and those that I’ve seen weren’t very awesome. I’ve mostly just camped or stayed in hotels or motels. Airbnb is also a great option. Make sure to book your overnights well in advance as Alaska is open for tourism all year round but tours and excursions are not. June until mid-September is your best bet and accommodations will fill up quickly. Check prices and availability here.

Some final thoughts about solo female travel in Alaska

Although the mountains are higher and the bears bigger, I found solo female travel in Alaska not as scary as it seemed like at first. It’s quite like traveling in the United States and Canada, with limited public transportation yet stunning nature. As mentioned, book a car, go on tours and don’t forget to enjoy it! You will love Alaska and after coming home, I’m sure you’ll want to visit there again and again, just like me.

I hope you found this article about safe solo female travel in Alaska useful. Please feel to ask me any questions below in case you want to know more.

Note that this article contains affiliate links. If you make a purchase through such a link, I may receive a small commission at no extra fee to you.