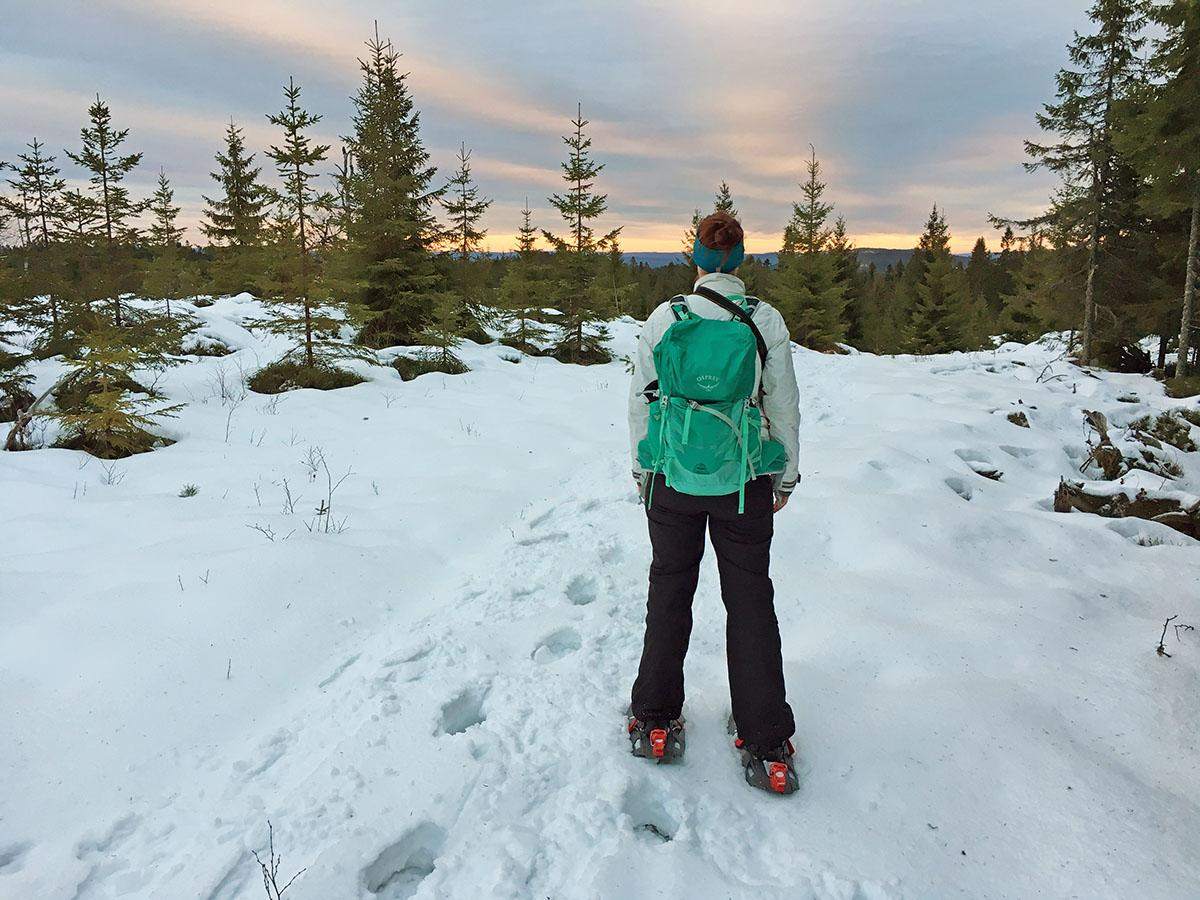 Snowshoeing in Sweden on Branäsberget

It had already been quite a few years ago since I walked on snowshoes for the last time and so it was about time again. During my recent trip to Sweden, I grabbed a pair of snowshoes and started hiking again. Here’s my first blog about my outdoor week in Värmland and about snowshoeing in Sweden.

Whenever I tell my friends I have been snowshoeing, they usually have no idea what I’m actually talking about. We barely get any snow in The Netherlands and so nobody really knows what snowshoeing is. My first experience with snowshoeing was when I visited the Italian Dolomites. I also walked on snowshoes for a bit in Finnish Lapland and that was about it. It is in fact quite popular though, just check #womenwhosnowshoe on Instagram!

Snowshoeing is an easy way of walking through thick packs of snow using special shoes. Shoes may not be the right name for them though, because they are more like spaceships you tie underneath your hiking boots. You step into a sort of shield, tie your shoes with various bindings and make sure the back comes loose so you can easily move throughout the snow. The snowshoes have various spikes (like crampons) so you have a lot of grip especially when climbing and descending in the snow. 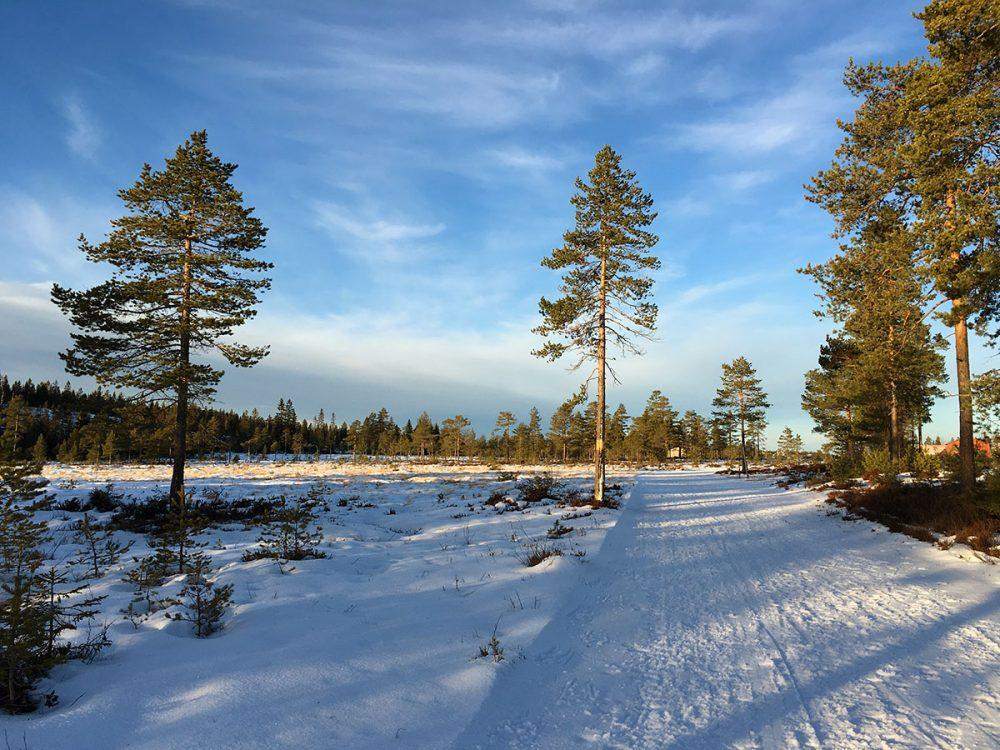 From the house I stay at while in Sweden, it’s about a 45 minute drive to Branäsberget, a ski resort in Swedish Värmland. It’s a clear day, my first day in Sweden, Christmas day and … my birthday! Although I feel anything but the birthday girl, I’m happy I can still do something fun and outdoorsy today. Snowshoeing in Sweden it is!

After a quick visit to the information center at the bottom of Branäsberget for a hiking trail map, it’s time to drive up to the top of the mountain. Well, mountain may not be the right name, it’s more like a hill, as the top of Branäsberget is 567 meters above sea level. We get out of the van at the Mountain Lodge and decide to first hike a 1.5 km trail on the top of the mountain. We finish within 30 minutes and so we decided that we’ll do another 5 km lap. But first things first, I need to feed myself and drink some hot tea… 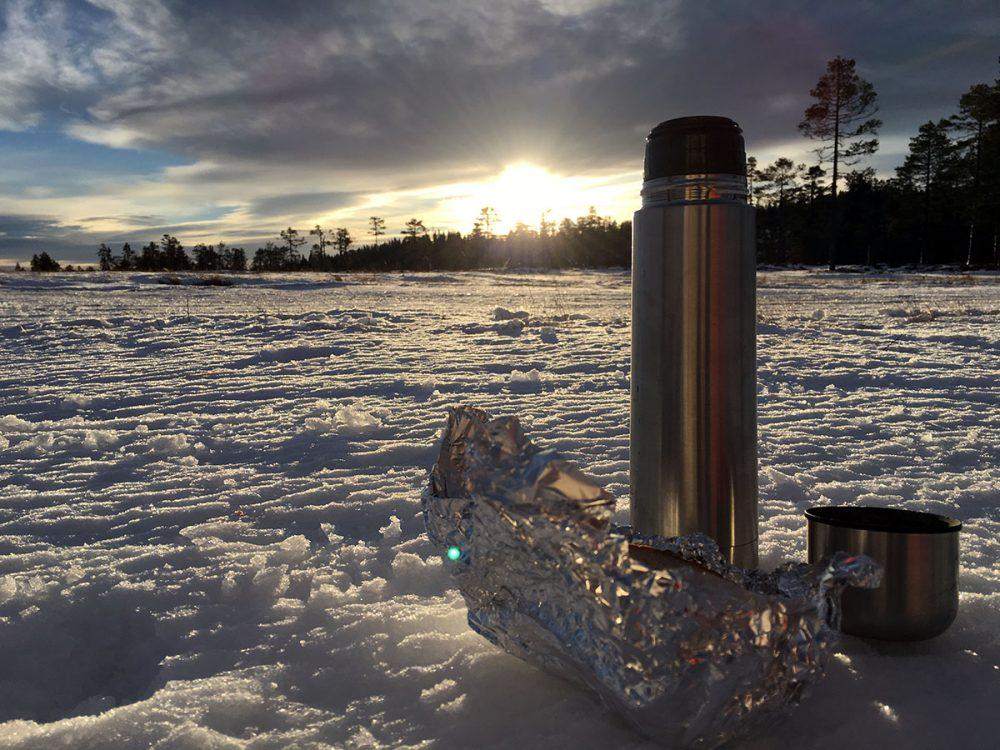 During my lunch break it’s about 2 pm only but the sun is pretty low already. It’s not too cold and the sky is blue. I love hanging out in the snow but once you’re still for too long a time, you’re cooling down so it’s time to get moving again. Having said that, getting up from the soft snow while wearing snowshoes can be a bit of a challenge because they are lump and large. And so I fall down again, knees and face into the snow. It’s soft and there for it doesn’t really matter.

The first lap was peanuts and so it’s time to get into the Swedisn wilderness a bit further. By now the sun has disappeared behind the trees and not much later, it’s gone for the day. Once we leave the shorter track, the snow becomes softer and deeper. Now we’re talking! The hike is easy yet fun. Sometimes there’s a steep climb, sometimes there’s a descent, sometimes the view from the top is just stunning. Hiking on snowshoes is quite different than regular hiking and I kind of feel like Donald Duck with my legs a bit wider than usual, to make sure my shoes don’t get stuck into my pants.

Once you get into the rhythm it’s actually quite fun. Unfortunately there isn’t enough snow to really experience the ‘Tiefschnee’ but then again I look at it from the sunny side: it’s good enough because last year around Christmas, they did not have any snow here at all. At the top of the hill I take a short break. I grab a cinnamon roll (Kanelbullar’) that I took from the breakfast and take a look behind me. The sun is about to set and in front of me is nothing but Swedish wilderness. I couldn’t have asked for a better birthday. Life is good! 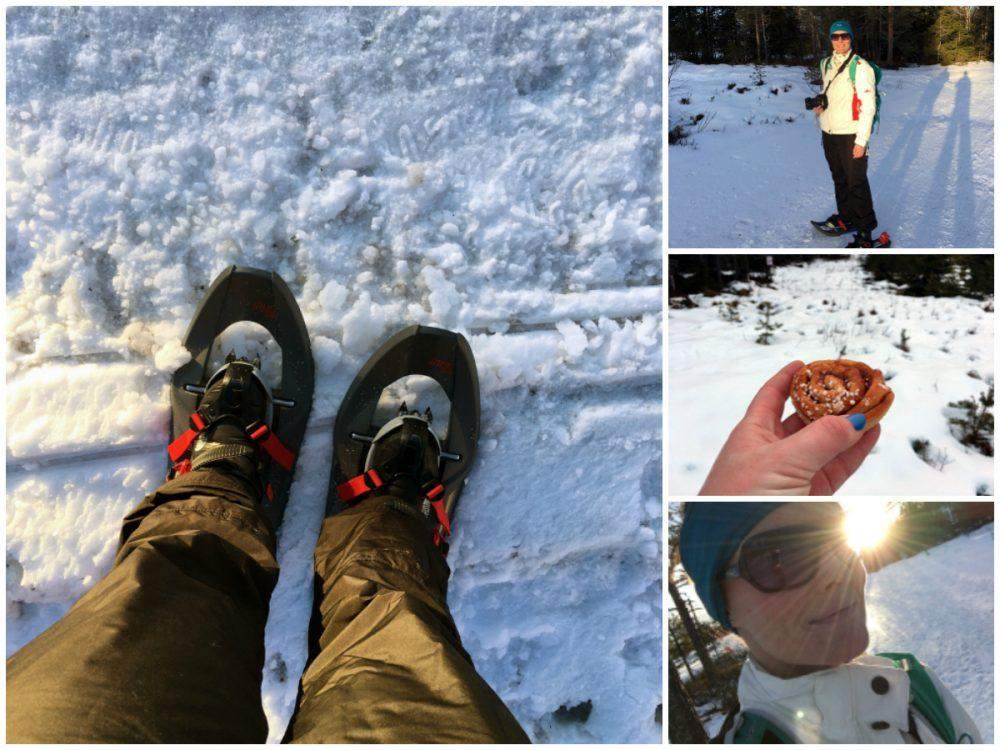 Once back at the Mountain Lodge it’s nearly dark. It’s only 3.00 pm so that makes it somewhat eerie. It’s time to warm up and drink some mulled wine. My first day in Sweden was a good one!

Tips & tricks for snowshoeing on Branäsberget

Snowshoeing in Sweden isn’t very common. At least, other than our group I didn’t see anyone else doing it. During the second snowshoehike I made, I even ran into a couple who asked me what they hell I was doing, in a kind way though. I did not find a place to rent them so in case you have a pair of snowshoes, bring them!

On Branäsberget there are no special snowshoeing trails. We hiked on the cross country trails which had not been prepared yet due to the little snowfall. Cross country skiers generally don’t like it when you break their trail so stick to the side and don’t ruin their tracks.

The walks vary in length from 1.5 to 10 kilometer. We snowshoed about 3 km/hr which is quite a bit slower than my average hiking pace. Keep in mind that it gets dark early when planning your trip, too.

You can pick up a map at the information center at the bottom of Branäsberget. They can draw the routes for you here, but they are marked along the way as well. It’s hard to get lost.

More information about the various activities on Branäsberget, as well as places to stay, snowconditions and prices can be found at the official Branäs website. 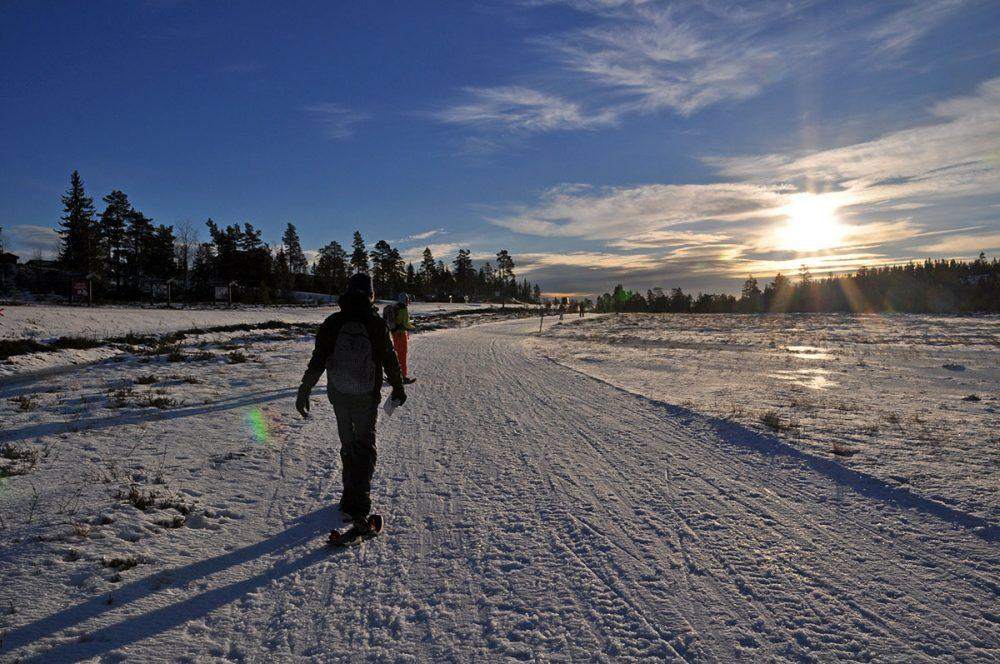 This was my first blog about my trip and snowshoeing in Sweden. Next up will be my failed attempt to stay overnight in a tee pee. Stay tuned!

Want to read more about outdoors and Sweden? Then you may also like the following posts:
– From Sweden with love: why I want to stay forever
– Outdoors Finland: 10 things to do in Saimaa
– Ice skating in Stockholm with ICE Guide