When we were discussing an outdoor trip to Tasmania a couple of years ago, the one thing that made me doubt it as our next destination were the snakes. I knew that they have plenty of snakes in Tasmania and that our chance of running into one would be significant. Now there are a few things in life I’m afraid of but when a person asks me ‘is there anything you are afraid of’ my first answer is always snakes. Ever since I was a young girl, I have had a great fear for them. Whenever we went to the zoo with our family I didn’t dare to watch them and when I saw them on tv, I put my hands in front of my eyes.

With my first trip to Australia, all the way back in 2002, I knew that it would be inevitable to run into a snake at some point. During my 4 month trip, I luckily only saw one, which was in fact on the road to Kakadu National Park, so not even when hiking or something. Oh and we went to visit the Australia Zoo where I attempted to get over my fear by putting a giant one in my neck, however as soon as the photo was taken, I screamed ‘get that thing away from me’. And I realized that by doing this, my fear of snakes was far from over.

I’ve never let my fear determine my actions and so I figured that if we wanted to go to Tasmania, that would be the plan, snakes or not. So off we were. During our first day in Hobart, we paid a visit to the Tasmanian Museum and Art Gallery which actually has free entrance and right upon entering, we saw an exhibition of typical Australian animals, including a big, fat tiger snake. I walked up to the person hosting that room and said something like ‘hey, that snake over there, we probably won’t run into one, will we?’ making a joke out of it. Then he started pointing out that they are the second most deadliest snakes in the world and that they are in fact very common to see in Tasmania. When I told him we’d be hiking The Overland Track not much later, he’d started laughing and said ‘well, you’ll have a good time there, you will certainly see them at some point’ and I felt my stomach drop to my knees… I knew that there’d be snakes in Tasmania but that we’d be running into them for sure, was another thing! 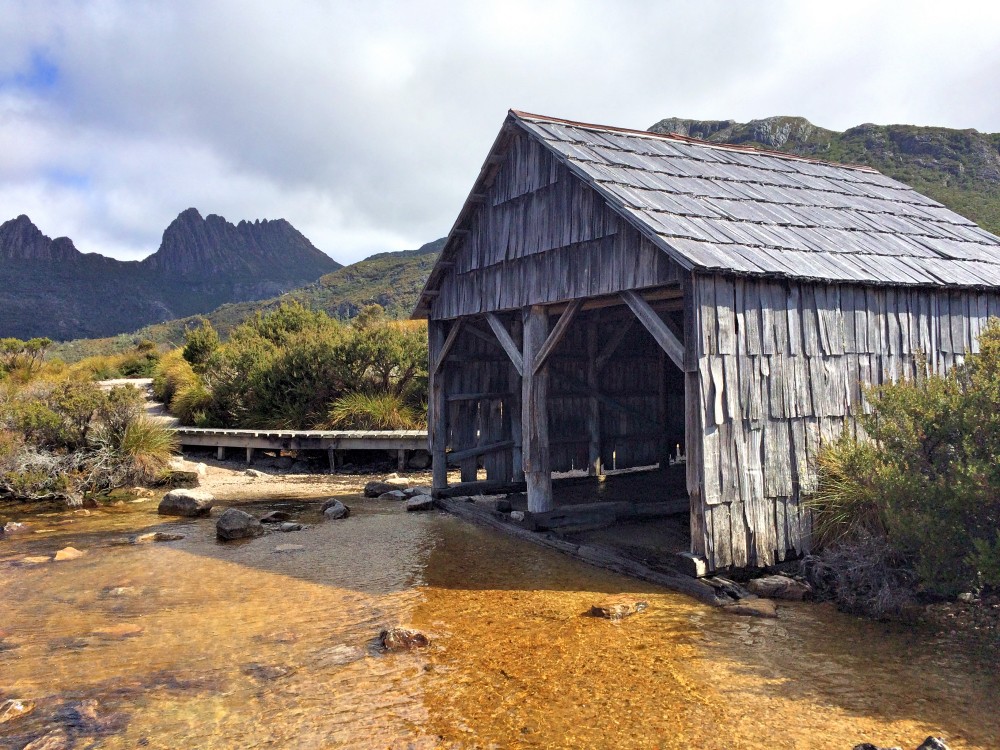 He also told us that just a few days earlier, a friend of his was working in his garden in the suburbs of Hobart and that he had felt something on his ankle. When the next day, the ankle was massively swollen, he’d gone to the doctor and as it turned out, he had in fact been bitten by a tiger snake. An urban one that is, but while we were having a picknick in one of the local parks later that afternoon, I just had to be wary all the time, making sure that there was no snake around us.

So off we went on The Overland Track, which is said to be Tasmania’s premier overnight hike. I was scared to death but somehow, we never saw one. Fellow hikers did and at some point we seemed to be the only ones (including Timothy and Sarah if I’m right?) who did not run into a snake. Especially when hiking through knee high grass I got super scared but I guess the snakes smelled my fear and decided to keep away. At some point, when I was walking a bit further up than Martijn, I think I saw a snake disappear into the bush from the boardwalk, however at the time I figured it may have been a lizard as well.

We survived the Overland Track without snakes and one of our next destinations was Maria Island, another great place for outdoor activities. We hiked through the bush towards the coast and heard people say that they had just seen a super large tiger snake a bit further down. Yikes! When we got to that point, there was nothing to see, but just a bit further down on the sandy track, there was an obvious zigzag in the sand. As it was a busy trail and the zigzag was still in tact, I’m sure the snake was there just shortly before us. Not much later, we encountered what Martijn thought was a large worm (we have large worms in Holland and many people confuse them for snakes) but I was quite sure it had been a snake.

Next up was the Tasman Peninsula and here we did the Cape Hauy hike. It was pretty early and as it was a coastal walk, I didn’t really expect to run into snakes here. However, I knew we couldn’t be traveling in Tasmania for a month without seeing a snake and that moment had to come. It did on the Cape Hauy track, I saw something slither underneath the steps of a boardwalk. I screamed at Martijn ‘snake!’ as he was a bit behind me but before I had the chance to take a proper look, it had gone. Not much later, when Martijn took the lead, he screamed ‘snake!’ but that must have set him off because this one (most likely a tiger snake) crawled into the bush. On the way back, we saw another baby snake and we even took a photo of it. At some later point during our trip, we asked a park ranger if it was a snake and he said ‘most definitely, it’s the time of the year they are hatching and so it’s very likely you will run into baby snakes at this point.’ As I was mouthing ‘see!’ to Martijn, the guy was laughing at us.

I think that given the fact we were outdoors for four weeks and camping / tramping most of the time, our snake count was very low and we have been incredibly lucky to run not into more snakes in Tasmania. However, I also took some precautions in order to do our best to avoid snakes and/or keep safe in snake areas. Here are our tips and tricks on what we did:

– Read up on the type of snakes (there are just three types of snakes in Tasmania) and how to treat a bite when out in the wilderness.
– Make sure to tell someone where you are going and when you expect to be back. There’s no cell coverage everywhere so when bitten, expect not to be able to call someone.
– Make noise! Snakes hate people and tend to avoid them. So when they hear you coming, they will usually make sure to get out of your way as fast as they can.
– Stomp! On the Overland Track and quite some other trails we did, there were plenty of boardwalks. We (especially me) used our poles to stomp and put our feet down hard, also to make the boardwalk move, which is most likely not something the snakes like.
– Wear gaiters. We didn’t (stupid!) but many hikers do. In case you will get bitten, they will have to get through the gaiter, first.
– Wear ankle high shoes. OK I didn’t always follow this rule but for the more serious hikes, I put on my high ankle shoes which are more supportive as well of course.
– Be extra careful on sunny days. The snakes in Tasmania love the heat and tend to come out on sunny days to bathe in the sun, for example on rocks or on the hiking trails.
– Remember that baby snakes are as venomous as their parents. However, as they are still young, they don’t know about real bites and dry bites yet. An adult snake will generally first give a dry bite as a warning, whereas a baby snake will immediately release its poison. There for just stay away from those as well, as they are potentially even more dangerous than mature snakes.
– That’s it!

If we can avoid snakes in Tasmania during our month in the outdoors, I’m sure you can, too. Let me know if you have seen snakes and/or if you have any other tips for travelers to Tasmania, we’d love to share them here!