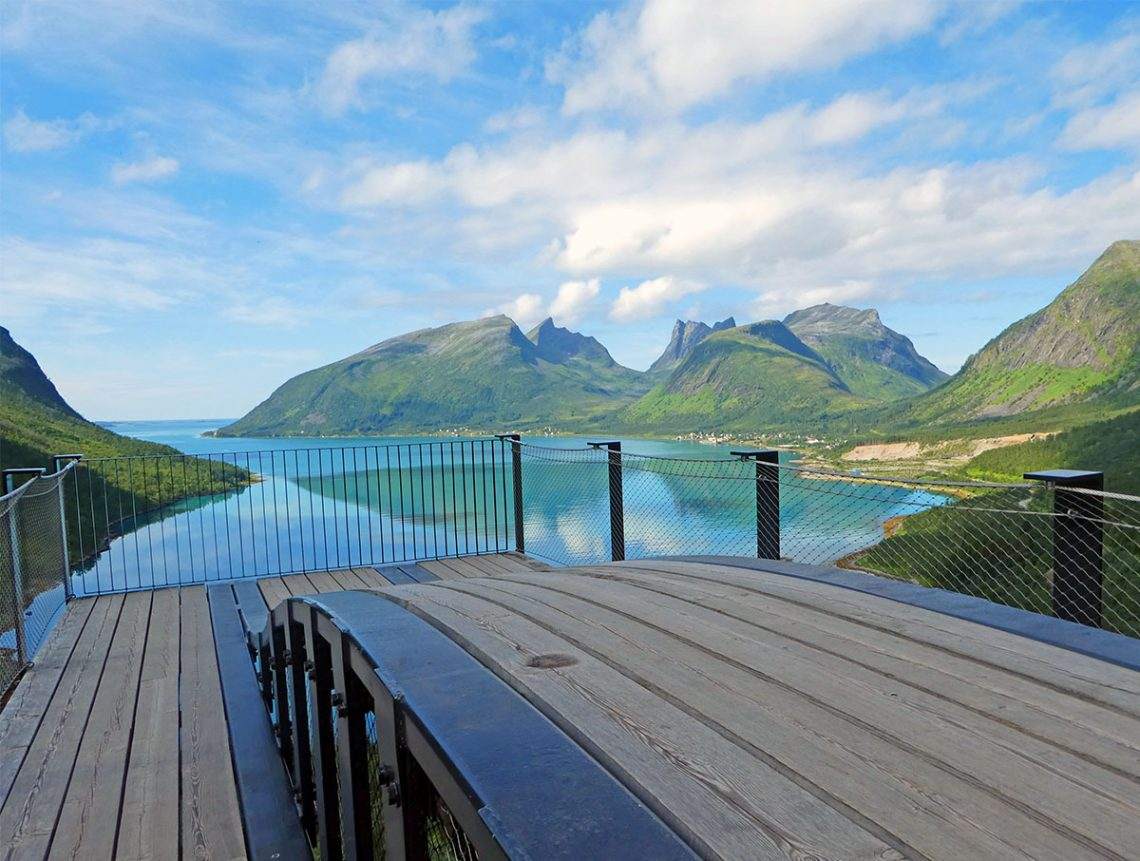 There’s destinations that fellow bloggers describe as off the beaten path or the road less traveled. Those phrases are used way too much these days in my humble opinion and in fact there’s just a few places in the world that can actually claim to be as described. I think Senja in Norway is one of them. Especially if you compare it to the insanely crowded nearby Lofoten Islands. I went to visit Senja island a while ago and enjoyed it a lot. It was super quiet (though we traveled in high season) and there was a lot to see. Only the weather didn’t cooperate, but that’s to be expected when in Norway. In this article I’ll share my travel in Senja experiences.

Senja in Norway: why we chose to go here

With the map of Scandinavia in front of us, we plan our trip from our cabin the woods. We map out a route of about five weeks, a mega-road trip from Arnhem in the Netherlands to the far north and back again. We want to walk at least one (preferably two) stages of the Kungsleden Trail in arctic Sweden and see whales. And we’d like to go to the North Cape, the Lofoten and some iconic hikes in Norway. Although five weeks seems like an eternity, with Scandinavian distances it certainly isn’t. So we have to make choices. The North Cape and the Lofoten immediately are dropped as the North Cape is too far (and I have been told quite a downer) and the Lofoten Islands are too busy. The Kungsleden and the whales remain … plus a huge approach route from the Netherlands. I get the suggestion from a former colleague to take a look at Senja as a destination: at least as beautiful as the rest of Norway but a lot less busy. Just google it and we’re all set: we’re going to visit Senja in Norway!

It’s the middle of August when we cross the border from Kiruna Sweden to Norway. We have just finished the second part of the Kungsleden trek and had a bad night in a hotel in Kiruna. We get in the car and drive to the border in just under two hours. When we arrive at the border, we refuel the Volvo once again and enter Norway. What strikes me immediately is that, unlike Sweden, there are quite a few houses here.

Senja is the largest island in Norway after Spitsbergen (Svalbard) and Hinnøya and is located north of the Lofoten and Vesterålen. You can reach the island from the mainland via the bridge between Finnsnes and Silsland. There is little to be found on the internet about Senja, nor in our travel guides. We decide to drive onto the island and look for a campsite. From there we will see what there’s to see and do.

At first I am a bit disappointed with the landscape. Look up “Senja” and you will get beautiful sharp-toothed rock formations, but where we ended up it is flat and relatively barren. The first campsite we encounter is the Senja Camping. We decide to book for two nights and then visit the island from here tomorrow.

They sometimes say that bad weather does not exist in Norway, but I can tell you that Senja is not so nice in the pouring rain. After the first night in our cabin, we open the curtains and the island seems to have been covered up in a blankte of fog and rain. The weather app does not indicate much different for the coming days and so we’re a little disappointed. We spend the first day with Netflix and beer in the comfort of our cabin. The day after it seems to clear up slightly in the afternoon, but appearances can be deceiving because once in the north of the island, where the rugged coastlines are, it is still wet and foggy.

I’m a little sad because since our preparation I was really looking forward to going to Senja. The pictures on the internet look very promising, but unfortunately little of that is visible. After a tour around the north of the island we decide to drive back to the campsite and take the boat to Vesterålen tomorrow, where we will do our whale watching excursion.

Behind the clouds the sun is shining

The next morning it appears to have cleared up. Our boat to Gryllefjord to Andenes leaves at 3:00 pm. Maybe we can still see something of the island in the morning. After we have loaded everything into the car, we drive back to the beautiful viewpoints where we were in the thick fog the day before. To Bergsbotn and to the Tungeneset and the Okshornan mountains in the distance. It will be a bit of a race against the clock because we cannot afford to miss the boat.

Still, we get a quick impression of the beauty of Senja in Norway once the clouds have disappeared and how beautiful (and peaceful!) it is here. After an intense ride, we finally arrive just before the departure of the ferry in Gryllefjord, dramatically situated on one of the many fjords that Senja has. When the ferry leaves the harbor, I look back on the island with melancholy. I didn’t want to leave at all, but unfortunately we had to keep going because the whales are waiting for us. Who knows, I might one day be lucky enough to be able to return to this special place in Norway!

Senja tips: know before you go!

Not much can be found about Senja on the internet, at least when we went here (August 2018). At the reception of our campsite (Camping Senja) we grabbed a travel guide with a route map. They only had it in Norwegian at the time we visited. I’ll give you some useful tips:

– You can reach Senja by car via the bridge at Finnsnes or by boat from Andenes (Vesterålen). Depending on the season, this sails several times a day and cannot be booked in advance. You can bring your car and the crossing takes approximately 1:40 hours. If you are not coming with your own car, it is best to fly to Tromsø and rent a car here.

– The season on Senja is short, roughly from the beginning of June to the end of August. From the end of August, most tourist facilities will close and there is little to do compared to the summer season.

– In the south of Senja lies the national park Ånderdalen, but this is not very interesting from a landscape point of view. Most visitors come for the special rocky coasts on the west and north sides of the island.

– There are few campsites on the island. We also found a camping spot in the Erstfjord. The Senja Camping is the largest with the most amenities and is relatively centrally located on the island. Accommodation is also very scarce and it is best to book well in advance. Check the prices and availability here.

– Shops are scarce and what they sell is relatively pricey. So bring enough food and drink from the mainland, there are some supermarkets in Finnsness.

– The roads are winding and narrow, this ensures that you take a long time on a route. There is one round trip around the island, namely the 861 and the 862 (in combination with the main road 86, which ends in Gryllefjord). The rest of the roads are mostly dead ends and end in a fjord. It takes about half a day to complete this tour (if you drive all the way through and make limited stops).

Hopefully you liked this article and we gave you some ideas for what to do in Senja in Norway. If you have any questions, feel free to leave them in the comments! This article contains affiliate links. If you make a purchase via such a link, we may receive a modest commission at no additional cost for you.