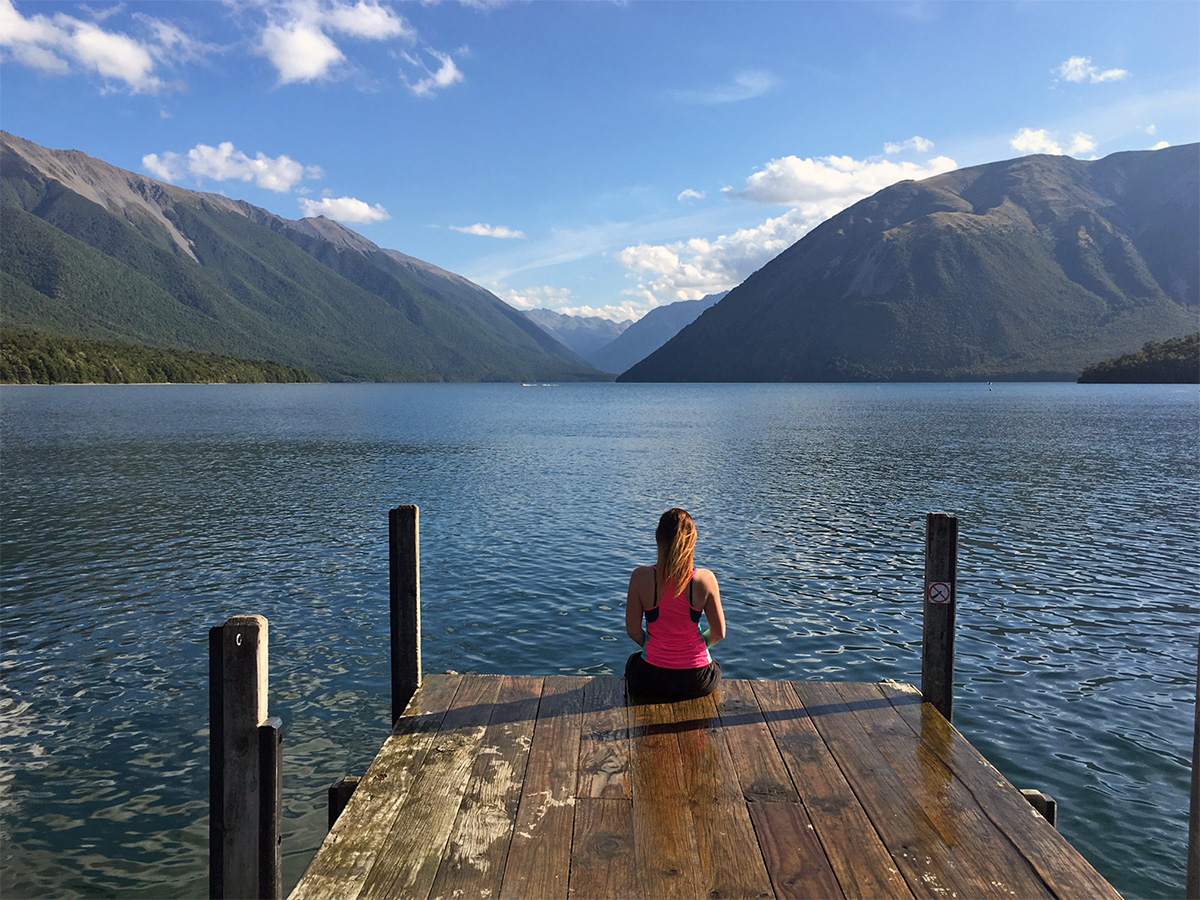 Aaaaand week three in New Zealand is a wrap. It’s unbelievable how fast time is passing by. In the old days of my life this used to be about the time I started to prepare going back home again from a journey, now I’ve still got more than two months to go. Just awesome! Today I’m telling you about my third week in New Zealand. Curious about my first two weeks? You can read all about them here.

From Taupo I drove down south to Wellington in one go. Wellington is New Zealand’s capital (and nope, that’s not Auckland in case that’s what you were thinking). In Wellington I boarded the ferry to the South Island. On the way to Wellington I really enjoyed the views on the volcanoes of Tongariro National Park. The desert road is an incredibly scenic drive right through the Rangipo Desert that shows you amazing views of the Tongariro National Park volcanoes. After Desert Road the drive became a little less interesting and on top of that, it started to rain again. And so I arrived in Wellington for the fourth time in my life, once again in the rain …

Unfortunately the weather was pretty poor during the crossing. I did this one a few times before and know how gorgeous it can be, but unfortunately there were no views at all. In Picton I had booked a hostel after another weather alarm went out, this time for the Nelson region. So after the first night I wanted to stay one more, but it turned out I was not the only one with that idea and so the hostel was fully booked. Eventually I found a place to stay in the village of Nelson, about one and a half hours driving from Picton. Along the way I picked up a hitchhiker. It’s not something I usually do, but since it was pouring down I just could not leave that girl standing out there … and eventually it turned out to be quite a lot of fun. 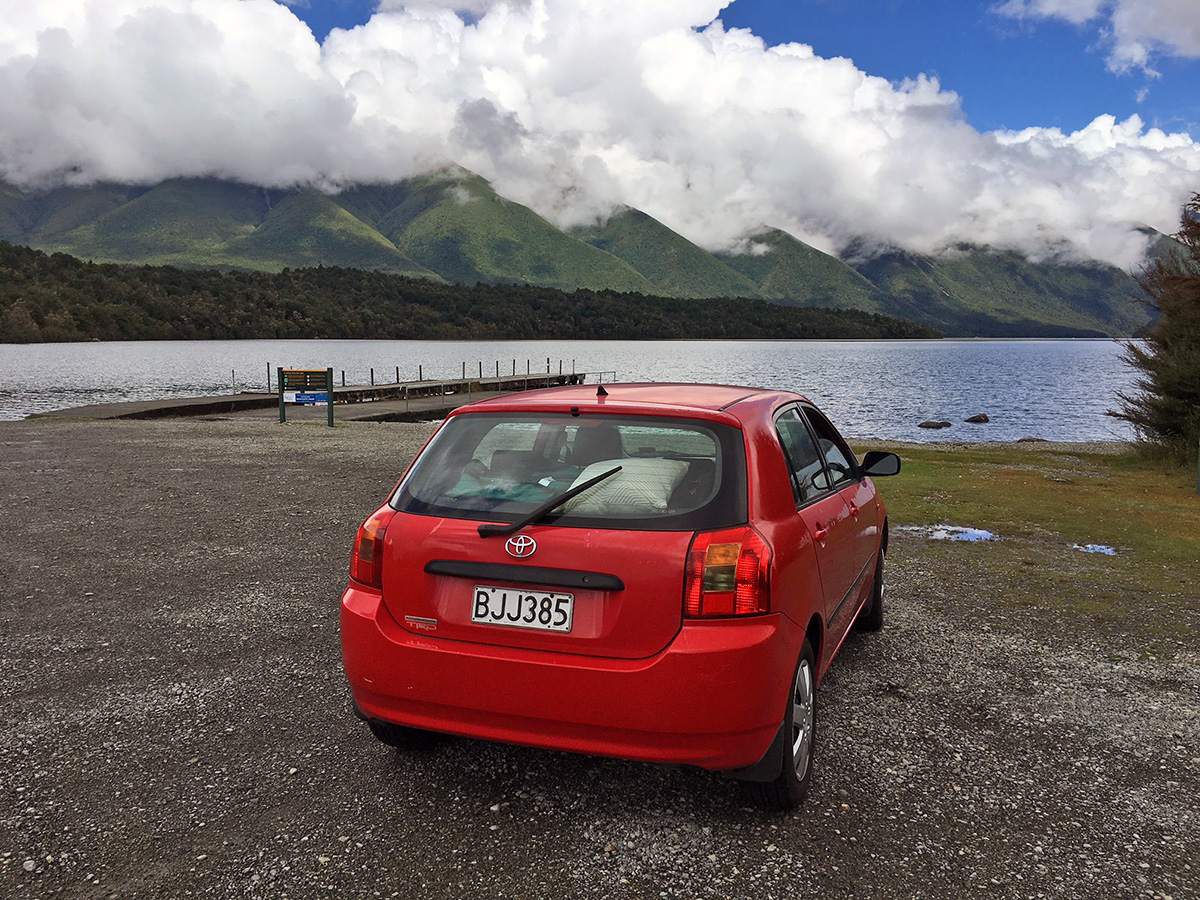 I didn’t do all that much in Nelson, just a little sleeping and blogging. Plus I slowly prepared for my first trek of this journey, the one to Angelus Hut in Nelson Lakes National Park. This park is relatively unknown with the big audience because it’s not on the regular way, yet last time I slept in the gorgeous Bushline Hut which is, as the name suggests, just above the bushline and offers stunning views on Lake Roitoiti, one of the Nelson Lakes. Back then I met a couple of trekkers who told me about their journey to the Angelus Hut, which caught my interest. I then decided that this hut would definitely be included in my next New Zealand trip. And so my first trek was the one to Angelus Hut, once again through the Bushline Hut.

The hike from the parking lot to the Bushline Hut was done in a big fat fog. At the start of my trek, there was some kind of view, but once above the bushline the weather got worse and I did not get the view I hoped for. The previous time Martijn and I had the hut to ourselves, this time I was there with a bunch of other people: a couple from France, a girl from Tasmania and a family from Seattle. In general I really enjoy spending time in mountain huts, at least those in New Zealand. It’s quite different from what I’m used to from the Alps, for example, as for New Zealand huts you will have to carry all you will need, from a stove to your sleepingbg and from food to toilet paper. As I wasn’t quite sure about the length of my trip just yet, I packed quite a bit of food, turning out to be way too much. There for my bag was super heavy and getting to Bushline Hut was quite a bit of a walk up. 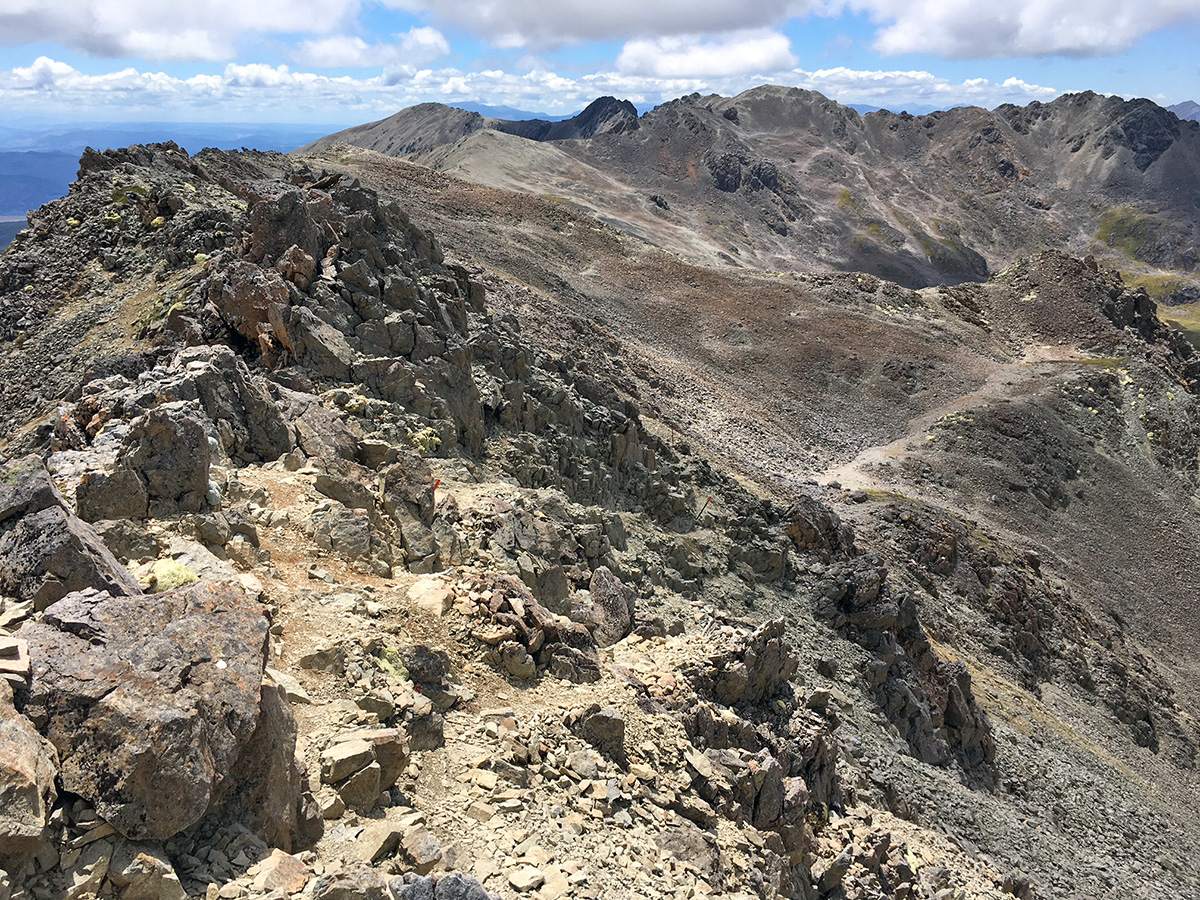 After a wonderful nights sleep, I woke up and the weather seemed to have improved, as I woke up above the clouds this time. Unfortunately, it didn’t clear before I left Bushline Hut and so I never saw Lake Rotoiti again from there. The first part of my trek to Angelus Hut was done in the mist and since the trek to this hut is not just a walk in the park, it was something I may have better not done by myself. I had to cross numerous scree slopes and boulder fields, sometimes with a neverending depth right next to me. Maneuvering here with a big pack can be quite demanding and at times I almost crawled on hands and knees. Not very cool but getting there in one piece seemed pretty essential to me.

Upon arrival it turned out to be one of New Zealand’s prettiest huts for a reason. The location of the Angelus Hut is just stunning, it’s surrounded by mountains and an immense sea of nature and silence. Unfortunately, the silence was quickly over when a large group of Israeli backpackers arrived. They totally messed things up and just ignored all the rules. Everyone got really annoyed by them and once one of them asked ‘do you know where I can charge my phone’ you know they are really out of place in those kind of huts. Unfortunately, everyone else had their share of stories with bad experiences with Israeli backpackers in groups and as far as I’m concerned, they may be banned from huts like these. They are simply not for partying until very late in the evening. Having said this, I do realize this may cause criticism but I’m quite sure that many hikers will agree with me. I’d say anyone is welcome in mountain huts, as long as you respect others. And they clearly did not do this, unfortunately. 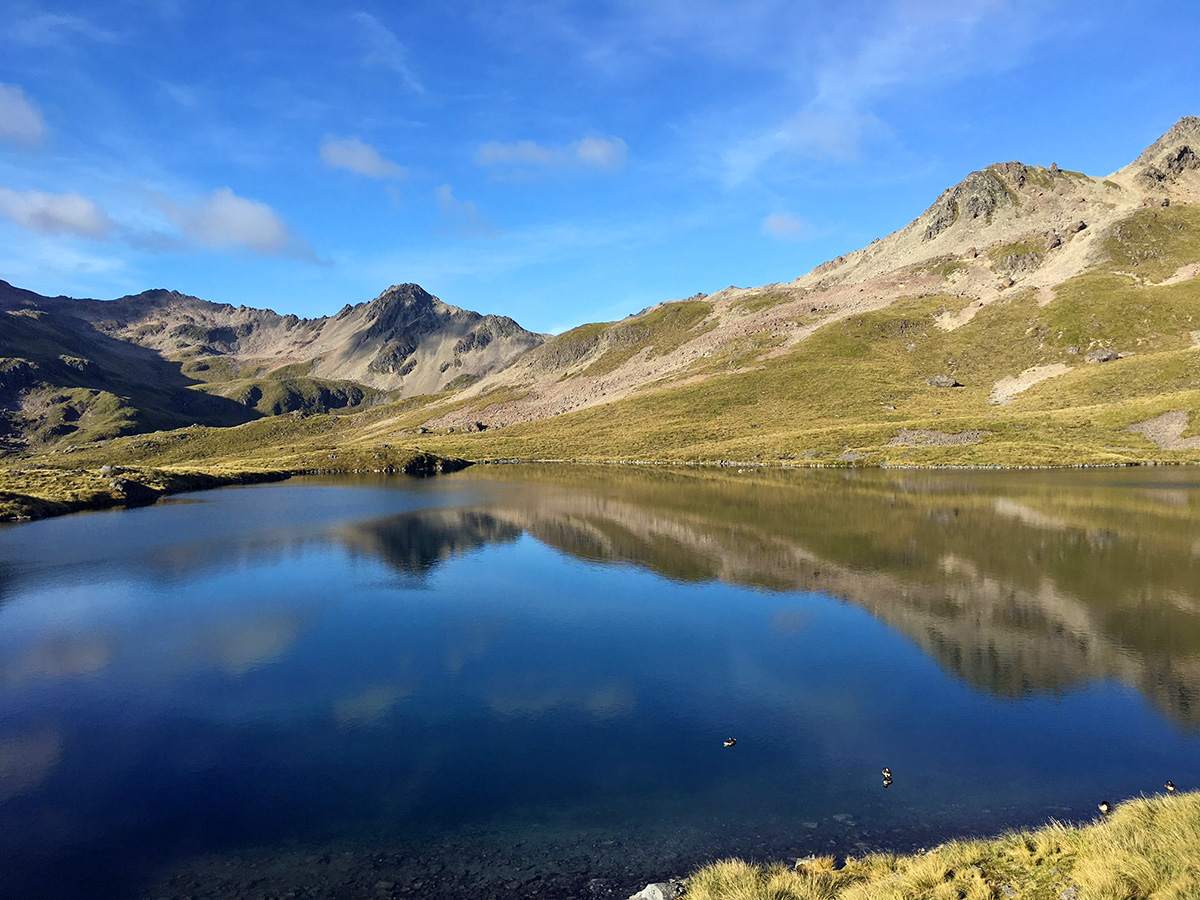 My intention was to stay in Angelus Hut for two nights, but as the weather was about to change for the worse, I decided to head out early as I didn’t want to get stuck out there. Which was a good decision because the next day the whole valley was fogged up and the way out would have been quite a challenge. Luckily I found some company as an Aucklander decided to join me on the way out. He had been hiking by himself for a week and though it would be nice to hike together, which it was indeed 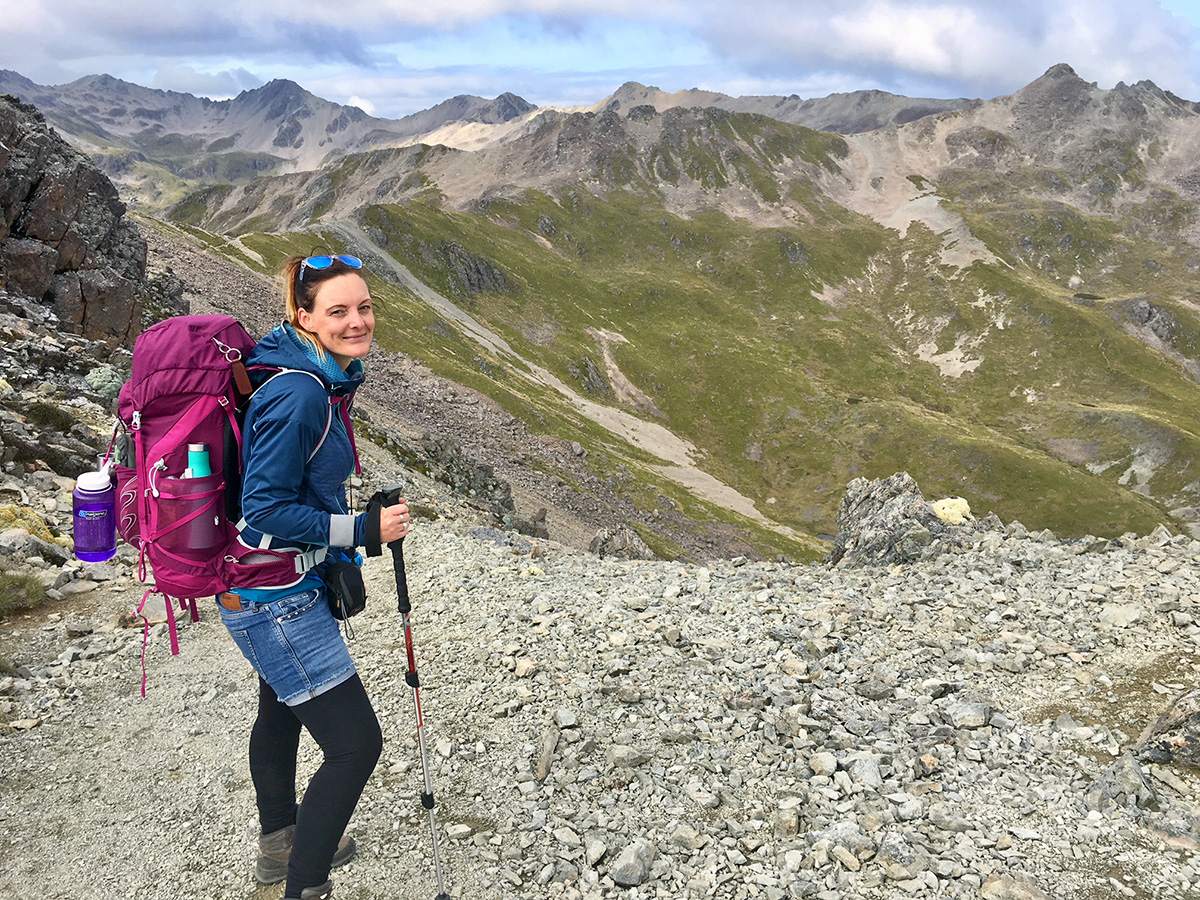 By now I’ve arrived in Mount Cook National Park (I’m a little behind on writing, sorry about that!) and in the mean while I’ve also been to Hanmer Springs and Christchurch. More about that later, see you then!