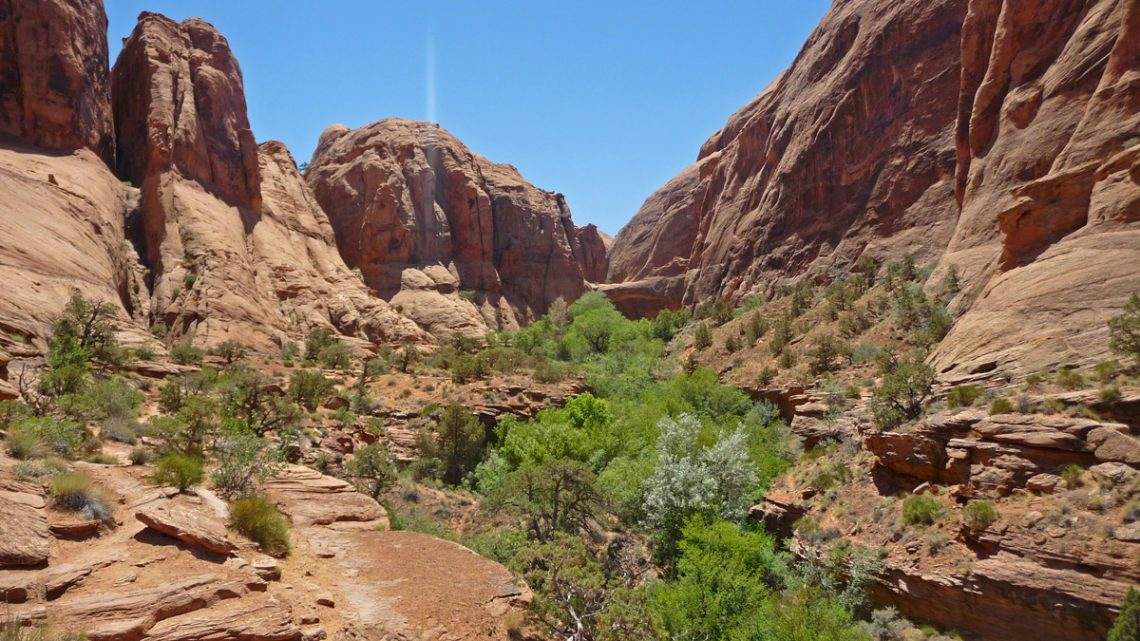 While staying in the town of Moab, Utah, most people venture out to visit the nearby national parks such as Arches and Canyonlands. However, due to a meet-up with a local guy named Allen, we were told that just outside of town, there’s a great half day hike that anyone should do, called Negro Bill Canyon Trail. The name may sound a bit odd (there has been talk about changing the name because of the word Negro) but it was named after William Grandstaff, a black prospector who grazed his cattle here during the 1800s. Allen and his dog Sidney were our companions on this track.

We were told to bring shoes that could get wet as the hike involves several stream crossings. As it was bloody warm, we decided to hike out in our Crocs (and no, this is not an advertorial for Crocs). Even though they look horrible, they turned out to be perfect for this hike as it saves you time not having to take off your boots each time you cross a stream.

The hike is 2.5 miles long one way and goes back on the same trail. Make sure to bring lots of water because you are in the sun most of the time, esp. when you decide, like us, to hike right in the middle of the day. Also make sure to be careful because there’s a lot of poison ivy along the way. Immediately if you step on to the trail, you are surrounded by big walls. The trail takes you along a small river, sometimes up and sometimes down. Most of the time the trail is sandy but every now and then, you step onto the famous slick rock, which surrounds all of Moab.

Out on the trail

Even though there were plenty of other people out on the trail, it was windy enough to always give us the feeling we were out there alone, just surrounded by big walls and cactuses. And even though you may not expect it, plenty of green, too. Click here to see a short video we made from walking between the big walls.

You will be crossing the stream various times and bringing our Crocs was just perfect because it meant we didn’t have to take off our shoes. And walking through the water was a very welcome way to cool down a bit (note to self: next time, start early or late and don’t hike at the warmest hours of the day).

Along the way, lots of wild flowers and cactuses surrounded us. We met plenty of other hikers and eventually, after about 2 hours we reached the end of the canyon and the main sight of this hike: the Morning Glory Natural Bridge. This bridge has a span of almost 75 meters, making it the 6th longest natural bridge in the United States. Here, the trail comes to an end and it’s a perfect spot for a rest and for some water. People were rappelling from here (so cool) and we got to cool down in the shadow, watching kids play in the small pool of water that was formed by the water seeping from the rocks.

After a short rest (and I admit, a short nap, too) it was time to make our way back to the car. We actually decided to follow the stream for a large portion of the track, just to cool down. Hiking the Negro Bill Canyon Trail was a great and (for us) relaxing way to spend our afternoon in one of the most unique towns we have ever been to. We can’t wait to go back to Moab one day and explore more of the amazing sights that this place has to offer.

If you are headed for Moab and are looking for a short hike, this is a great option. Enjoy your hike!