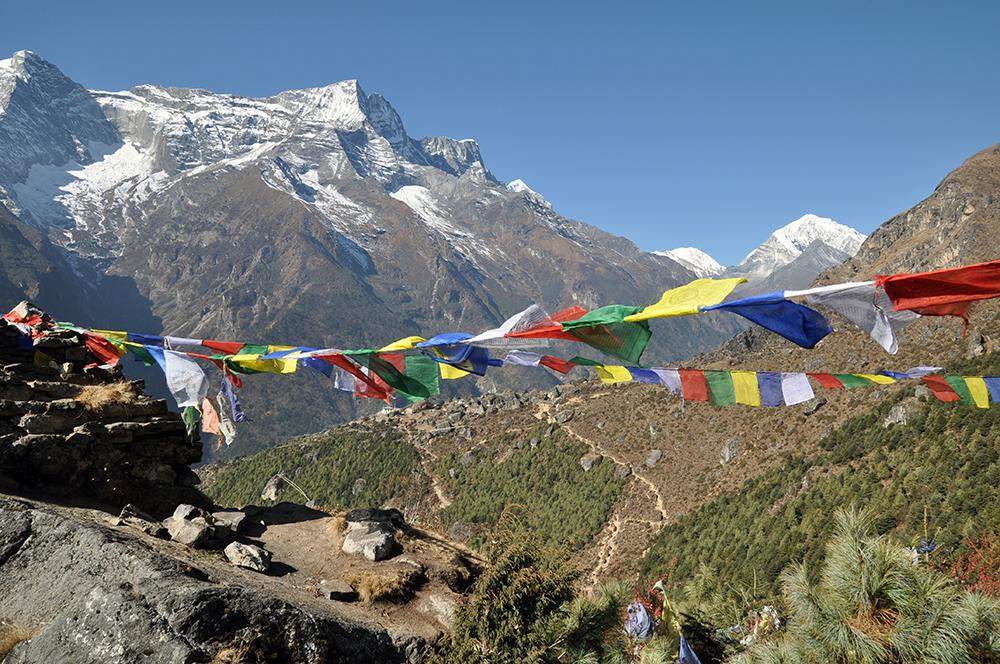 In the previous edition of The Trail to Everest Base Camp, I told you how I struggled to get to Namche Bazaar and how the headache kicked in the night of our arrival at 3.440 meters. On day 3, the plan is to take it easy and do an acclimatization hike up to the Everest View Hotel. This is an exclusive hotel, built on a ridge above town, where you can get a great view on Mount Everest, better than the short peek we had yesterday.

Since we won’t have to hike too far today, we decide we’re just going to take one backpack, which Martijn will carry, so going up will be easier for me. I think it’s a great idea but at the same time I feel it’s a battle I’m already losing. Me against the altitude. I wake up with just a minor headache and drink a lot of tea and water to keep my body well hydrated. Earlier that morning when I woke up, I opened the curtains of the hotel we stayed at and I saw that Namche Bazaar is actually surrounded by snowcapped peaks. It looks like it’s going to be a beautiful day so I’m confident it will be super! The hotel is ‘only’ 400 meters higher than Namche so that means about a one hour climb. Could be worse… 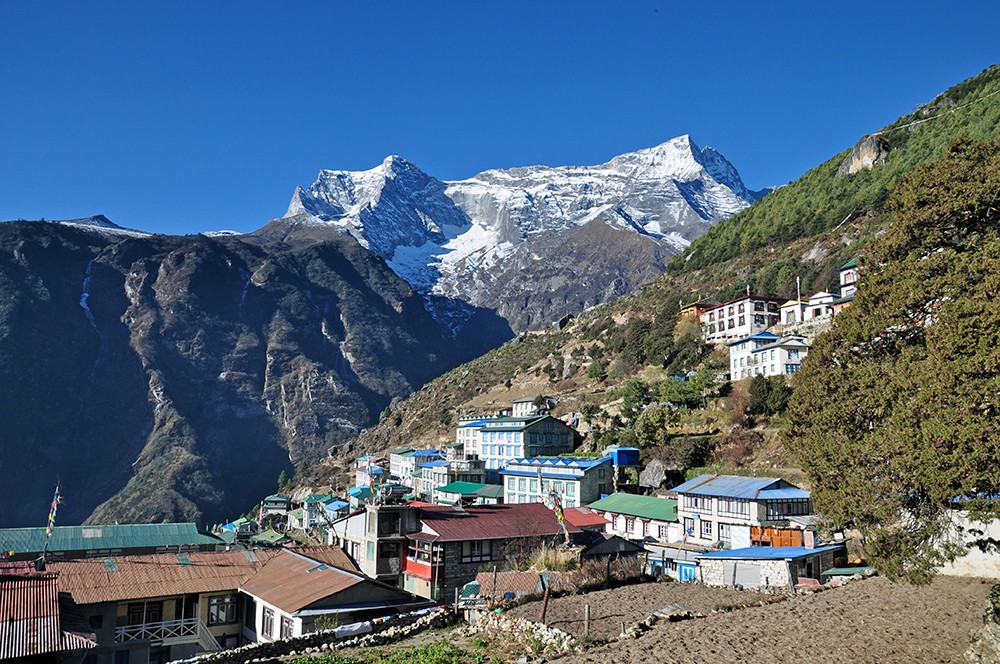 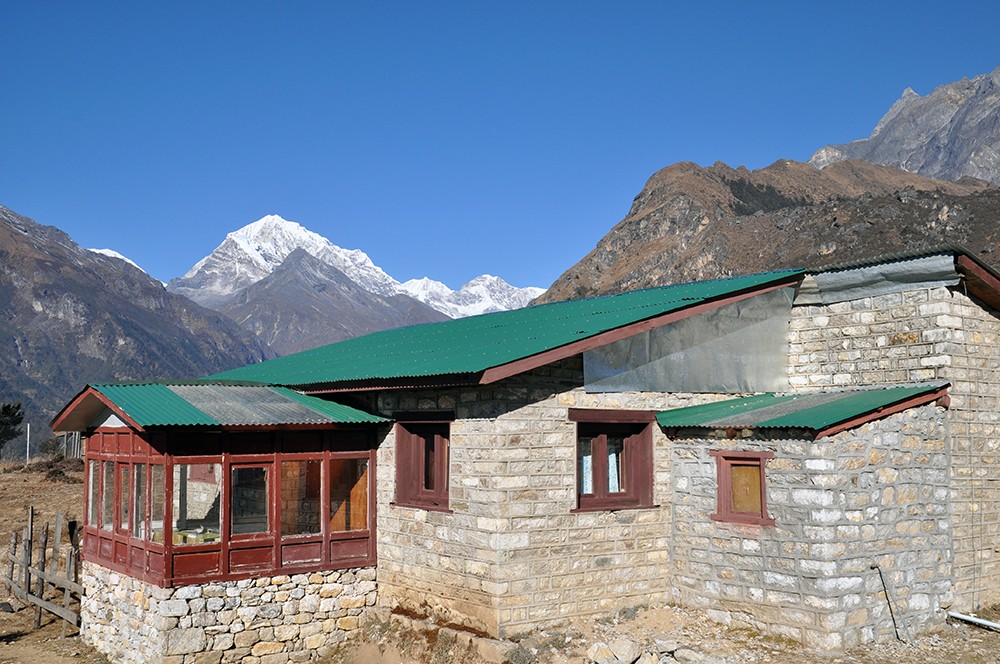 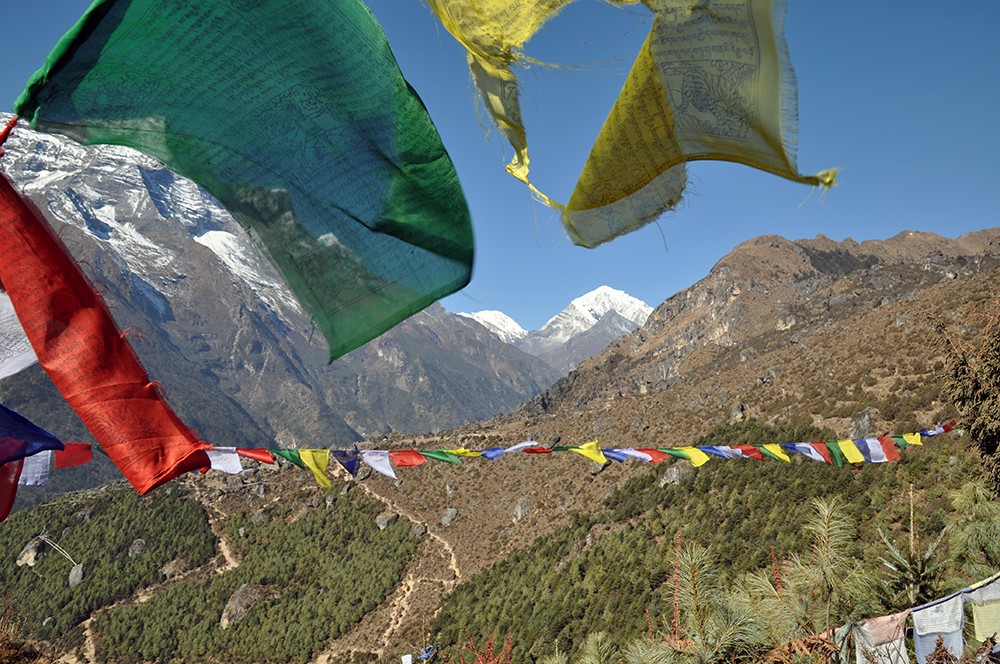 We leave town while hiking some of the steep stairs and immediately I’m out of breath again. What’s going on with me? As basically everyone does the same hike on their free day in Namche Bazaar, we see many small groups above and around us. The fact that I don’t seem to be the only one that struggles with their breath, makes me feel confident. Soon, we’ve risen above town and we have great views of the mountains surrounding the village. A bit further along the way is the official Mount Everest View Point. Once we get there, I turn around and there she is: MOUNT EVEREST! She’s next to Lhotse and at first I don’t realize it’s Everest, until our guide Jangbu tells me the difference between the both of them, as they look equally high from this distance. The sky is clear of clouds and I can’t help but feel extremely happy. In case I’m not going to make it to Everest Base Camp, I can at least say I’ve seen the mountain! If you see the pics below, you will see two almost identical peaks: the right one is Lhotse and the left one, slightly further away, is Everest. 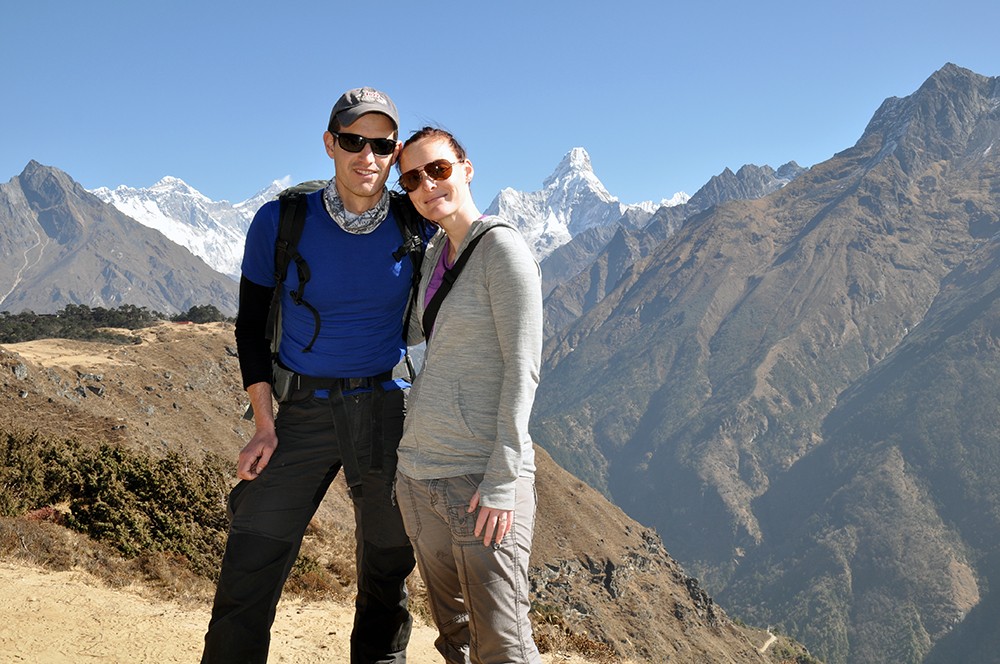 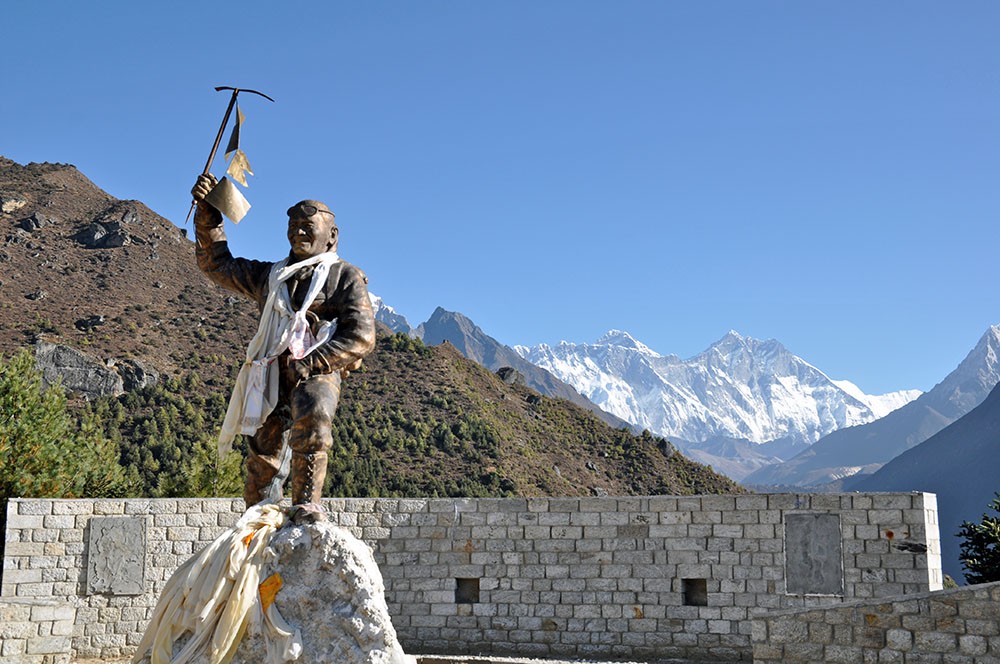 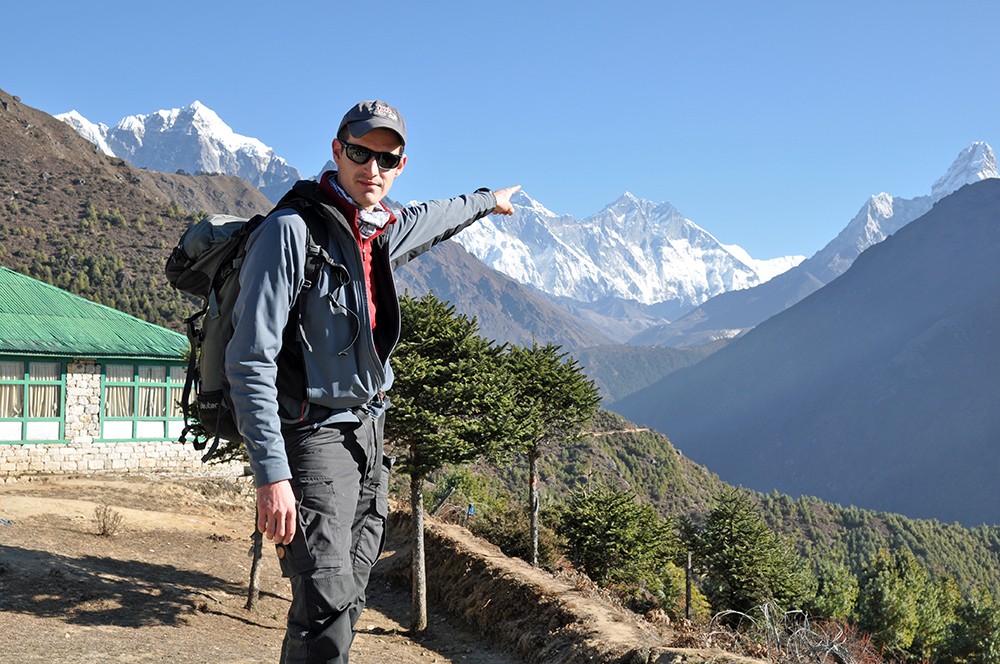 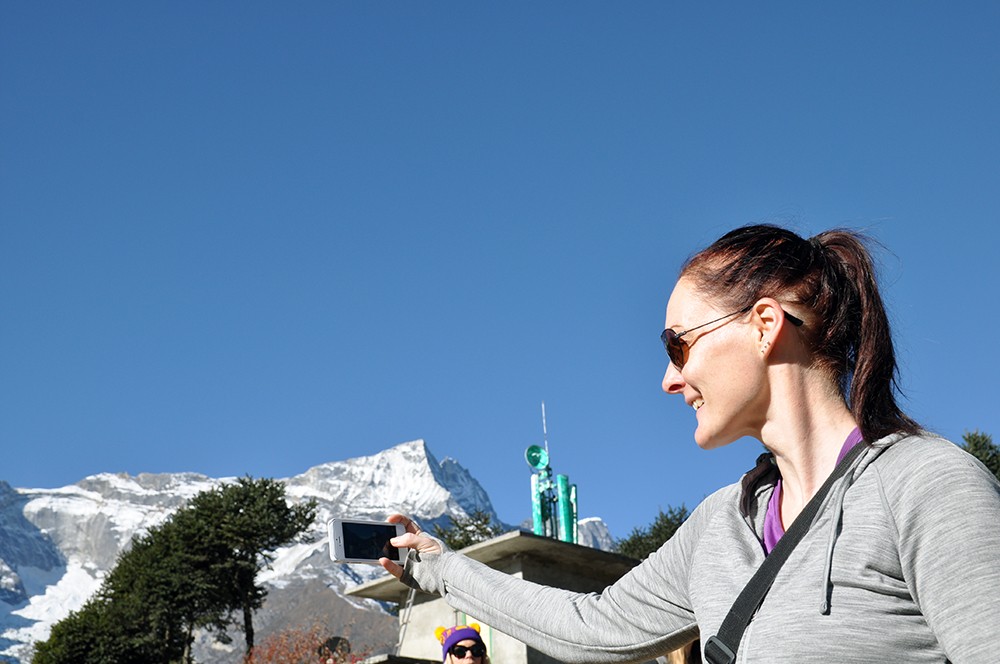 At the same place there is a small museum but I can’t be bothered looking around much there. Somehow, Mount Everest makes me want to look at her continuously. Another sight here is the statue of Tenzing Norquay, who climbed Everest first together with Sir Edmund Hillary. We take a ton of pictures and then decide it’s time to move on and head up to Everest View Hotel, for an even better view.

I see a chain of people hike up the steep face of the mountain that rises above Namche Bazaar. I ask Jangbu and what I’ve feared is about to happen: it’s the same trail we will have to take. It’s steep. And high. But hey, I can do this, right? Martijn attaches a bottle of water to the camerabag that I’m carrying so I can get a sip of water occasionally. I force myself to do 15 steps and then take a short rest to regain my breath. This works well and I even manage to actually enjoy myself while going up. ‘Slowly, slowly’ as always…

After about half an hour we reach a ledge and I thought that would be the end of the hike and the Everest View Hotel would be there. Unfortunately, the hotel is not even within sight yet but the terrain flattens out, making it an easier hike up. I fiercely put my hiking poles on the ground with each step I make and steadily walk up. As soon as the Everest View Hotel comes into sight, I know today will be alright. 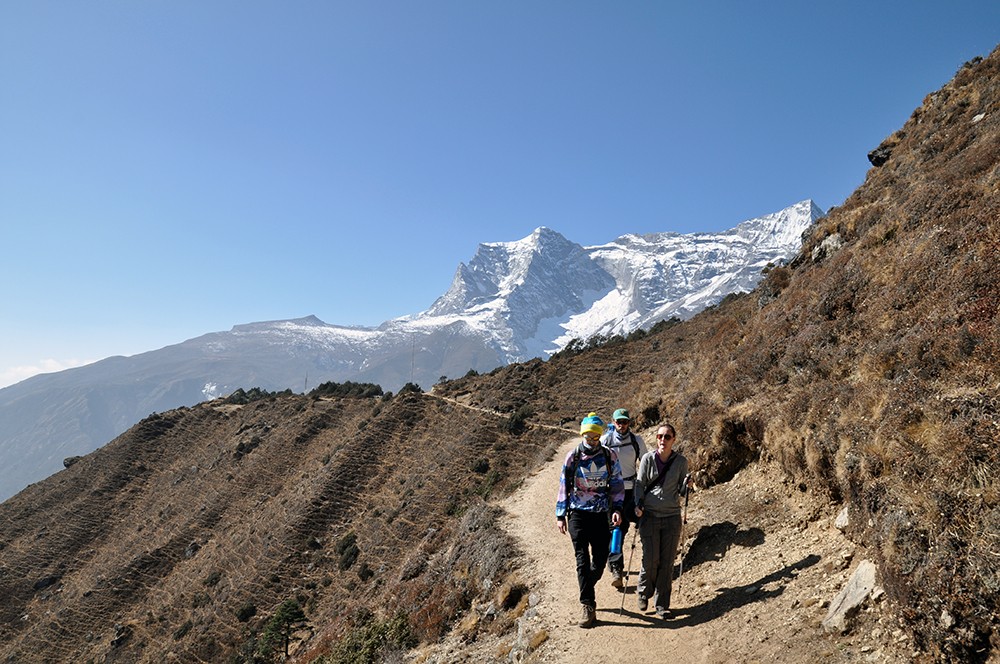 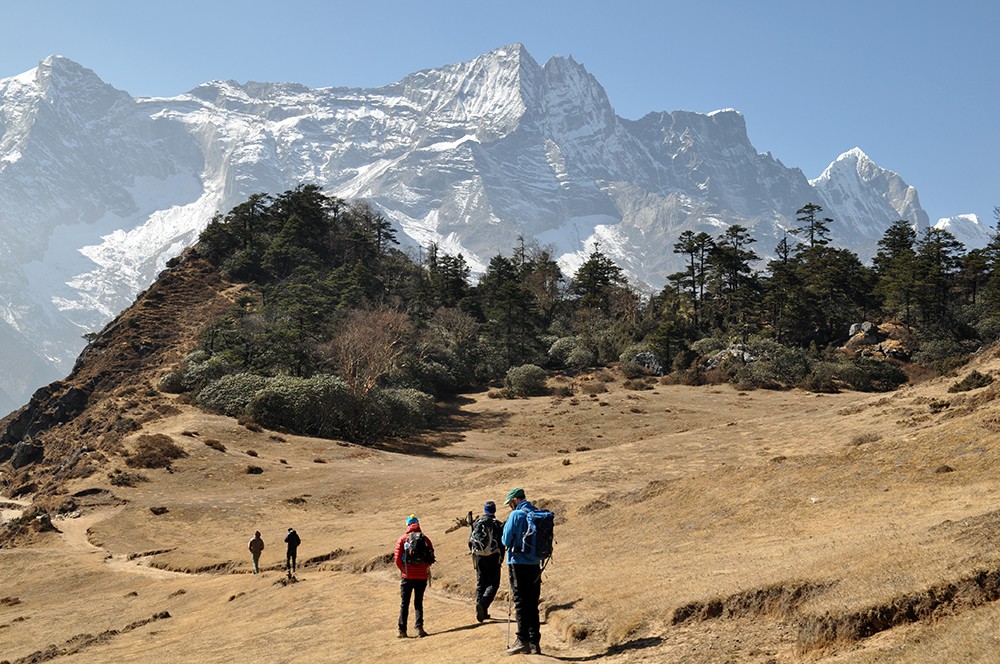 Upon reaching the hotel, we are told we can access the rooftop terrace up until a certain point. I think it’s pretty cool that a luxury hotel opens up a part of the terrace for hikers who can’t afford to stay there. While entering the terrace, I notice there are a lot of people there already (those I saw crawling up the mountain earlier) and everyone is gazing at the snowcapped peaks in the distance with awe. Mount Everest just got a little bit closer! The sun is shining and we find a table. We sit together with 3 English guys we shared the helicopter with and we grab some tea and snacks. They order fries and although I don’t feel like eating them, I still grab one to take a picture of me eating fries in front of Everest. I realize that this is how far people can get without hiking. Fancy people are being flown in here by helicopter, but if you want to get closer to Mount Everest, you will have to walk… Another beautiful mountain coming into view here is Ama Dablam, which makes an equally big impression on me! 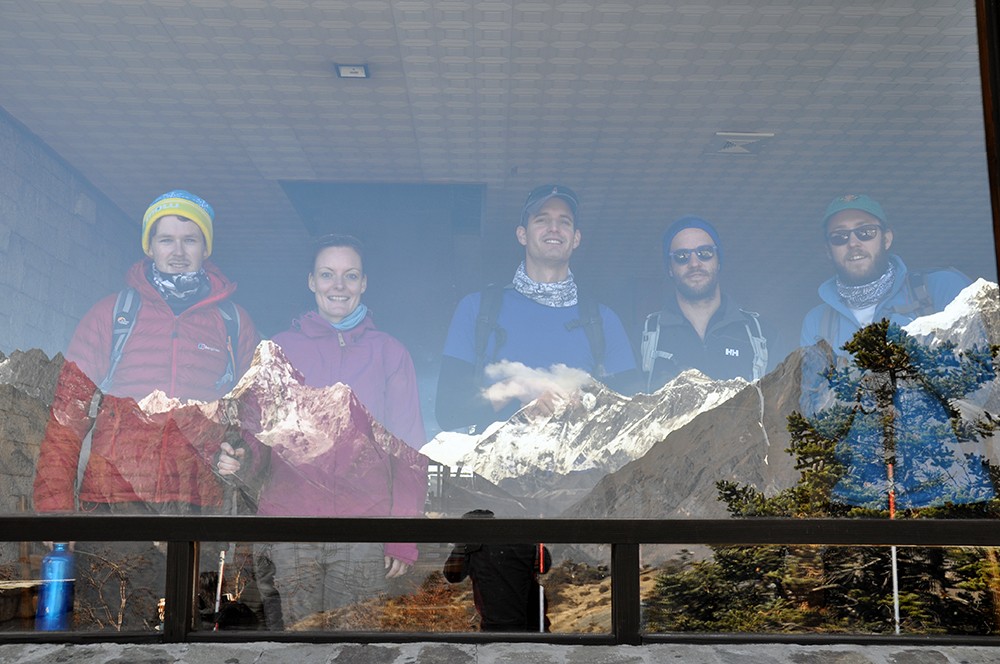 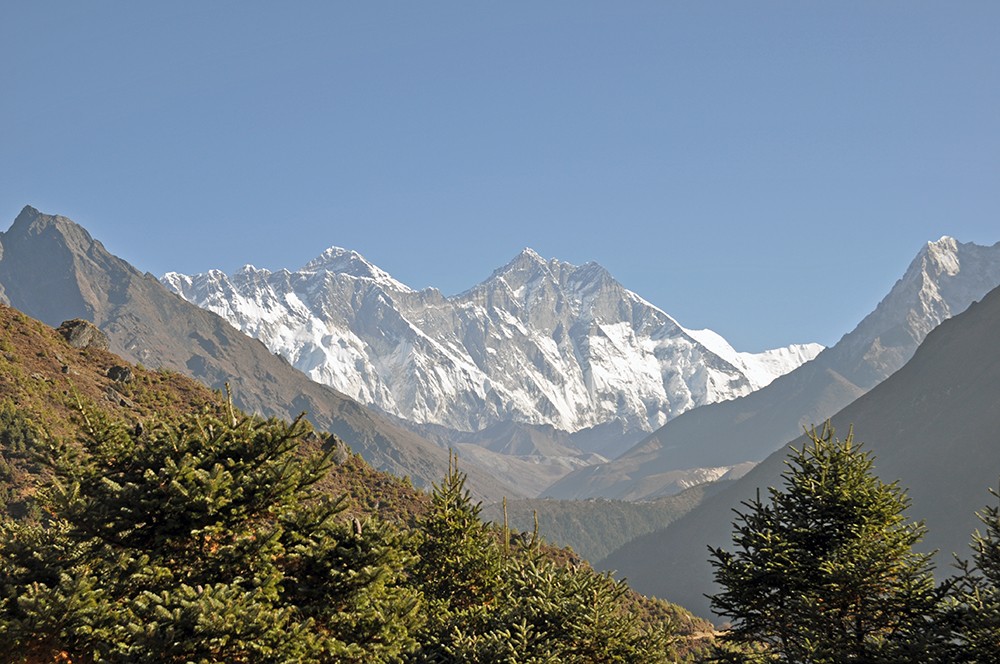 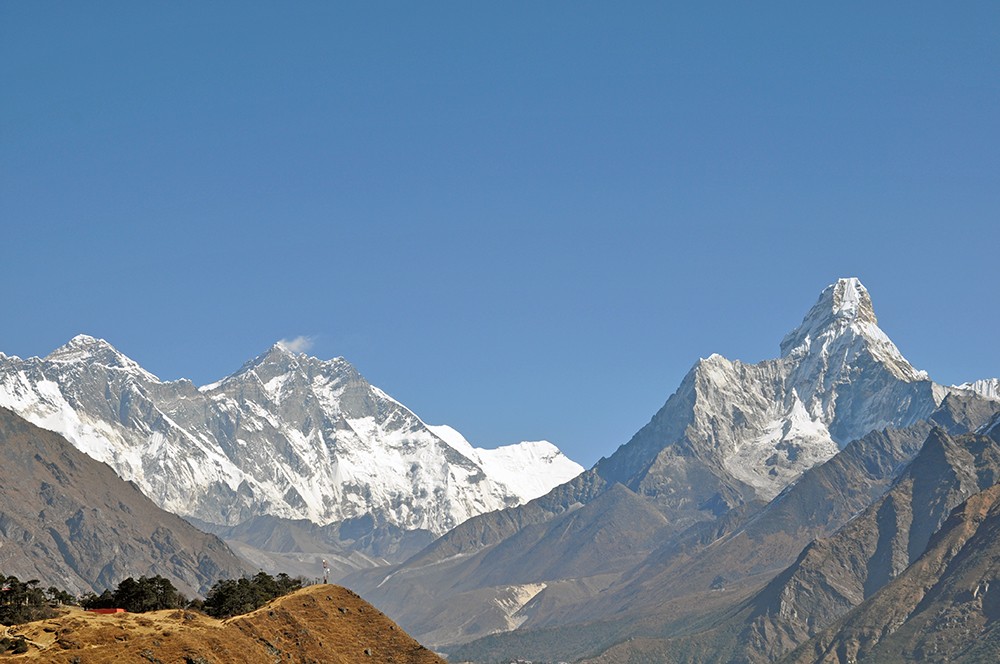 We find a wifi signal and I start uploading some pics to Instagram and Facebook. Although I promised myself a digital detox, this moment was too good not to share. After about an hour, it’s time to hike down. We take another route which takes us along the local airfield and through some local communities. At around lunchtime, we are back in the guesthouse. After lunch we decide to head into town, we heard there are some great western bakeries and we want to have a peek at the stuff they sell here. We buy some extra water purification pills and eventually settle down in the Namche Bakery for a while. It’s swarmed with other tourists and we grab a cake and some tea. Hydration is happiness, after all! 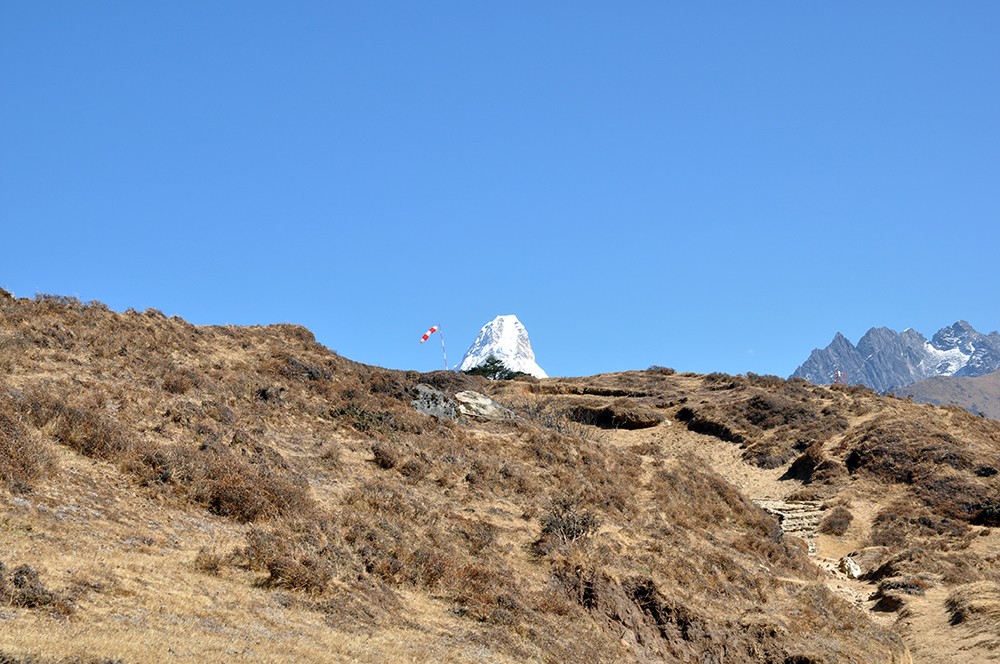 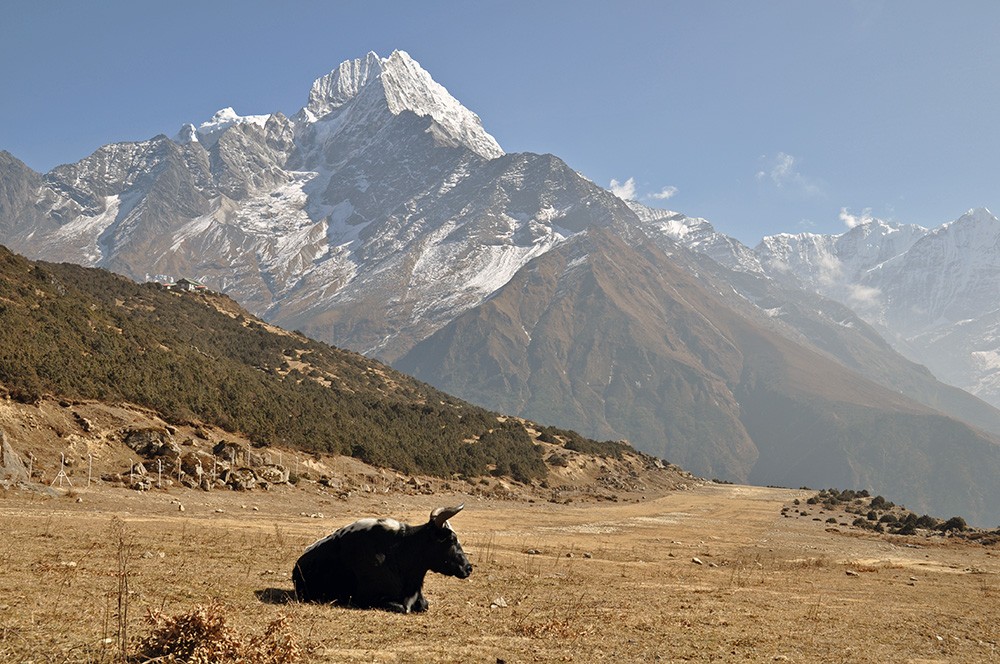 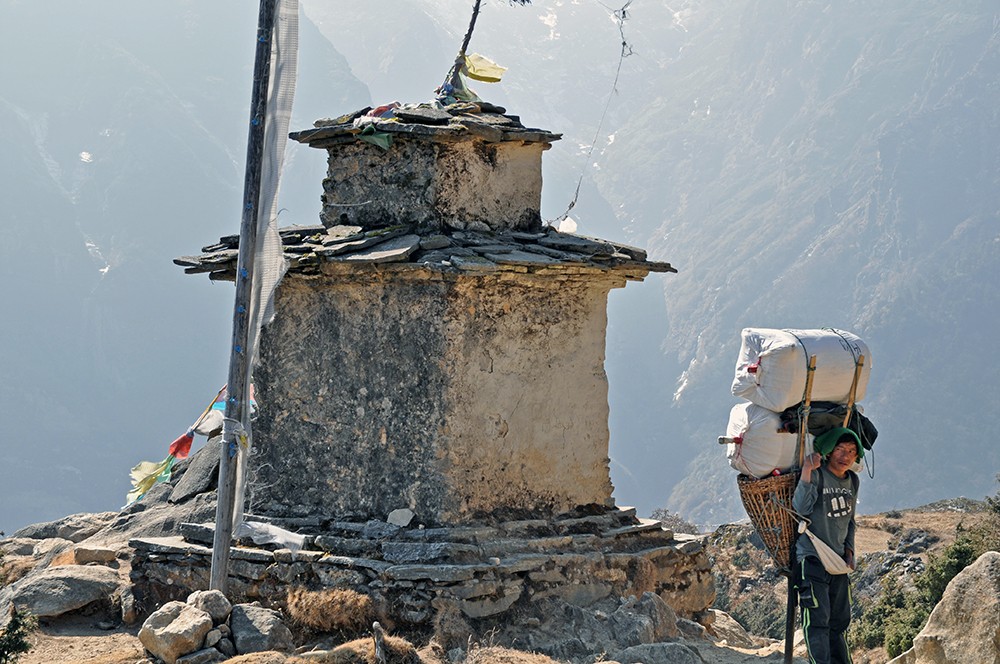 That night my headache is back. Jangbu tells me that if I want to start taking Diamox, tomorrow will be the morning. This medication will help you reduce the chance of altitude sickness however it will not prevent you from getting it. Also, if I start taking it, I will have to continue taking it until we’re back in Namche Bazaar, back at the same altitude. He also warns me that Diamox is to prevent and won’t cure, so in case I get sick over the next days, it’ll be too late. Although I’m not a fan of taking meds, I feel like I should take them. My doctor prescribed me to them before leaving (one week before departure to EBC I had a really bad bronchitis and I took both antibiotics and prednison to get better in time) so I decide I should not be stubborn. Martijn is in doubt and since my prescription isn’t enough for two, he’s unsure of what to do. Jangbu tells him he has enough in his medical kit for Martijn, so it’s decided that he will start taking it, too. At least that way, we are in this together and have done everything to prevent ourselves from getting altitude sickness. What is about to come, is something I would never have guessed…

Next week: day 4 of the trek to Everest Base Camp, from Namche Bazaar on to Mong La, our firs steps above 4.000 meter! Go here to read the previous days of the trek.

Want to read more stories about Nepal? You may like these blogs as well:
– Nepal: a head filled with emotions
– Everest Base Camp Trek: the movie!
– Our favorite places to eat in Kathmandu