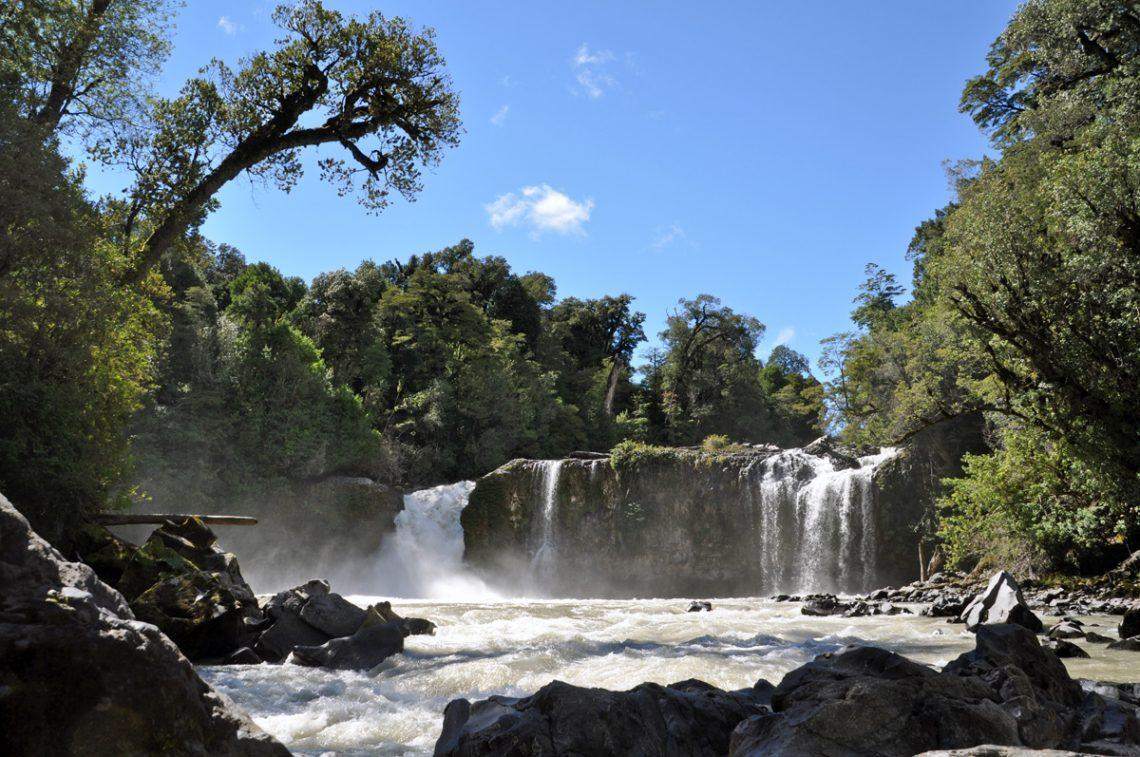 After returning to our car soaking wet from Cochamó, we’d pretty much had enough of the rain. More than enough. But as the weather is not something you can change, we just had to deal with it and make the best of it. After a couple of short stops at the bottom of Osorno volcano for some short walks and getting an empanada for lunch in Ensanada (I never had so much emapanadas in my life before as during this trip) it was time to continue our journey up north and hopefully leave the rain behind. We drove along the shores of Lago Llanquihue (which I can only remember as Yankee-Way, which I was told by the people from the hotel we stayed at the night before) and further north to a town called Entre Lagos, which we figured would be within reach after Cochamó, before crossing the border into Argentina.

Well what can I say, Entre Lagos is not the really best place to stay. If you are looking for a place to stay close to Puyehue National Park that is not too expensive, just do it, but this was one of the most depressing towns I’ve ever been to. It might have been the rain that kept on pouring or the fact that it was insanely busy everywhere and driving through town was hell, but we were happy to leave and find a cabin just outside town for the night. As it was still raining, yes the story doesn’t change, we just hid in our cabin and caught up blogging and posting pictures on Facebook for our friends back home.

And then the next morning … the sun was shining! I just scrolled back on my Facebook pictures and found one picture I posted the night it was still raining and one the next morning just saying “SUNSHINE!” 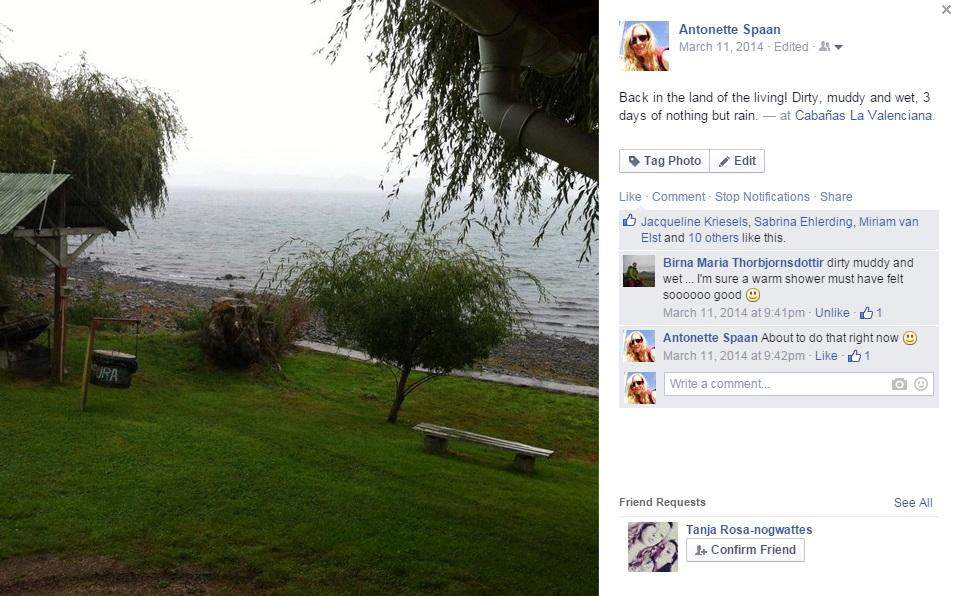 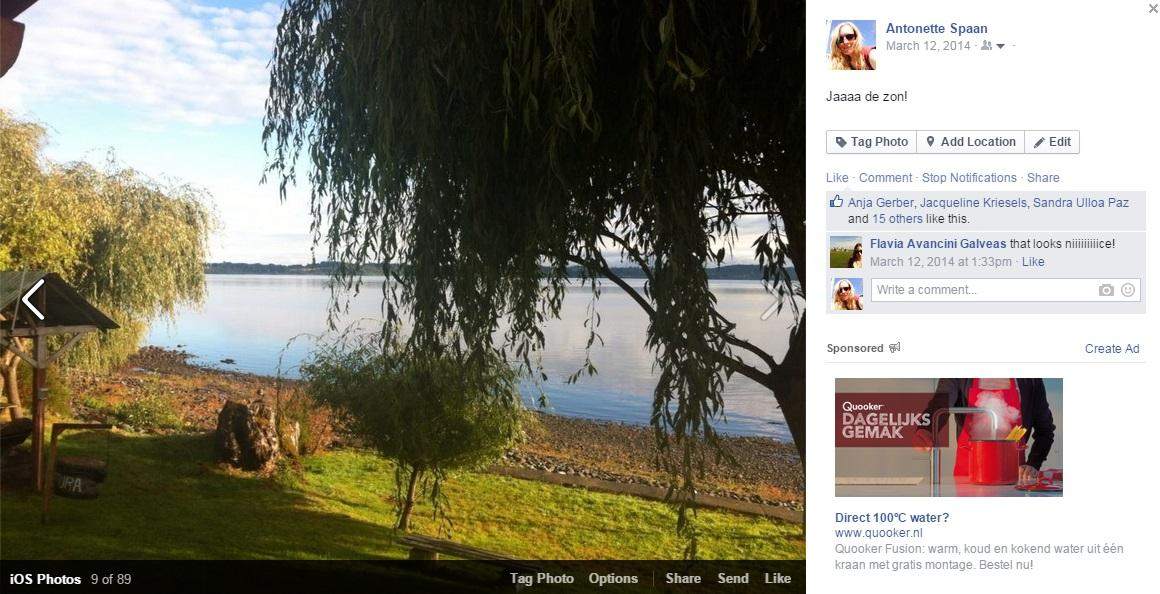 After breakfast we packed our stuff as we wanted to be in Puyehue National Park pretty early. We didn’t really know what we were going to do there since Lonely Planet doesn’t really write much about it but we figured it would be nice to take a plunge into the hot springs they have.

While we were driving (or well, Martijn was driving, I was still waking up, sort of) and were happy that the sun was shining, I looked in the mirror and suddenly saw something in the distance that caught my attention. I always have to be careful when turning around while sitting in a car because I have extreme motion sickness, but then realized that at last, Osorno volcano was out of the clouds. “Stop the car, I need to take a picture!” I said and Martijn was like “I can’t just stop here, there’s traffic all around us” … and then me again. “I know, but can you just stop. I NEED THIS PICTURE!”  … so eventually we found a place where it was safe to stop and we took the picture… me and my stupid obsession with volcanoes. And taking pictures. 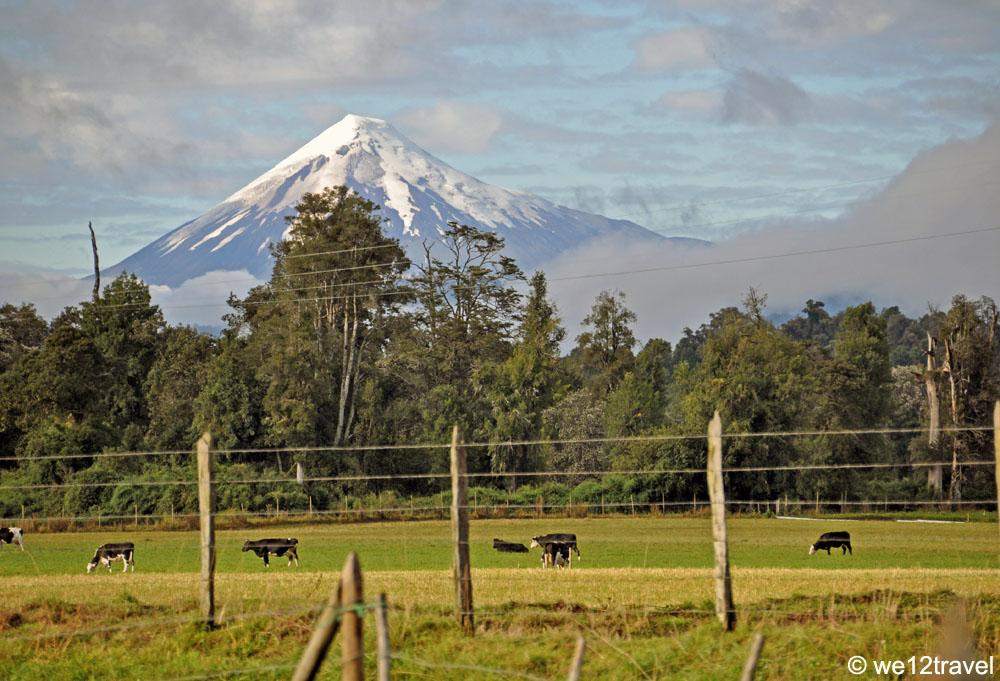 Next up, we entered Puyehue National Park. A few months earlier we had been to a lecture from a guy who had been on a 5 day trek here in he showed us incredible photos (which pretty much reminded us of Iceland) of this park. At first we wanted to make this trek but later on realized we’d better be hiking in other places because we had no clue what the trail would be like after the massive 2011 eruption of the Puyehue – Cordon Caulle (read more about this on Wikipedia, very interresting, trust me!).  Anyway, we were really looking forward to exploring this park for a couple of hours before moving on to Argentina and leaving Chile behind for a while.

As it turned out when we arrived in the park, the hot springs were still closed so instead we decided to go for a hike. We picked up a hiking map from the visitors centre in Aguas Calientes and attempted to ask the guys working there what the best hike would be, but with my basic Spanish and their non-existent English, it didn’t really work. So instead, we just chose a hike that sounded nice to us and was also mentioned in Lonely Planet: the Sendero El Pionero. Although it said it would be steep, we figured we’d be fine in our jeans and sneakers, only to find out that the trail was extremely muddy and slippery, because of (you’ve already guessed it!) the rain. Walking up took up about 40 minutes and upon arrival at the mirador, we expected quite something but instead we saw this: 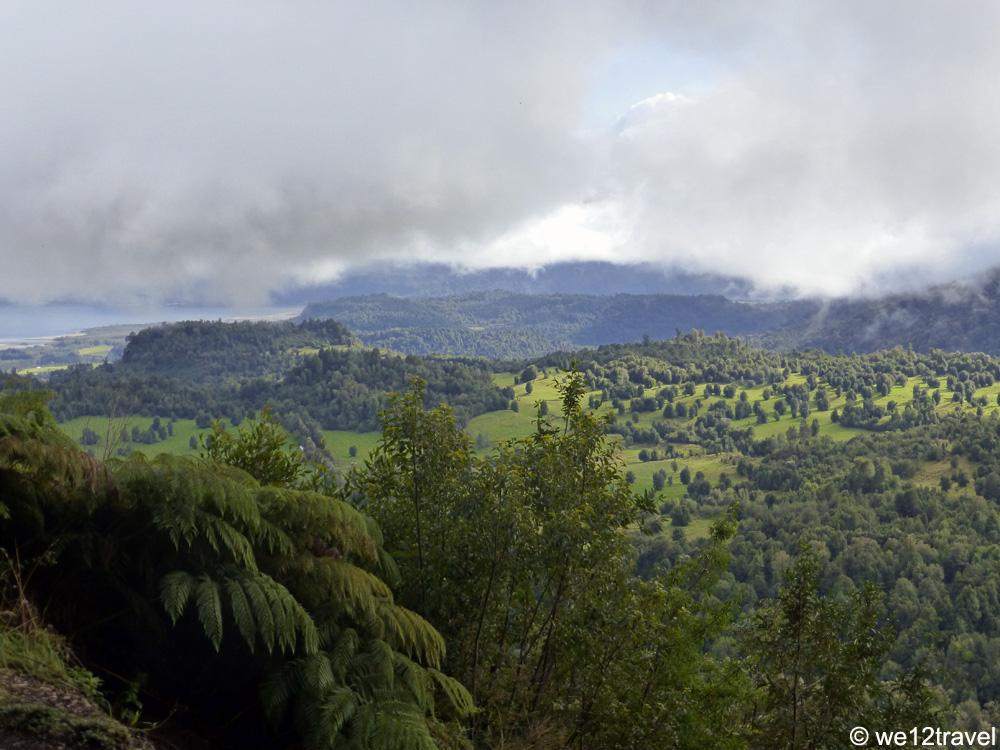 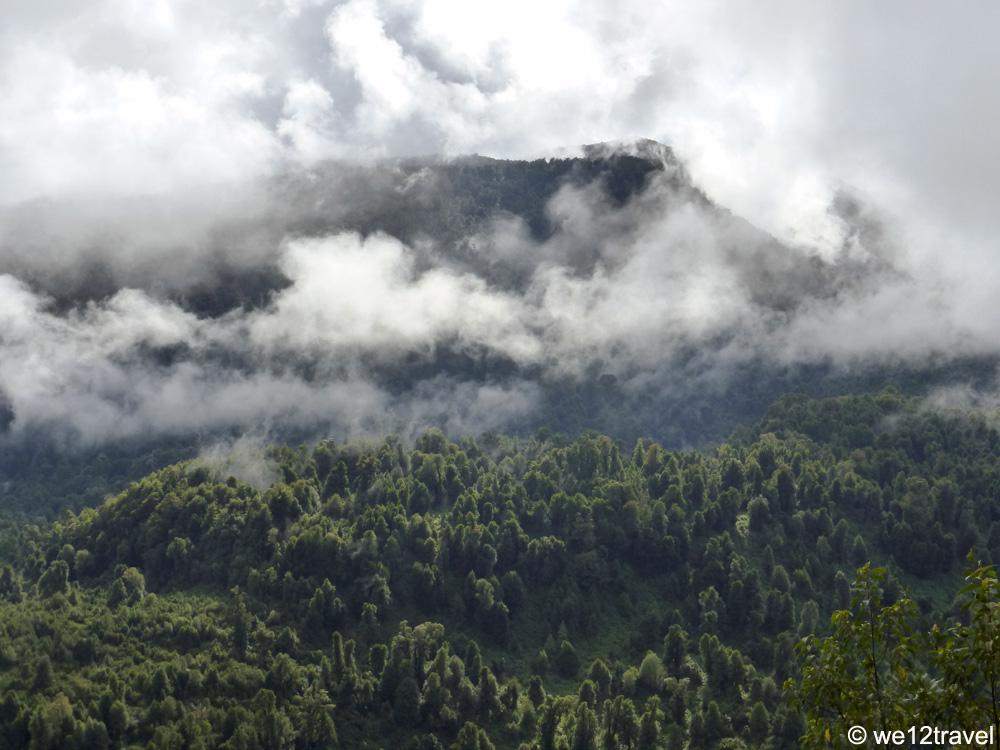 Trees and clouds! We hoped for some views on Volcan Puyehue but again the angels were not on our side. However, it was a good excersize after the cakes we had for breakfast and within an hour we were back at the car. After taking a look at the hot springs, we decided not to go in because in all honesty, they didn’t look too appealing and it was pretty crowded, even in the early morning.

So on we went, this time to the Anticura section of the park, where we heard there would be a nice waterfall (that much I understood from my “conversation” with the warden). We had to pay a couple of Pesos to park the car and started walking to a waterfall called Salto del Indio, a 20 minute walk through a very green forest. We didn’t really know what to expect but we totally surprised about the waterfall. Here’s why: 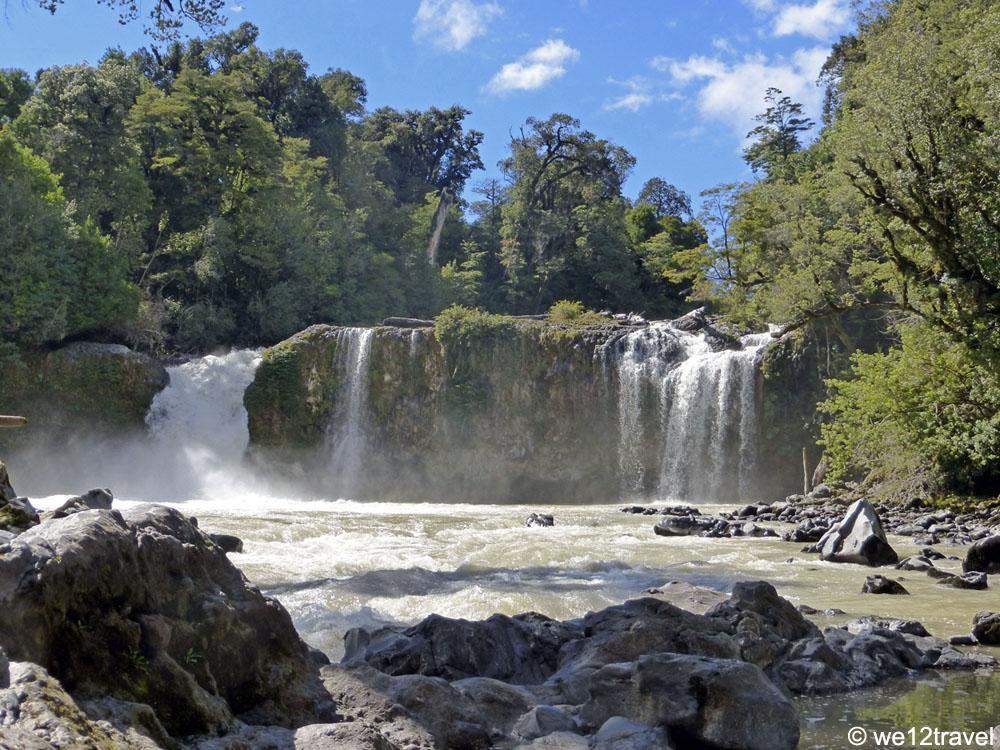 And the good thing was: it was just us, so we basically had all the time in the world to take pictures and hang around. This totally unexpected little piece of paradise totally made our day.

After this hike, we needed to move on to make it to Bariloche in time. A real shame because we’d have loved to explore a bit more. The drive further up through the park was pretty stunning and eventually, the clouds cleared up and showed us a bit of the volcano. What stayed with me mostly however, were the big layers of ash and pumice that still covered big parts of the landscape. 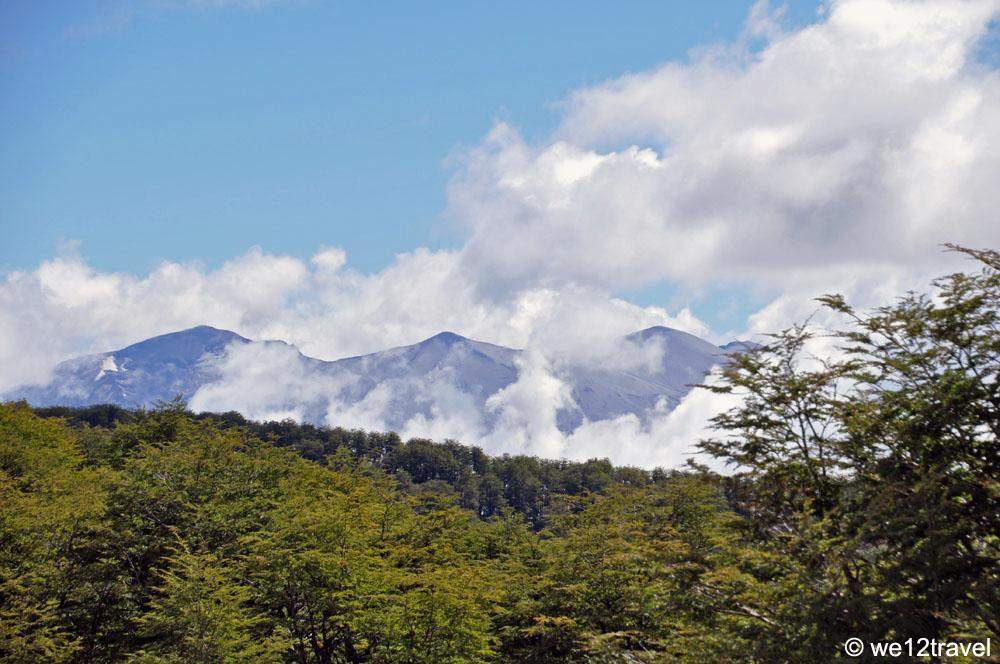 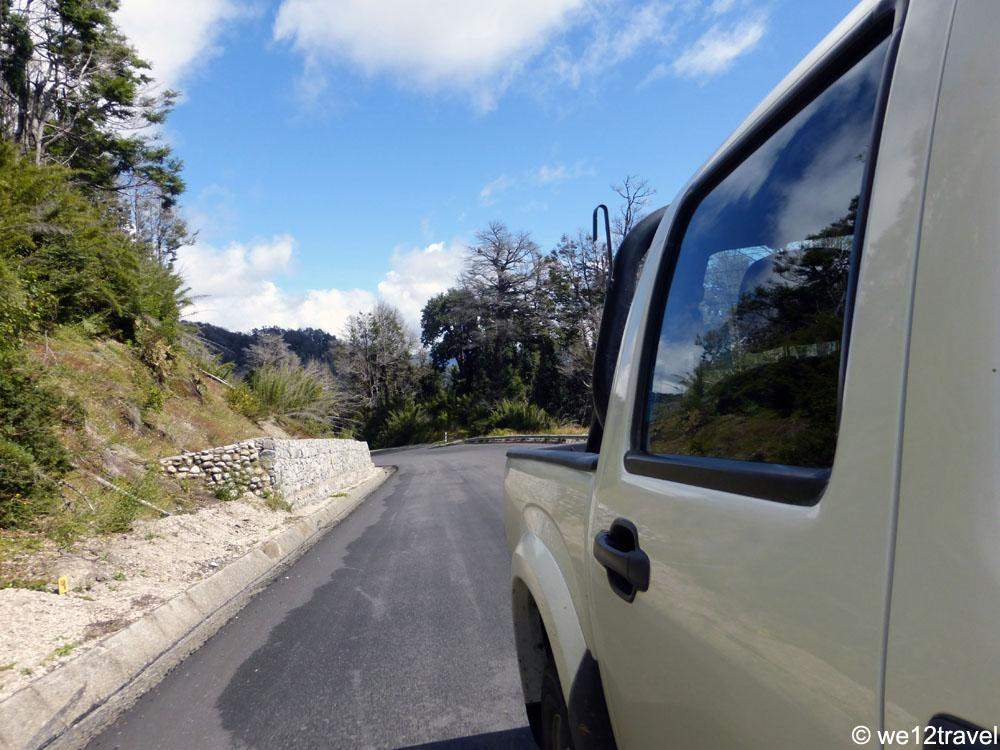 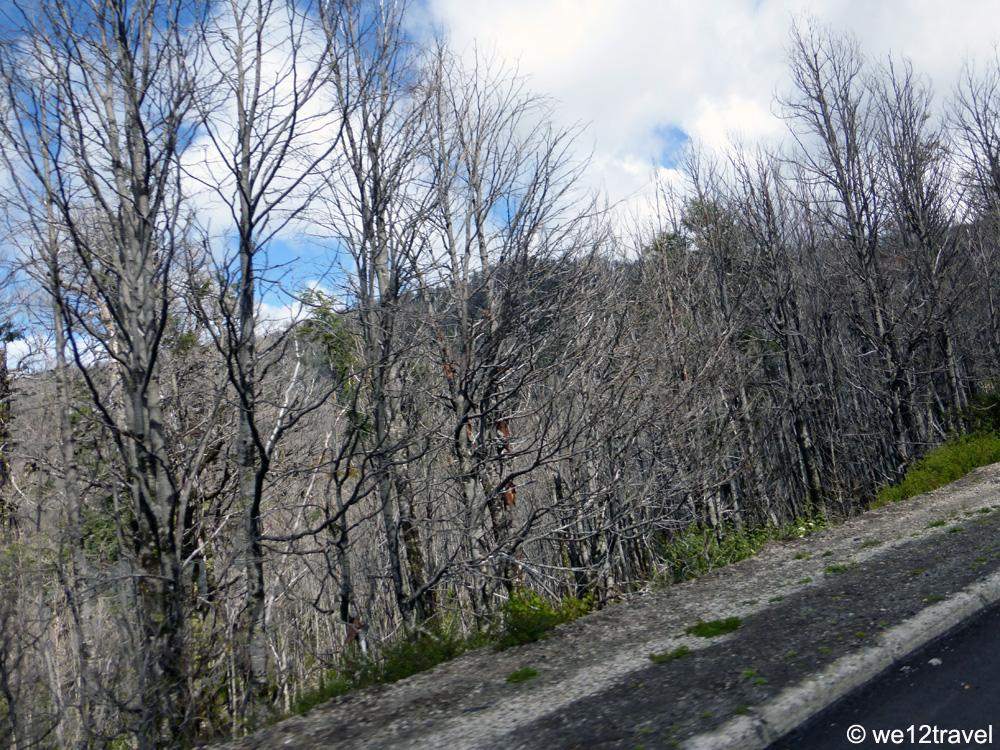 Even tough many people would consider this unattractive or ugly, I somehow found it really interresting. Over the past couple of years, when traveling I’ve learned to see the beauty of everything in its own way, even if it may not be something beautiful at first. This is just a part of nature …

And from here, our journey continues to Argentina … but that’s for another time. 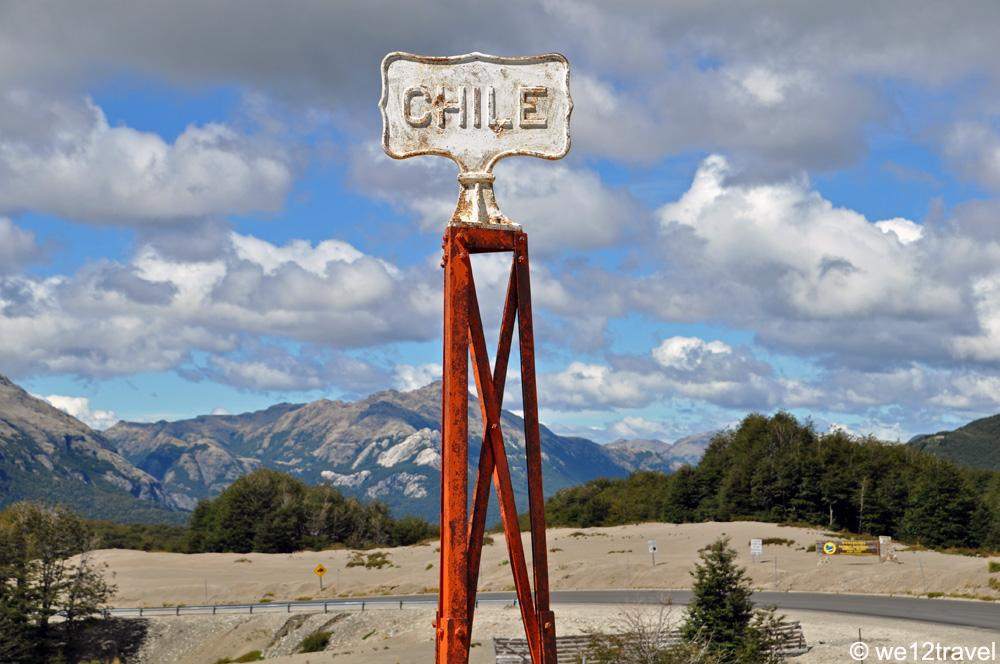 Things to consider when visiting Puyehue National Park:
– Google Maps won’t show the road through the park as a route to Bariloche in Argentina, however, the road is in very good condition and the drive is stunning. Plus it´s much shorter than the Google alternative, which is via Pucon and San Martin de los Andes.
– Take cash as you have to pay some small entrance fees at various places and they won’t accept plastic.
– If you visit the Anticura section of the park, make sure to stop by their exhibition about the 2011 eruption. VERY IMPRESSIVE!
– If you want to cross border into Argentina, you need to have the right papers for this and arrange this when renting a car.
– The Cardonal Antonio Samoré Pass that will get you across to Argentina, is 1.314 meter above sealevel so it will be cold there… make sure to have some warm clothes.
– For planning, visit the website of the park from CONAF.

Want to read more? You may like these blogs:
– Hiking to Cochamó aka the Yosemite of Chile
– Volcanoes and Lakes of Vicente Perez Rosales National Park
– Exploring the Petrohue Falls and River