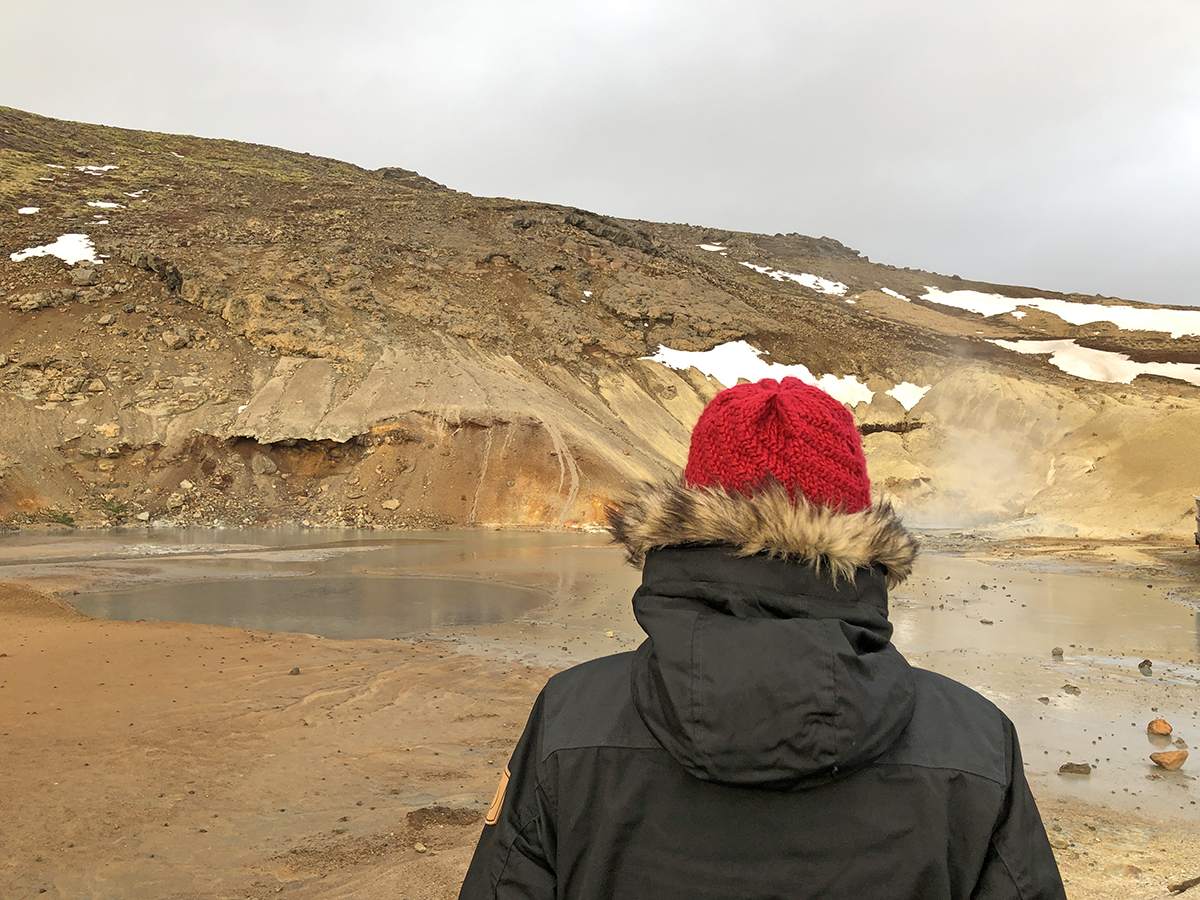 The Reykjanes Peninsula: everyone has been there but nobody really knows it well. Keflavík International Airport is located here and everyone who arrives in Iceland by plane will be introduced to the Reykjanes Peninsula upon arrival. Yet most tourists jump on board a bus as fast as they can to go to Reykjavík or the Blue Lagoon. Some rent a car and leave from here for their adventure.

I also used to be such a person, who has now been on the Reykjanes Peninsula more than 20 times, without really paying attention to it. When I was invited to join a Lava Caves & Volcanoes excursion with Basecamp Iceland, I didn’t hesitate for a moment and confirmed my participation.

Always take the weather with you …

We have planned our tour on our last full day in Iceland. The day before we came back from the iceberg lakes on the Icelandic South Coast in order to avoid a raging storm. It now also hits the area where we are staying and in the morning the road between Hveragerði and Reykjavík appears to be closed. Luckily we don’t have to be in town before noon for our tour, so in the morning we sleep in, take a plunge in the hotpot of our hotel and pack our things.

The Lava Caves & Volcanoes excursion starts in the Volcano House in the heart of Reykjavík. You will receive an open voucher for this, but I definitely recommend that you visit the film before you go on this tour. In this way you get a good picture of the fierce forces of nature that Iceland has suffered from, among othem the volcanic eruptions on the Westman Islands and of course the more recent one at Eyjafjallajökull. As it was my tenth time in Iceland, I knew about it already, but for David it was his first time and he was deeply impressed by all the natural disasters to which Iceland has been exposed in recent decades.

From the Volcano House we are picked up with a minivan. Together with a group of Americans we set off on the Reykjanes Peninsula. Our guide Eric tells us that the morning tour has been canceled due to bad weather, but he sees no reason not to continue the afternoon tour. It is only an understatement that it’s still pouring rain like cats and dogs, but as the Icelanders themselves say: “there is no such thing as bad weather, just bad clothing.”

Eric is an American who has lived in Iceland for years and has seen tourism change in recent years. He has been working for Basecamp Iceland for a few years now and does the excursion we make every day. You would expect it to be boring, but nothing could be further from the truth. He tells enthusiastically about the UNESCO Geo-park that we are going to visit. 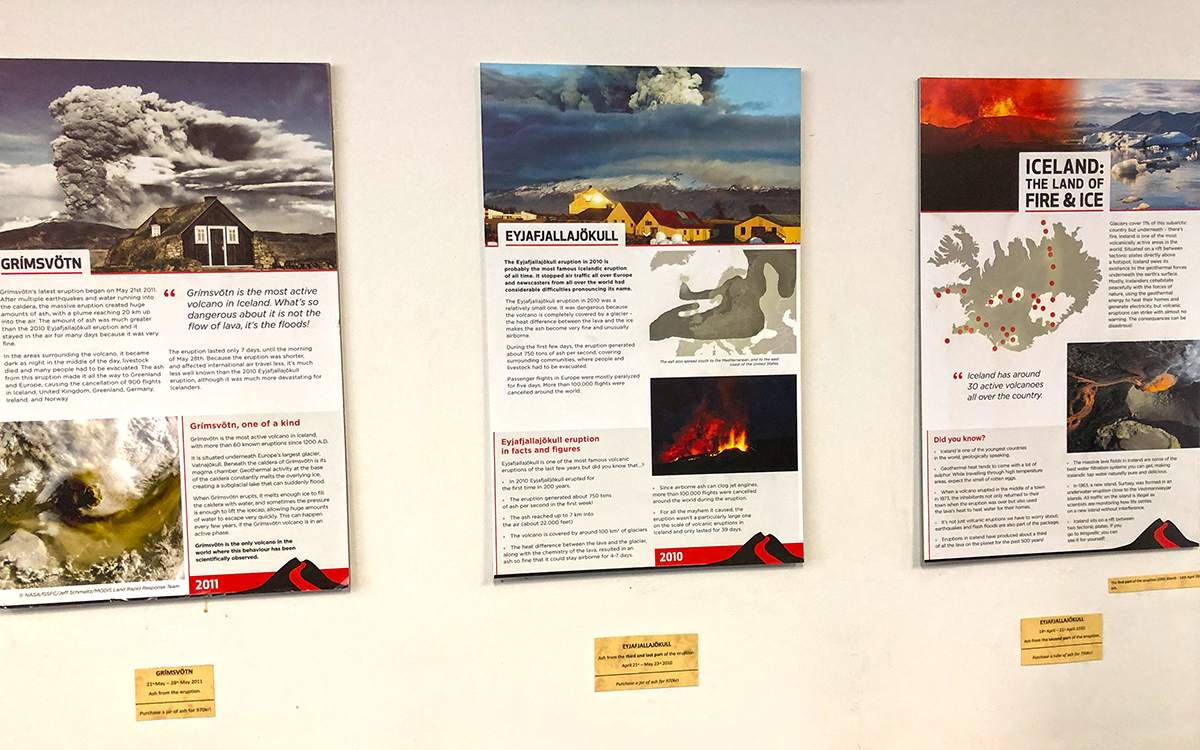 The submerged Mid-Atlantic Rug mountain range that separates the Eurasian continent from the North American continent comes ashore at the Reykjanes peninsula. This fault line rises above the ground at the famous Þingvellir, just northeast of Reykjavík. There are various forms of volcanic activity on the peninsula and four locations are visited during this tour.

We make the first stop of the afternoon at Lake Kleifarvatn, the largest lake in the Reykjanes Peninsula. According to the Icelanders there is a monster in this lake, but this has (of course) never been seen by anyone. In the year 2000 an earthquake took place in this area that caused an underground river to arise, causing the water level of the lake to drop.

The stop at the lake is very windy. One of the first things I learned during my Iceland trip is to always hold your door well when you get out of the car, because you would not be the first one where the door is blown out of the car by gusts of wind. Today is such a day when that could just happen. Fortunately I remember the warning and although it is raining like crazy, we take a look at the waterfront. Because of the cold there is a huge load of ice on the edge of the lake: a very special sight. 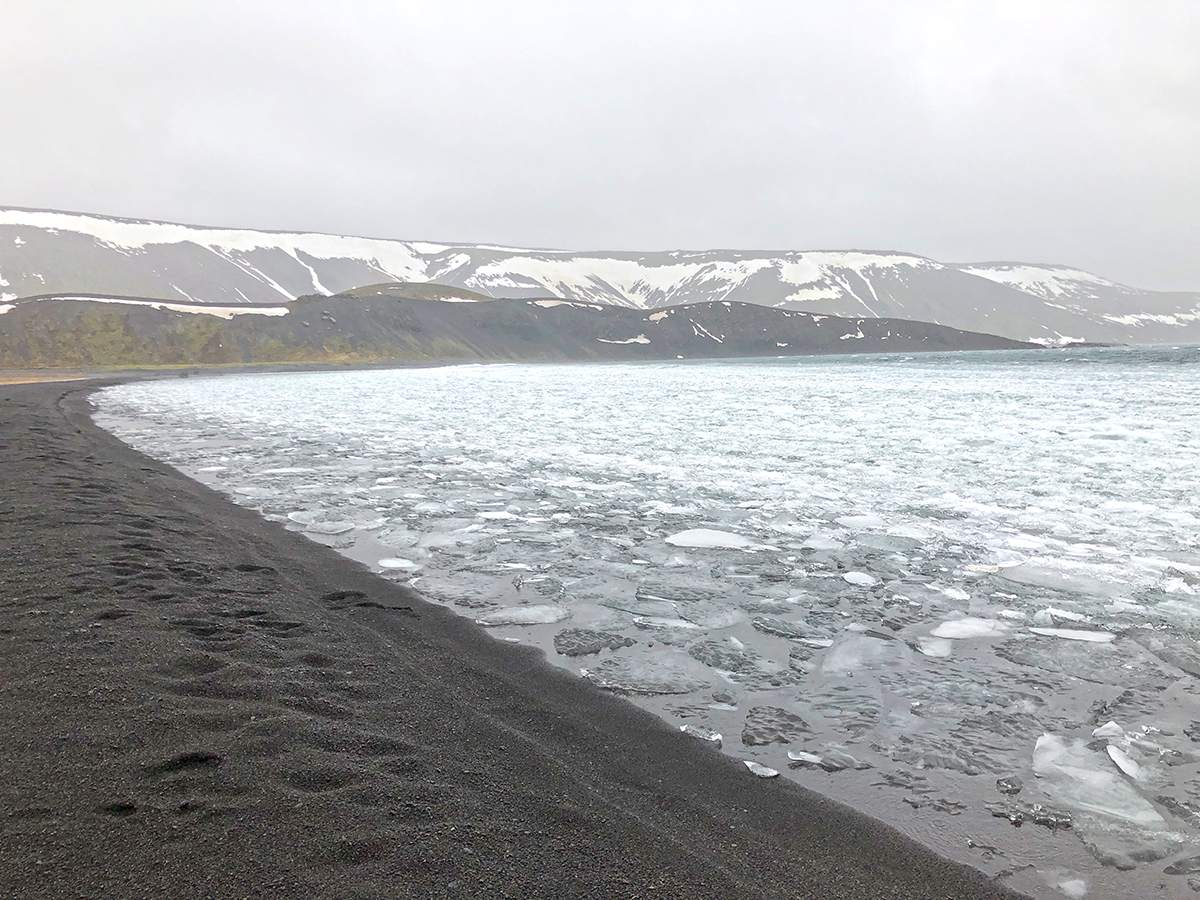 Our next stop is at the geothermal field of Seltún near Krýsuvík. This area contains brown mountains, warm currents, simmering pots and more special natural phenomena. We take a short walk on a boardwalk along the geothermal activity and have plenty of time to take pictures. I was here a few years ago too, but I can never get enough of the plumes of smoke, the colored mountains and hot springs. I just ignore the smell of rotten eggs that come with it, it’s all part of the game, right?

Opposite Seltún, on the other side of the road, lies the green lake Grænavatn. This lake is 44 meters deep and an explosion crater. The church of Krýsuvík is also nice to visit here, but because we had very bad weather, we decided to skip this. 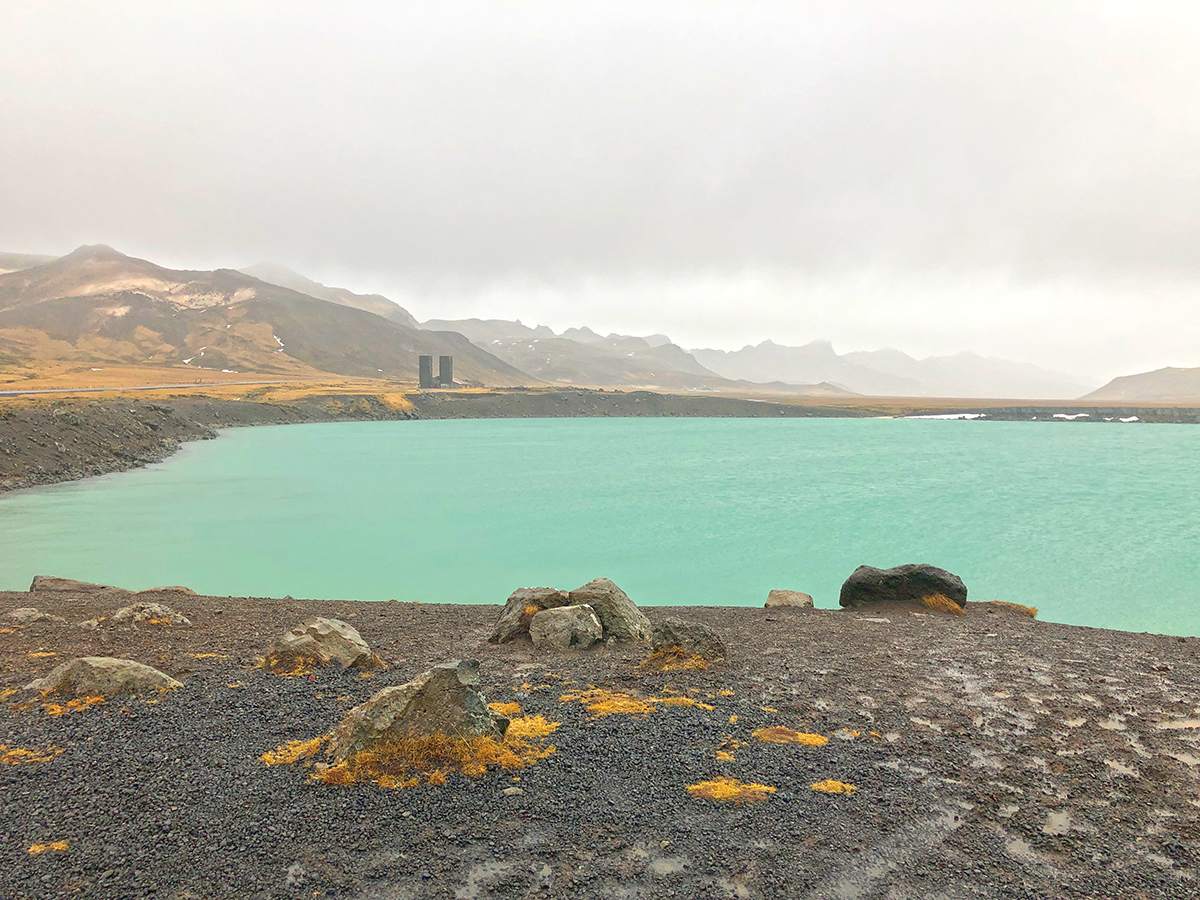 Into the lava caves!

Then it’s time for the highlight of the excursion: the lava caves. We still have about 45 minutes to reach the entrance to the cave, which is hidden deep in the lava fields. The Geopark is supposed to be filled with underground lava caves, but nobody knows exactly how much and where. The cave that we are going to visit, Leiðarendi, consists of two different “tubes” as they call it: one that originated around 2000 years and one that originated 1000 years ago. Both arose during a volcanic eruption where the lava formed these caves. Leiðarendi is one of the best accessible lava caves in Iceland and may only be visited with a guide.

From the parking lot we walk to the cave entrance in about five minutes. This is covered with a load of snow and so it takes a while before we actually stand in the cave. From here it is already dark immediately. Our helmets and headlights are on and we are told that there is some ice on the bottom of the cave and that we have to walk carefully. And … always pay attention because otherwise you will hit your head. 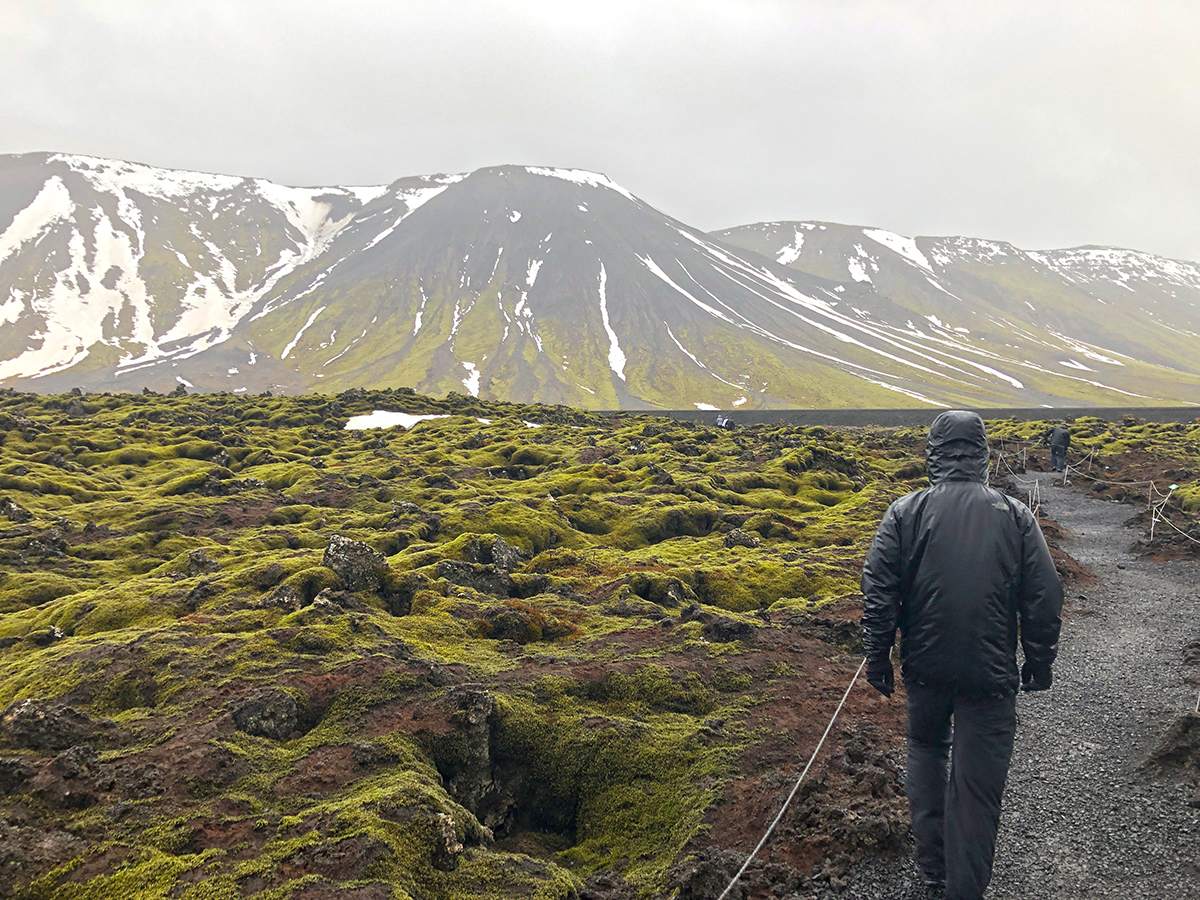 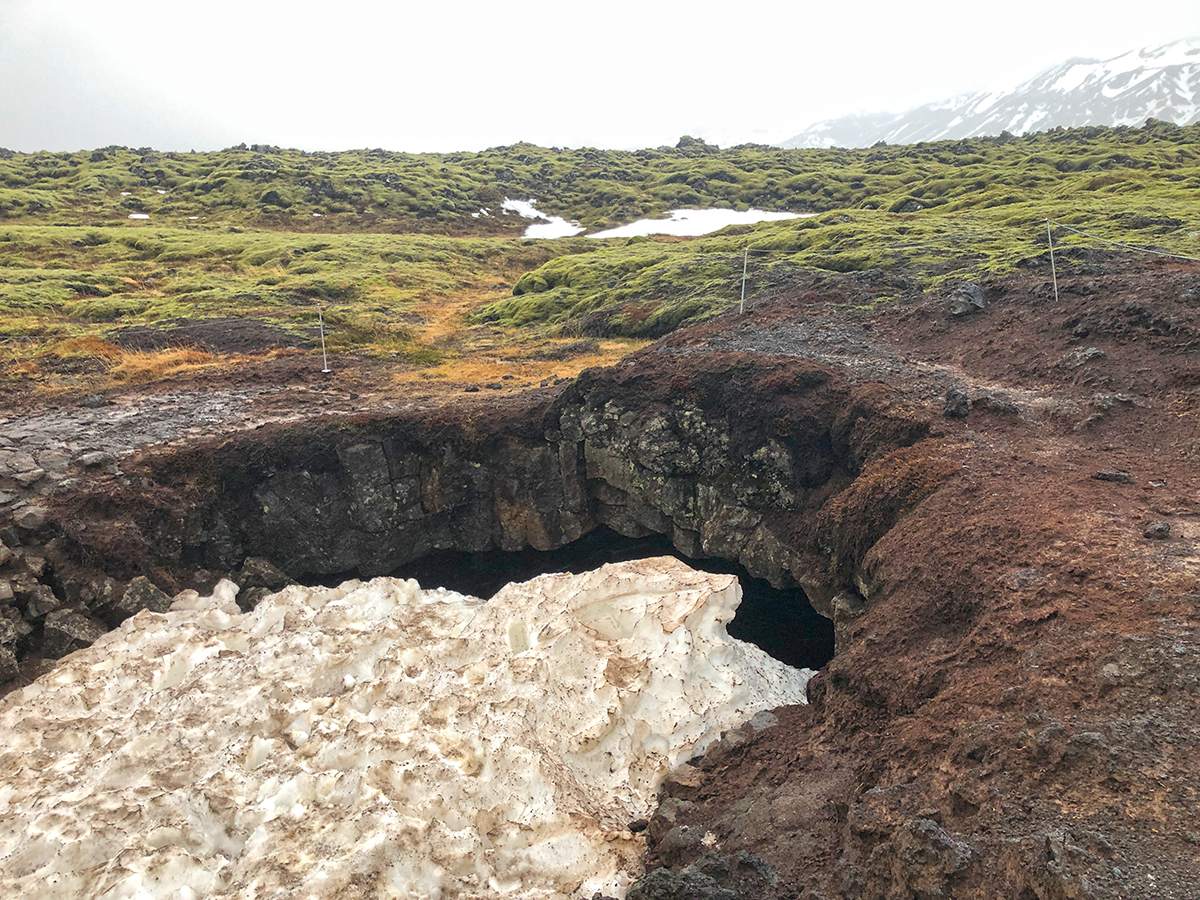 The entrance to the cave is quite large, but soon we arrive at narrower sections where we sometimes have to crawl through narrow passages. The ground is cold and moist and soon we are also cold and wet ourselves because the water trickles down from the ceiling. Along the way Eric explains everything about the origin of the cave, the various shapes that can be seen and the ice formation.

Then he asks if we feel ready for the adventurous part, where we have to crawl through a narrow space in a kind of “plank position” (the one that you do at the gym!). We’d love that and one by one we crawl to the next part of the cave. Here we are all asked to sit on a small ledge and one by one he turns off our headlights. It is deafeningly silent and you literally don’t see anything anymore. The only thing you hear is the breathing of the others and the occasional drops of water. For the rest, it is terribly quiet.

We sit like that for a minute and then the lights go on again. Eric asks if we have any idea where the exit is. David indicates that he felt a slight stream of air and that it must be that way. We walk a short distance and then arrive … on the other side of the cave. It turns out to be a round cave and without us noticing it ourselves, we walked a loop.

We climb out of the cave again and run back through the still-flowing rain to the bus, where we are treated to hot chocolate before we return to Reykjavík. 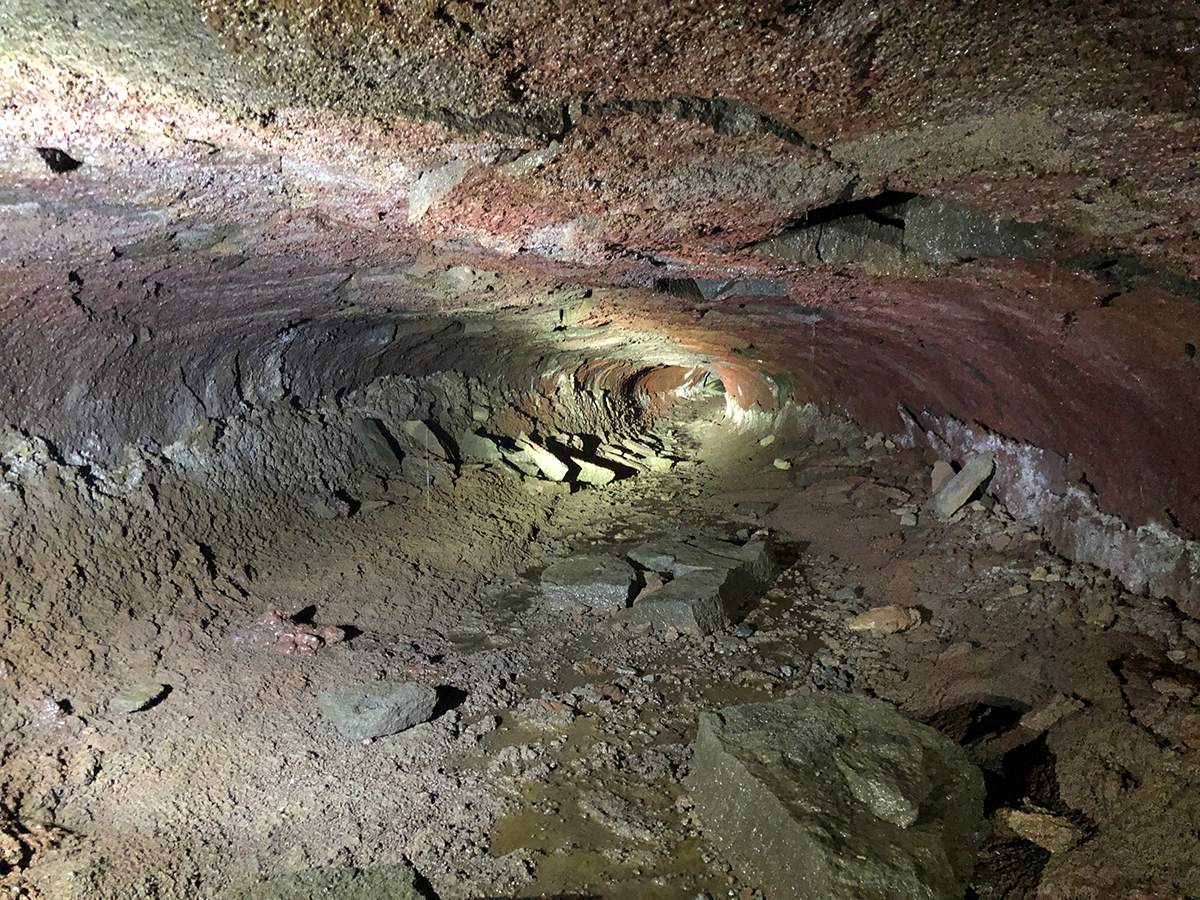 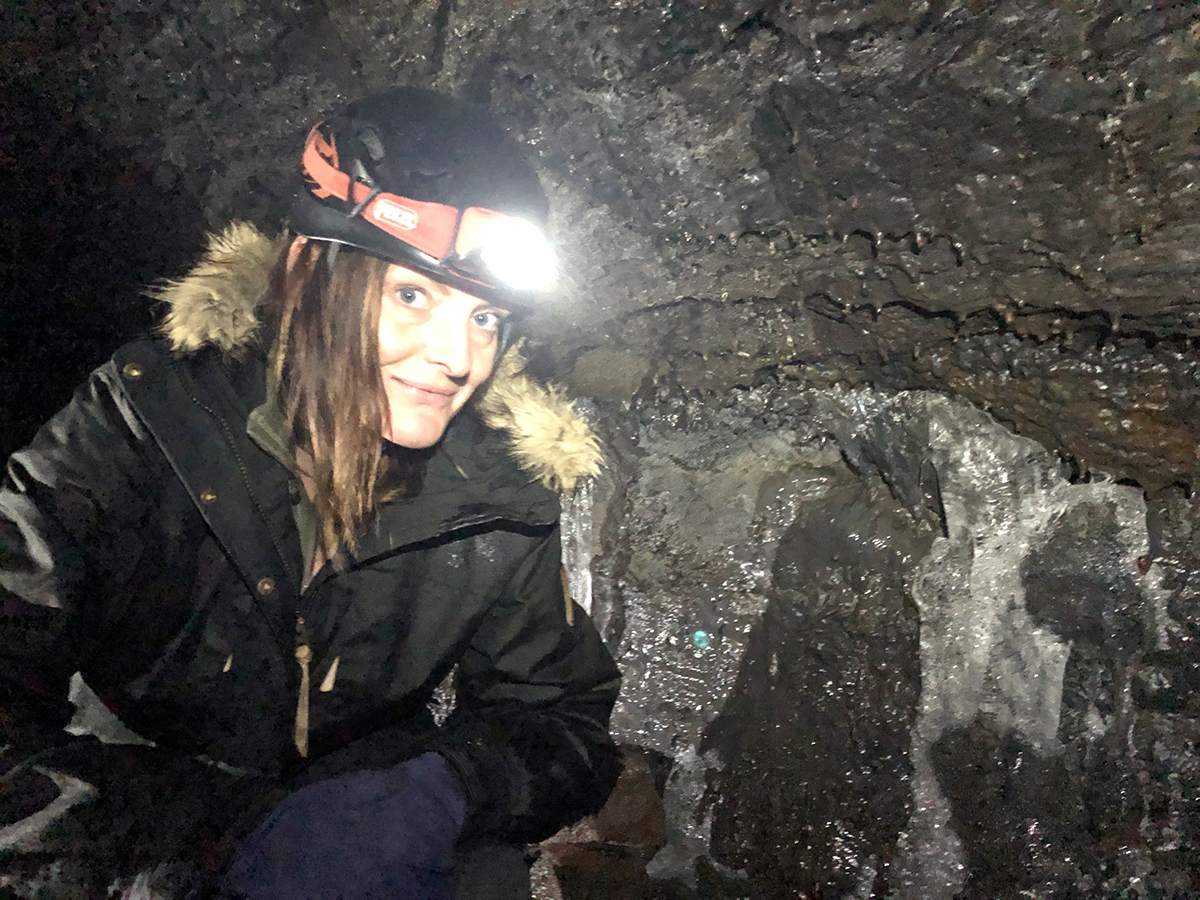 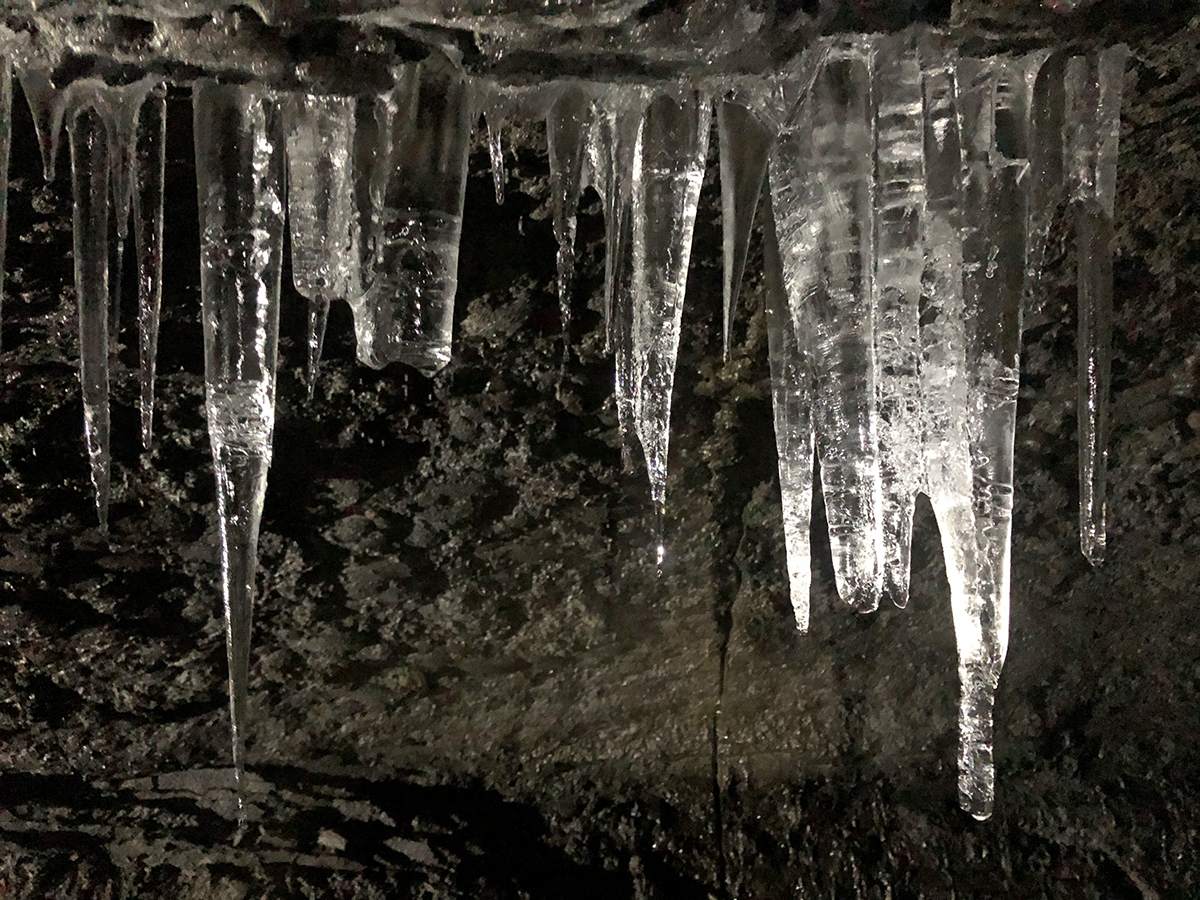 The Lava Caves & Volcanoes excursion can be made without problems for anyone who has no difficulty walking. The distance you travel in the cave depends on the strength of the group. We completed the full lap, but when people in the group are less agile, it is possible that you make a shorter round. In terms of clothing you should wear warm, waterproof clothing, shoes with a good profile and warm gloves, preferably waterproof. In the cave it is about two degrees Celsius, also in the summer! Also check this article on how to stay warm in Iceland in the winter! A headlamp and helmet are mandatory and are provided. The tour leaves daily, there is a morning and an afternoon tour. If desired, a pick-up and drop-off is possible at your hotel in Reykjavík.

The lava caves mentioned cannot be visited independently and this is also strongly discouraged. During our excursion we met a group of Asian men who had entered the cave independently, our guide irrevocably sent them out again. You wouldn’t be the first to get lost here. 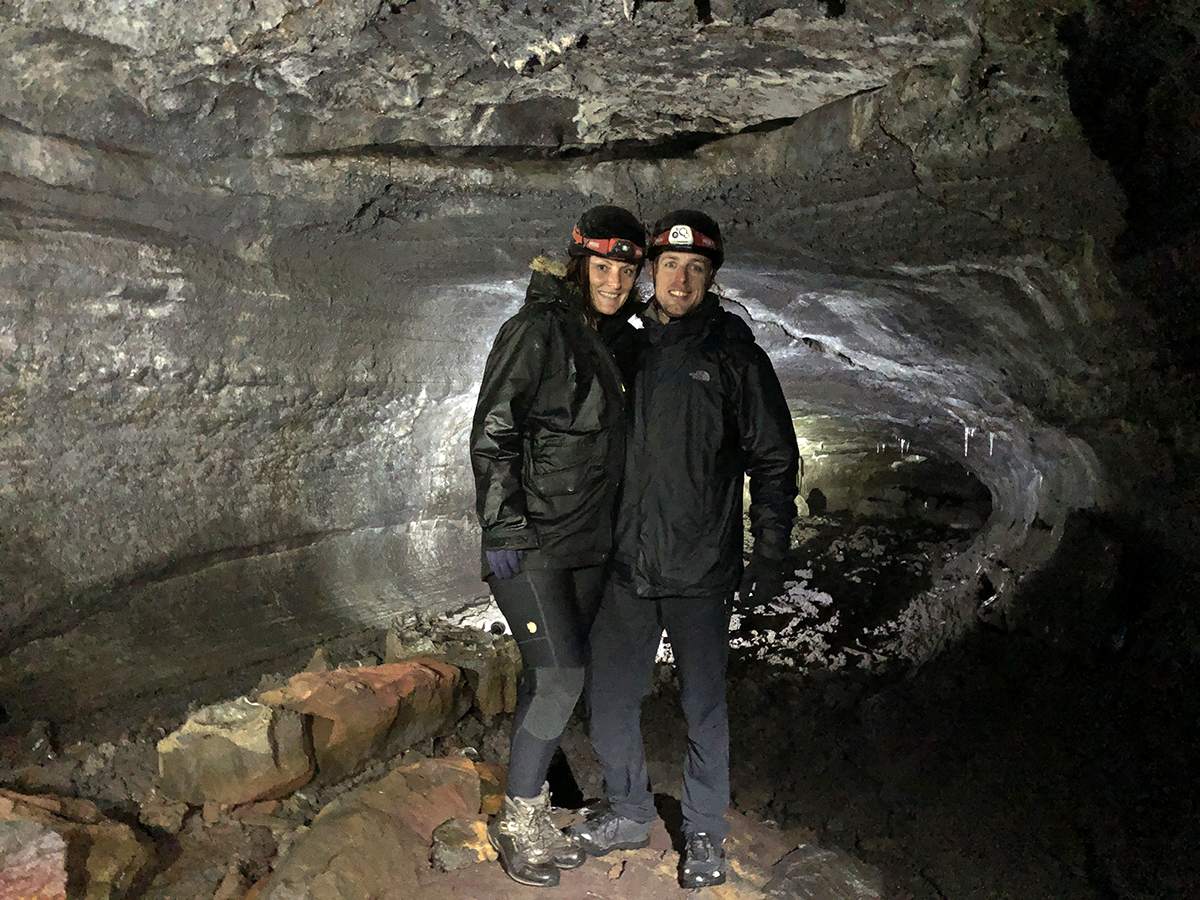 This tour is a great add-on to your visit to Iceland, also because the Geopark is often overlooked, yet it is a great introduction to the activity of mother nature in Iceland.

We made this tour at the invitation of Basecamp Iceland. All opinions given are of course only ours.