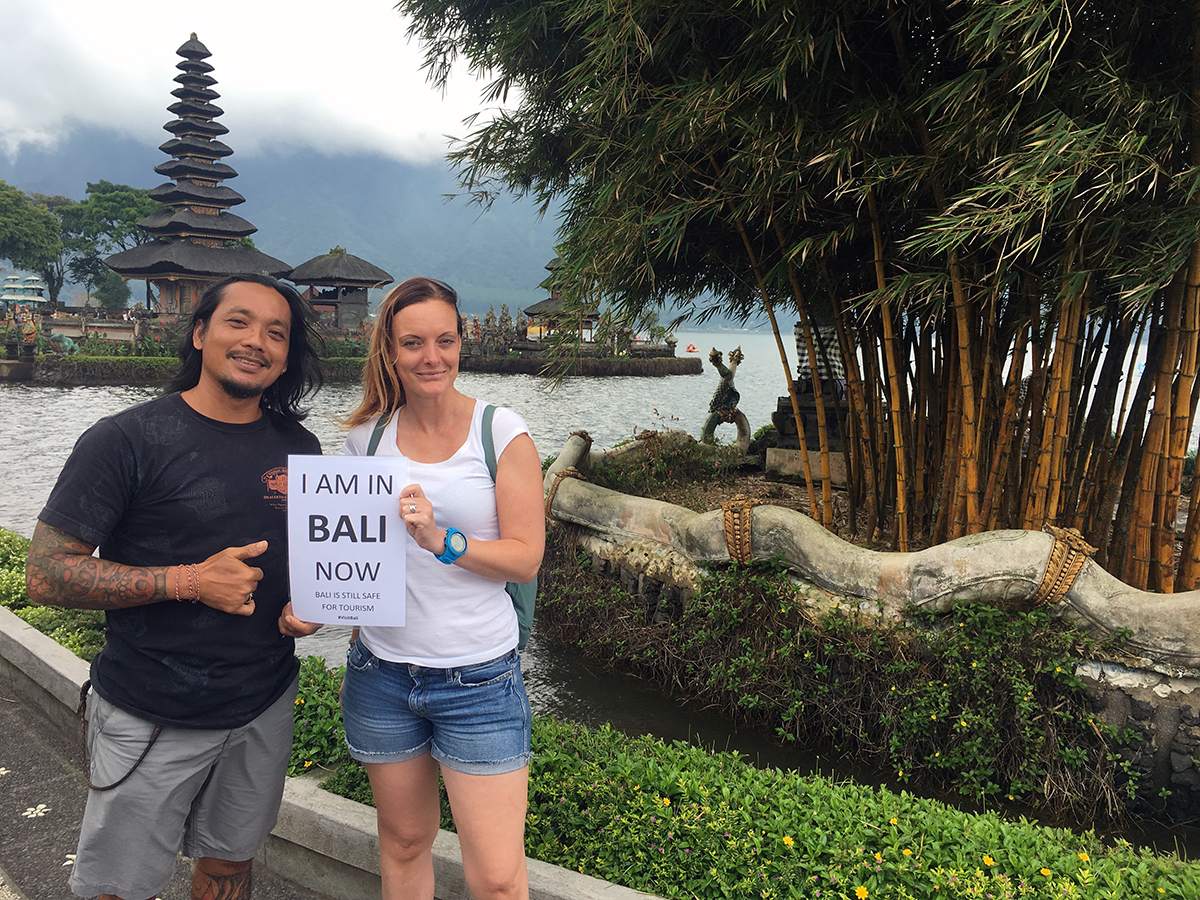 A good question I was asked a lot over the past few weeks, is ‘Is Bali safe?’ My answer to that question is always the same. ‘Yes of course is Bali safe. Why would Bali not be safe?’ And then people stare at you, feeling uncomfortable and hesitating to say something about that volcano that, according to the media, is about to blow. I’ve arrived in Bali a little over four weeks ago and I can tell you one thing, which is that I barely noticed anything about a volcano that is about to erupt. The only thing I did notice were some small tremors when I was staying in Sidemen a couple of weeks ago. That’s it.

For the Balinese it’s pure drama that the Agung volcano is about to erupt. Not only because some 120.000 people had to flee from their homes, but also because the tourists are staying away because of this. I have heard various bizarre stories from fellow travelers such as:

– I would fly back home from Lombok through Denpasar but decided to rebook and fly through Kuala Lumpur instead, just in case the volcano erupts and the airport will closed.

– I don’t dare going to Sidemen, because what if I’m there and the volcano erupts. Then what?

– My Australian friends have decided to stay home because of the possible eruption. They want to go home whenever they feel like it and don’t want to risk being stuck in case it erupts.

Most of the time, I was lost for words when people gave me all kinds of reasons for their worries. Because in reality, there is little to worry about. Of course, you may be in trouble when the volcano erupts but then again, volcanoes can erupt anywhere in the world at any time. And if Agung erupts, it might as well be that the wind is blowing in the right direction and the air transportation will not be affected.

Let me give you an example. The most famous volcanic eruption of the past years is probably the Eyjafjallajökull one in Iceland. Airports were closed all over Europe and people were stuck all over the world for weeks. However, there is always some volcano about to blow in Iceland. Take Hekla for example, which erupts about every 10 years, most recently in 2000. Meaning that it’s now some 6 years over due, but nobody seems to worry about that. And just two days ago, I read this article on National Geographic about a possible eruption of Bárðarbunga, however I don’t believe many people will cancel their Iceland trip for this reason.

And so it saddens me deeply that travelers are staying away from Bali. The seismic activity of Agung has lowered and a part of the families having to flee is now able to return home again. The safety zone around the volcano has been brought back from a 12 km radius to a 6 km radius. Meaning that the danger zone is less then one percent of the whole surface of Bali. People don’t even talk about the volcano anymore and have returned to their daily lives. When asking locals about Agung, most of them said that they don’t think an eruption is about to happen anytime soon. Maybe in ten years. Maybe never. But maybe when I’m due to fly back home tomorrow. Nobody knows.

So is Bali safe? I truly think it is. Would I book another plane ticket tomorrow? Absolutely! Forces of nature can be found anywhere in the world and not just here. So please don’t let a possible volcano eruption in Bali keep you from visiting this beautiful island!

Curious about my personal story about why NOW is the right time to visit Sidemen and how I helped the refugees out during my visit? Then read this post.

Want to read more? You may also enjoy these blogs:
– Highlights of Ubud and around
– Safe or not? Traveling to Nepal after the earthquake
– Hiking to Mount Everest Base Camp: things that nobody tells you!