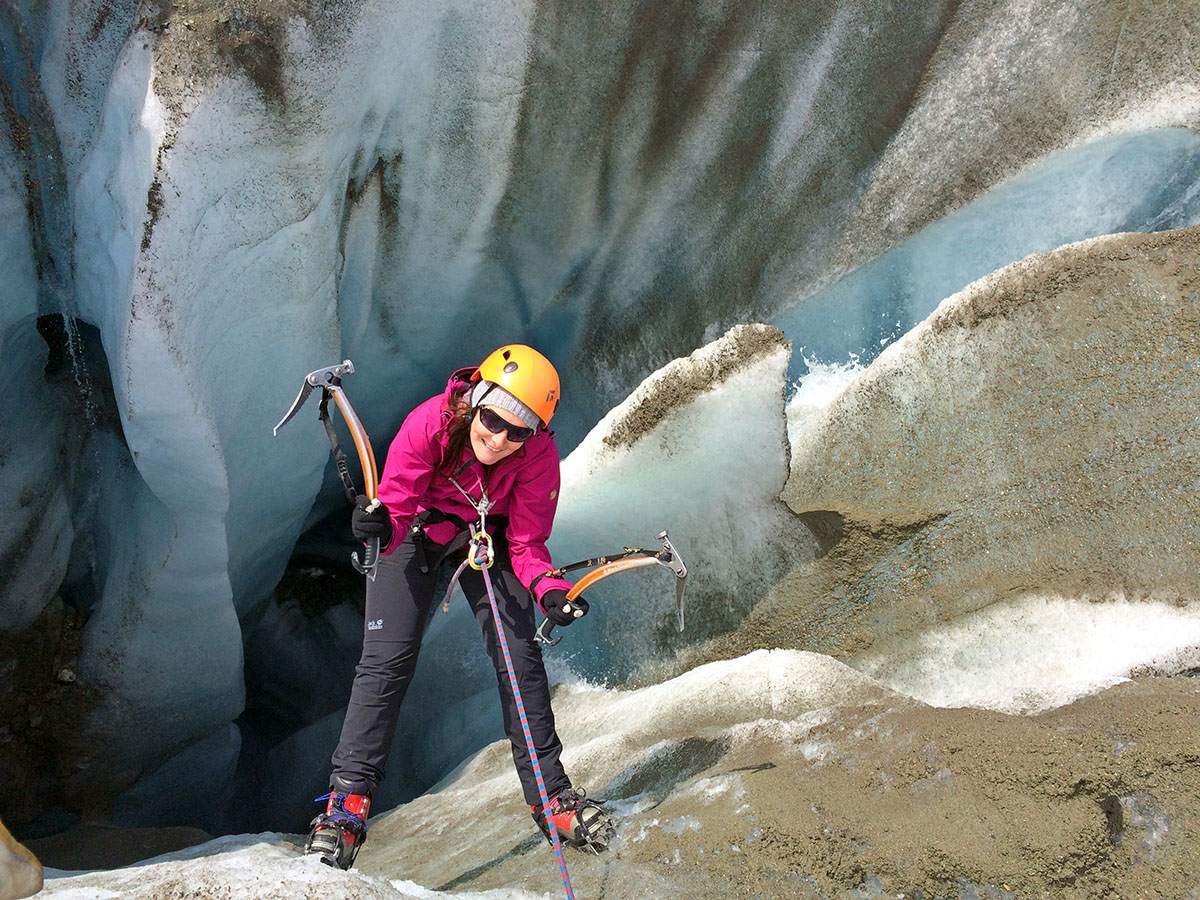 Welcome to my blog about ice climbing in Alaska. If you love Alaska and enjoy watching tv, you may have heard of the tv series Edge of Alaska. Described by Discovery Channel as the toughest town in America, it’s in fact not just a town in a tv show, but one of my favorite places in the world.

The first trip here was back in 2009 and ever since I have been looking forward to returning. In the summer of 2015, this was finally the case! Totally excited about my upcoming 2.5 week trip to Alaska, I cycled home from work when I slipped and fell with my bike. It had been pouring with rain all day and the cycle-paths were slippery. I spent all night in the hospital. Eventually the doctor managed to tell me that at least my ankle wasn’t broken but it was badly bruised. I could go to Alaska, but hiking and ice climbing in Alaska were out of the question. But I was extremely disappointed as ice climbing in Alaska was one of the things I was looking forward to most on this trip. I was awake all night long, overthinking the situation.

However, of course I still went to Alaska and within ten days of my accident, I arrived in McCarthy, also known as the Edge of Alaska. I was insanely happy to be back but also extremely sad. I had been hiking for small bits earlier on during my trip but that wasn’t entirely pain-free. However, I could walk without too much pain for about an hour.

I had arranged my ice-climbing tour with St. Elias Alpine Guides and as I went to see them in their office, we agreed that I would still head out onto the ice with them and see how it would go. It was a tough decision to make because it could either go well or I could screw up my ankle even more and lose all chances of actually hiking Harding Icefield Trail in Seward which I planned for later on during my trip.

But it went pretty well I have to say. I got to wear giant boots that fit the crampons made for ice climbing (they are different than regular crampons) which were pretty sturdy for my ankle. So off we went the next morning. First up was a hike to the Root Glacier, one of the most breathtaking hikes on the planet if you ask me. It’s on a gravel trail next to the moraine of the Root Glacier, heading towards the towering peaks of the Wrangell St. Elias Mountains.

I’d done this short hike (one hour, one way) before in 2009 and it was as beautiful as I could remember. After about one hour we reached the white ice, put on our crampons and headed out onto the glacier. My ankle was in a little bit of pain but no more than I had been on earlier short hikes I took on the trip. Plus I’d doped myself up with painkillers because trust me, ice climbing in Alaska was the number one thing to do on my bucket list and I did not want to let this opportunity pass by. 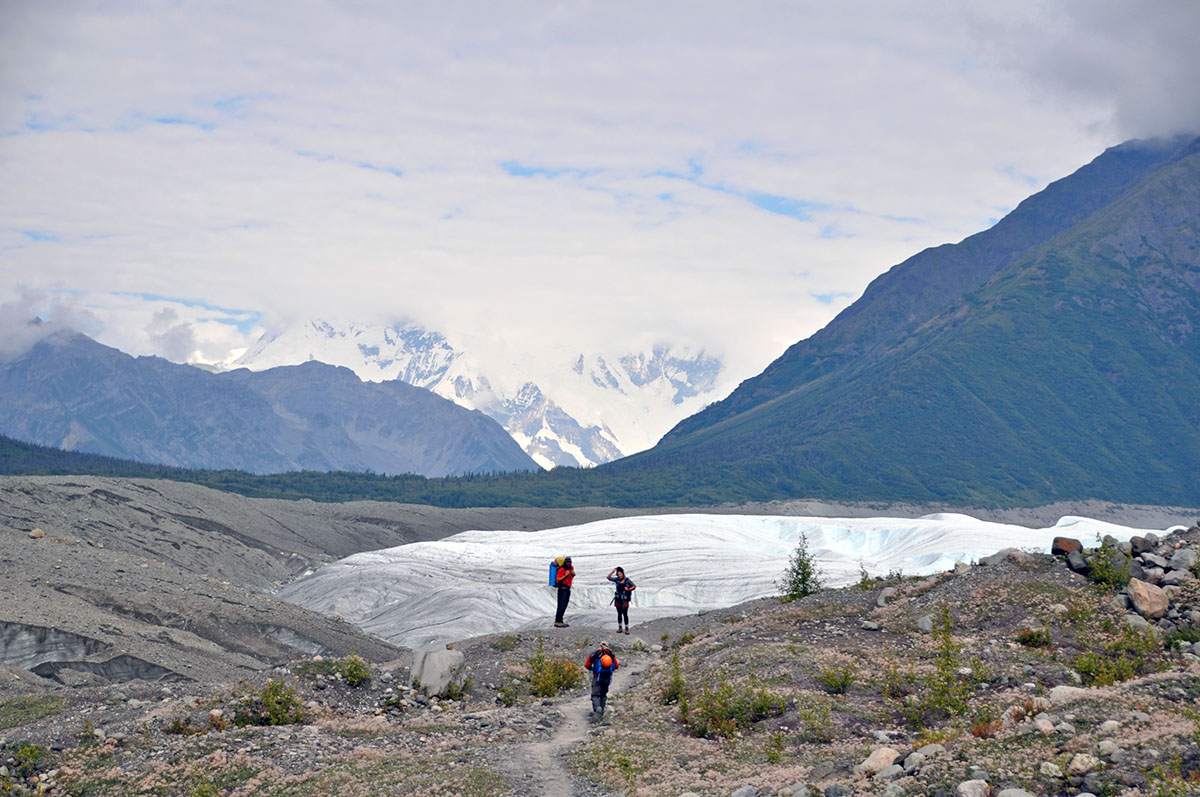 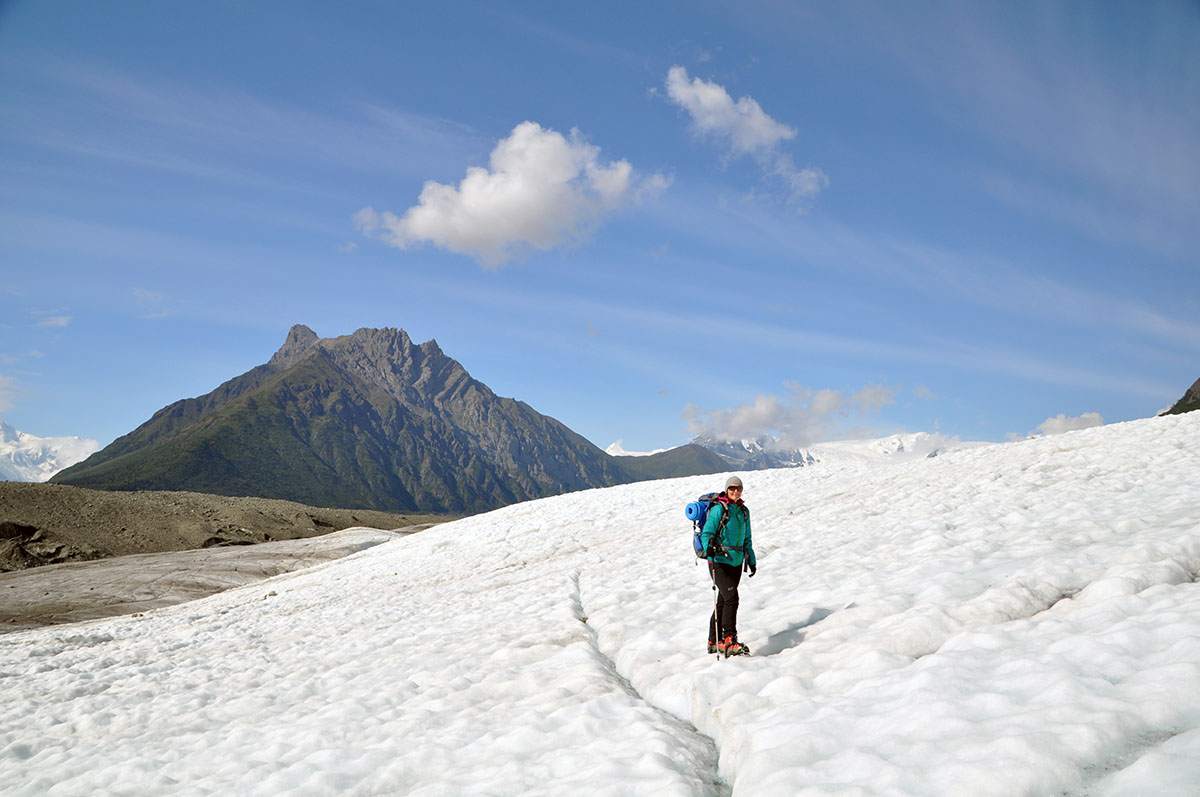 On the ropes while ice climbing in Alaska

Can you imagine I was super nervous on the moment the ropes got fixed? And when I was staring up at a massive ice vertical ice wall? I have to admit though, that once I was up, it actually turned out to be not that hard. Given the fact I had a weak ankle, hadn’t been climbing in years and was horribly out of shape, I think I did pretty well.

Just a few meters before the end of the wall, I dared to look down for the first time. Not a wise decision because at that moment, adrenaline kicked in and I started shaking uncontrollably. ‘Get me down’ is what I screamed at the guide. But he said ‘that’s adrenaline lady, you have to continue.’ So I started talking to myself and eventually made it to the top of the wall. I was extremely proud of myself at that moment. 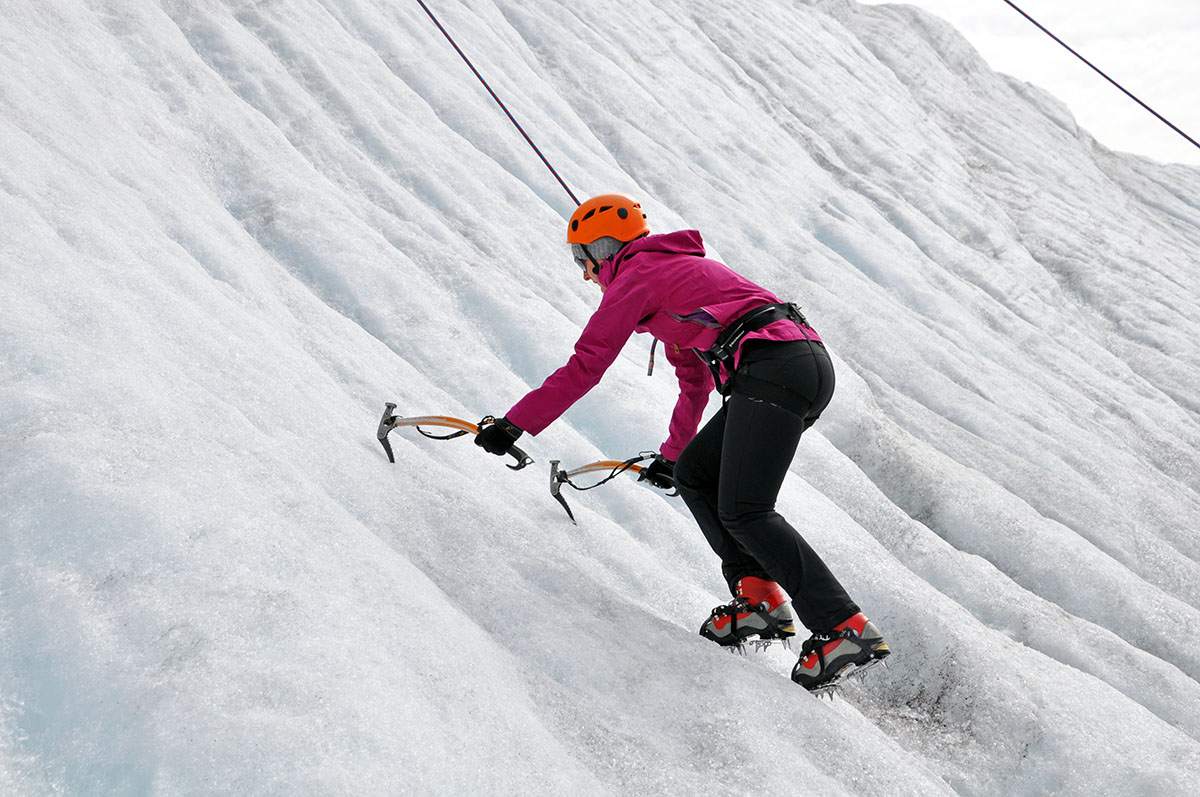 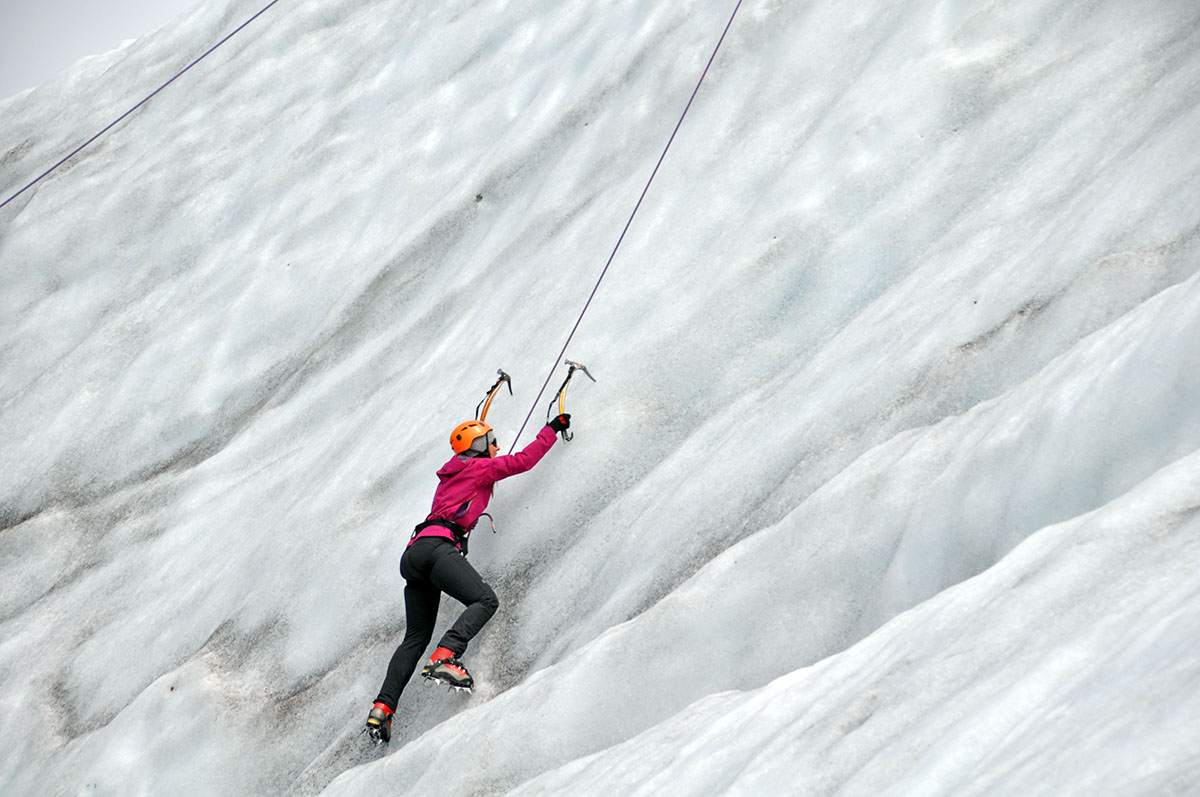 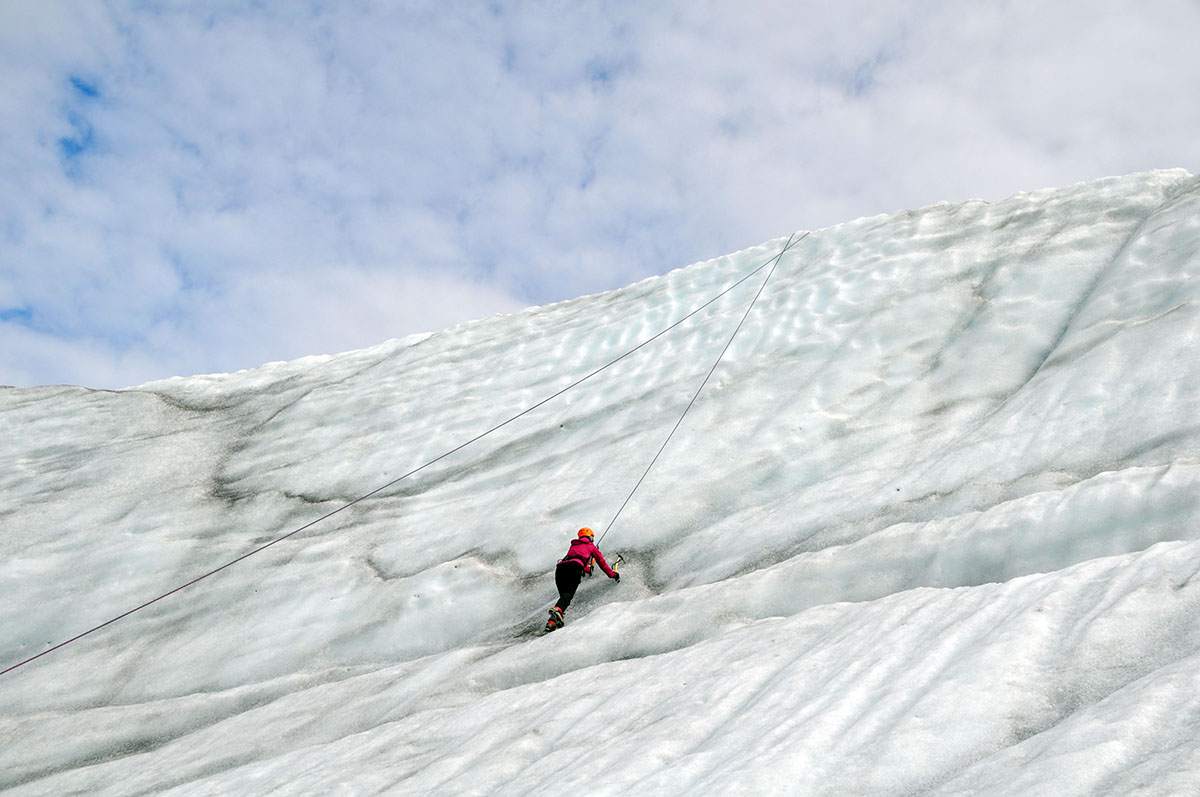 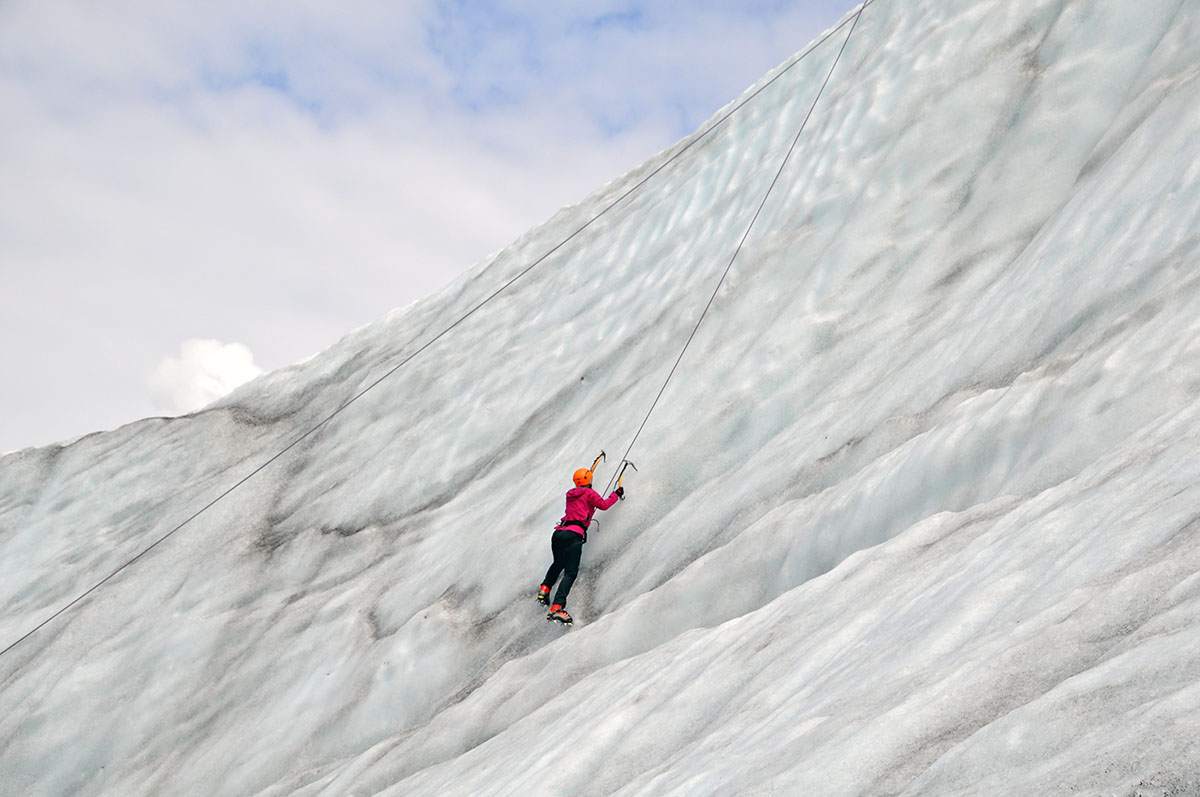 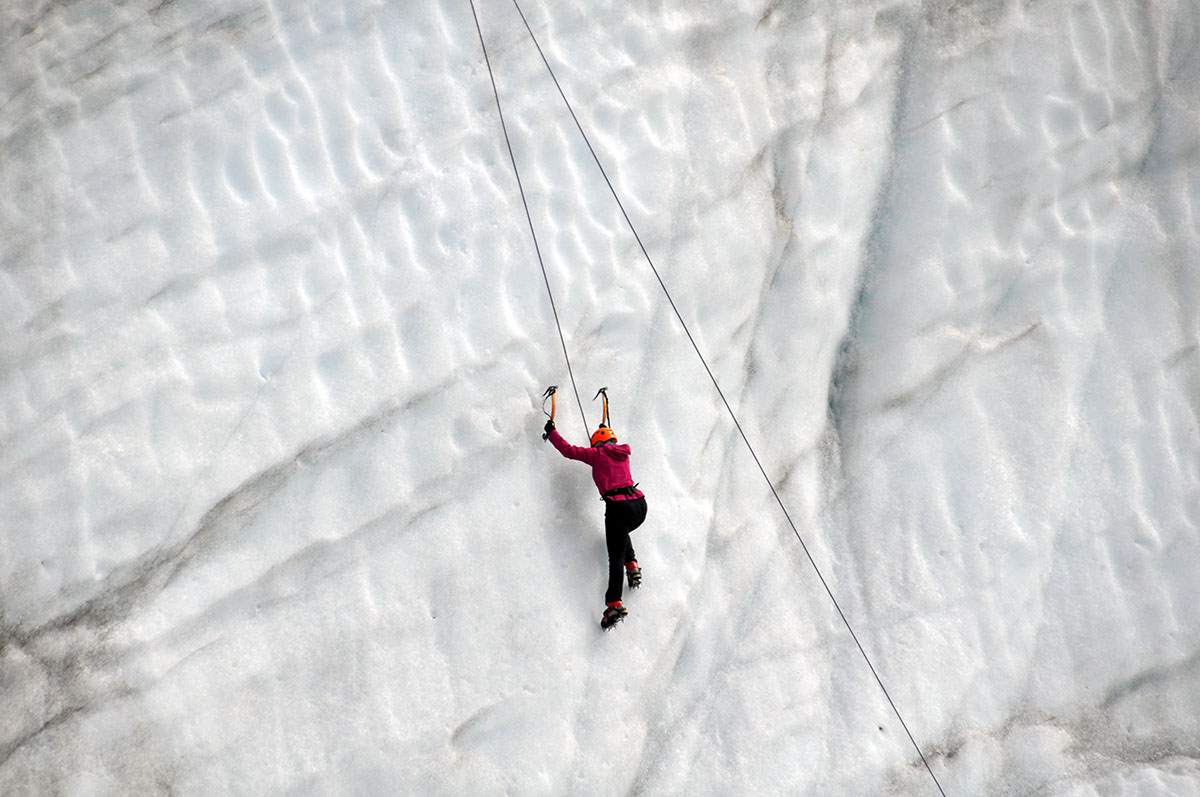 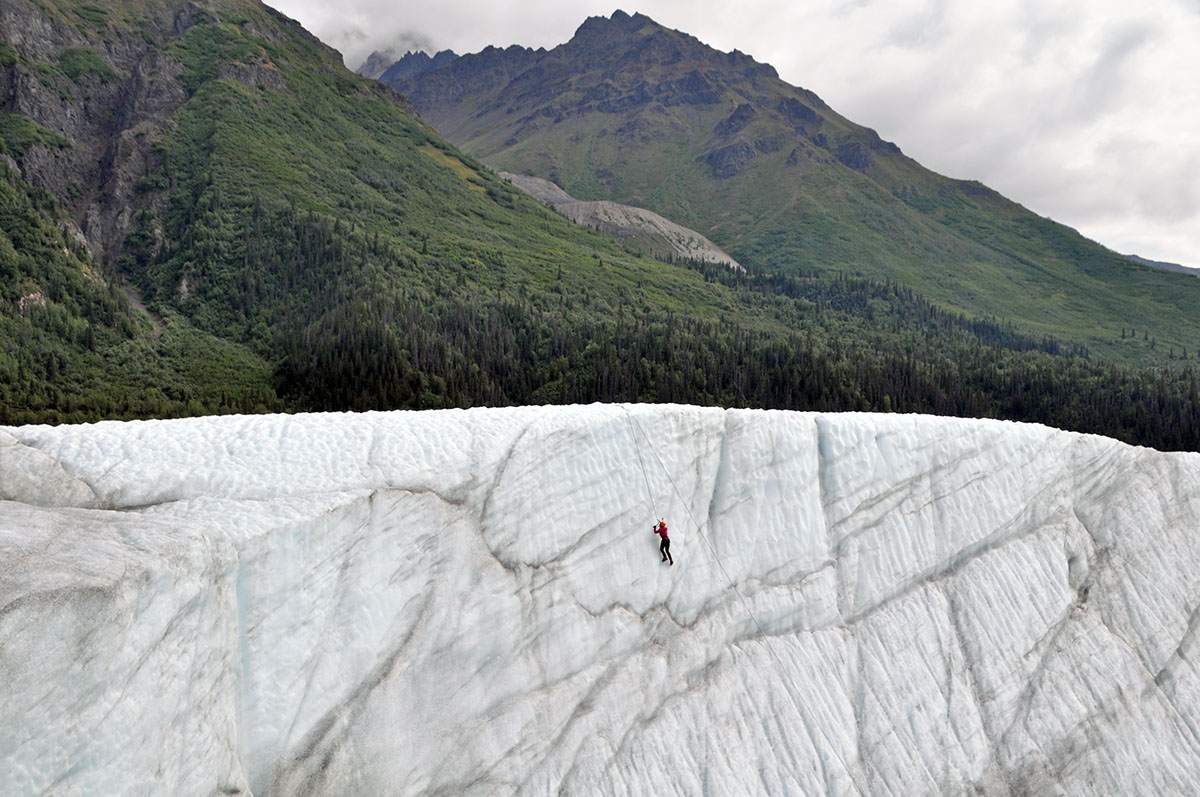 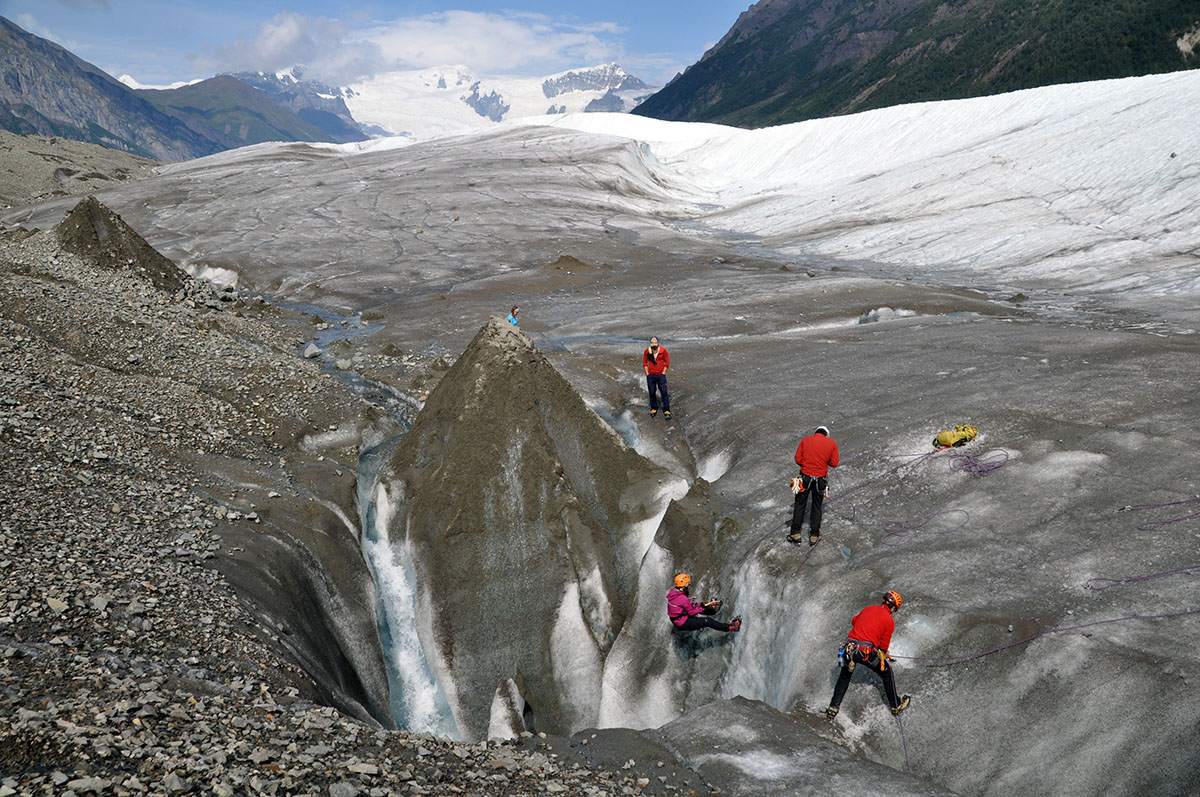 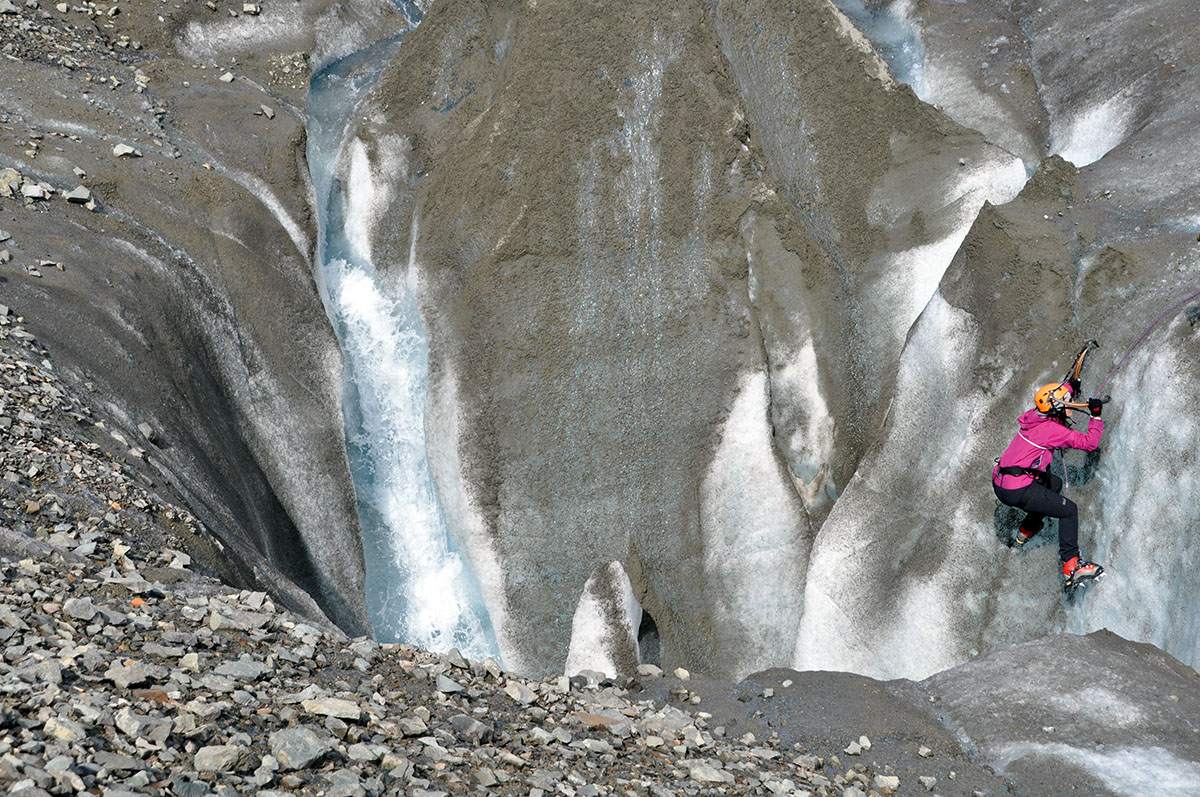 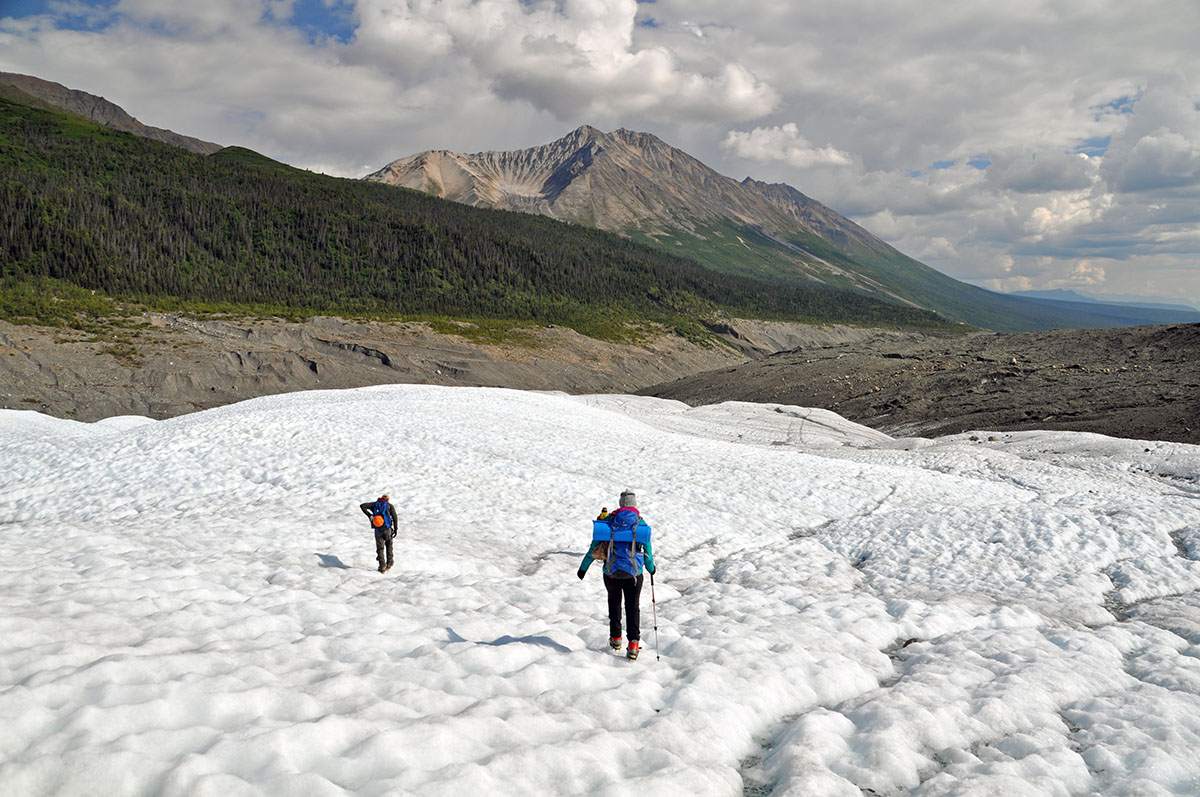 Movie of ice climbing in Alaska

The hike back to Kennicott was a painful but a good one. It had been a while since I had been in such an adrenaline rush, one that eventually lasted for quite a couple of days. At the end of the the trip, I still managed to solo-hike Harding Icefield. I also went glacier kayaking and basically just fell in love with Alaska all over again. Here’s a short movie my friend Martijn made. The lady in the green jacket isn’t me unfortunately, it was one of the other group members. She evidently was much better at climbing than I was.

Other places for ice climbing in Alaska

If you won’t be able to make it all the way to Wrangell St-Elias National Park, there are a few other places you can go glacier climbing in Alaska, such as the Exit Glacier in Seward and the Matanuska Glacier between Anchorage and Valdez.