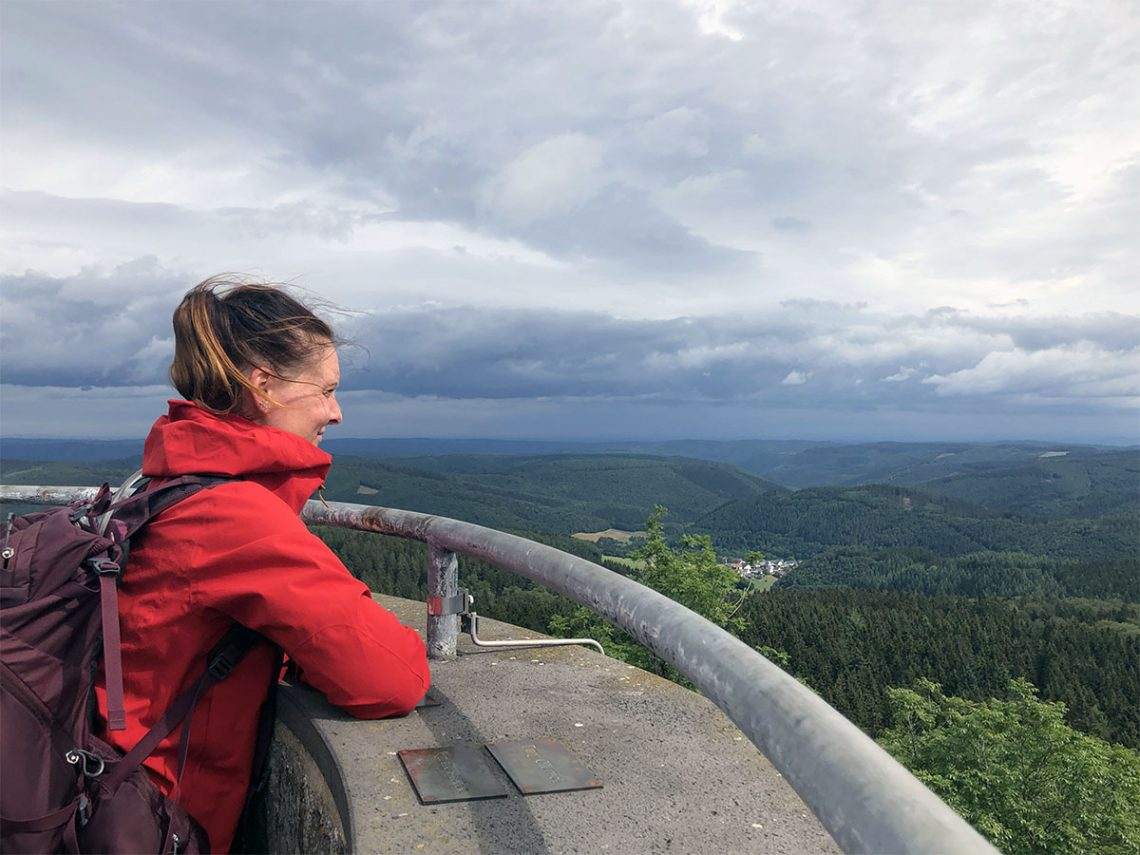 Highest peaks always appeal to my imagination. So while I was passing through the Eifel recently, I decided to make a stop at the Hohe Acht, the highest “mountain” in the Eifel. The word mountain is of course relative because it is just 747 meters high. Because I also some weird kind of thing in my head with the number 747 (you will probably not be surprised that I am an avid airplane spotter) I thought it would be a nice idea to climb the highest mountain in the Eifel after the highest mountain in the Sauerland which I climbed last year. Here you can read all you need to know about climbing the Hohe Acht in the Eifel mountains in Germany.

As mentioned, the Hohe Acht (the high eight) is the highest point in the Eifel. This summit is located in the north of the Eifel near the village of Adenau. From Arnhem in The Netherlands, where we live, it’s a short 2.5 hour drive only. The north of the Eifel is home to the Hocheifel, an area with the highest peaks of the Eifel range. The mountain is an extinct volcano from the Tertiary and offers a panoramic view of the Westerwald, the Hunsrück and the Siebengebirge in good weather.

Heading up Hohe Acht: my experience

It is a gloomy day in early summer when I drive home from the Moselle region where I spent my vacation. After an overnight stay at a campsite just south of the Hohe Acht, my holiday has come to an end, but not before I have climbed the Hohe Acht. I enter “Hohe Acht” on Google Maps and navigate to the “Wanderparkplatz Hohe Acht” on the L10.

Upon arrival there are already several cars and a camper, but it does not look very busy. There are several circular walks you can make and I decide to go for the H3. Unfortunately I lost the trail after fifteen minutes because I seem to be not paying attention to the markings, which are plenty. Fortunately, the road to the Hohe Acht is straight up and sometimes even steep. Getting lost is impossible. A paved trail has been constructed for cyclists, but little use is made of this.

After about twenty minutes of walking I arrive at an opening in the forest. In front of me is the Kaiser Wilhem Turm from where you can admire the view. I climb up a bit uncomfortably, after all it is still corona time and I don’t want to bother others. Once at the top there appear to be three other people, it just fits a meter and a half away.

Fair enough, despite the gray weather and the threatening skies, the view is superb. I stare into the distance for a while but quickly become distracted as more people climb up the tower. Time for me to descend again and leave them some space.

I make a half-hearted attempt to find the H3 again but then water starts to fall down from the sky. And since I don’t feel like getting soaked this time, I quickly descend back to the car. A nice micro adventure in Germany for on the way, not super special, but with a fabulous view.

Useful tips for your visit to Hohe Acht

There are several trails up, a simple but occasionally steep forest trail and a cycle trail. The latter was hardly used. There are several routes to the top and beyond. The H2 is 5 km long, the H3 is 4 km long and the “Kalderborn cow walking trail” is 23.5 km long.

There is plenty of parking, but avoid busy times and the weekends when racing at the Nürburgring. During several weekends it is free to drive here (also on the weekend that I was there) and that caused quite a bit of noise. It was certainly not a very relaxing experience.

I also made a short video: enjoy watching!

Hopefully you found this article helpful. If you want to know more about Germany, please visit my Germany homepage with numerous tips for active things and beautiful hikes in Germany. This article contains affiliate links. If you make a purchase via such a link, we will receive a modest commission for you at no extra cost.