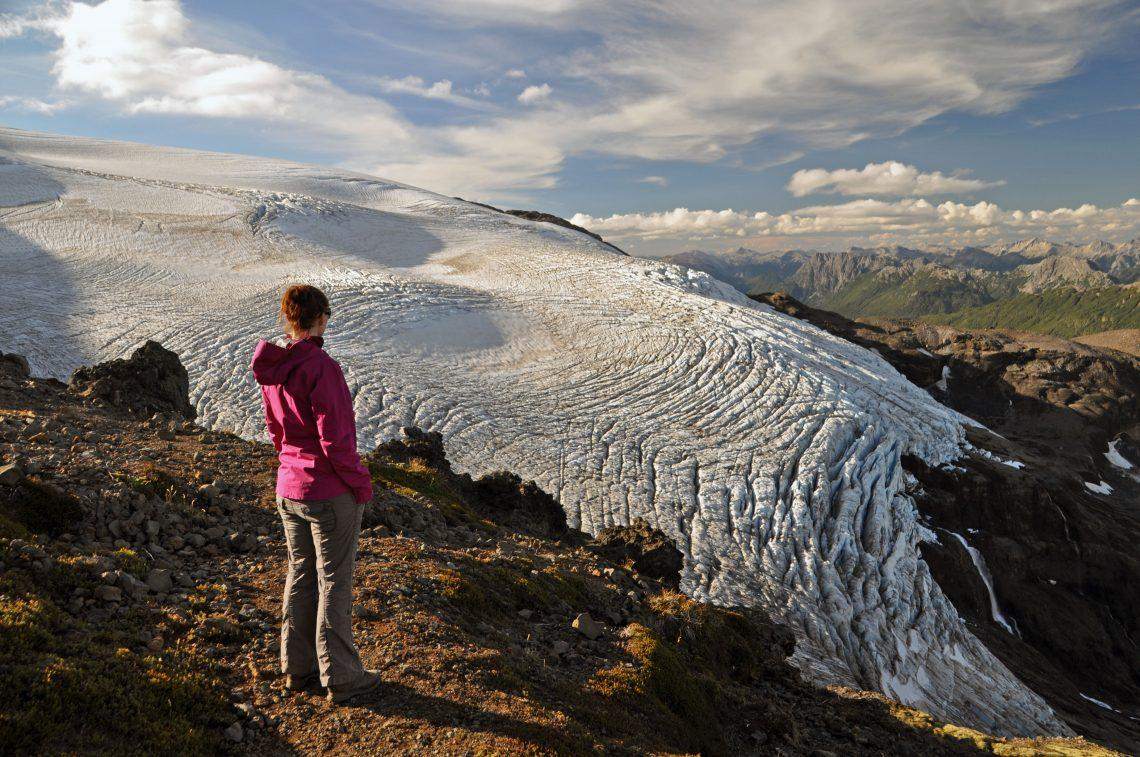 After getting a massive load of rain in Chile during the first week of our Patagonian roadtrip, the weather changed in our favor when driving over to Bariloche in Argentina’s Lake District. So the first thing we did upon arrival, was check the weather report for the days to come and pay a visit to Club Andino, who can provide you with any information you may need about hiking the mountains around this area. As the next day looked like the best one of the week to come, we decided to immediately leave for another cool adventure: hiking to Refugio Otto Meiling.

Of some places you will always remember how you got around to finding out about it, such as Cochamó in Chile. However, of many places I don’t even remember. When hearing and/or reading about a refugio up in the Andes, surrounded by glaciers and located just a couple of hours hiking from the city of Bariloche, I knew this was a must-do for us. So we started doing some research and with some help of people I know in Argentina, I found out that a bed in this hut can’t be booked and that basically everyone is welcome to stay. So off we were.

Hiking to Refugio Otto Meiling starts with a drive down to Pampa Linda, 90 km south of the city of Bariloche. If you don’t own a high clearance vehicle, don’t even attempt to drive there. The last 1.5 hours of the drive are along a single lane dirt road that is no joke for even the better cars. Our 2WD Mitsubushi Katana sometimes had difficulties beating the road.

The drive to Pampa Linda is just stunning, you can read all about it in one of our previous blogs. Upon arrival we registered with the Club Andino and after paying a short visit to “The Black Glacier”, it was time to head up into the mountains… 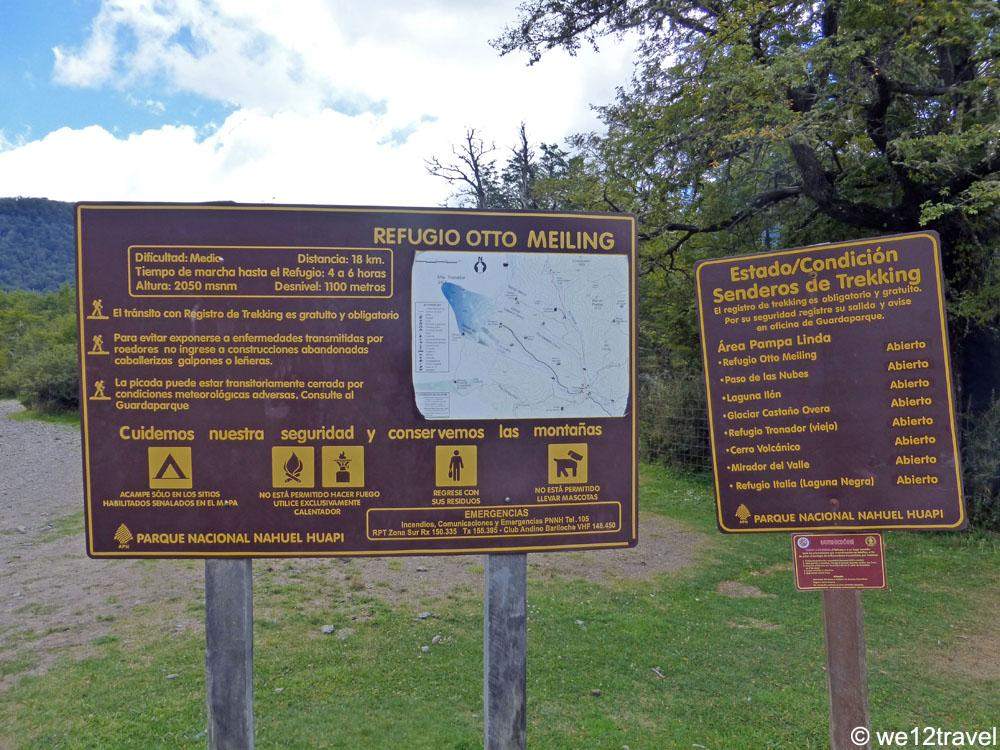 The first part of the trek was easy and somewhat boring. You basically walk through the pampa and the trail is rocky and flat. After about an hour you will reach the Rio Castaño Overa with two possible crossings and from there you will follow the horsetrack up into the mountains. At this section, the trail is surrounded by trees which was, when we were there, very pleasant as it was a pretty hot day. There are various shortcuts that will get you up much quicker, but at the time of our visit they were all fenced off. However a friend of mine hiked this trail more recent and told me that they have now reopened some of the shortcuts…

After steadily climbing through the forest for about an hour you will get the first views of the Castaño Overa Glacier and Cerro Tronador. Another 30 minutes after you will reach an open field and you’ve reached the treeline at 1.622 meters.  Here, you will get your first panoramic views of the area but it’s about another 300 meter altitude gain until you’ve reached the mountain hut. 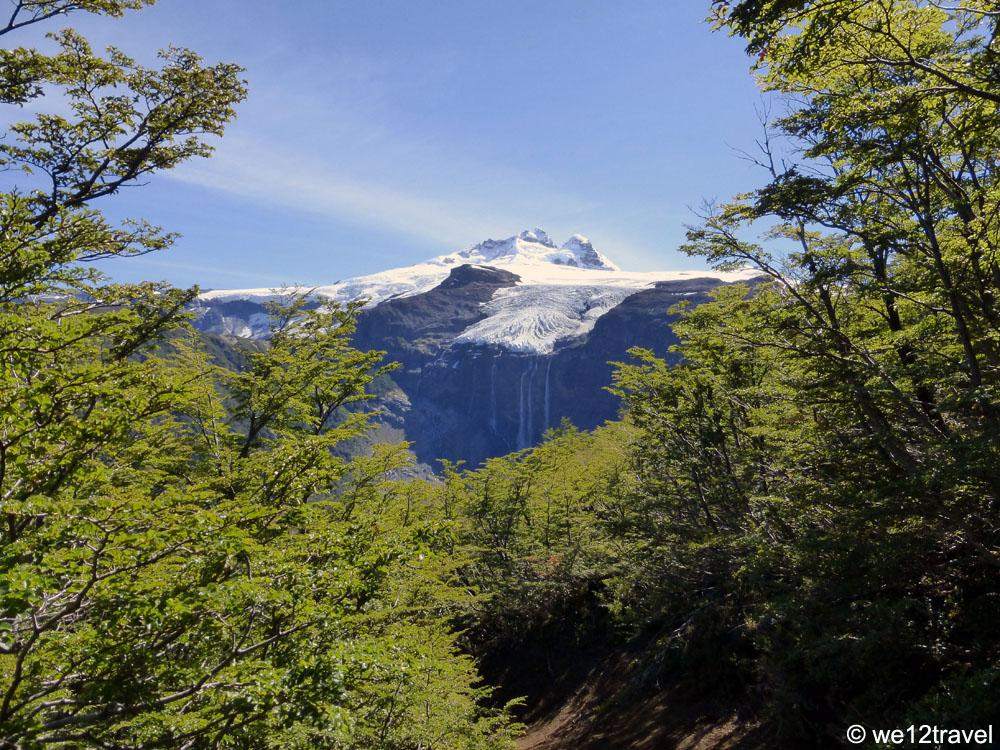 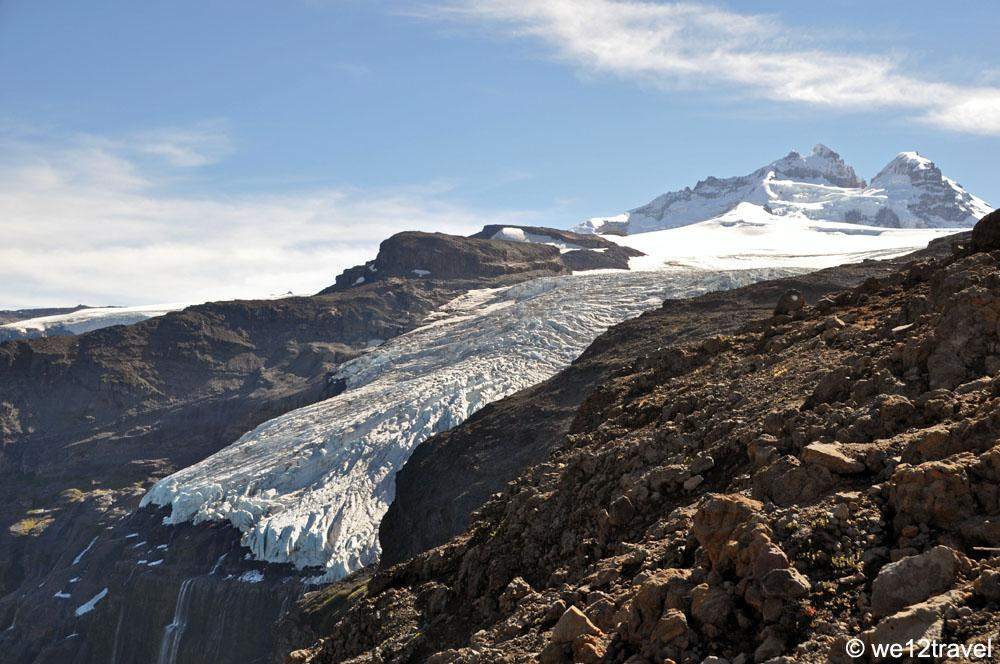 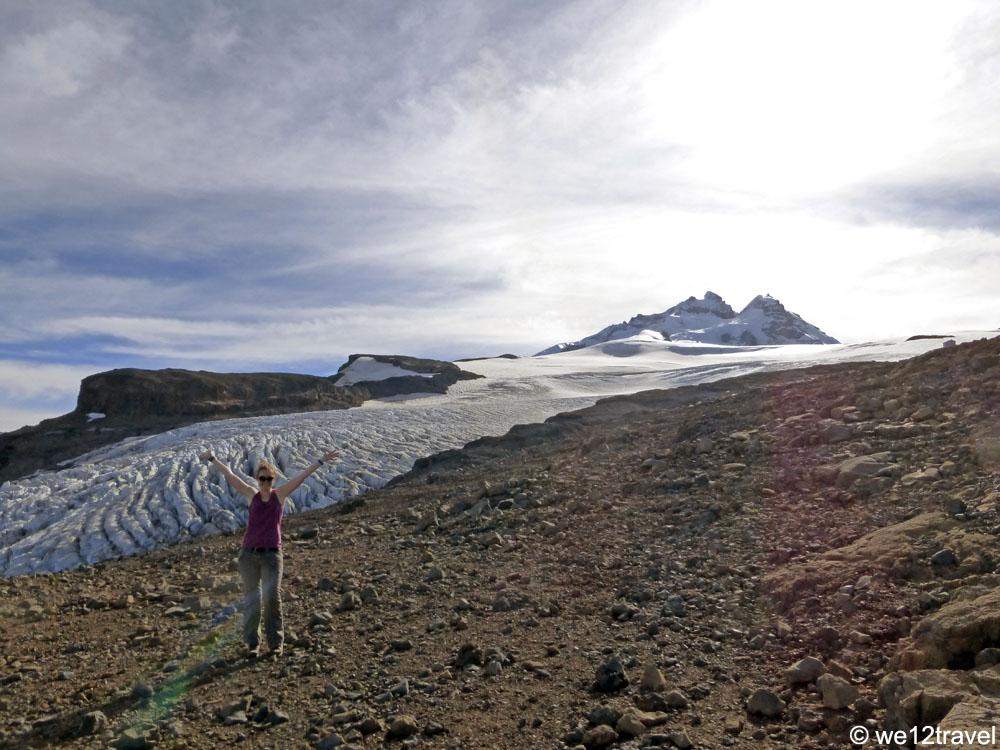 From here, the trail will get a bit more challenging however it never gets too exhausting. It will get rockier and you will have to make a couple of steps next to very steep drop offs, but nothing technical or something that you won’t be able to do (unless you are terribly afraid of heights). Depending on your physical shape, this part of the trail to the refugio will take you about one hour. Take your time because you are almost there and especially on a sunny day you will make plenty of stops for photos. 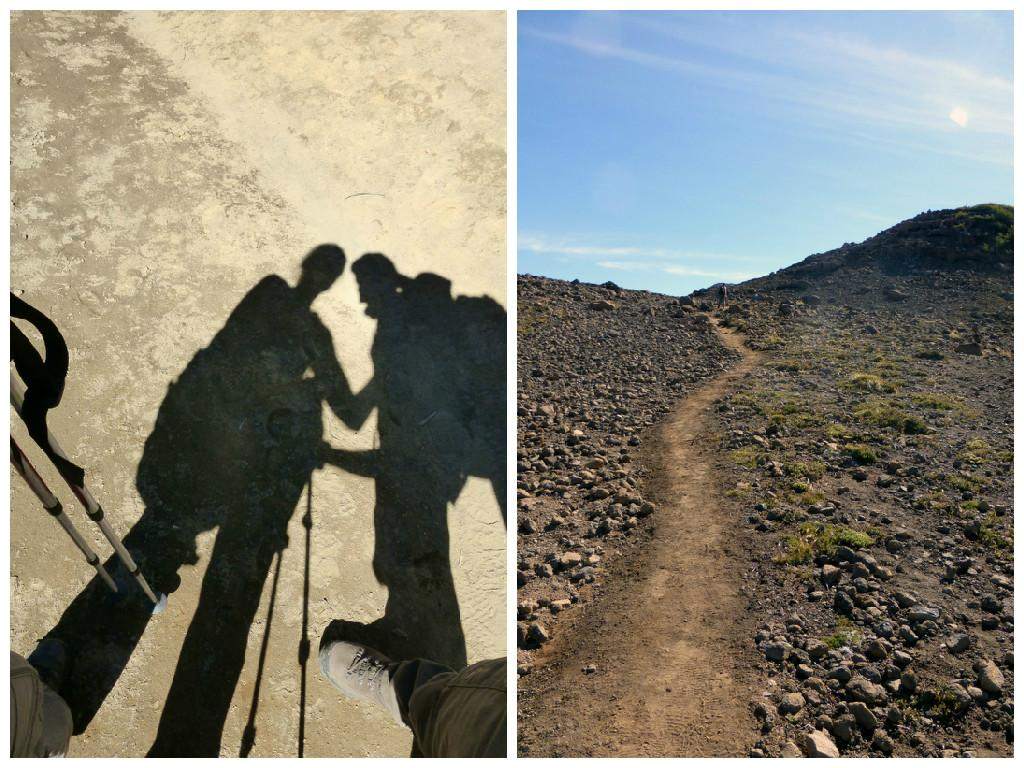 Finally, after about 4.5 hours of hiking, we reach Refugio Otto Meiling at an altitude of 1.922 meters. We check in, leave our bags at the entrance and explore the surroundings of the hut. To the left is the Alerce Glacier and to the right is Castaño Overa Glacier. The peaks of Cerro Tronador are towering down on us and basically… we are in paradise. I’ve never been in a mountain hut on such a beautiful location before… just see for yourself why. 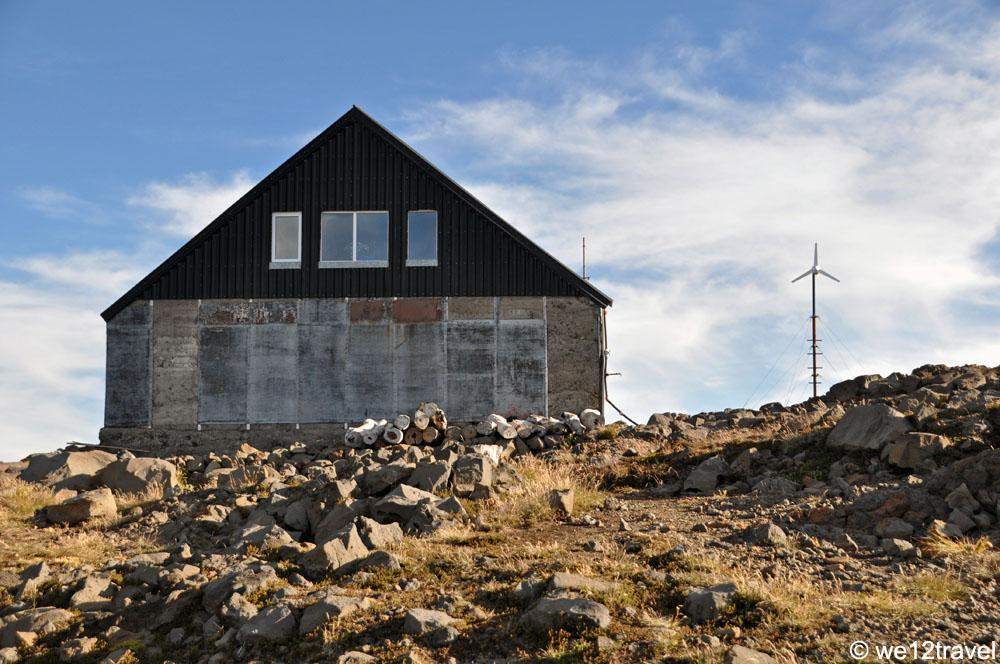 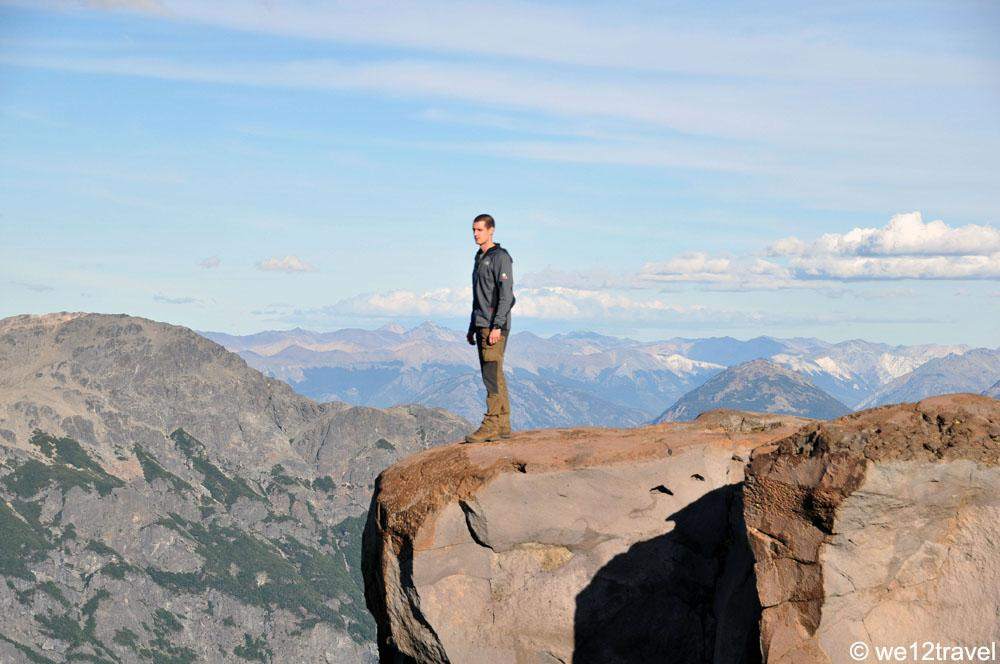 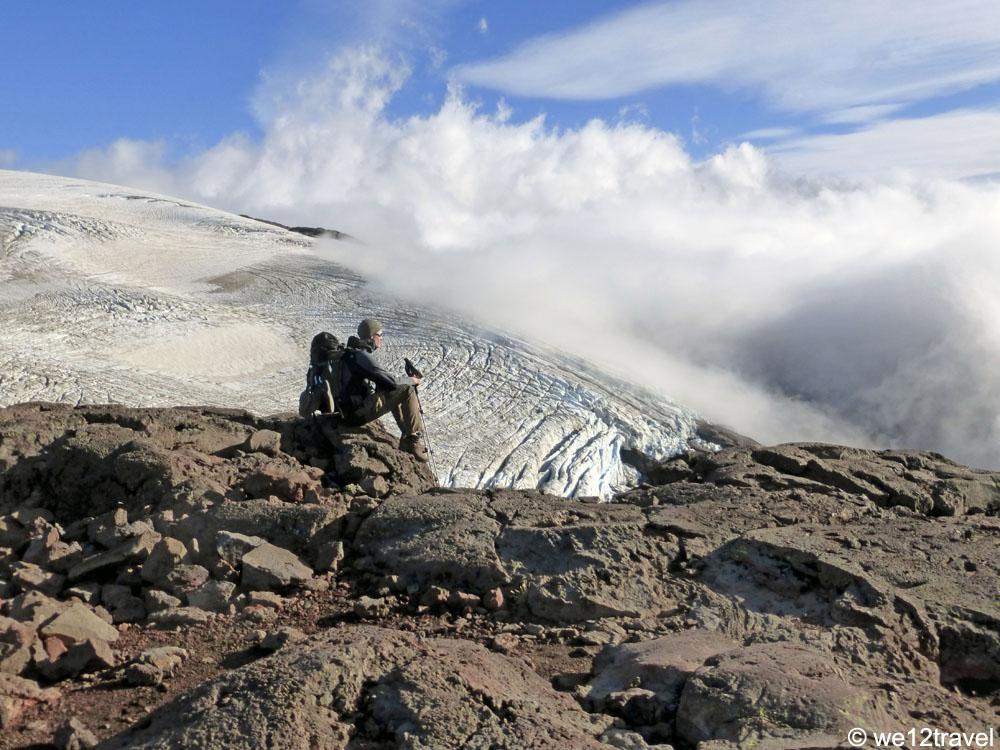 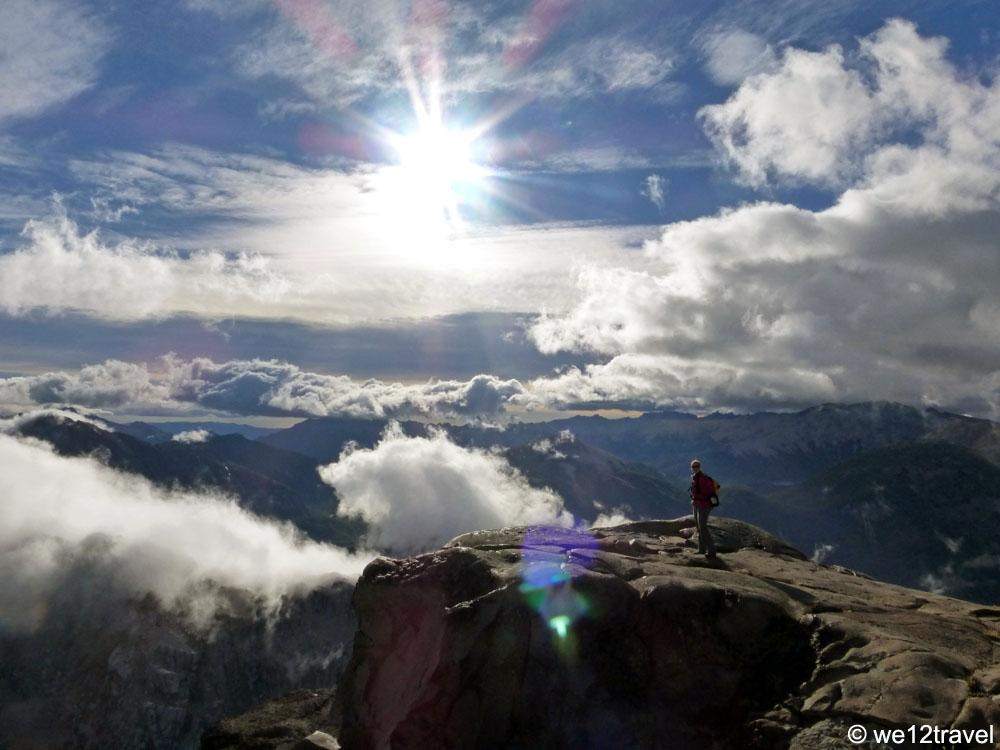 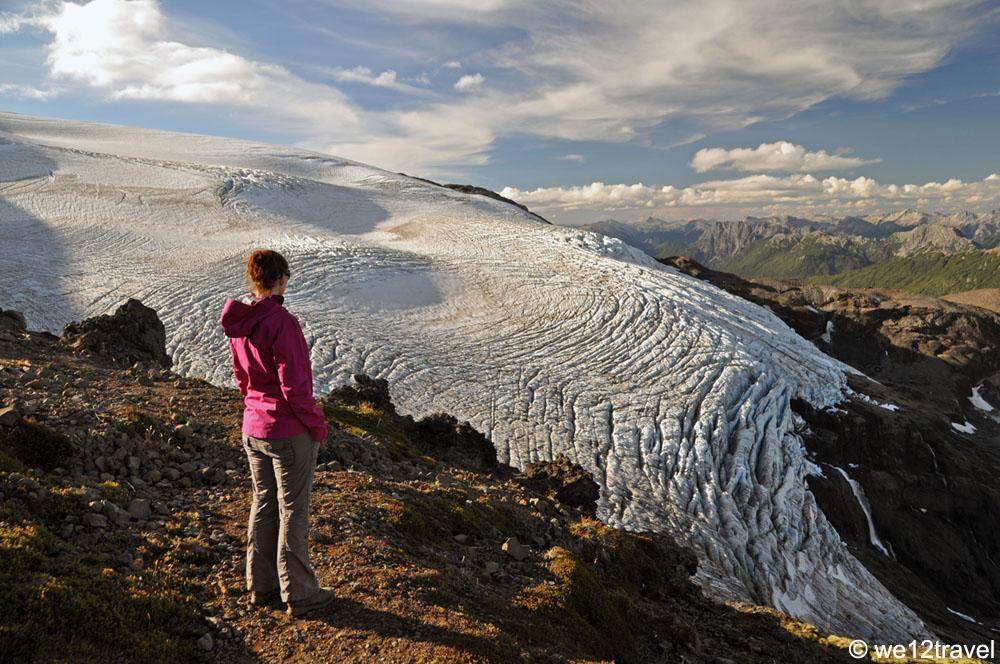 Before we know it, the sun is setting behind the peaks of Cerro Tronador. We decide to take a seat on some rocks, even though it’s getting pretty cold and chilly, and wait until the sun has disappeared behind the mountains. We head back to the hut for dinner and have some chats with fellow hikers. Then it’s time to go to bed: we grab a mattress and place it on the floor of the attic, next to all the others. It’s going to be a restless night with so many people in such a small space, but basically that doesn’t really matter since we’re super tired anyway… 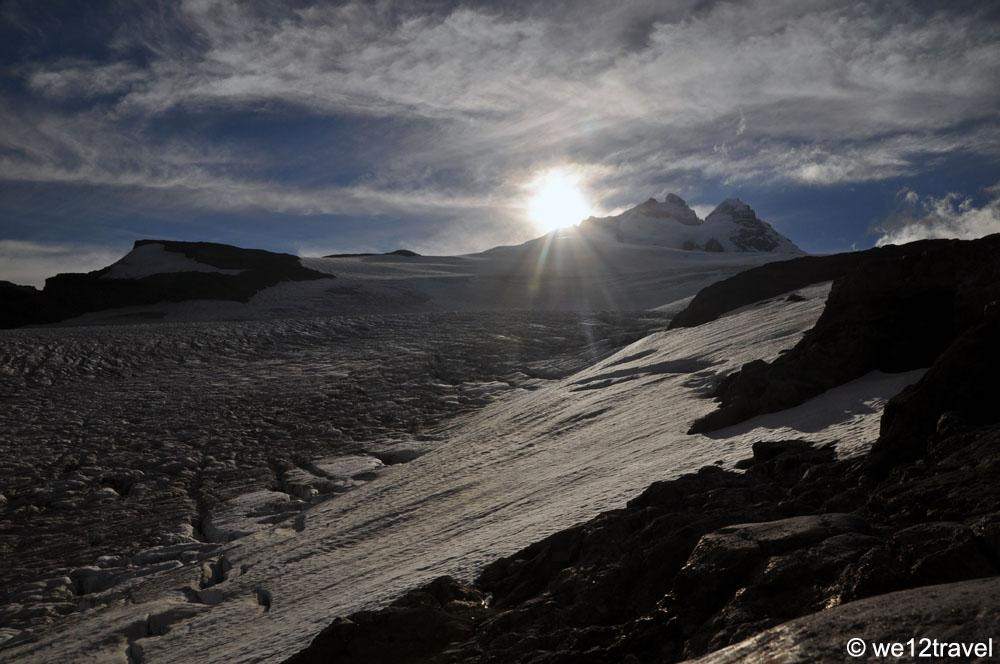 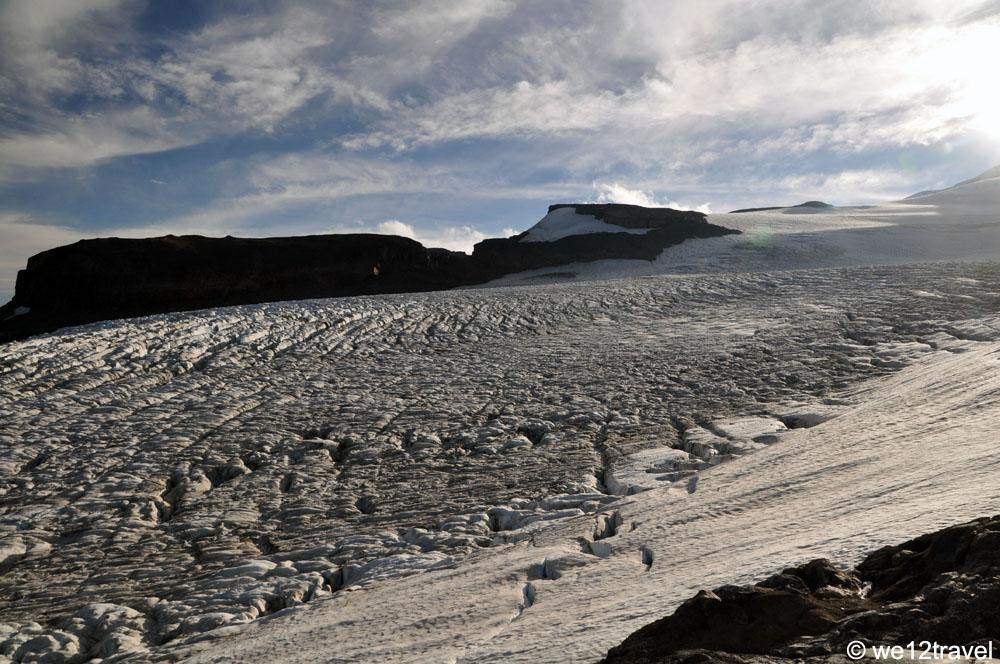 The next morning we wake up early because some climbers are already up. We get ready for breakfast and while it’s being prepared, I have a funny conversation with some of the folks working at the refugio. I hadn’t noticed the night before, but apparently everyone in the there thought I was someone famous … The conversation went something like this:

Apparently there had been a while discussion going on while we were out taking pictures but nobody dared to ask if it was me. All I could think was A) I wish I was Julianne Moore and B) how come they thought that, I personally never even considered the resemblance. I still don’t know the answer, but when I told some coworkers when I came back, they agreed with the mountain hut folks. Up until today, I still don’t see it but it was funny anyway…

After breakfast we headed back down to Pampa Linda. As usual, the way down is much faster than up so before we knew it (well OK, in about 3 hours) we made it back down to the car. By then, the clouds had arrived and we didn’t get to see Cerro Tronador anymore. Not a problem though, we had our slice of good luck already the day before … since the road only opened up in the afternoon we had some lunch, took a short walk and just hung out.

Practical information about hiking to and staying at Refugio Otto Meiling:

– The hut is pretty basic in general. Don’t expect mountain hut quality like you have seen in (for example) the Alps or Torres del Paine NP in Chile.
– Meals can be bought there, so bring cash because you are high up and there is no ATM. I didn’t write down the prices (bad blogger, sorry!) but it wasn’t very expensive…
– There are no beds or rooms, everyone sleeps up at the attic on a mattress. No privacy and lots of snoring people… bring earplugs if you think you won’t be able to sleep with people constantly walking around.
– You can rent a sleeping bag or bring your own. We took just our liners and used some of the blankets there, which proved to be warm enough so we didn’t need a sleeping bag.
– There are no showers or washrooms, just a toilet with a door that doesn’t close so prepare for primitivity and smells in the hallway … which is where everyone was brushing their teeth.
– In the morning over breakfast glacier guides will propose for those interested to take a glacier hike for a surcharge. They promise to get you back on time to at Pampa Linda to catch the bus back to Bariloche, however since the weather was pretty poor we decided not to join.
– At CAB we bought the Monte Tronador 1:50.000 hiking map but you don’t really need it. I’m just obsessed with maps and all so I kind of collect them… 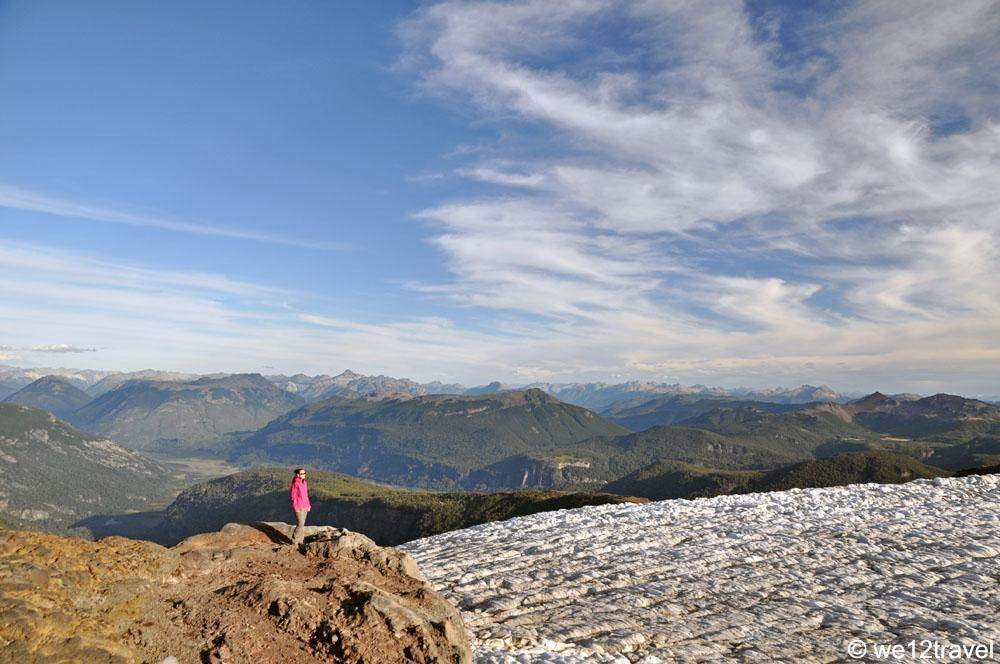 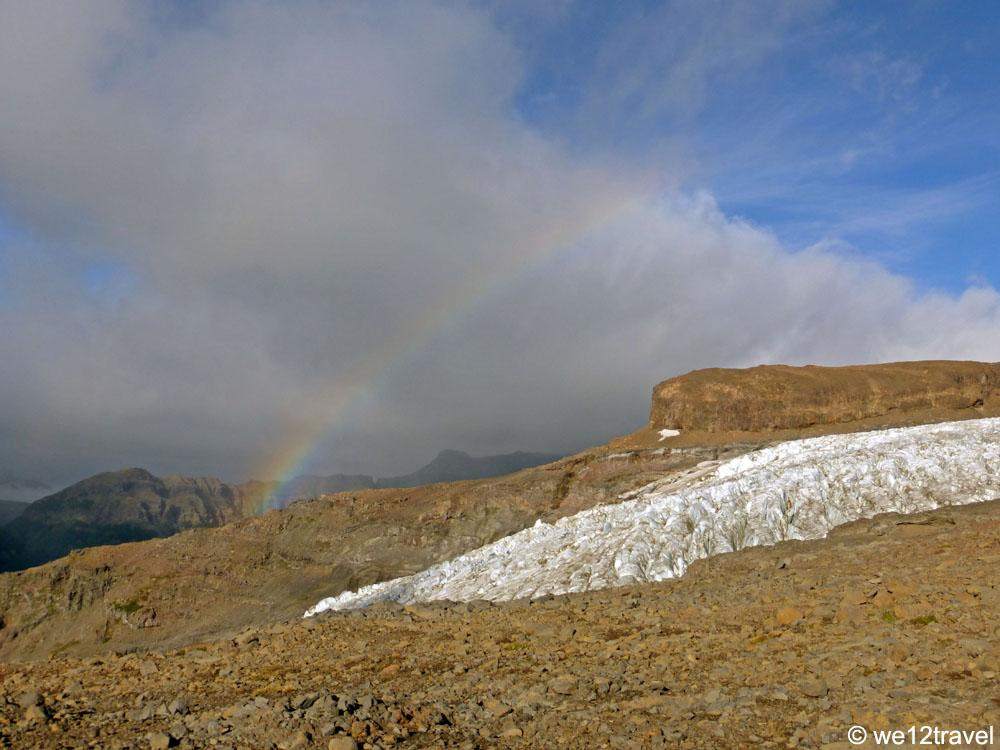 Looking back at it, this hiking trip was definitely one of the highlights of our most recent trip to Patagonia. Let’s just be honest – the weather also helped out a lot, but I guess that we could use some luck after being washed away with non-stop rain on an earlier hiking trip. Looking down at the hiking map while I was writing this post totally stirred my wanderlust for this region again … so many trails to be explored, so little time …

Want to read more? Maybe you’ll like these:
– Things to do in Torres del Paine National Park
– Mountain hut Do’s and Don’ts
– 5 Must-sees in Argentina