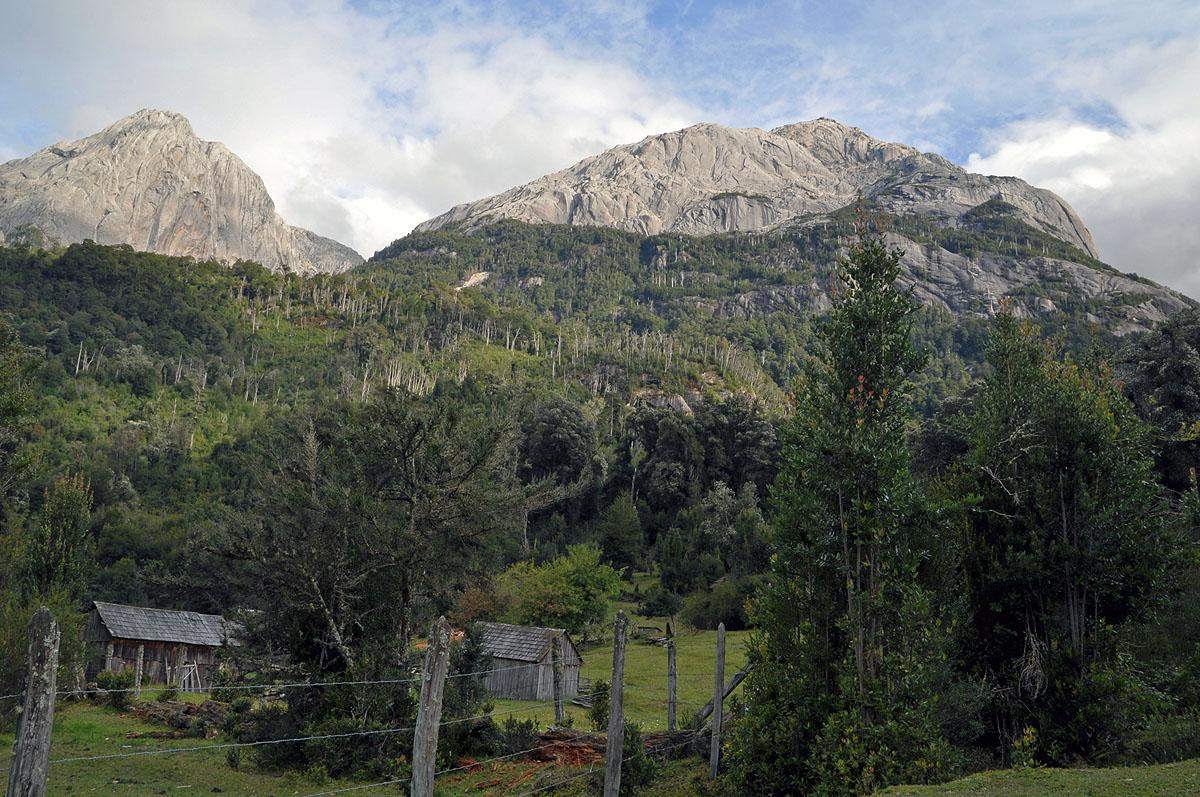 There are places you exactly remember how you got around to going there. Cochamó in Chile is one of those places. Martijn showed me something he had found on the American Alpine Club’s website. We stayed at one of their ranches earlier that summer (Grand Teton Climber’s Ranch) and we were looking for ideas for our next trip. So he came up with Cochamó. It’s also described as the Yosemite of Chile and a hiker’s and climber’s paradise. Since we already had planetickets to South America, it was an easy decision to head out over there.

After staying in Petrohue for the night, it was time to gather our stuff for a 3 day trip into the middle of nowhere. No wifi, no electricity and no cars. Bound to be fun! Our weather app showed that there was a decent chance of showers so we made sure we packed all of our stuff double weather proof.

The drive down to Cochamó was just gorgeous, I don’t think we’ve ever seen such a green landscape before. Upon arrival at the registration point, we parked our truck and took out our stuff. The guy at the register told us that it would probably be raining for the rest of the day and that there were plenty of other hikers on the trail. And that the trail would be very muddy, but we already read that on the website of the refugio, so we came prepared with our gaiters. How muddy it was going to be, we were about to experience. 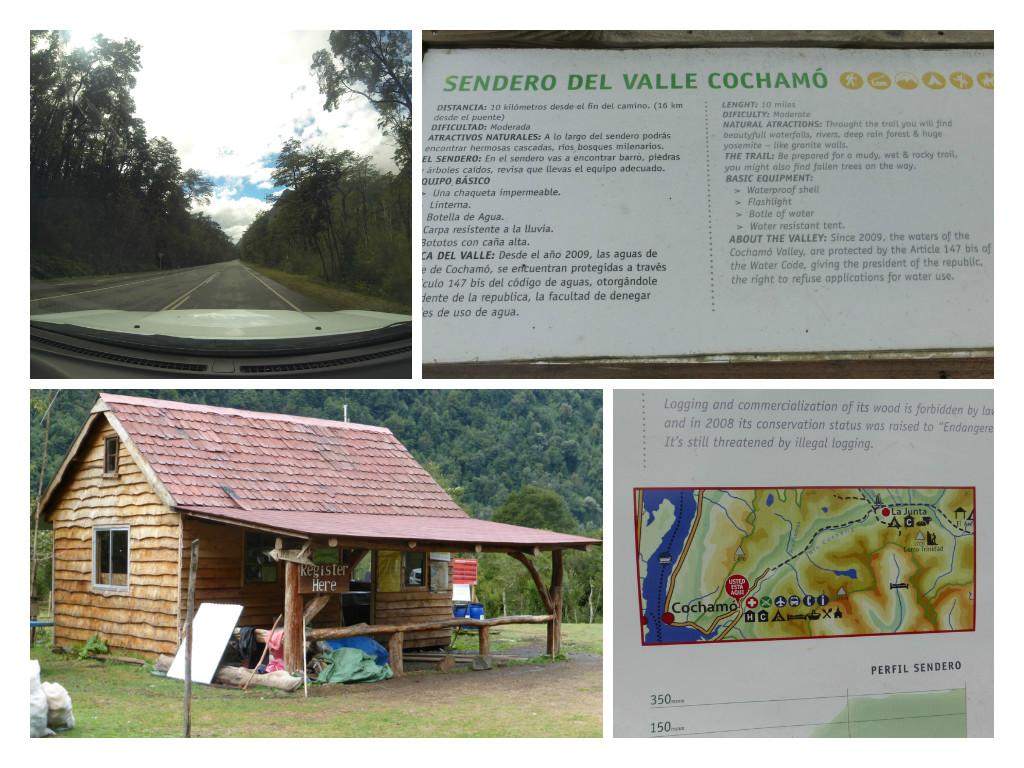 After finalizing the registration and chatting a bit about the future of this valley, it was time to get going. After crossing a small bridge and closing the gates of “El Morro”, you are officially on the trail. Being “on the trail” always makes me feel excited, like there is finally something happening. Strange I know, but venturing out on a new adventure always starts with being “on the trail.”

The trail leading to La Junta was carved about 150 years ago by the gauchos that carried cattle from the Argentina farms to the Chilean coast. Nowadays you can opt to hike in but you can also get to the valley on a horseback. According to the website, it was about 4-6 hours (10 km) moderate hike, but we were warned that weather conditions can make it much longer.

The first part of the trail was easy. Just through some meadows, slightly uphill and crossing a few small streams. Eventually we reached the La Piedra River, which we heard couldn’t be crossed by rockhopping as the waterlevel was too high. Luckily they made a logbridge, but be careful, it’s extremely slippery when it’s raining, believe me. On the way back, we actually found the hanging bridge as described on the Cochamó website, which is way more fun to cross, at least if you like moving above a rushing river… 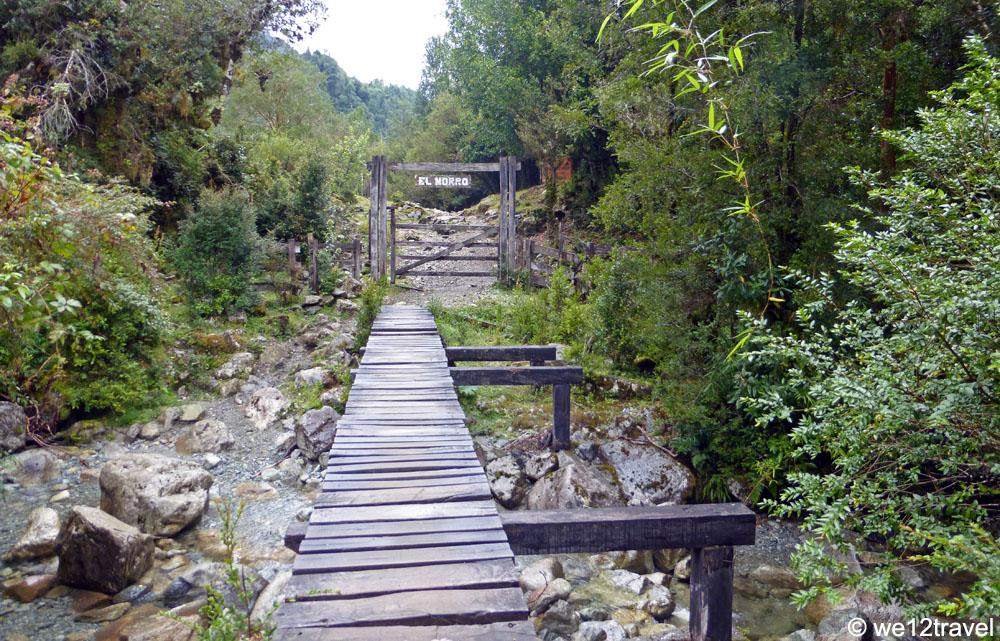 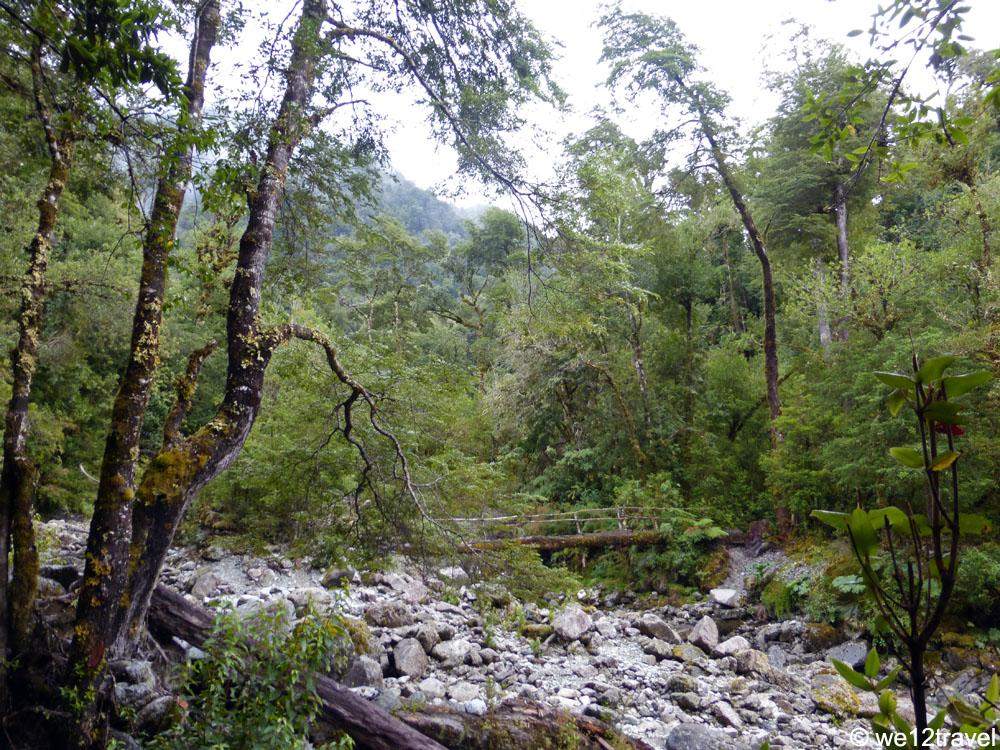 From here the trail became a bit more demanding, just up, up, up for quite some time. Way down in the valley the Rio Cochamó is thundering and winding. From here, the real adventure starts and you will walk through the trenches and mud pools. There is a main trail for the horses but this is usually in poor shape and most of the time there’s a better trail just beside it or a bit further uphill. Usually they connect again at some point, however it may take a while. At some point Martijn was in a conversation with a Swedish guy who caught up with us and somehow we got separated when I figured I’d go left when they went right and it took me about fifteen minutes to find them back.  Other than being muddy, the trail is green. Green, like we had seldom seen before. 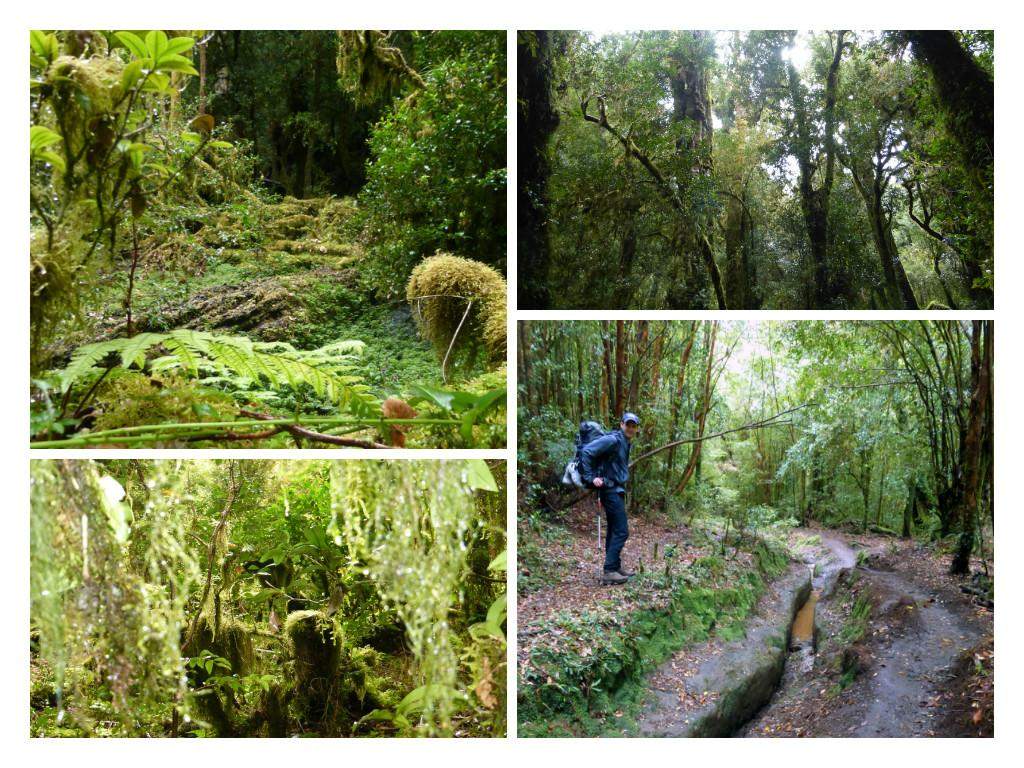 After a good 4 hours and lots of slipping and making sure to not fall face down in the mud, we made it up to the pampas of La Junta. From here, it seemed to have cleared up a bit and we got the first sights of the magnificent granite domes the Cochamó valley is famous for. What can I say, it was just stunning. All we could say while raising our eyes towards the sky, was WOW!

The best thing of the hike was yet to come, which is crossing the river by a pulley system. It’s a very rudimentary system, but it works just fine. OK, I had a bit of a hard time pulling Martijn across the river but we made it. Finally there! If only all other river crossings would be this much fun…

After taking some pictures we made our way to the refugio where we received a warm welcome and were greeted by “Ah hello, you are the Dutch couple!” We were shown our room and pretty surprised we had our own room, with a made up bed. Such a luxury in a place that is best described as a mountain hut. 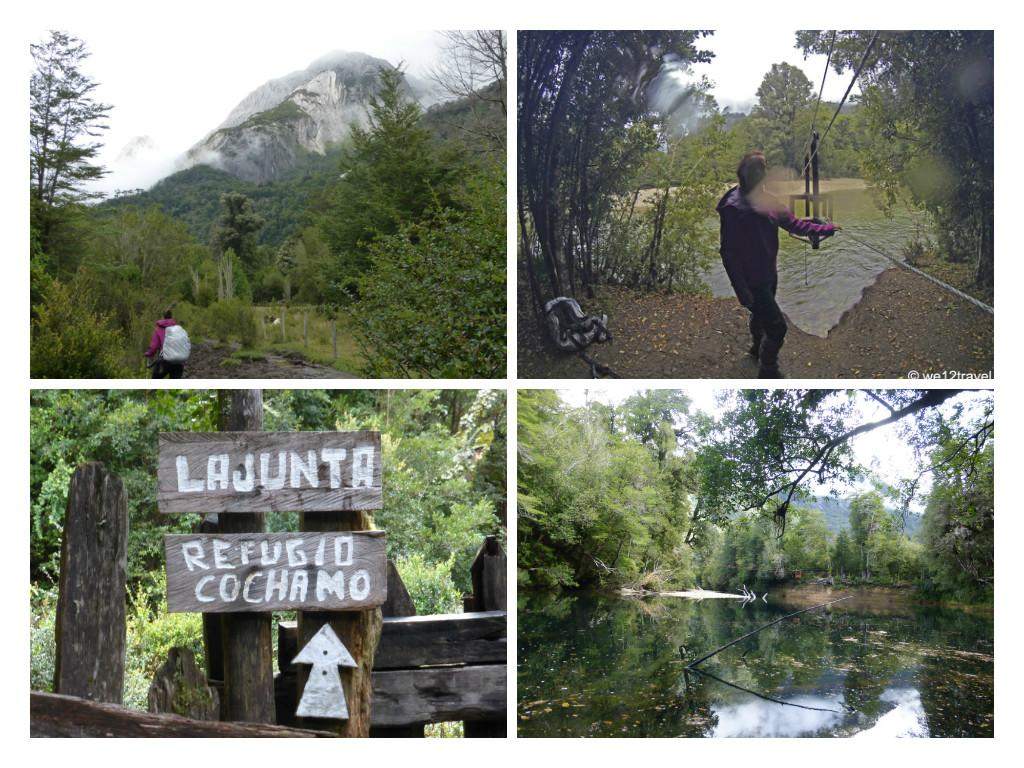 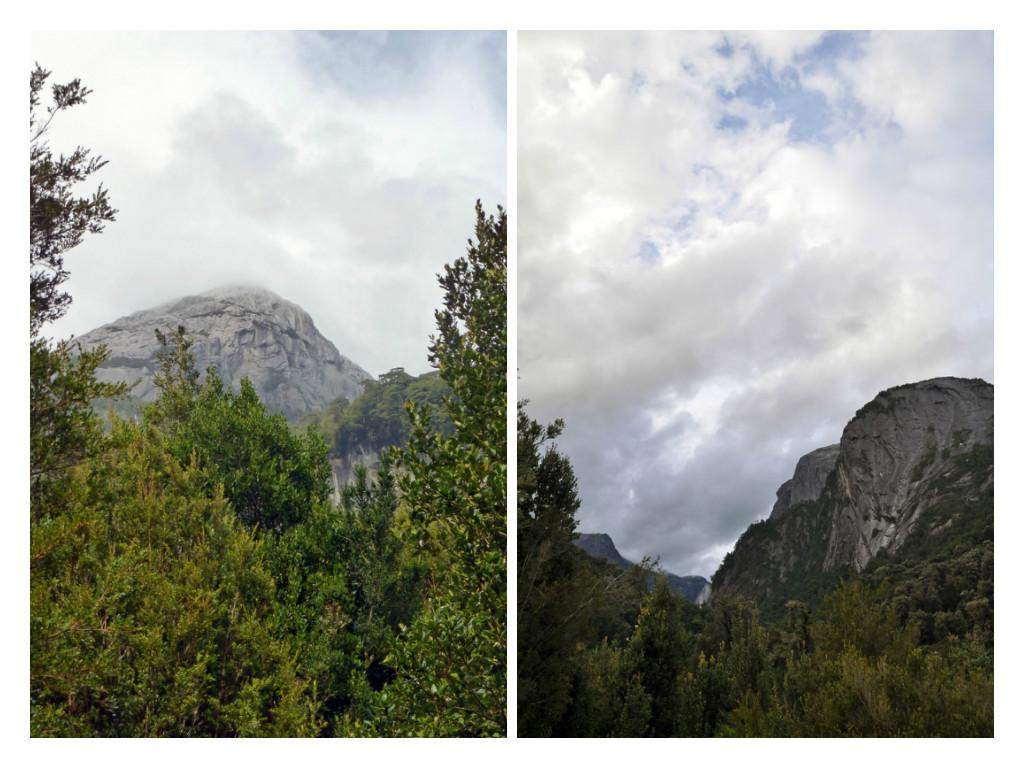 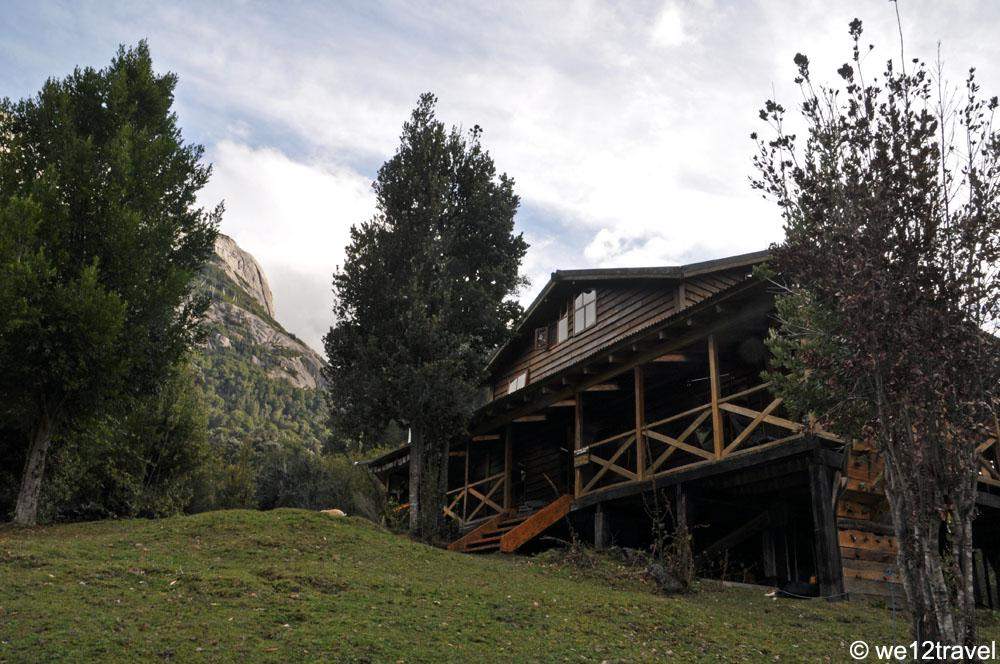 The rest of the afternoon we spent around the hut, taking pictures, figuring out which hike we were going to make the day after and drying our wet stuff. Just before dinner, it started raining again and someone told us it wouldn’t stop for the upcoming days. Just great. After dinner,  we had some drinks, played cards and then went to bed. The whole hut went silent and all we could hear, was the rain ticking on the window. All we could do, was hope it would be dry the next morning again…

The next morning it wasn’t dry, of course. It was wet. As wet as we have ever seen. Pools of water had formed around the refugio and the big, fat drops were still coming down. One giant downpour. We decided to take it slowly in the morning. While everyone was gathering for breakfast, we all realized it might just be one of those days. While stepping outside, we immediately noticed a change in the landscape. The day before the clouds had been up high, still showing some of the famous domes, but today, the clouds had come down until they almost reached the ground and hiding all the things this valley is famous for. Not only was it wet but also cold, incredibly cold. After taking a glance at the weather from underneath the porch, I quickly decided to get inside again and wait for a gap in the showers to head out.

Every now and and then, a visitor from the campsite came in. Telling us about the increased water levels and that it was just one big wetland. How all of their stuff had gotten soaked and they were seeking warmth and a dry place. We got into a conversation with some Brazilian and Spanish climbers who had arrived the same day as us. According to them, the weather was not about to change anytime soon, it would only become worse. By the end of the day, they decided to head back to the village the next morning and catch a ride to Argentina, as they were hoping for better weather at the other side of the Andes.  Sitting around and waiting for the weather to clear up, wasn’t an option for them.

So, what did we do? Well, we just stayed inside all day. Realizing that hiking wouldn’t get us anywhere in this rain. That it would be dangerous to cross streams that had changed into gushing rivers. That getting out on the rocks would not be safe because they were incredibly slippery. Each time we were ready to step outside, another giant downpour started, keeping us inside. So we did something we never imagined we’d be doing: we decided to not hike out. Stay inside the hut, chat to other hikers and climbers, play cards and read our books. Not your typical day for us but there just seemed no other option, also keeping in mind the next day we had to get back to town again to pick up our car. We were in one of the most awesome places of Chile and we were stuck in a refugio, hidden under a thick pack of clouds, disguising some true natural beauty. 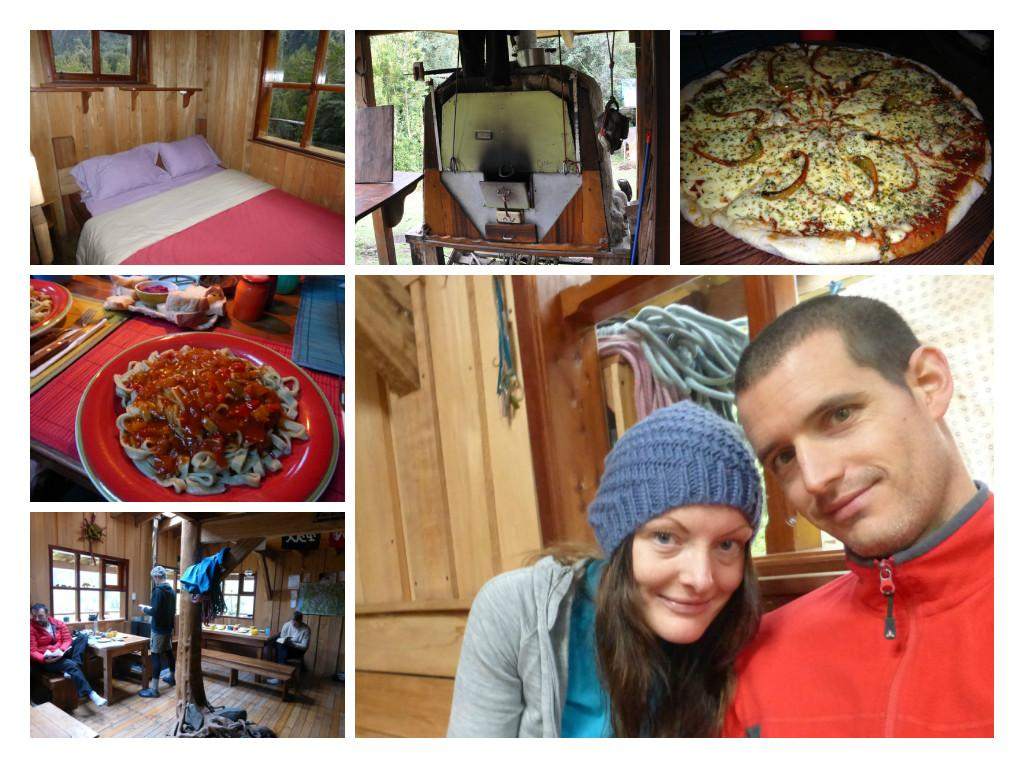 Dinner in the hut is just awesome. Before arrival you have to decide what you want to eat while staying and we heard that their pizza’s are legendary. So we decided to have the regular meal one night and the pizza the other night.

That night, we got our legendary pizzas. Pizzas yes, because even though they are large, Martijn thought he could eat one all by himself, just like that. Meaning I also had to get my own as I totally believed he could eat it all. And he did. I didn’t though, yet we ate a lot. After finishing his, he finished mine. Man, he can eat… in fact, we both can…

The next morning we packed up and headed back out again. Needless to say that the trail had become one giant mudslide. We’d be in the mud knee deep while stepping through the trenches and the rivers had indeed risen significantly. It was quite an adventure to make it back to the car, but eventually we were happy to reach El Morro just past noon. We greeted the same guy at the registration and packed up. He asked us how we liked it and our honest answer was that even though we knew we were bound to have a lot of rain, we hoped we could have just hiked out. And that it had been one big adventure, despite the weather being poor.

Are we sad that we didn’t get to climb the domes? Sure, but as with any trip you make, there are good days and bad days. Traveling and hiking in the mountains for years, has taught us to always take into consideration that you won’t be able to do at least some of the things you planned because the weather just doesn’t cooperate. It’s just a shame that it had to be this, one of the things that would have had to be one of the highlights of our trip. On the other side, it’s a good reason to go back one day. Because I’m sure we will be back. It might not be anytime soon, because it’s still pretty much the other end of the world. I just hope that it will still be the relatively quiet and hidden place it was right now…

As for the climbers, they made the right decision to leave. When we crossed the Andes into Argentina two days later, the sun was shining. We knew they’d be out there on the ropes and at least we didn’t have to feel bad for them anymore. You know how that goes in the outdoor world…

Want to read more about our Patagonia roadtrip? Click here to go to all previous stories.