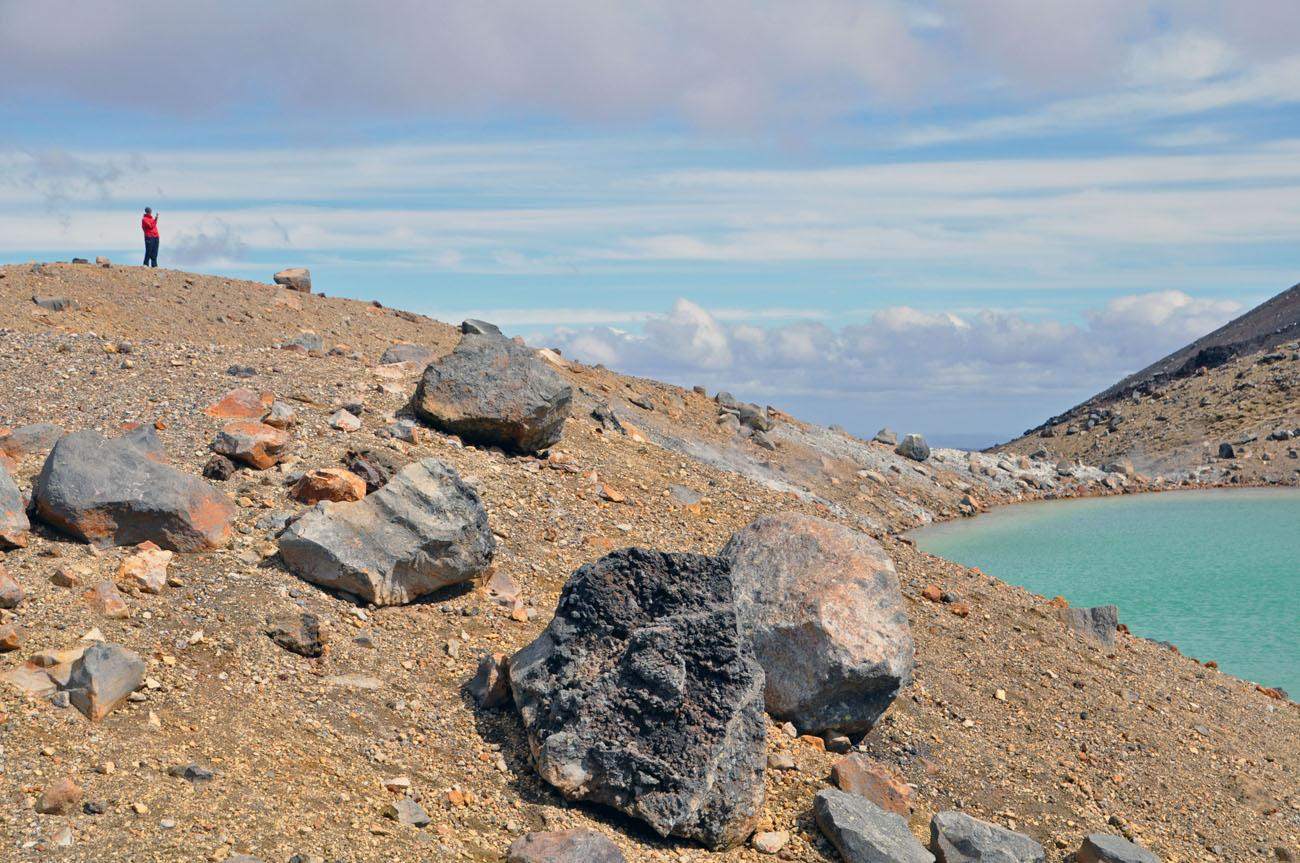 An introduction the the Tongariro Northern Circuit

When planning our stay in Tongariro National Park, we were extremely thrilled to find out there’s a four day tramping track which is called the Tongariro Northern Circuit. While on this track, you will of course do the famous Tongariro Alpine Crossing but luckily, the Tongariro Northern Circuit goes much further than that. It leads you to places no other tourists will go to. As you may have read in our post about Tongariro National Park, we had to reschedule the planned hikes because of the extreme winds. Eventually we chose to do the walk in the counter direction, luckily all huts had availability for rebooking our trip and the staff at the DOC office in Whakapapa Village helped us with that. This turned out to be a great decision as we didn’t have to follow the crowds doing the Alpine Crossing on day two. Here’s our experience of the hike: 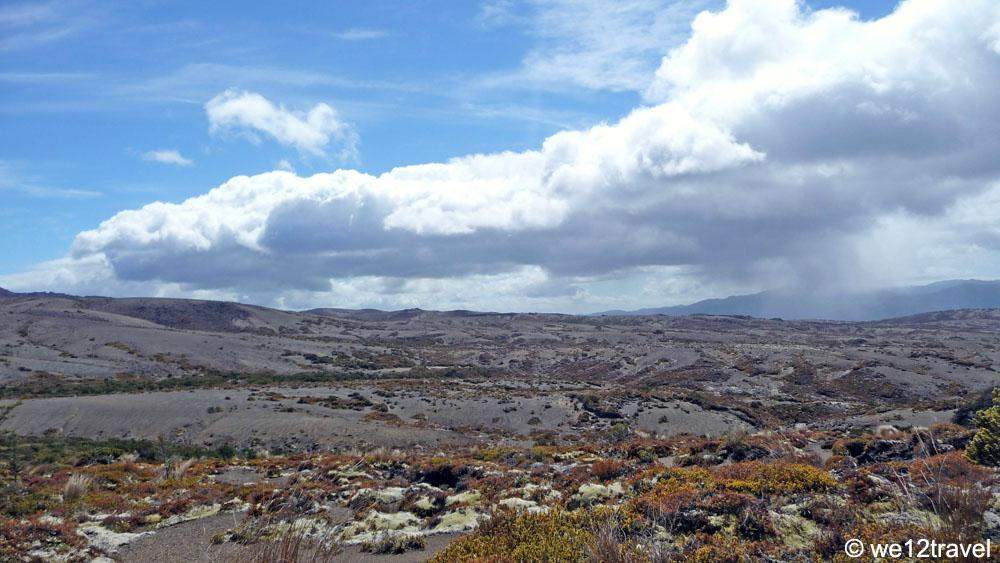 We remember this walk as desolate. It’s a walk through a wide valley between the mountains so it was quite windy. The sky was dark and that made for an eerie track as well. It seemed to be just us on the track, we didn’t see a lot of other trampers. Mount Ngauruhoe (which featured as Mount Doom in Lord of the Rings) was within sight most of the time, as well as the major Mount Ruapehu. This part of the Tongariro Northern Circuit is relatively easy and you should definitely take time to make the side trips to the Taranaki Falls and Tama Lakes. Those latter ones are explosion craters that make up for a spectacular landscape. As the wind was blowing too hard, we decided not to climb the ridge to upper Tama Lake (and it’s a 1.5 hr return track) but Lower Tama was well worth it. That night we stayed at Waihohonu Hut, one of the most beautiful and modern huts we stayed at. This night on the Tongariro Northern Circuit was our first night on a multi-day trek in New Zealand which made it extra special! 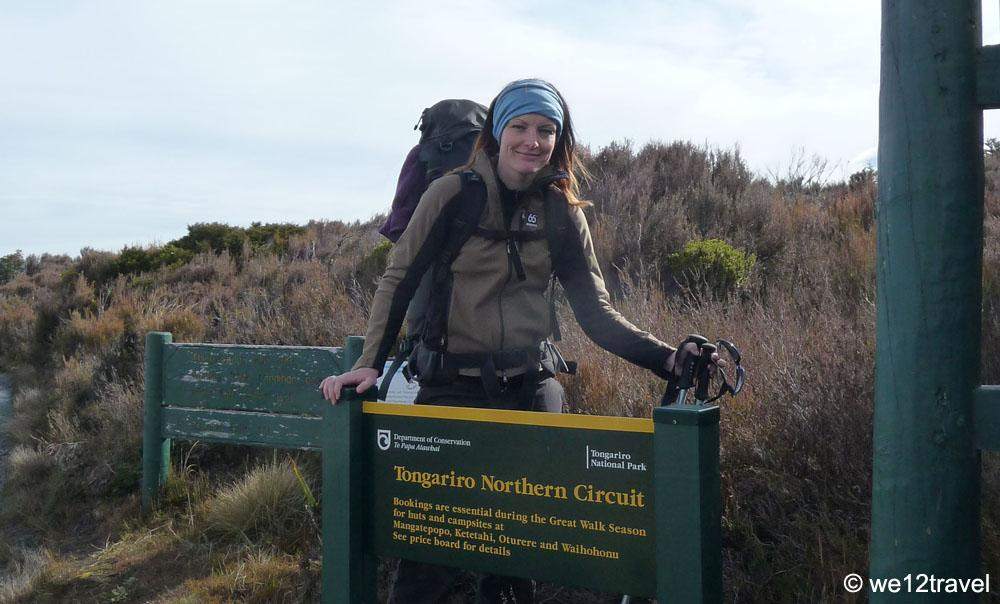 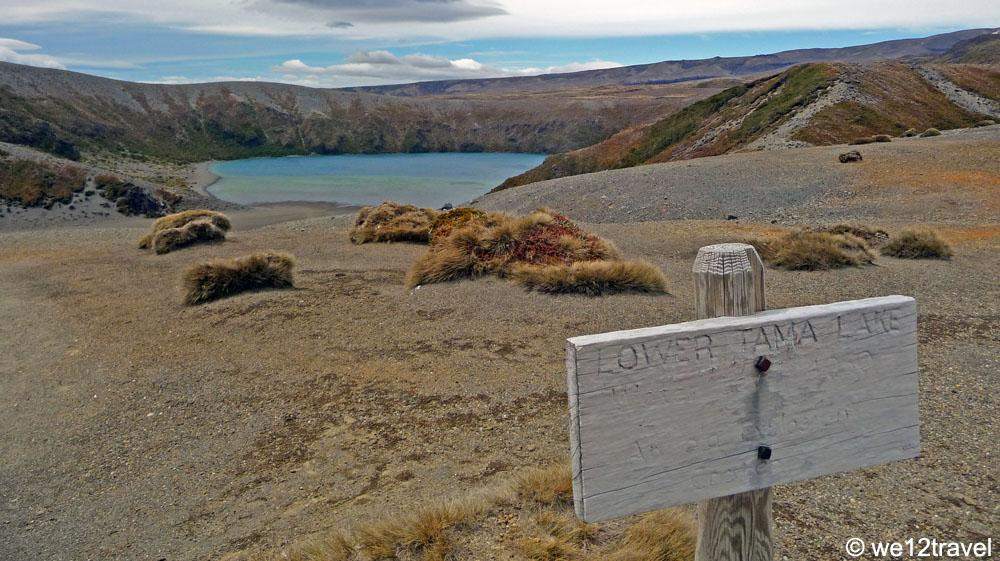 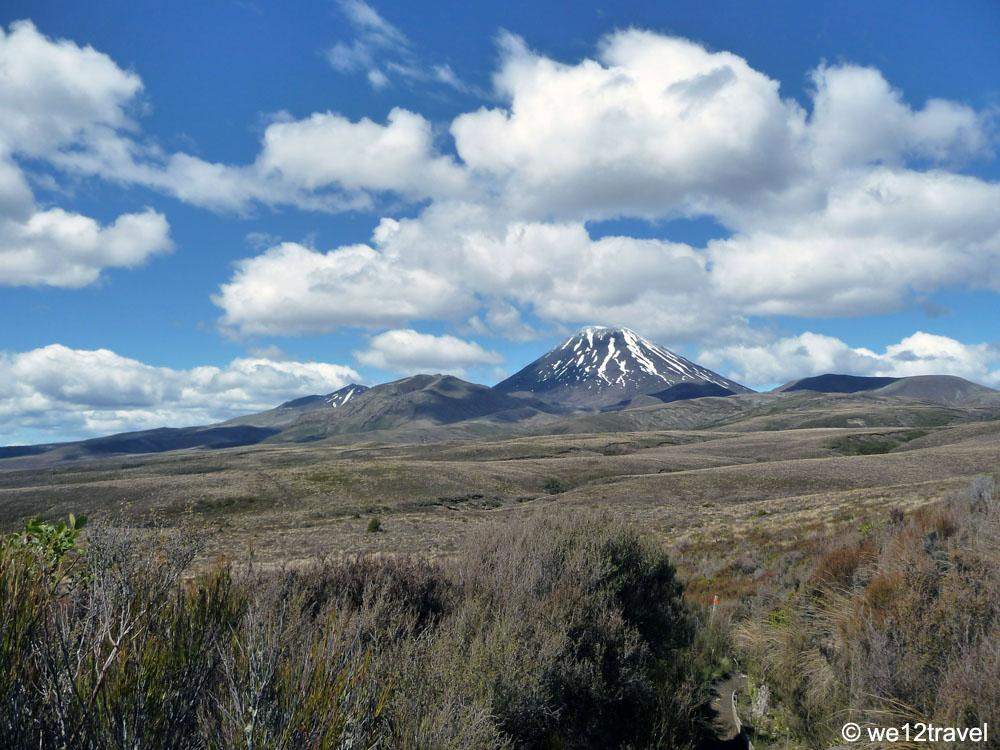 This day we copied from “Lonely Planet – tramping New Zealand”, but on the DOC website it’s described differently, however this was the hike of our choice In the morning it was pretty much a clear sky yet very windy and we decided to make a 20 minute walk to Ohinepango Springs, at the edge of the Rangipo Desert. This desert is know as where parts of the Black Gate of Mordor from LOTR were filmed. After picking up our packs back at the hut, we decided to head to Oututere Hut, our half way point. Here we would decide if the wind would allow us to continue onto the ridge of the Tongariro Alpine Crossing. The first part of the hike was easy and led us through a forest. After Oututere Hut things got quite rough. The wind was blowing like crazy and at one time we regretted going up, although going back down would mean the end of our dream to do Tongariro Northern Circuit as we wouldn’t have enough time to still hike all the way tomorrow. We decided to continue and were rewarded with the most lonely views of the famous Emerald Lakes upon reaching the ridge. No other tourists there, just us and a lot of pure beauty. Being inside Central Crater all on our own was magic. After crossing some snowfields we descended to Ketetahi Hut for the night. Here we met some hikers who had dared to get up to Red Crater (from the Alpine Crossing) and nearly got blown away. One of the girls told us they had been crawling and thought they were going to die… Ketetahi Hut is the one hut on the Tongariro Northern Circuit with the best views, if it’s clear you can see Lake Taupo in the distance. It’s also very cosy as you sleep, eat and cook in the same space, we made some great friends this evening! 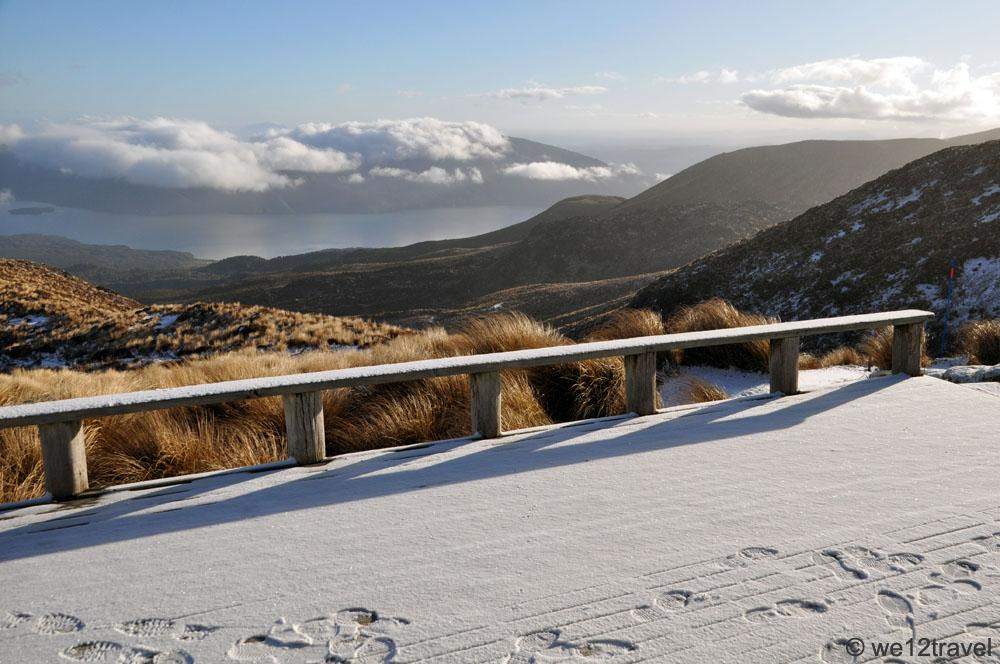 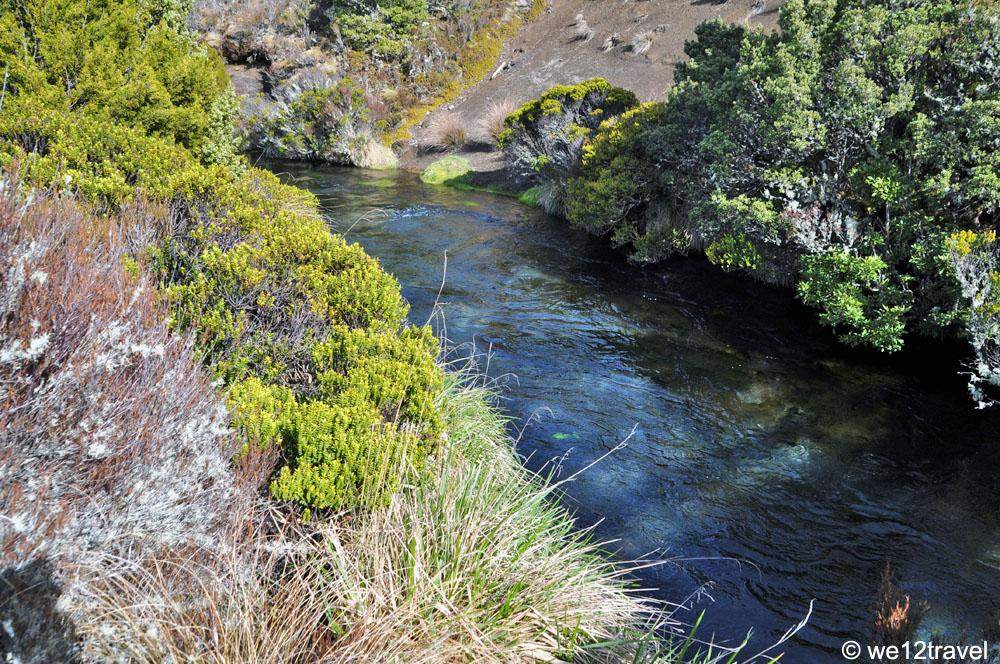 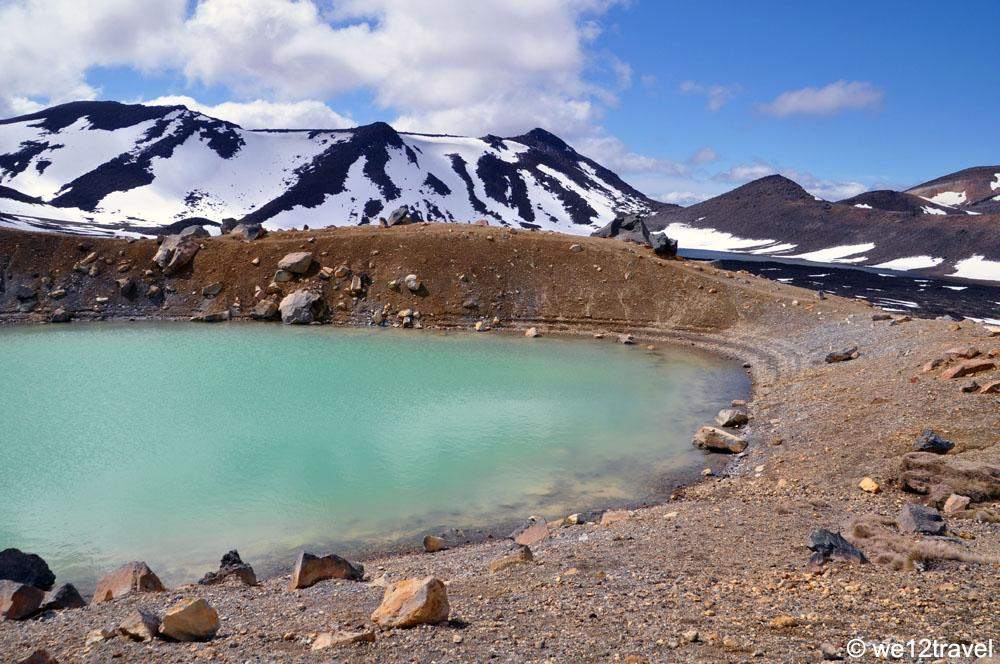 This part of the Tongariro Northern Circuit is the actual Tongariro Alpine Crossing, but in reverse. We got up early and were amazed to find… snow! As in all around us! A thin layer had fallen during the night and made the landscape even more special. After a two hour hike back up, we reached Central Crater again, now with much more people. The ascend up to Red Crater took a while, as the path is just loose scree and every two steps up makes you slide one down again. When reaching the highest point we noticed hundreds of walkers coming up (yikes!), so it was about time to get down and get away from the crowds again. But not without looking back once more with Emerald Lakes from high above this time… The way down wasn’t too hard, just lots of steps. We stayed at Mangatepopo Hut, not the prettiest hut but well known for its stunning sunsets. Martijn decided to push on to Whakapapa to pick up the car and drive it to the car park so we could head out early the next morning. An excellent idea as this part of the trail proved to be quite boring. 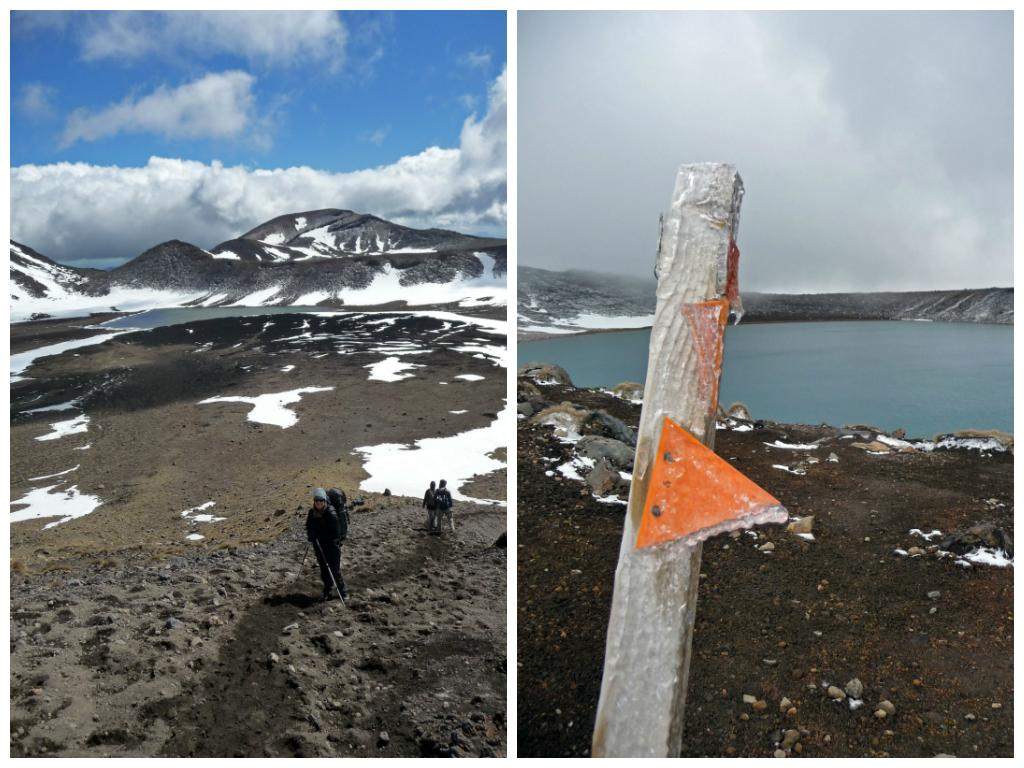 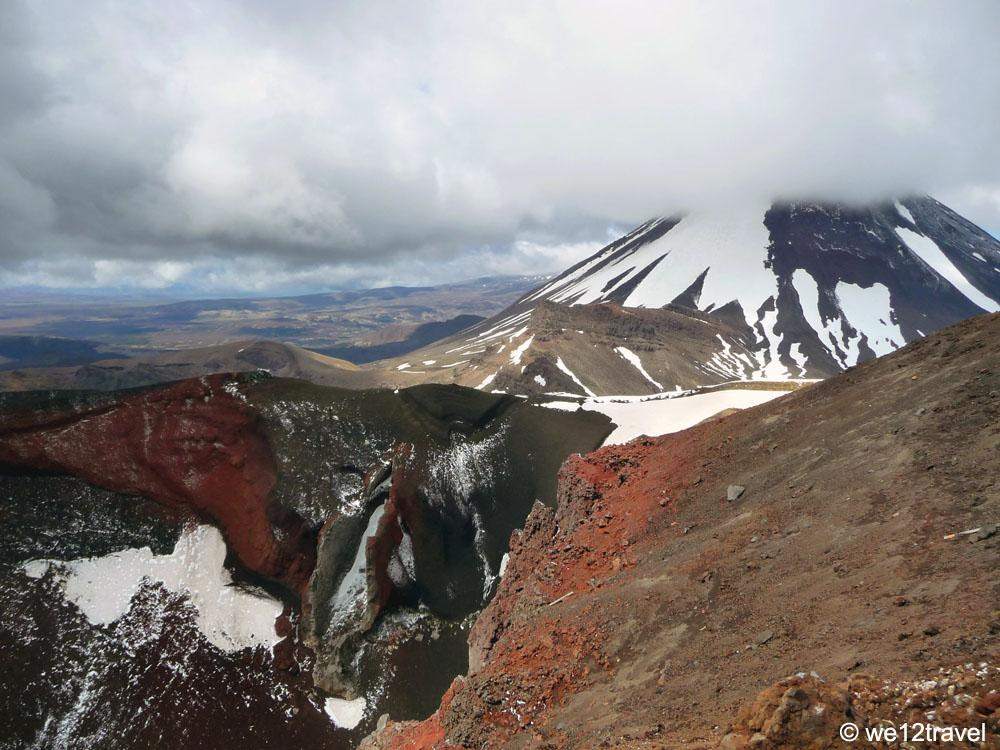 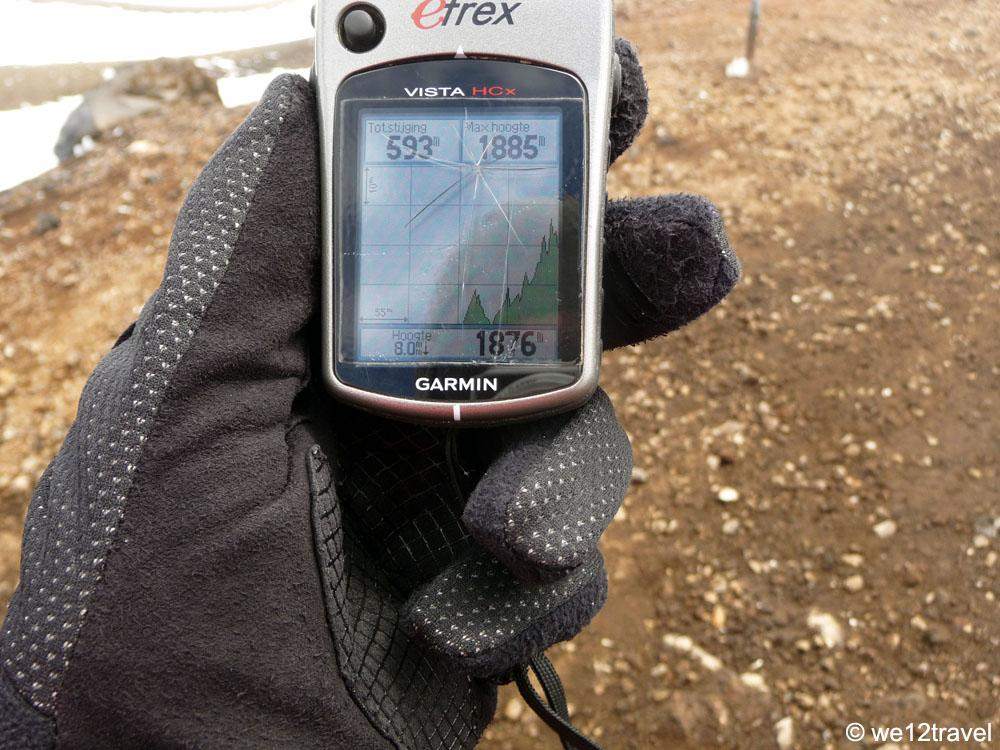 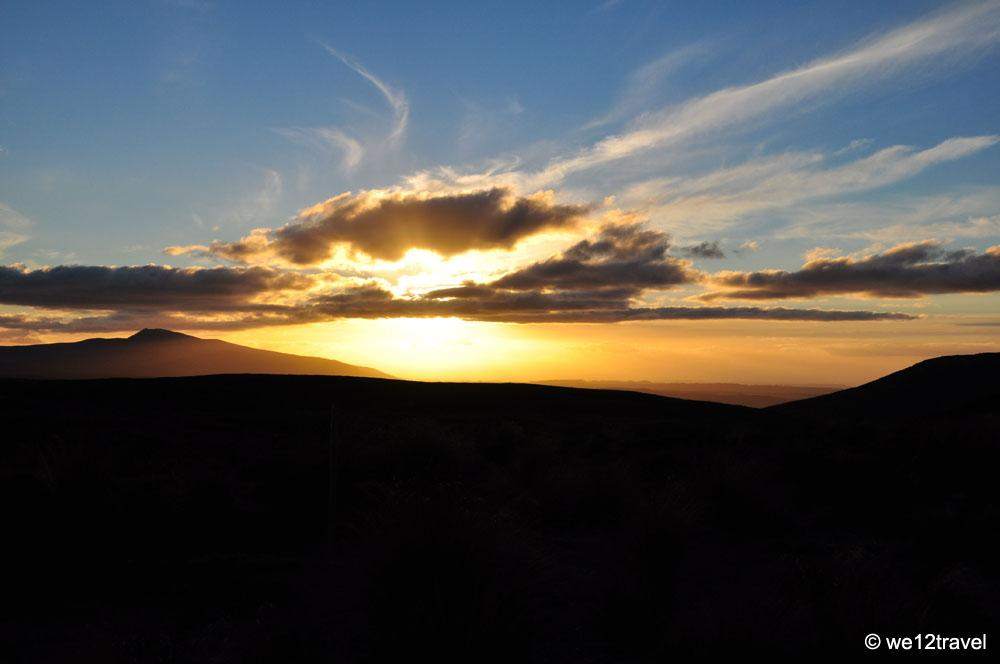 So eventually we did the Tongariro Northern Circuit in three days and one hour on day four. It was by far one of the most memorable hikes we ever did! What made is so special were the desolation of the landscape and the big difference to New Zealand’s other nature. Everyone who goes to New Zealand should at least do the Tongariro Alpine Crossing but if you’re an avid hiker, please consider the Northern Circuit as well. Tongariro is a stunning place and if we ever decided to had back to New Zealand again, we will definitely put in another stop here as the park has many other parts to be explored on foot.