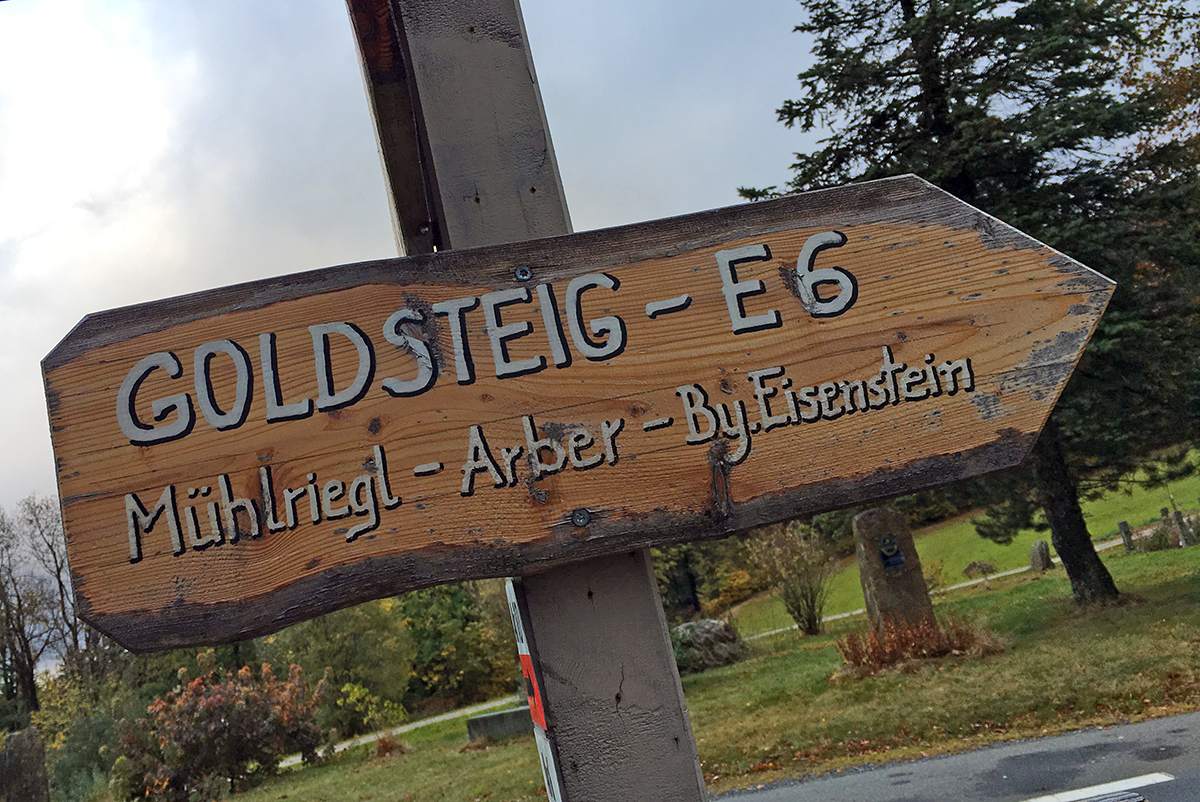 Hiking the Goldsteig in Germany: 5 hightlights

Last October David and I were invited by Top Trails of Germany to hike a small section of the Goldsteig on the border of Germany and the Czech Republic. We knew there’d be a chance it would be tricky weather wise as we traveled in late October and rain was forecasted all week long. We still decided to go for it because in general, there’s no such thing as poor weather, just poor clothing. And … sometimes forecasts just aren’t right. Unfortunately, the forecasts were spot on this time and we had plenty of rain and mist along the way. So below you will not find a regular day to day description as I usually make it, but a list with five highlights of our hike on the Goldsteig in Germany. Enjoy reading!

The former border crossing Drei Wappen dates back to 1766 and made the border between German Bavaria and Czechoslovakian Bohemia. At this place in the woods you will find Drei Wappen Felsen, a 901 m. high rock formation, as well as the Unterstellhütte and just before this spot you’ll come across Pfennigfelsen. Here you can drop a coin into the wall and make a wish (a pfennig is a former German coin and felsen means rock, so basically it’s the coin rock). The Golgsteig takes you across a large boulder area where you’ll have to use iron foot steps every now and then. Together with the various viewpoints this definitely was the highlight of section N10 for us.

On the day we were supposed to hike section N11 we had really poor weather and so we decided to spend it on a bus rather than hiking as there was a total downpour and no visibility. After a day of relaxing in Spa & Spirit Hotel Birkenhof am Elfenhain we hiked section N12, which is described as ‘hard’. According to our guide book, the 9.5 km long section would take us some 5 hours. As we hiked in low season, all mountain huts along the way had already closed for the season or only opened up during weekends. Upon arrival at the Kötztinger Hütte on the Kaitersberg we thought at first that it was closed as well. However when we saw someone walking out, we noticed it was open and decided to head in and warm up. It turned out to a great decision as it was nice and warm and very cosy inside. The homemade meals tasted amazing and while we were eating, the view into the valley below opened up for a split second. A visit to this hut is truly recommended when hiking in this area!

The climb up to Kötztinger Hütte isn’t easy but once up, you have reached the ridge of the Kaitersberg. Upon arrival it was clouded and we had no view into the valley, but during lunch it cleared up for a bit. After lunch we walked on the ridge for about an hour with a nice view. This part of the hike takes you along small alpine trails with steep drop offs and amazing viewpoints. You need to be free of vertigo when hiking this section for sure. Eventually you will reach Riedelstein (there’s an easy or a difficult trail leading towards it) and from here you’ll start the long and easy descent into the settlement of Eck. The Kaitersberg is also famous for wanting to increase the lynx population. We have spent quite some time in search of seeing one, but unfortunately it’s quite rare to see one in the wild.

On our last day we hiked a section a bit further north and arrived in less technical terrain. There still was a nice ridge walk here for us though, once we reached natural monument Steinerne Wand. This plateau reaches about 300 meters above sea level and takes you along a small and rocky trail. The trail is very worn out and has some green sections where nature has taken over, so it gets quite slippery. Luckily they have chains everywhere to keep you safe and secure. Anyone who enjoys hiking should be able to do this section without any difficulties.

The ruin of Schloss Schwarzenburg was David’s highlight of the trip, also because he has a special interest in medieval times and used to be a history teacher. The oldest sections of this former castle date back to the eleventh century. It’s located on the highest point of the Oberpfälzer Wald. You can enter at your own risk and look around if you wish. In June and July there are plays held here, they are called the Schwarzenberg Festspiele

As a bonus: meeting the maker of the Goldsteig: Michael Körner

In all honesty, I have to admit I’m a bit of a nerd when it comes to hiking. I’ve been wondering for many years how trails get maintained, who makes them, who places the signs etc. When we spent our last morning in Hotel Arracher Hof, we had a breakfast meeting with Michael Körner from the Goldsteig, who would give us a ride back to our car at where we left it. I immediately got enthusiastic when he told me that he is the maker of the Goldsteig. In the summer months he and a few others take care of the main trail and all the trails surrounding it. He makes sure that the routes are clear, markings are up and such things. All I could think was ‘that is SUCH a cool job!’ In his van he carried all signposts etc. and while he drove us back to our car I could all I ever wanted to know about making and maintaining a hiking trail.

The Goldsteig is one of the Top Trails of Germany, a group of the best multi-day hikes in Germany. The German part of the Goldsteig measures some 600 kms and has a northern and southern section. It crosses five different nature areas in eastern Bavaria and one national park. In addition, the Czech Republic also recently opened their own section of the Goldsteig, a 289 kilometer route. In total there are another several hundreds of kilometers of hiking trails that interconnect, alternative hiking paths and circular walks that are a part of the Goldsteig trail system.

Hiking map of the Goldsteig

We hiked around without any issues using the free map that was available for us at the first hotel in Herzogau. In addition we received the hiking trail booklet of the German Goldsteig, where you can find a thorough description of each section and accommodations along the way. We overnighted in hotels and carried our own luggage, you can optionally also have your luggage transported. Camping has limited options, unfortunately.

What we thought of hiking the Goldsteig

Despite the poor weather and the ongoing rain, we really enjoyed our hike on the Goldsteig. On every section there was plenty to see and discover, such as viewpoints, historical places and more. We also almost didn’t see any other hikers, sometimes giving us the ‘end of the world’ feeling. We often heard from the hotel owners that they don’t see a lot of visitors from abroad in this region in Germany. So if you are looking for an undiscovered part of Germany to hike in, the Goldsteig is just an excellent choice! We’re looking forward to exploring it more in the future!