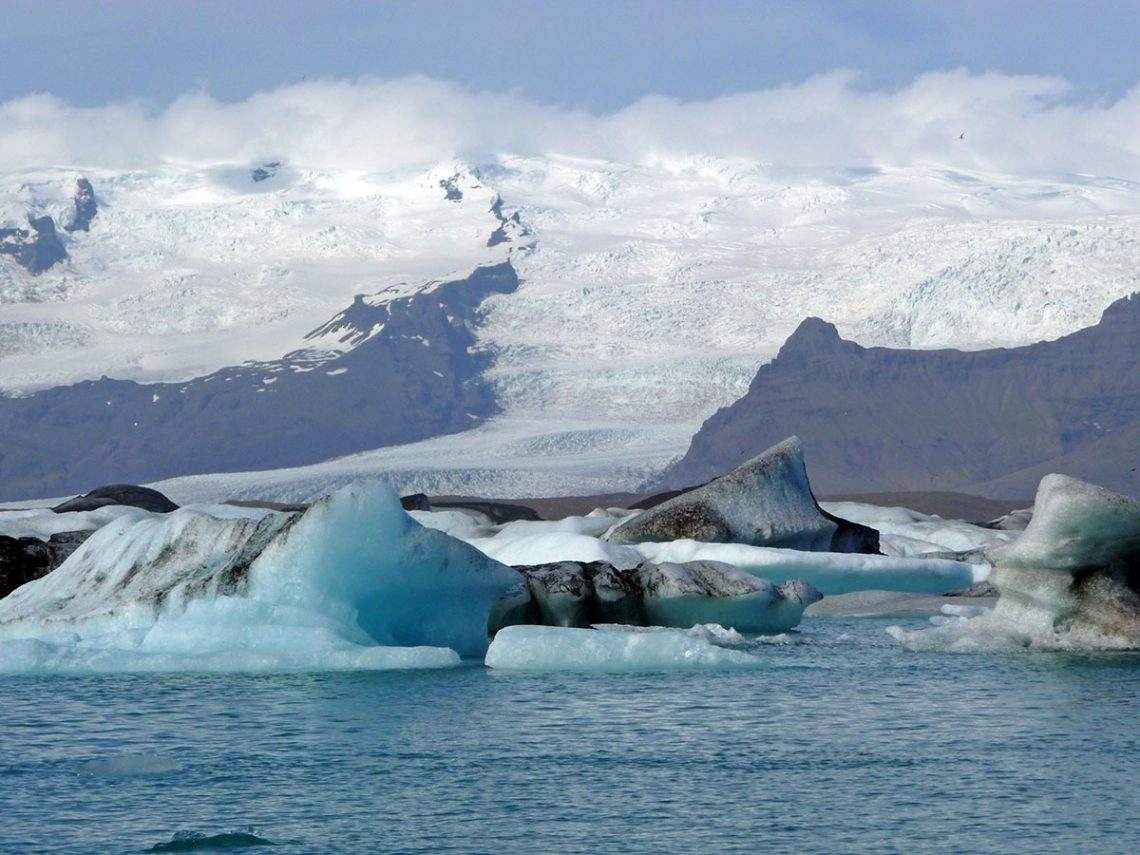 It is sometimes said that the names Iceland and Greenland should be reversed: although there are quite a few glaciers on Iceland, the country is not completely covered in ice as you might expect. Greenland is for the most part though. And Iceland is actually very green. Yet you will still find a large amount of ice and you can visit beautiful glaciers and even go inside one at the Into the Glacier attraction. You can view the glaciers from afar, walk on them, walk inside them and view the Icelandic glaciers from above. In this article I will tell you everything about the most beautiful glaciers on Iceland, enjoy reading!

About the glaciers on Iceland

Just over 10% of Iceland’s surface is covered by glaciers. In total, there are 13 glaciers on Iceland, five of which cover an area of more than 100 square kilometers. These are the Vatnajökull, Langjökull, Hofsjökull, Mýrdalsjökull and Drangajökull. Fun fact: the largest glacier in Iceland is Vatnajökull and it is almost ten times the size of Iceland’s second glacier, Langjökull. Most of Iceland’s glaciers are located on the south coast or inland. Snæfellsjökull is located on the Snæfellsness peninsula and the aforementioned Drangajökull is located in the west fjords. Many of the glaciers lie under volcanoes, of which the Eyjafjallajökull is probably the best known after its massive eruption a few years back.

The Icelandic name for glacier is jökull. We tend to say ‘Vatnajökull glacier’ but this is factually incorrect, because jökull already means glaciers. When a glacier in Iceland is melting and disappears due to global warming, a glacier officially loses the part ‘jökull’ after its name. The Okjökull in Borgarfjörður recently lost its status as a glacier because the ice is no longer thick enough to bear that name. The new name of the piece of ice left is now just Ok.

A jökulhlaup is an Icelandic term that means a flood caused by the sudden release of gigantic amounts of melting water. This occurs, for example, in volcanic eruptions under the ice cap. These amounts of meltwater can cause a large area to flood or, for example, that roads and bridges are swept away. In Iceland, volcanic eruptions under the glacier are often followed for a jökulhlaup and the Icelandic government is now well prepared for this, where possible. The term jökulhlaup has meanwhile come into use worldwide when such a phenomenon occurs.

The biggest glacier in Iceland

The largest glacier in Iceland is Vatnajökull, which is also the largest glacier in Europe. It occupies about 8% of the area of Iceland, which means that the rest of Iceland’s glaciers take up no more than 3% of the entire land of the country. The Vatnajökull is located in the south of Iceland and you will encounter it when you visit the iceberg lakes Fjallsárlón and Jökulsárlón. The glaciers of Skaftafell National Park also flow down the Vatnajökull. In 2011, the Vatnajökull was the setting for some recordings of the Game of Thrones television series. This ice cap is so immense that another 30 glacier tongues flow from it: all of these also bear the term jökull.

Mrdalsjökull is another large glacier that you will encounter during your tour on the ring road on the south coast. This glacier is the fourth largest in Iceland and what makes it so special is that the Katla volcano is under the ice. The story goes that when this volcano erupts again, there will be a big problem because it is one of the largest volcanoes in the country. Katla last erupted in 1918 and another eruption has been feared for years, but has yet to happen. Due to this last eruption, large parts of the glaciers of Mýrdalsjökull are black. The black parts of the glaciers may not be the most beautiful, but they are among the most impressive. I made a glacier walk here on the Sólheimajökull, but you can also walk independently to the ice, but not on it.

Into the Glacier and Langjökull

Another important glacier is the Langjökull, the second largest glacier in Iceland. This one is located in the Icelandic interior and offers ‘Into the Glacier’ as an attraction. Icelanders love special things and a few years ago dug a tunnel into the glacier, so you can literally enter the glacier. I did this excursion several years ago and wow, that was bizarre! The idea that you literally have tons of ice over your head is a bit bizarre, but also very special. If you want to make this excursion, look here for prices and possibilities.

A visit to Iceland is not complete without a visit to a glacier. When you take a drive along the south coast, you will automatically encounter the ice. Keep in mind that the ice is always moving and photos featured in this blog post may not reflect current reality. I’ve been to Iceland 10 times now, but the ice looks different every time. For example, Jökulsárlón iceberg lake can sometimes be almost empty, but sometimes it can also be completely filled with icebergs. It really depends on the circumstances.

In addition, it’s useful to know that there are often warning signs and ropes to ensure your safety. So never go off the beaten track and follow the rules because you don’t want to accidentally fall into a crevasse. Climbing on the ice is only possible with a certified guide. There are numerous companies that offer glacier walks and climbs.

One last piece of advice

When traveling by plane to Iceland, it is best to sit on the right side of the plane on the way there, because then, with clear weather, you can already see the glaciers from the air. It’s very impressive! I flew over the Snæfellsjökull once when I traveled to Alaska, that was also super cool. Unfortunately it is often cloudy upon arrival at Keflavík.

Do you want to travel to Iceland? Then I have the following tips for you:
– The cheapest way to book your flight is through Skyscanner.
– Staying overnight in Reykjavik? Read my tips for places to stay in the capital of Iceland for every budget here. Or check the best overnight options on the south coast here.
– Need a rental car? Check here budget options via Rentalcars. More car rental tips can be found in this blog.
– Before you travel, order the Lonely Planet Iceland or the or another travel guide.

Hopefully you found this article about the most beautiful glaciers in Iceland useful. If you have any questions and/or comments, be sure to leave them in the comments. If you want to read more about Iceland, visit one of the articles below or the Iceland homepage. This article contains affiliate links. Should you make a purchase or make a reservation through such a link, we may receive a modest commission at no additional cost to you.