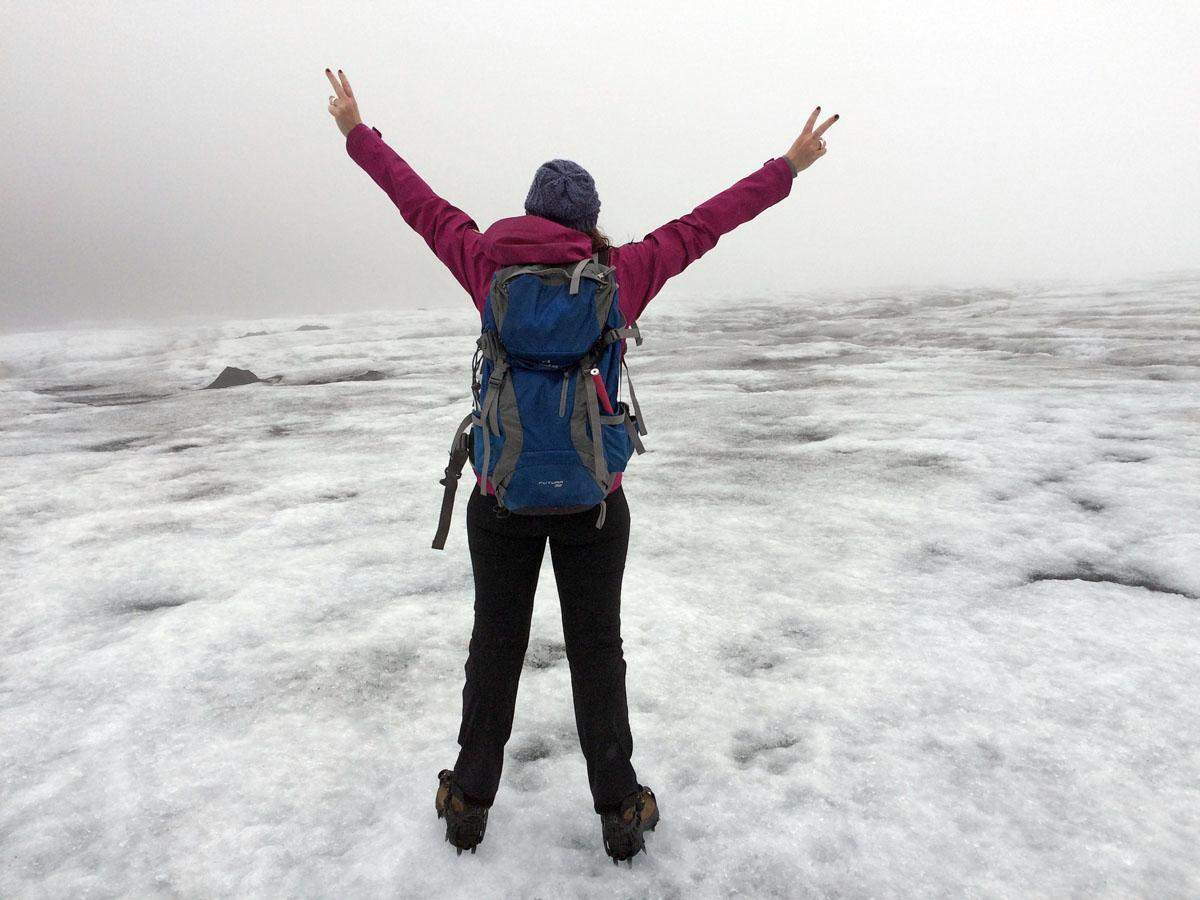 Just 24 hours ago I was on a plane flying home from Iceland. Right now I’m sitting behind my laptop, writing a new blog, one of the few I wrote over the past months. 24 Hours ago I was staring out of the window of Icelandair’s Grimsvötn Boeing 757 and looking back down on the mighty Mýrdalsjökull where I had been glacier hiking earlier that weekend. You can only really understand the massiveness of Iceland’s glaciers when flying over them, or when stepping on them. My glacier hike on Sólheimajökull (one of the glaciers coming down from Mýrdalsjökull) proved to be a good choice for my daytrip along the Icelandic South Coast.

You can’t go to Iceland …

At first I wanted to write an opening such as “You can’t go to Iceland without doing a glacier hike” but I quickly realized that I had actually been to Iceland 4 times before, without doing one myself… so that didn’t really seem like a good fit. However, now that I’ve done a glacier walk myself, I can say that it’s truly worth it and will definitely enrich your Iceland experience. Although glacier hikes (or walks) are offered on various places along the South Coast, I chose to hike on Sólheimajökull, based on my travel plans. This can easily be done from Skogár or even on a day trip from Reykjavik.

So anyway … why did I decide to step on an Icelandic glacier for the first time only now then? Well, there are various reasons, but the main one was that the friend I was traveling with, had never been on a glacier before. And that after not being on a glacier for about 5 years, I felt that it was about time again. And last but not least, because I’ve always been “obsessed” with Iceland’s glaciers so it was about time to explore one by foot…

We all know about global warming and what it is doing to our planet. I’ve witnessed it myself many times in Alaska, some of my favorite glaciers there are retreating extremely fast which makes me pretty sad. Unfortunately, this is the same in Iceland… somewhere along the way during the hike, the guide pointed out to us that it’s very likely that the place where we stepped on to the ice, will disappear within weeks, maybe days.

At the moment of writing, the walk up to the ice is just about 15 minutes from the parking lot, but soon the glacier won’t be accessible from that point anymore because it has become unstable. By then, you will probably have to walk for at least 45 minutes through the mountains to reach a safe area where you can step on the glacier. This made quite an impression on me. Sure, I knew that glaciers are retreating but somehow this story hit me hard. It made me realize that we cannot take nature for granted and how lucky I was that I still had the chance to step onto this glacier at all …

Despite this little moment of creating awareness, the hike itself was loads of fun. It already started upon arrival at the glacier, when my friend (who had, like I mentioned earlier on, never been on a glacier before) asked the guide if there would be a possibility to go to the toilet, after she put on her crampons. He just smiled and said: “Yes, in 3 hours”. The ice was broken right at that moment.

The first part of the hike took us through what I call the black part of the glacier. Although you would expect that the black stuff is made out of moraines, on Sólheimajökull this is not the case. Here, the black parts of the glacier are formed by the ashes of Katla volcano that is located underneath the ice. Word goes that if this volcano decides to erupt, we’ll be in big trouble. Or at least, it will have an impact, a much larger one than the (in) famous Eyjafjallajökull had, which we all remember vividly (if only for the newsreporters who failed hopelessly to pronounce this word the correct way). Even though the black parts of the glacier may not be the prettiest, they sure are impressive. Katla last erupted in 1918 so imagine these ashes have been here for almost 100 years …

The white part of the glacier

After about an hour we reached the “white part” of the glacier. Here there is less ash, the crevasses get deeper and we are fully surrounded by ice. The clouds closing in on us make it quite an eerie experience from time to time. Although there are various other groups on the ice, we can’t always see them, at some point all I can see is my own group and mist. In the distance I hear a waterfall and other than that, it’s silent.

There is lots of time for taking pictures… And for horizontal ice-climbing (in case you are one of those people who commented on my Facebook picture for being brave to do this, thank you, but I was not really climbing … see the real picture below) 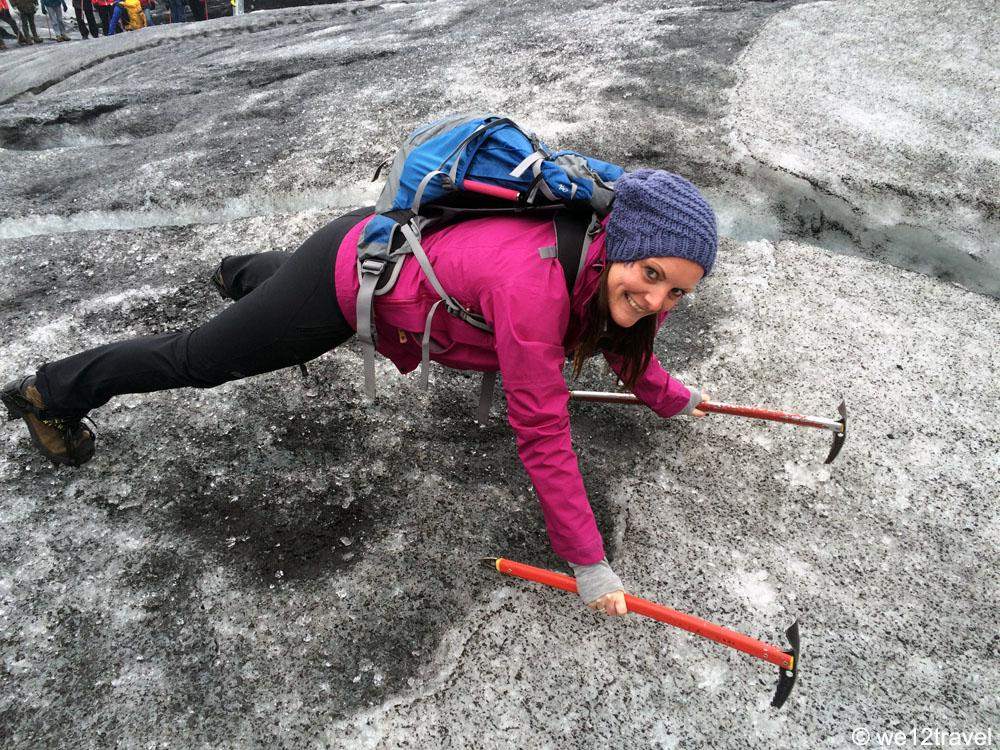 And for … well, just have a look for yourself if you are able to determine what I was doing here. Any idea? 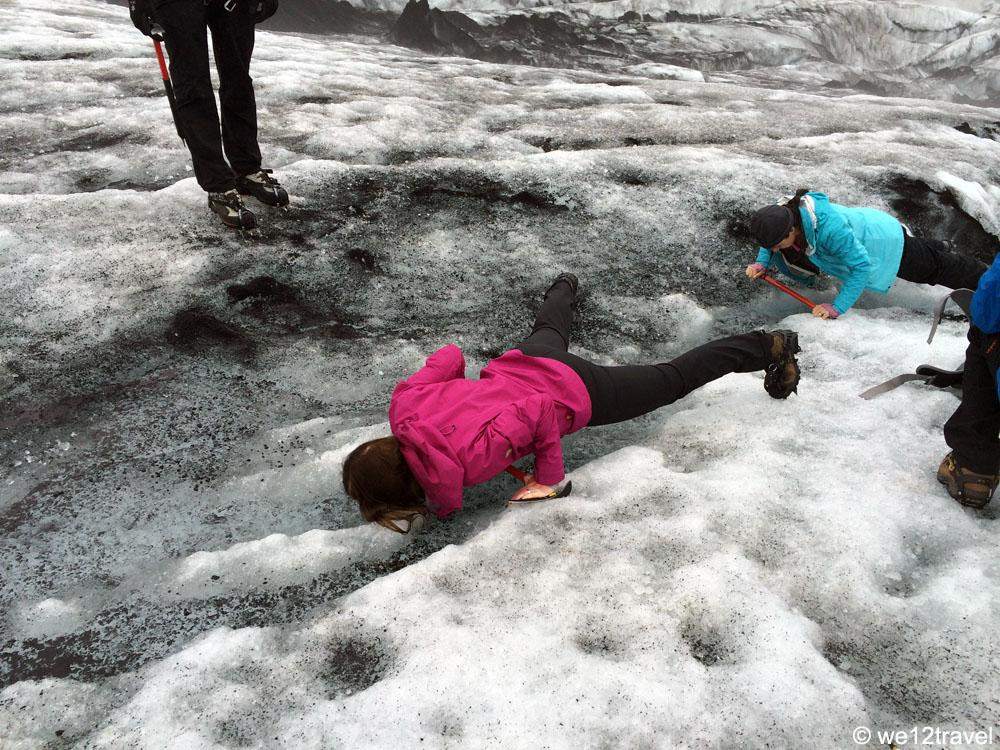 You probably haven’t guessed it, but I was drinking glacial water “the Viking Way.” Basically, you just put your crampons on the ice, lean on your arms (like doing push-ups) and then stick your mouth into the current, sipping from the ice cold water. Ofcourse, it looks much easier than it is and my shoulders were in pain for 2 days after (and in fact still are) but it was fun … this may as well have been the best water ever. Including the ashes, of course!

>Eventually we spent about 2.5 hours on the ice, or maybe even more, I didn’t really count it. We walked up quite a bit and learned a lot about the ice, volcanoes and Icelandic trolls …

Why to do a glacier hike on Sólheimajökull

So – why should YOU do a glacier hike on Sólheimajökull (or any other Icelandic glacier) then? Well, because it’s easy. Really, my grandmother could have done this. Or well, maybe not, but my mother could have done it for sure. Now that Icelandair has their #MyStopover possibility I guess this is your fastest way to access a glacier without traveling to far away destinations, at least if you are from Europe or North America. And because you should explore an Icelandic glacier up close and personal one day. They are among the most impressive I’ve seen and quite different than other glaciers. As I said before, the glaciers may no longer be easily accessible so if you are planning to go to Iceland, definitely make doing this a top priority! 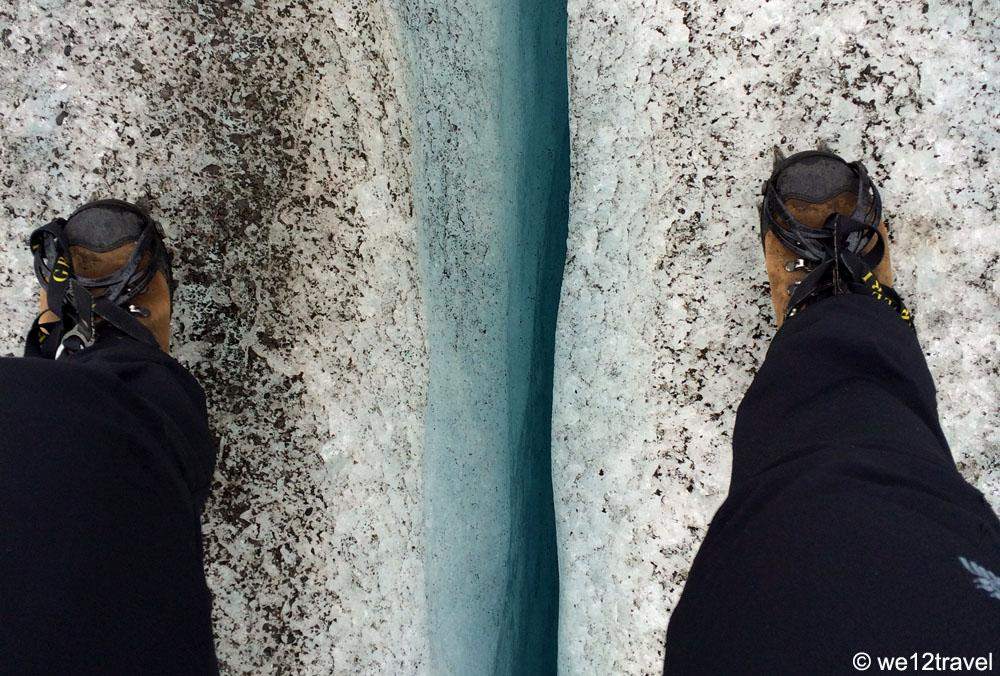 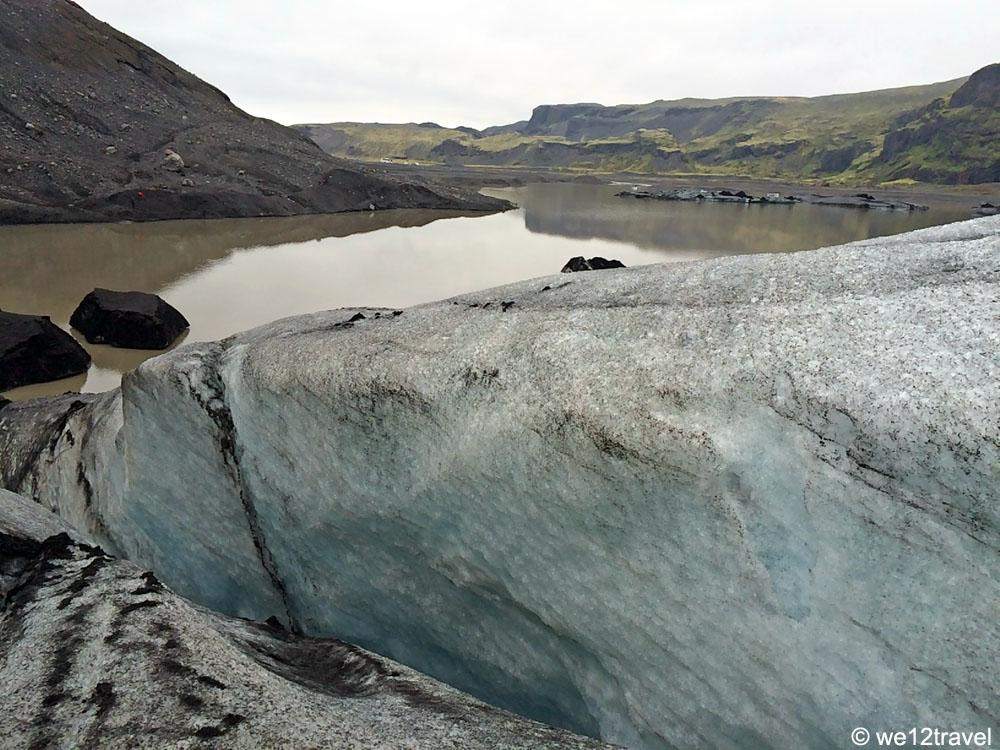 Practical info about the glacier hike on Sólheimajökull

– We booked with Icelandic Mountain Guides however there are various other companies who do glacier walks. I found them to be very professional, for example they told me my hiking boots (Meindl Surround Goretex shoes) might be uncomfortable and offered me to borrow shoes from them without additional cost. I’ve seen people stepping onto the glacier with other companies that were wearing sneakers …

– You can easily do this tour from Reykjavik, it’s a 2.5 hour drive from there. You can also start from Skogar, from here it’s just about 15 minutes now that the road leading to the glacier is almost fully paved.

– Well I already mentioned before but there’s no toilet (the café was closed when we were there) … so hold it or just don’t drink anything before. If you gotta go, remember that the small streams on the glacier will only make it worse … If you still gotta go, this is what you should do.

– Expect rain. And sun. And cold. And heat. In Iceland, you can enjoy all 4 seasons in one hour. So wear lots of layers – not too warm, not too cold. Bring raingear, a hat and mittens, even in the middle of the summer.

– Last but not least: ENJOY!

I hope you’ve enjoyed reading about the glacier hike. Since it’s already been a few years, conditions on the glacier may have changed. Want to know more about travel in Iceland? Then make sure to visit our Iceland homepage where you will find plenty of articles after visiting Iceland 10x over the past decade. Enjoy!