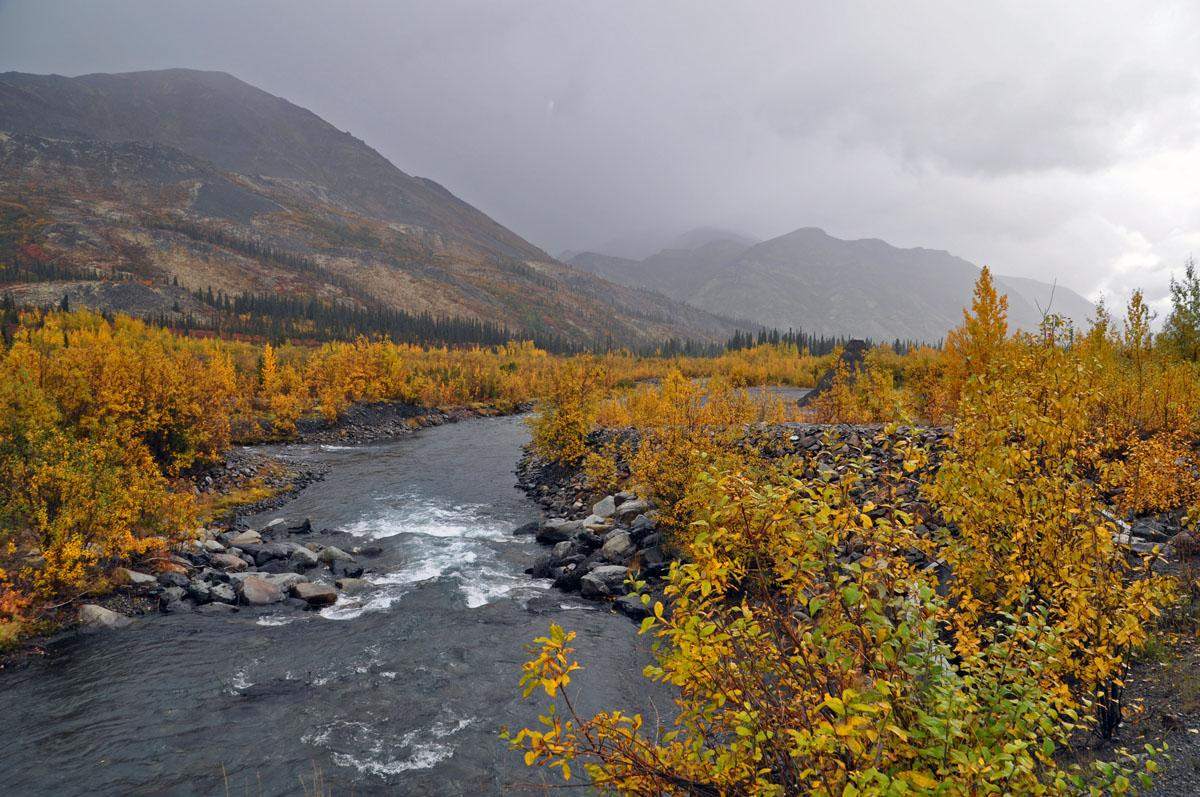 As I was taking a walk through the park during lunch break this afternoon, I realized that even though I am always complaining that it’s getting cold, fall is one of my favorite seasons. When it’s a sunny day, that is. Even though the leaves already started coloring early September here this year, most of the trees still got plenty on them. It’s been quite warm for this time of the year however if we have to believe the weather station, that will change tomorrow. While I was walking and kicking my feet through the leaves that had already come down, I was reminded of the best fall foliage ever. It was the first week of September and I traveled through one of the most desolate places in North America: the Yukon Territory.

While browsing through my pictures I had a hard time deciding which place was the best to admire the fall foliage. Basically, the whole drive through to Yukon was one big highlight, but the most special piece of it was the drive up the Dempster Highway. This highway is also referred to as Yukon Highway 5 and eventually leads all the way up to Inuvik in Northwest Territories, way beyond the Arctic Circle. In the winter, the road is even extended to the isolated town of Tuktoyaktuk, when frozen portions of the Mackenzie River are used as a road.

Unfortunately, time was scarce and we only had one afternoon to spend there. So the plan was to drive up to the Tombstone Territorial Park and see if we could do some hiking. The exit to the Dempster Highway lies just 40 kilometer east of Dawson City and once on the road, you will immediately be amazed. Because there’s nothing there. Just a long, windy unpaved road and a truck passing every now and then. Mountains all around you, sometimes right next to the road, sometimes far away in the distance.  There are no real sights along the road, in fact the route itself is the sight. And as fall was setting in, this made up for some of the most stunning landscapes ever seen. 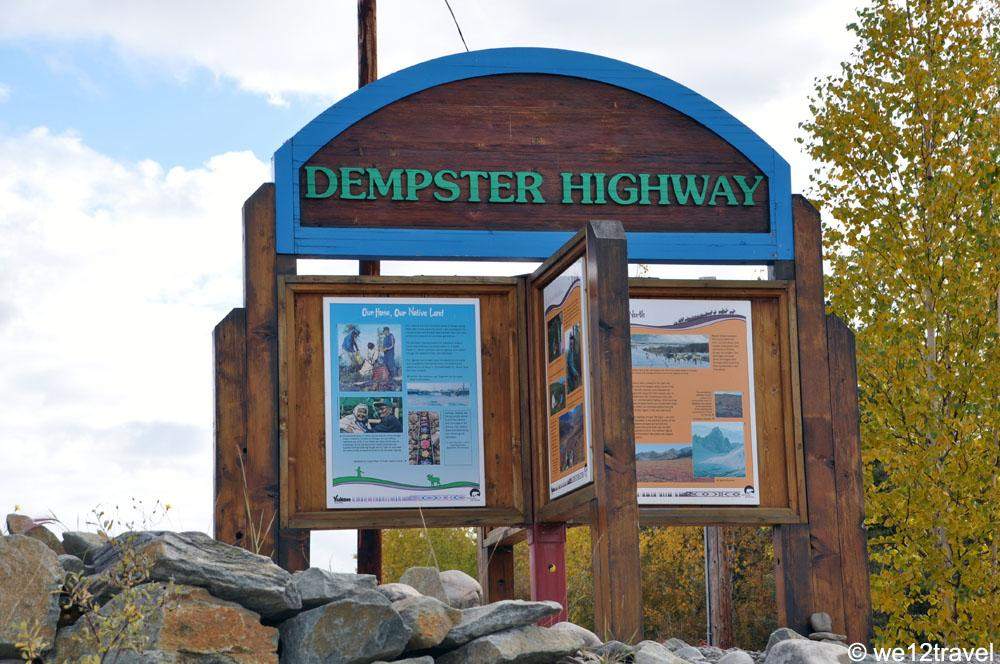 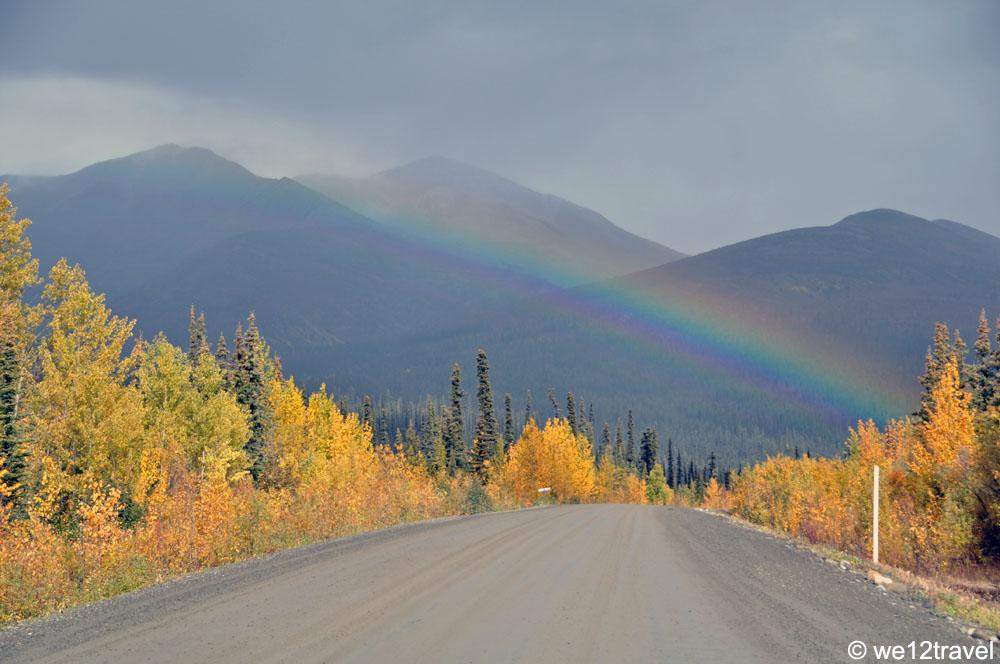 Shortly after turning onto the Dempster Highway the sun disappeared and rain set in. Even though disappointed at first, it only made the landscape a bit more mysterious. And threatening. What if you get a flat tire here? Or if you get into an accident? Or if you’re attacked by a bear when peeing in the bush? You’re a long way from home for sure…

Eventually, we made it just up to the Tombstone Territorial Park viewpoint, just beyond the visitors center. By then, the rain was coming down as a giant downpour so we decided to take a short hike only and head back to Dawson after. Being at the viewpoint and seeing the Tombstone Mountains in the distance, I knew that one day I’ll be back here to explore. Take my pack and head out into the wilderness. Rain or no rain… 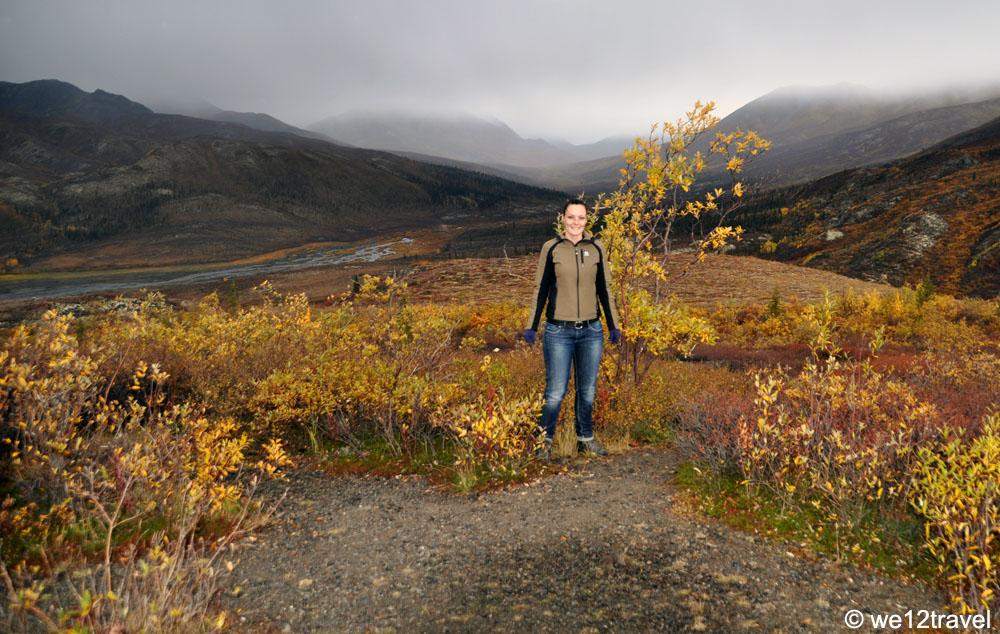 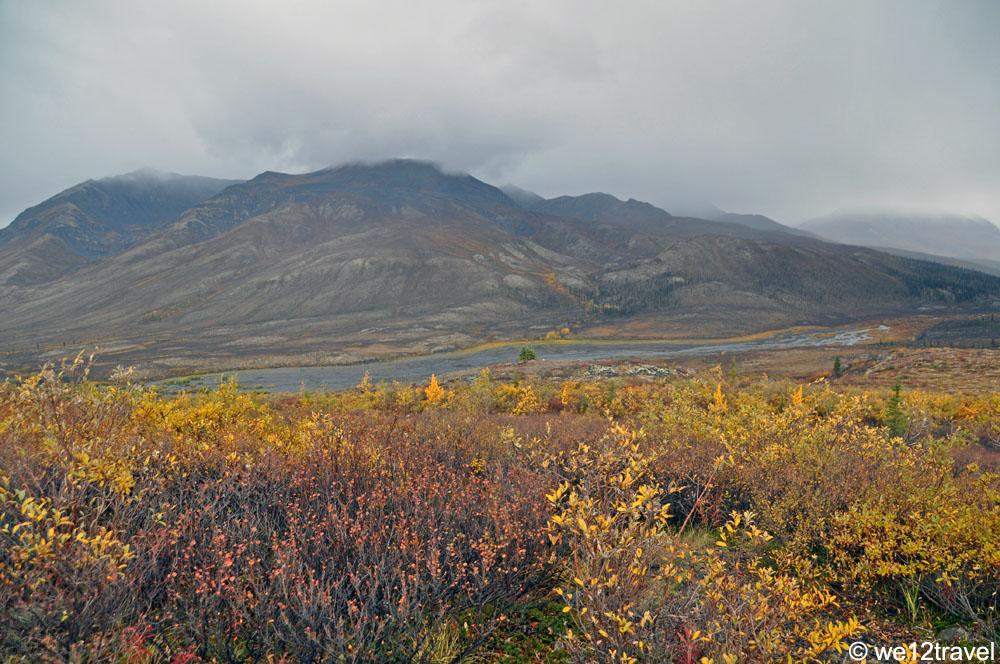 On the way back to Dawson City, it turned out that high up in the mountains, the rain had turned into snow.  According to the locals, the first of the season. Marking the changing point in seasons and preparing for a long winter to come. Hell, even the road had become a little icy, too. Such a change in less than 2 hours. Simply amazing! The pictures don’t really do justice though… 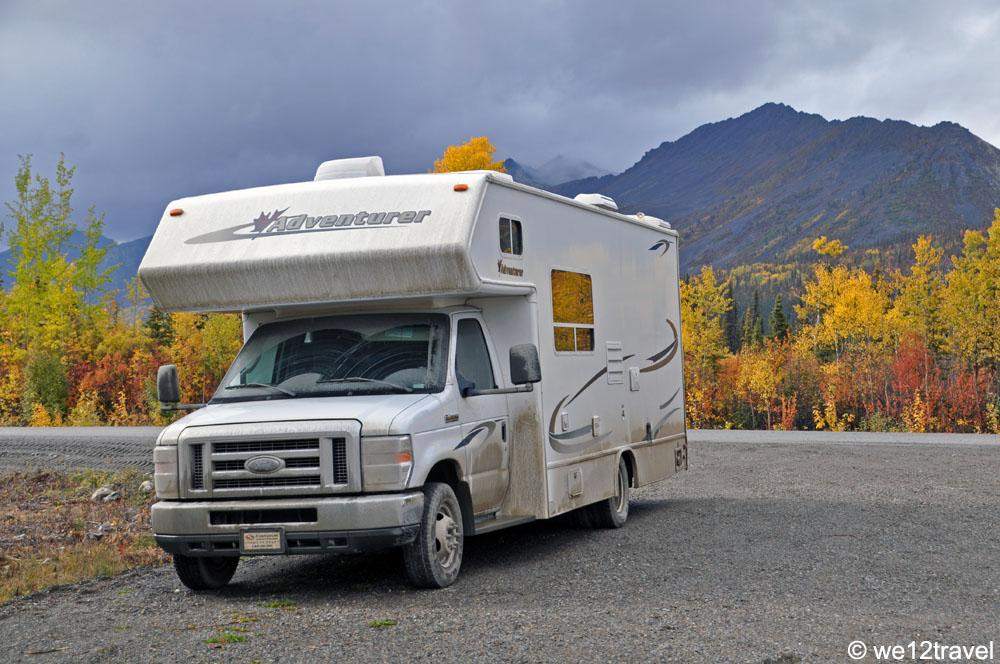 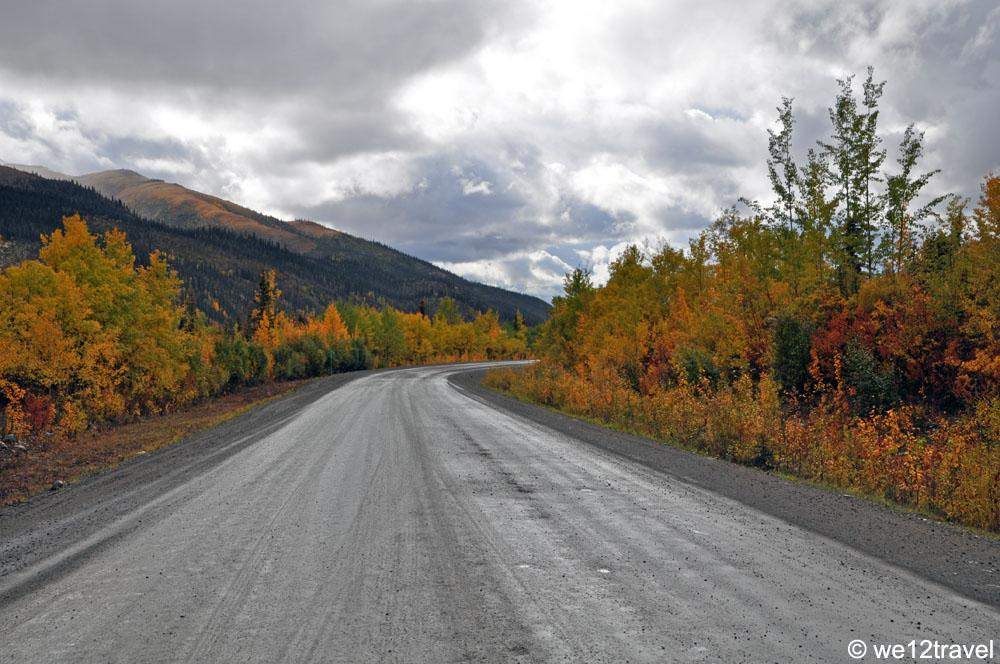 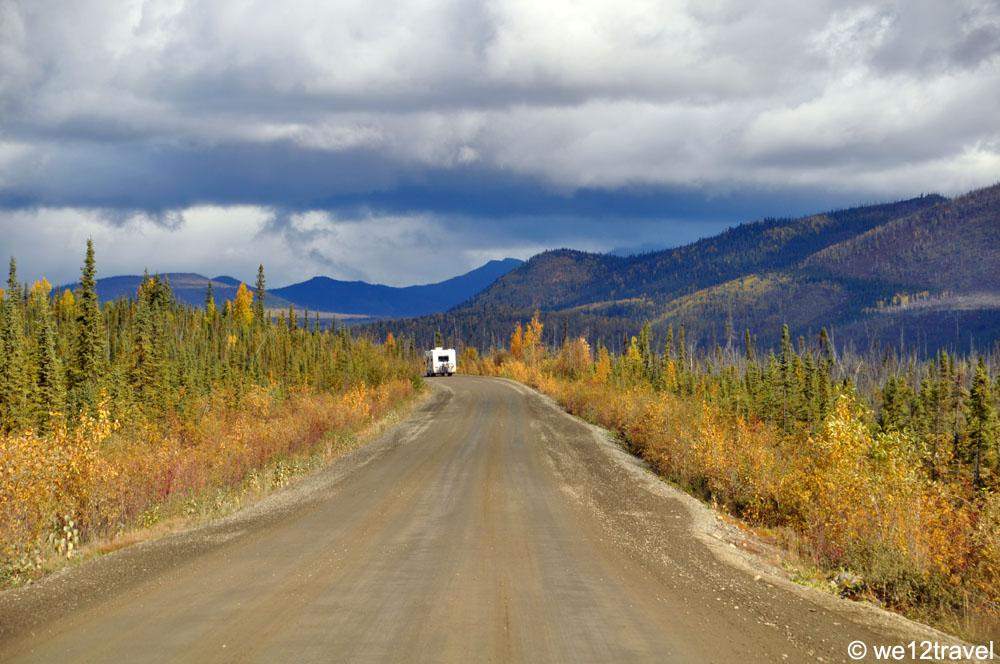 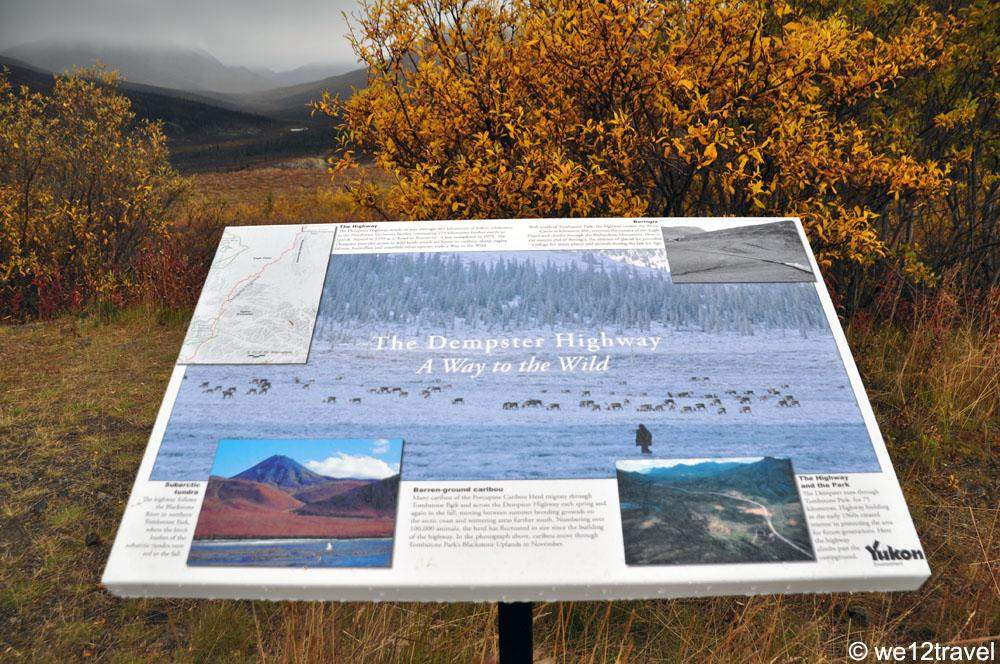 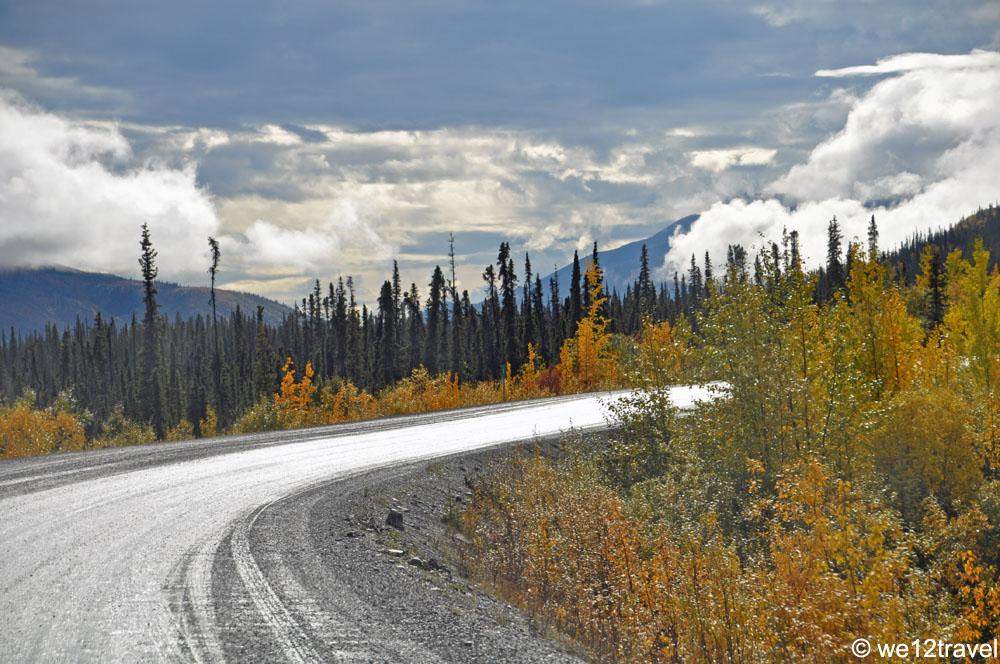 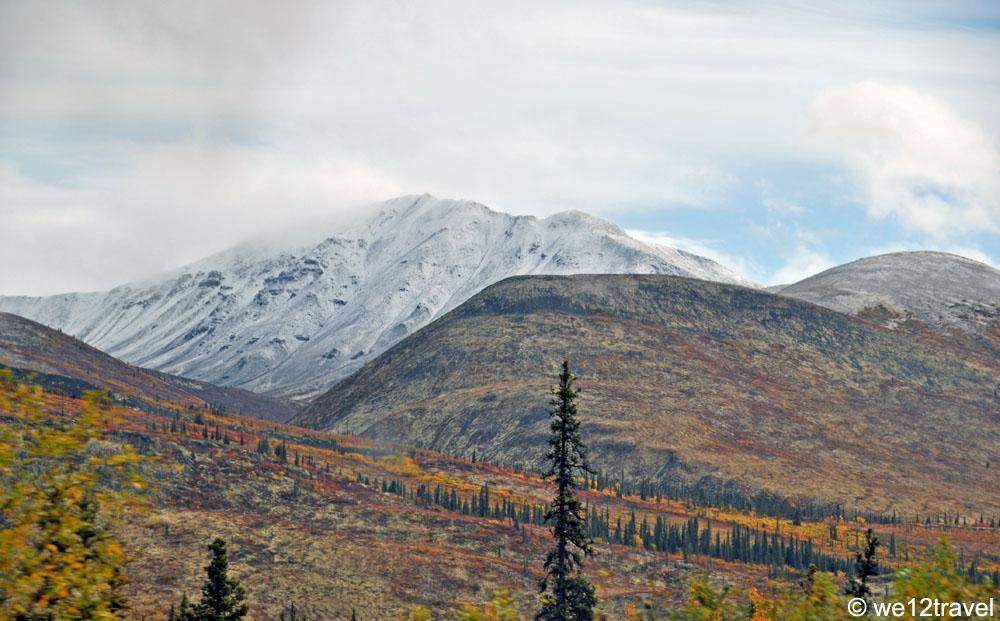 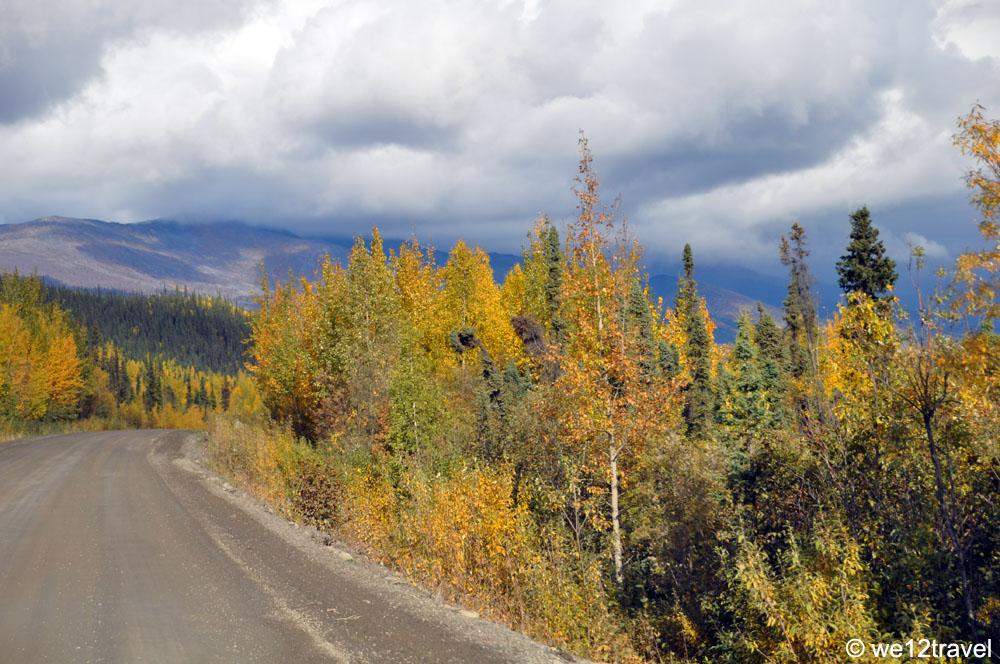 Even though I’ve traveled quite some other epic roads over the past couple of years, the Dempster Highway will always have a special place in my heart… those couple of hours made a huge impression on me and will always make me want to come back and see it with my own eyes, again.

Want to read more about the Yukon? You may like these:
– The Yukon: Larger than Life
– Dawson City: more than just a town