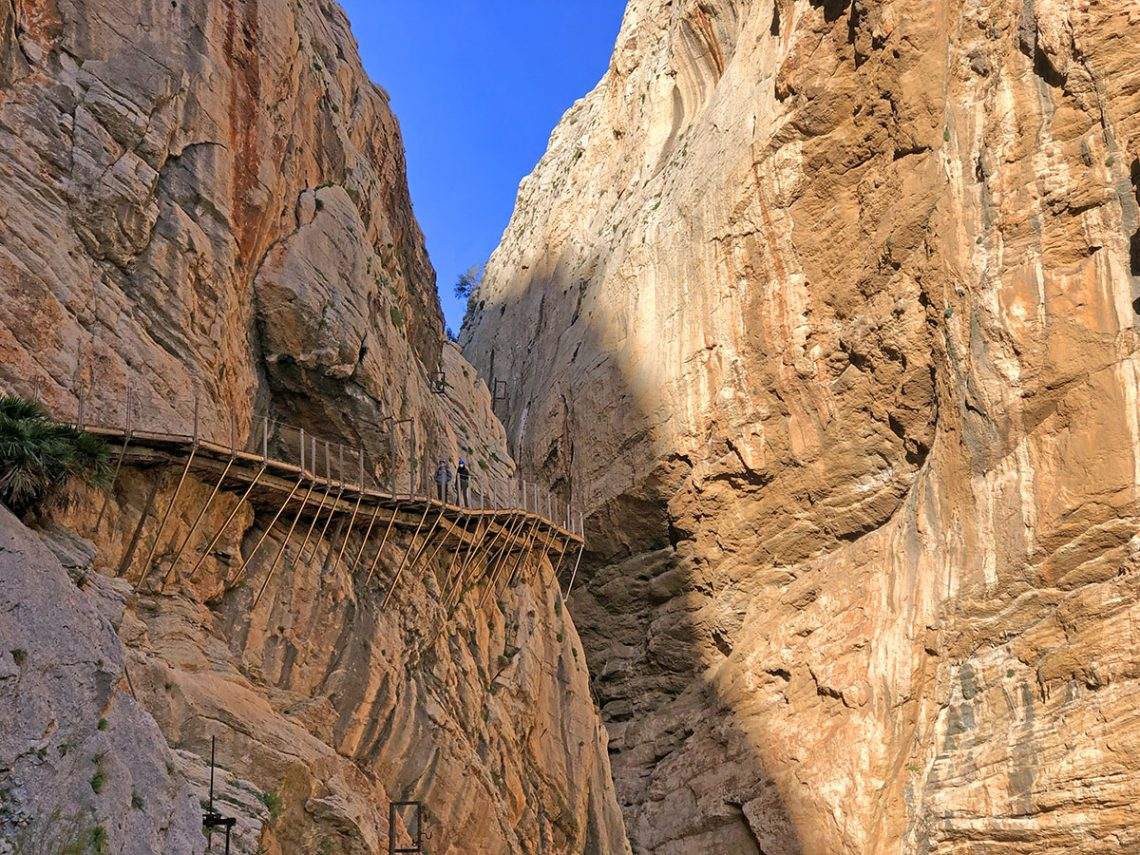 El Caminito del Rey near Malaga in Spain is probably one of the most famous hikes in Spain. Or should I say tourist attraction? If you were on social media years ago, you may have seen dizzying photos of the Caminito del Rey with a worn path in a gorge and hikers who were attached to ropes. Whereas the old Caminito del Rey used to one of the deadliest hikes in the world, the new version if it has been ‘upgraded’ and safety has improved. There is little dangerous about it, I read on various websites before I set off to Ardales in Andalucia. Nevertheless, while recently traveling in the Malaga area, I started to become curious about El Caminito and wanted to try it in person. In this article I’ll give you my honest opinion about the current Caminito del Rey including tips on where to buy tickets, how to plan your visit and more. Enjoy reading!

El Caminito del Rey was built at the beginning of the twentieth century as part of an electricity project north of Malaga in Andalusia. The hiking trail was built at the time for the employees of this project, so that they could move quickly through the narrow canyon. In 1921, this trail was given the name Caminito del Rey, the King’s Way, when King Alfonso XIII opened the Gualdalhorce water reservoir. To reach this reservoir he walked the perilous trail through the gorge. Since then it carries the name Caminito del Rey.

As alternative ways for the project and means of transportation eventually emerged, the trail was abandoned and no more maintenance was done. As a result, the concrete structure fell into disrepair and some hikers even died here, most recently in the year 2000. The government decided to close the Caminito del Rey. Renovation began in 2013 and the trail was reopened to the public in 2015. Ever since no more deaths have occurred on the Caminito.

Is the Caminito del Rey dangerous?

No, the current Caminito del Rey is not dangerous. You are required to wear a helmet at all times and the wooden construction is sturdy. The trail is wide enough for two people to pass each other and the suspension bridge and stairs are very sturdy too. As an experienced hiker I found the trail very simple. Having said that, I can imagine that people who are afraid of heights will not enjoy this trail. My boyfriend didn’t come along with me for that particular reason.

If you would like to walk the Caminito del Rey trail, it will take you about half a day, excluding transport to and from the start. Although the current Caminito del Rey is built so that hikers can start from both entrance points, at the moment (January 2022) it’s only possible to start on the entrada norte, partly because of the pandemic. This means you’ll do a one way from north to south.

From the nearest parking lot (more about parking and the Caminito del Rey bus you can read further on in the article under the practical tips) it’s a 1.5 kilometer walk to the entrance. This section starts at the main road and you’ll walk through a tunnel of about 150 meters and then enter a gorge. Here you’ll follow the signs to ‘Caminito del Rey.’ At the entrance, your ticket will be scanned and you will be given a hairnet and helmet. From here the trail starts. You will arrive almost immediately on the wooden boardwalks above the gorge.

After a good half hour walk on the wooden boardwalks, the trail flattens out and you end up in a forest. Here are some opportunities to take a break and you can have a drink or something to eat. Further on you will go up the next part of the Caminito del Rey. This is also where the glass floor and the spectacular suspension bridge at the end of the gorge are located. After the suspension bridge and waterfall, you have to climb a few more stairs before you reach the end of the Caminito del Rey and walk for about two kilometers to the end point of the walk in the village of El Chorro. Your adventure on the Caminito del Rey has come to an end here.

I haven’t exactly measured the walking distances, but I think the ‘exciting parts’ are twice a kilometer long, maximum. I wasn’t aware beforehand that there is still a forest path in between these two parts. So you don’t walk through the gorge all the time. In total you walk 7.7 kilometers, including the part from the parking lot to the start and from the end to El Chorro.

Because the Caminito del Rey has become a real tourist attraction, it’s a must to book your tickets well in advance. This can be done on the website of the Caminito itself or with a tour company, then you book a tour including a guide and possibly transport from/to Malaga. I traveled over the Christmas holidays and booked my ticket about a week in advance. In summer and during the other holidays it is recommended to book further in advance as the maximum number of walkers per hour is capped. This number has also halved due to the pandemic. So I would advise to book as early as possible in advance:

El Caminito del Rey is located about an hour north of Malaga, between Ardales and El Chorro. Since we were camping in Ardales, I have no experience with parking as we left our vehicle at the camp site. However, I have heard from people that parking is quite disastrous and that extra parking spaces are being worked on. There are paid parking spots or you can park the car along the road if you are very early in the morning. Keep in mind that the parking spaces closest to the entrance fill up the fastest, so allow plenty of extra time if you booked a little later in the day. You don’t want to miss your entrance time.

At the end of the walk, take the Caminito del Rey bus back to Ardales. There is considerably less parking space in El Chorro so I would not advise parking there. The bus costs a few euros (cash only) and runs very regularly. In case you quickly suffer from motion sickness: take a motion sickness pill because the road is narrow and winding.

Near the start of Caminito del Rey are two restaurants. I didn’t think they were great, but that’s what you can expect from a tourist attraction. There is nothing to eat or drink along the way, so bring plenty of water (at least 1.5 liters in summer, 1 liter in winter) and a few snacks. There are also restaurants and a tiny supermarket in El Chorro.

We camped at Camping Parque Ardales. Since we visited in winter, there were only campervans, but they mainly have tent sites and a few bungalows. It was a great campsite with places under the trees, I can imagine that this is very nice, especially in the summer. In winter it quickly got cold when the sun was gone. See all places to stay in Ardales here.

If you don’t want to spend the night in Ardales, you can visit the Caminito del Rey from Malaga or the Costa del Sol. There are various excursions that you can make. Those will take a full day including transport. These excursions are usually with a guide, although I have seen many people who ended up just walking through the canyon on their own while on a guided tour.

– During the winter it’s cold. Bring a thick jacket and possibly gloves. You will walk in the shade for most of the walk.
– A helmet is mandatory and you may not take it off. There are cameras along the way and there are employees in various places who monitor this.
– Keep in mind that it gets very hot in the summer, so it is best to book as early as possible in the morning.
– Wear sturdy shoes, no slippers or heels.
– Selfie sticks, tripods etc. are not allowed.
– In case of bad weather, the walk can be temporarily closed, for example in case of strong wind, because the suspension bridge then becomes dangerous.
– Children are allowed from 8 years old.
– The entrance fee is 10 euros (early 2022)

My honest opinion about the Caminito del Rey

So here’s my honest opinion about the Caminito del Rey. Initially I was super excited! I had been looking forward to it all week. Having already hiked the Embalces trail and climbed several peaks in the region, this seemed like the icing on the cake during my stay in Andalucia

Although the Caminito del Rey is special, I did not find the trail very exciting. I must admit that I’m not afraid of heights. So the “dangerous” is pretty much gone. However, it was beautiful. You just have to share that beauty with other people. Many people even. The fact that you have to book your ticket for the Caminito del Rey in advance and the many tourists did detract from the experience a bit for me. This does not alter the fact that the vultures circling high above my head and the beautiful views into the gorge are simply spectacular.

Would I recommend the Caminito del Rey to you? Absolutely! However, if you take into account that you are certainly not the only one and that you sometimes even walk in a parade and that it is no longer very exciting, you will not be disappointed.

Hopefully you found this blog about the Caminito del Rey useful and I gave you an honest idea of what to expect of it. I’m curious about your experiences, feel free to leave them in the comments. Want to read more about hiking in Spain? Check out all the articles I wrote here!

This article contains affiliate links. If you make a reservation or make a purchase via such a link, we will receive a modest commission at no extra cost to you.