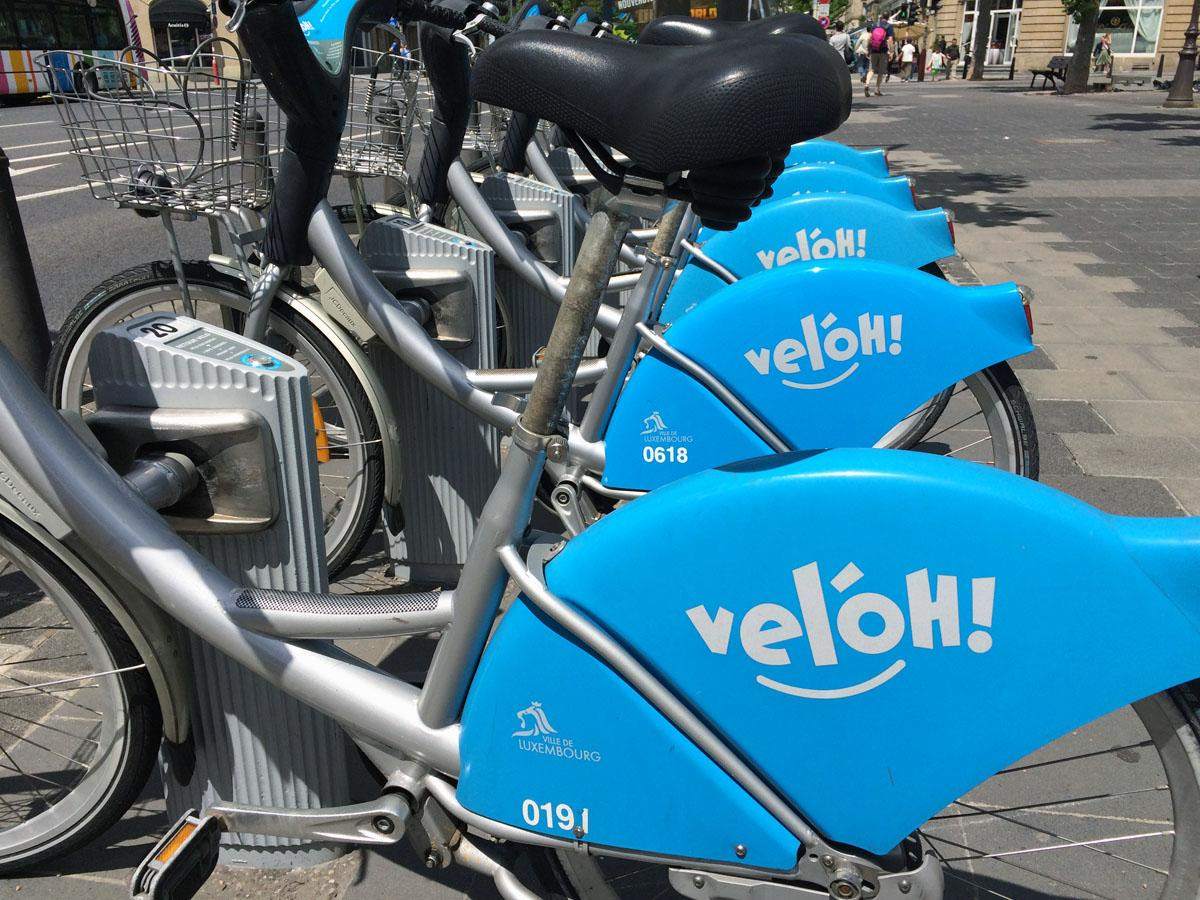 Nine years ago we visited Berlin together (incl. parents-in-law) for the very first time. Here we were introduced to cycling in the city and looking back at it, this was the highlight of our trip. We are typical Dutchies after all so love to cycle anywhere we can. A year after Berlin, we discovered Vancouver by bike and ever since, we always try to cycle in the cities we visit. Cycling is the ideal way to be quick yet to see a lot. Plus it leaves you outdoors, much healthier than stepping into smelly public transport. Over the past years, we cycled through Barcelona, Anchorage (Alaska), Vienna and Buenos Aires, just to name a few places. Last summer we spent a couple of days in Luxembourg City and as you have probably guessed already, we cycled there as well. Today we will tell you all about cycling in Luxembourg City and how you can easily rent a bike.

The city center of Luxembourg City is relatively small however very suitable to explore by bike. A company named Vel’oh (French for bike) offers you to rent a bike at a super cheap price: just one euro per hour! Vel’oh has 72 rental stations all over town, where you can find approximately 15 bikes at each station. You cannot reserve a bike so when there’s one available, it’s yours to take!

How it works
Go to the terminal of the station and fill out the details asked. You will be asked to authorize your creditcard as a deposit in case you decide not to return the bike. After filling out the details, you can pick a bike. The best way to do this is to get a one week subscription for one euro. Then, the first half hour is free, after this it’s one euro an hour, which is super cheap compared to other places we have rented bikes before. As the first thirty minutes are for free, you can easily move throughout the city for almost nothing, as long as you return the bike within the first 30 minutes. The stations are approximately 400 meters away from each other so there will always be one relatively close to you! 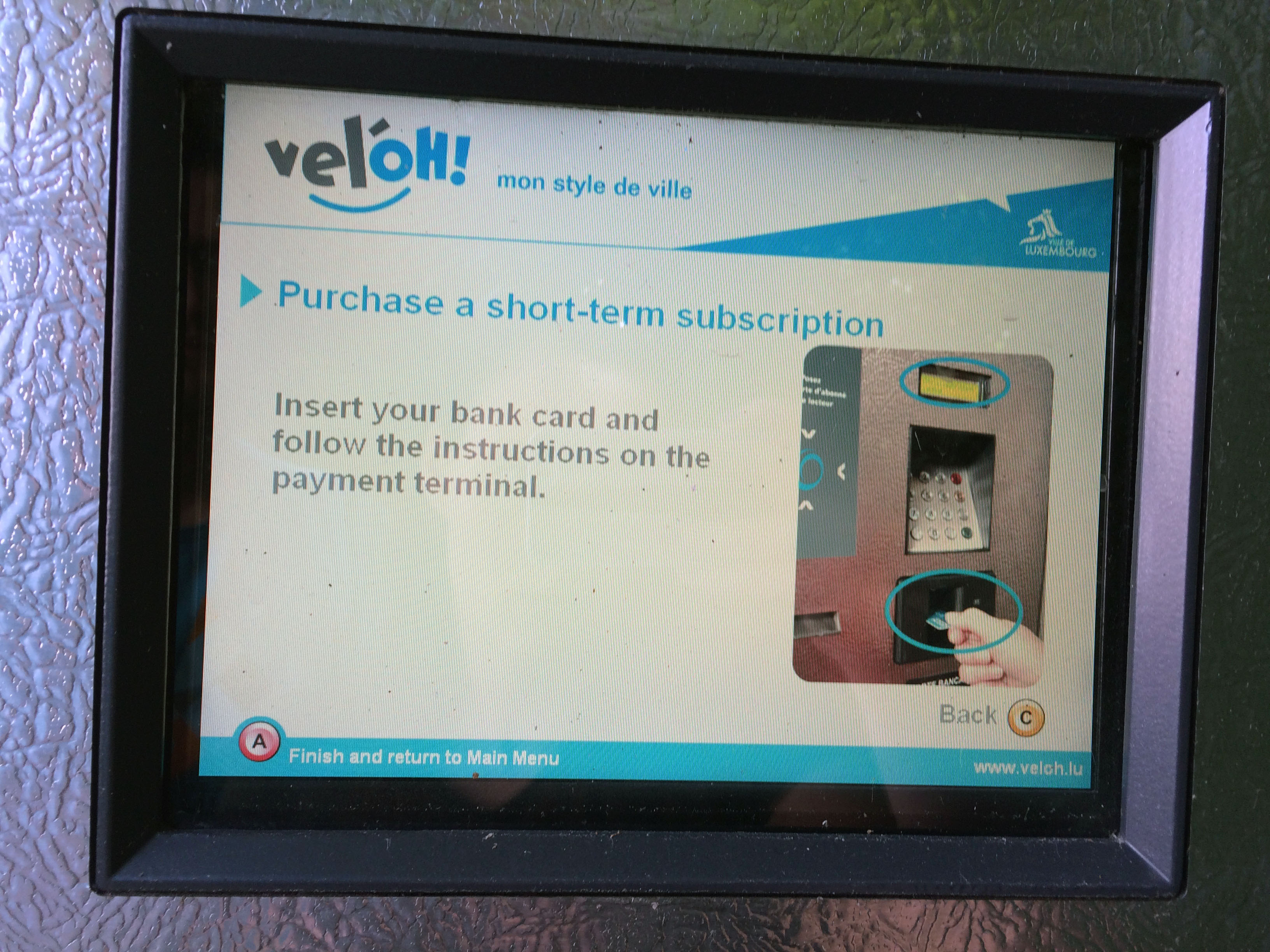 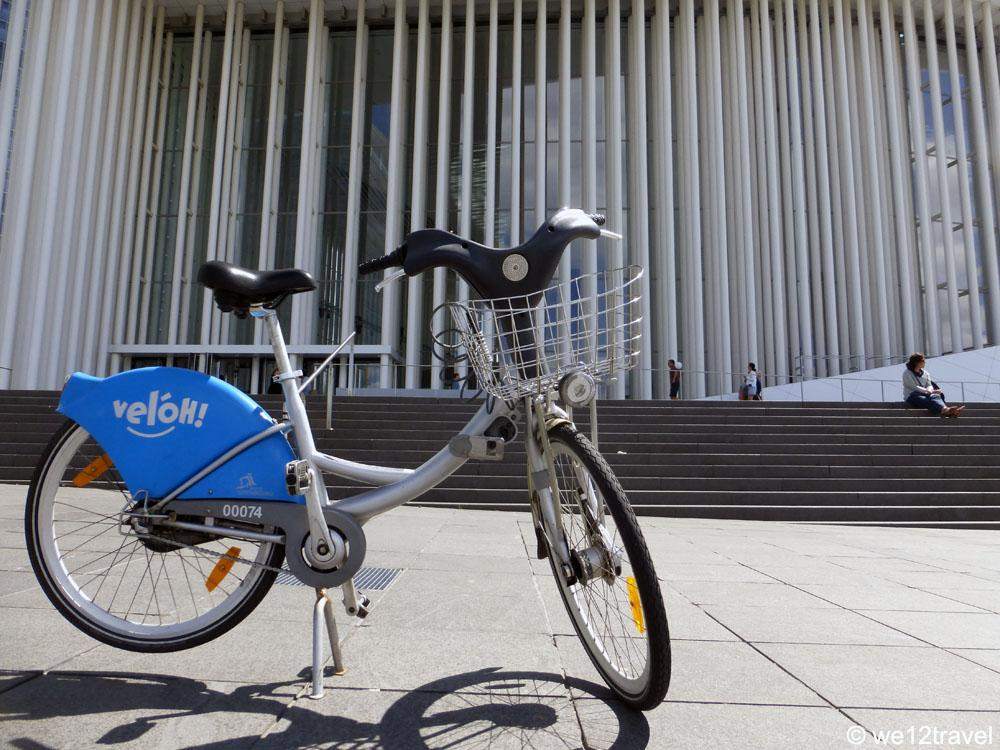 We spent our afternoon in Luxembourg City the active way (like you would expect anything else from us). We visited various city parks (more about that in another blog) and we went to several neighbourhoods such as the historic part of town as well as the modern area around the fabulous and very photogenic Philharmonie.

Cycling in Luxembourg City felt pretty safe to us. The roads in the city centre aren’t too busy and in many places they actually made bicycle lanes. The rules aren’t very different than the rules in Holland, for a full list of traffic rules, check this site.  We did not feel unsafe at any point, well OK maybe only when I tried to make a selfie when going downhill on a very steep road, but that’s another story… 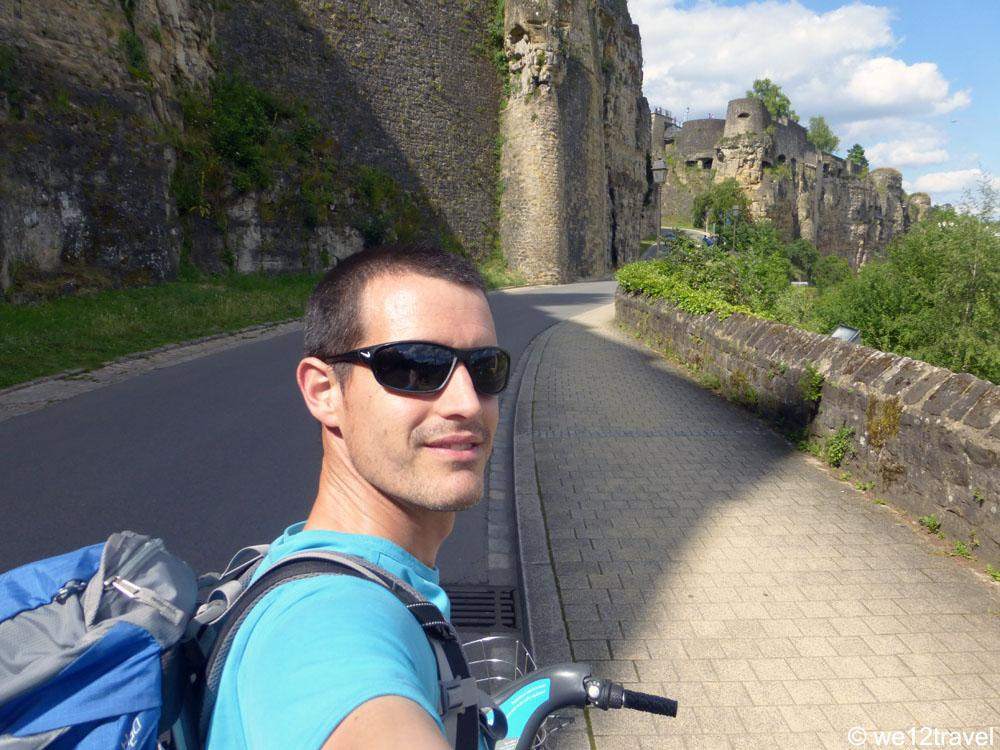 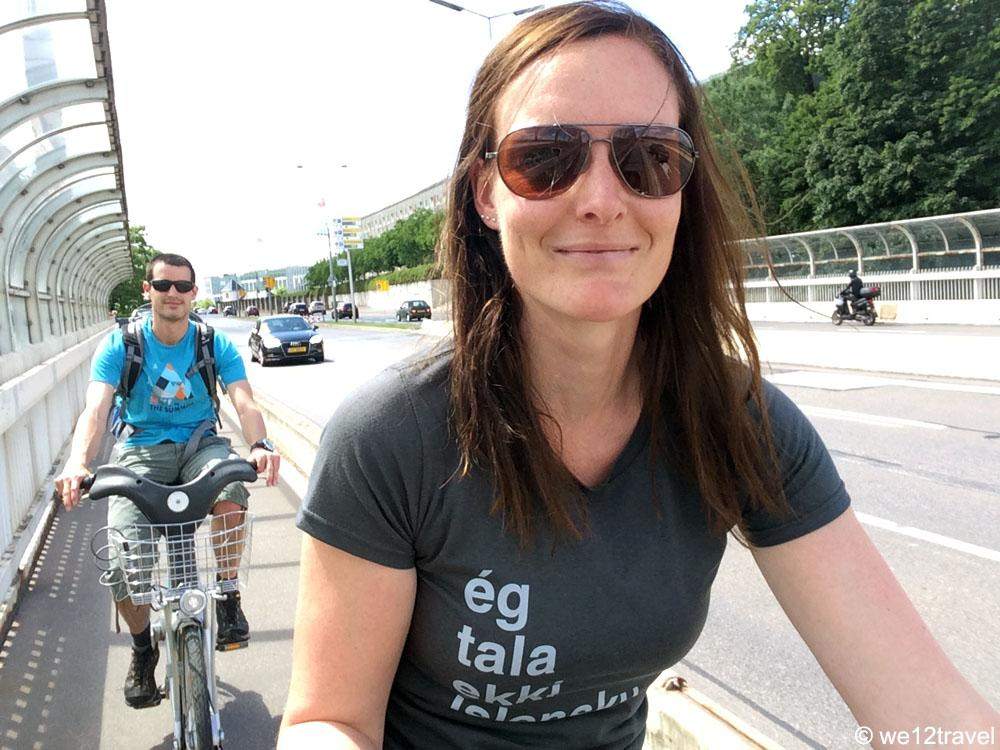 The good things about the Vel’oh system

The price is more than great and also the fact that there are so many rental stations makes it an awesome way to get around the city. We spent our afternoon cycling and walking through the city, an ideal combination for the active ones like us. The bikes are available for anyone and in case there is none available at the station of your choice, you are never very far away from the next station. The bikes come with a basket in front (very useful) and there are lights on them as well.

The things that could use some improvement

We didn’t really “get” the sytem at the terminal, it took us a bit to figure out how the descriptions worked (choose short term / one week). It took a while and when we got it, we weren’t sure if we’d done it right. Same goes for bringing them back, our station didn’t really show that we brought the bikes back, but up until now (3 months later) we are not charged for a missing bike so I assume all went OK. Compared to normal bikes, the Vel’oh bikes are pretty heavy (also because of the lock) and they have a limited number of gears. As Luxembourg Ciy is not exactly flat, your legs will definitely have to work to move all over town. For experienced bikers this should be no problem, however people that don’t usually bike may find it a bit of a challenge.  But ofcourse there is always the option of taking your bike by the hand and walk uphill… 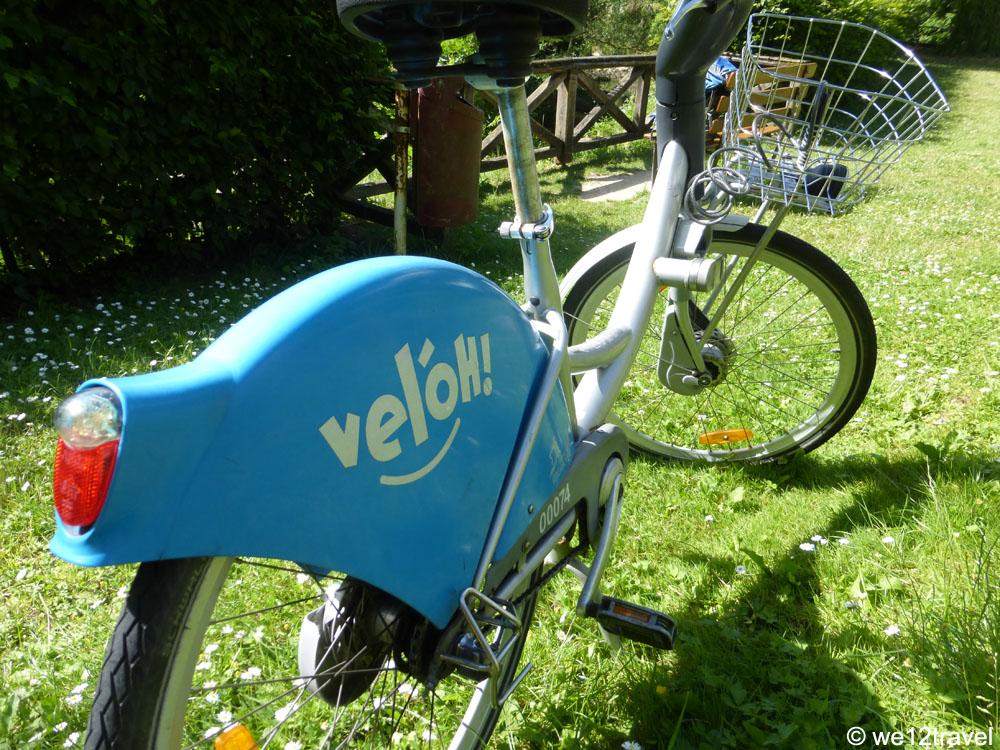 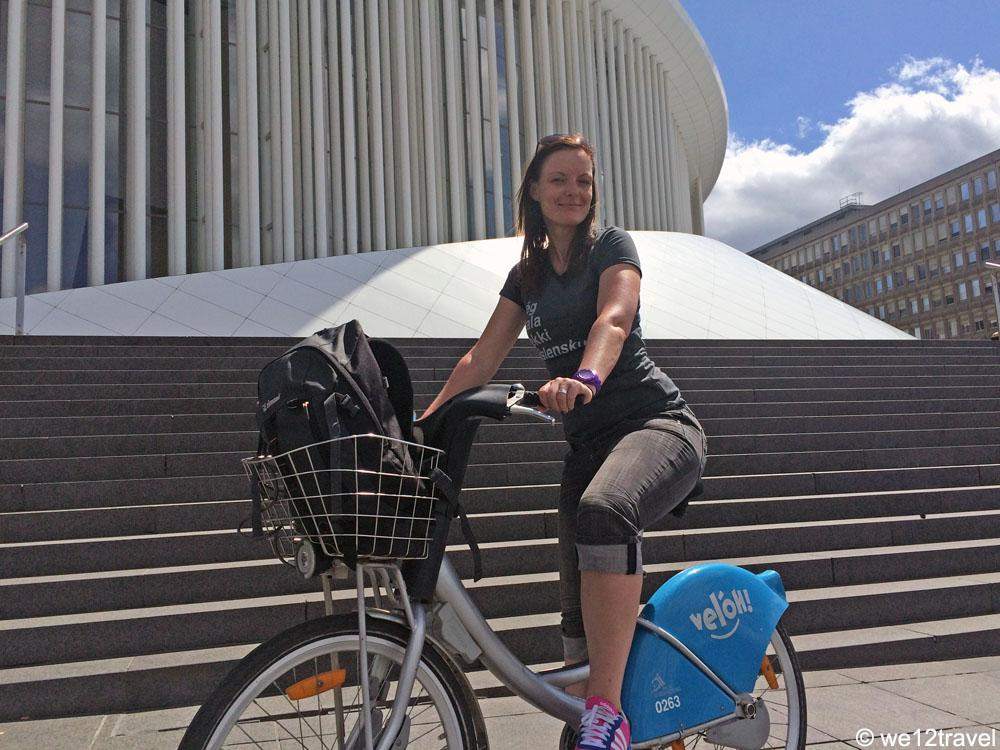 For more information about Vel’oh, their rates and services, please take a look at their website.

What is your favorite way to get around in a city?

[Disclaimer: we were invited on this trip by Visit Luxembourg however, as always, all opinions are our own.]

Want to read more? Then check these blogs:
– Hiking the Mullerthal Trail in Luxemburg
– Mountainbiking the Slick Rock Trail in Moab
– Cycling the Otago Rail Trail in New Zealand