Approximately one and a half year ago I was on a press trip in Curaçao with a bunch of other bloggers, as well as a journalist from a big Dutch newspaper. She did not have a clue about blogging and at some point asked me if I wrote about things I didn’t like. I told her that it’s my choice not to do that most of the time, because for me blogging is a hobby and should be fun. I’m not a reporter, I’m just someone who writes because she likes to. However, as I’m doing a round-up of the roadtrip through Patagonia we made last year, I just could not skip this post, writing about climbing Villarrica Volcano in Chile and the uncomfortable truth of that climb.

When planning our trip to southern Chile and Argentina, I knew that there was one thing I really wanted to do: climbing Villarrica Volcano. A colleague of mine did it about 5 years ago and came back with stunning pictures, so I put that high up on my bucketlist. Basically, on top of it!

Upon arrival in Pucón we were happy that the weather was good, so at least that part of our climb looked promising. After checking into our hotel we received a phonecall from the company we’d be going to hike with, that we should come to their office to check out gear and sign some waivers. Upon arrival we were told that they hadn’t been going up for nearly a week already and that despite the sunny weather, the winds kept them from going. Ofcourse I read the stories in Lonely Planet and other guidebooks that it’s not a fun stroll in the park and that people died attempting to climb it, even when with a guiding company, but as I also found that Lonely Planet tends to rate some activities more dangerous than they actually are, I didn’t pay much attention to it. I refused to dig deeper however because it was just not something I was interested in reading before climbing.

That evening we went for a ride to see the sunset and as I was enjoying the silence and the sun was lighting up the volcano, a small cloud of smoke came out from the top of the volcano. “That’s one hell of a bitch we’re going to climb tomorrow” … 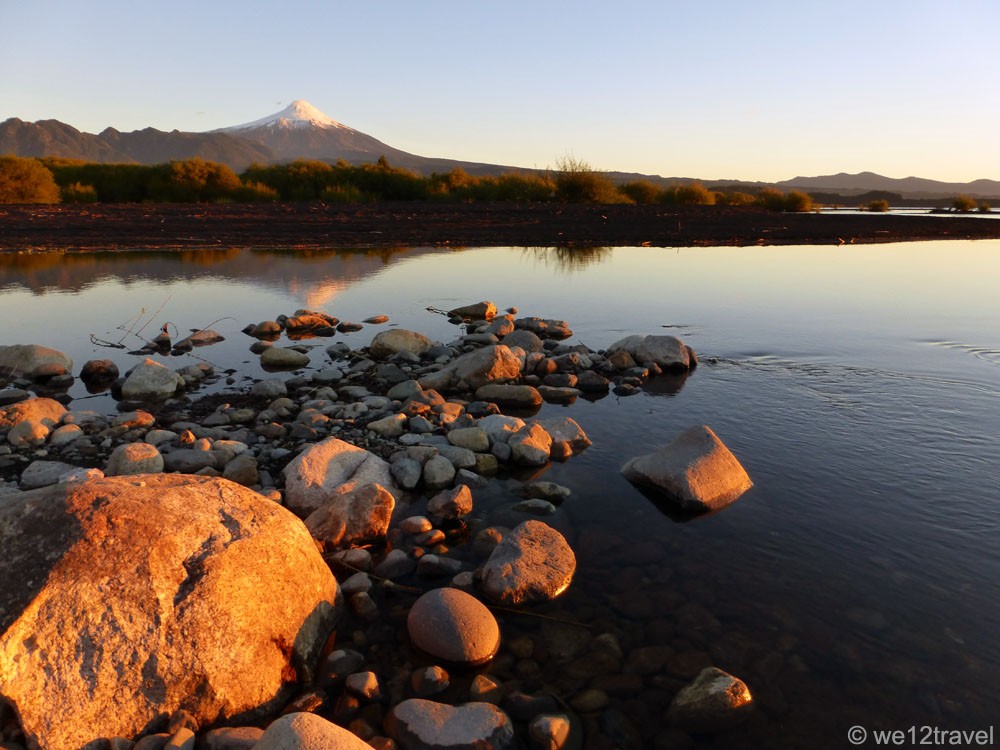 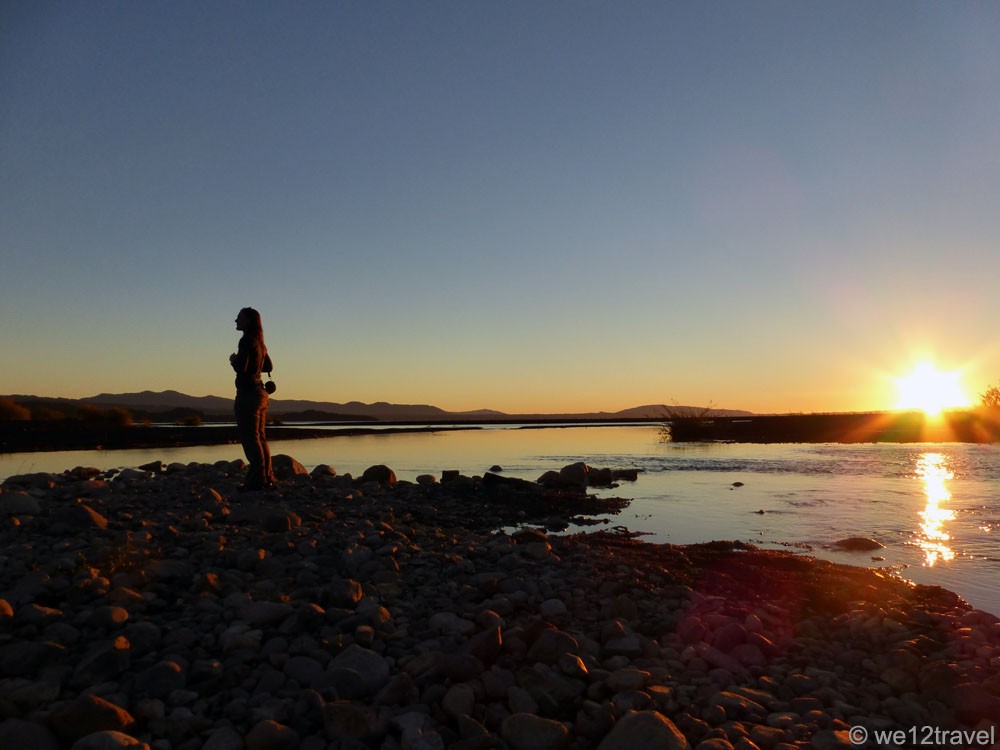 The next morning we woke up super early and we were picked up by the company, taking us to their office. Upon arrival we saw quite some other travelers, all with the same look of hope on their faces: “are we going up or are we not going up?” While we were all wondering, the lead guide made the decision to at least drive down to the bottom of the volcano and from there decide there whether it would be safe to attempt the climb. Upon arrival at the bottom we didn’t see a reason why they could cancel: there was almost no wind and the sky was blue. We were given the choice of taking the chairlift up or walk, however since I figured there’d be more than enough uphill hiking, we paid the extra Pesos and took the chairlift. 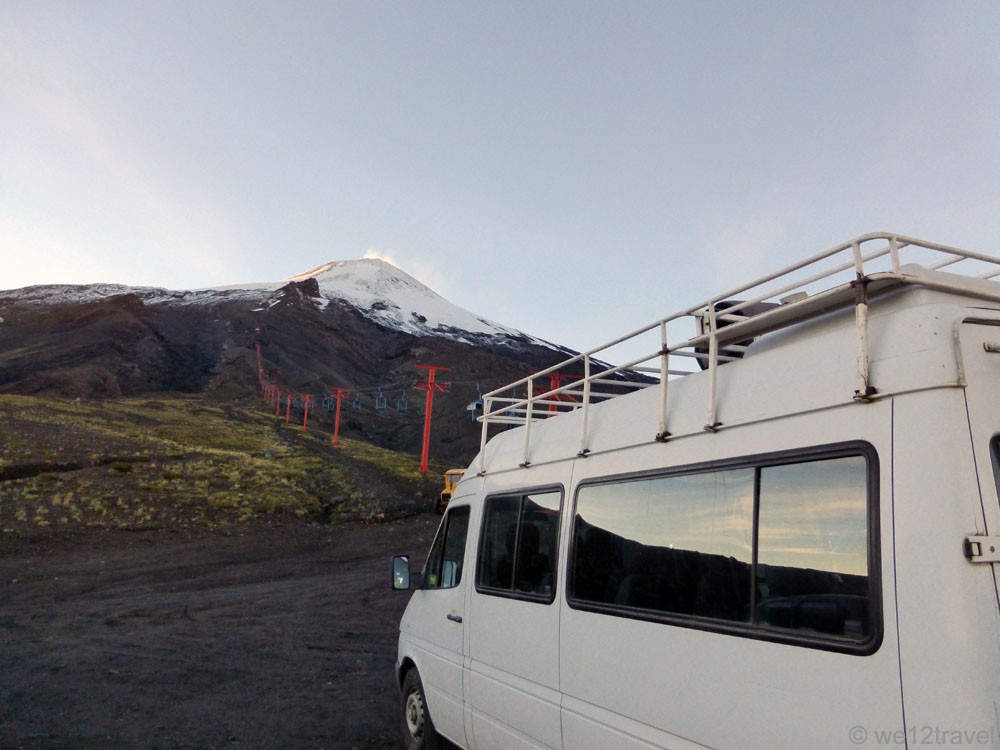 Upon arrival at the top, the guides looked worried. Was the climb going to be canceled after all? We knew we’d only have one shot that day but that day but also that the mountains are no joke and a small mistake could be fatal. More and more groups from various companies arrived at the top of the chairlift and eventually the decision was made to start hiking and see from there how we’d continue.

So off we went, in a swift pace to the point where we reached the ice. The uphill hike was taking my breath away, in both matter of speech and literally. The views were stunning, we could see all the surroundings and various other volcanoes in the distance. 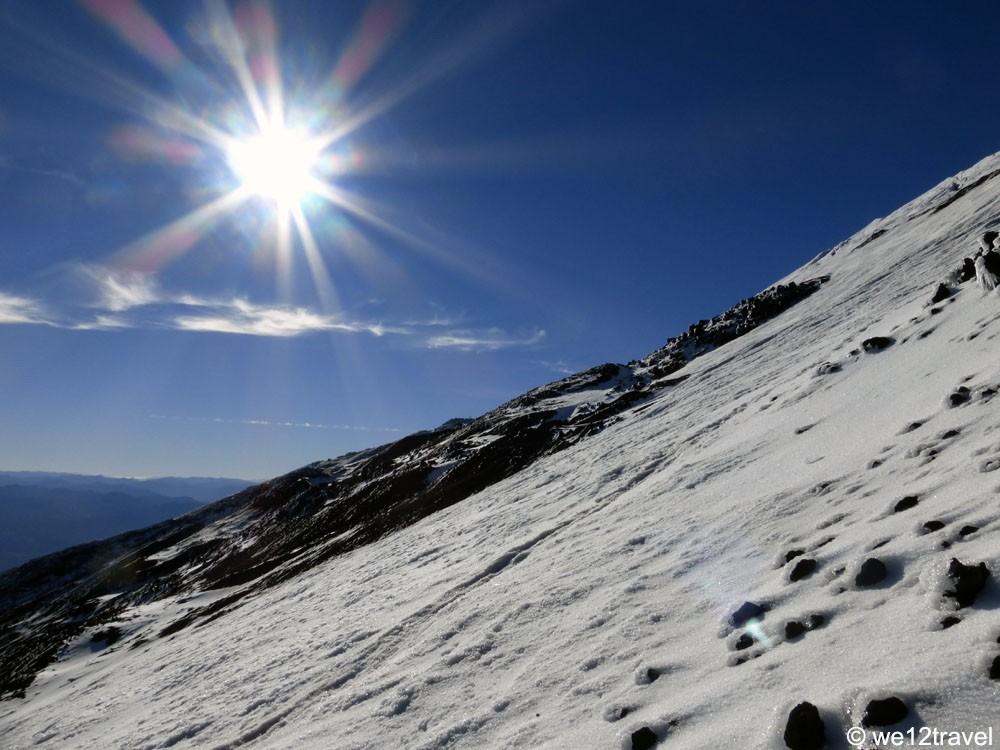 Then we reached the ice and were told to sit down and wait. The guides would go and check if it would be safe to continue. Everybody in our group looked nervous. Was it finally going to happen or would they have to wait another day or maybe longer (we spoke to people who had been hanging around in Pucón for almost a week just to climb Villarrica) and some people were even worried about losing their money because from that point on, there would be no refund. Guides from other companies went up and came back, shaking their heads. It was not looking good. Other guides told their groups to put on their crampons and that they would make an attempt.

Our guides came back from the ice after about 15 minutes. The look on their faces bothered me. While the first group left for the glacier, our guides told us that the ice did not look good and that it would be a hard climb. And that only strong people could come along, but that they would probably not get far and that the chances of reaching the crater would be low. That there would be no space for mistakes and that if we’d fall, we’d be dead. They ended their speech with “Basically, we are going up, because others are going, too.”

And that was the point I decided that I didn’t want to go. I did not feel comfortable with these guides who based their decision on other companies rather than their own knowlegde and experience. Mountaineering is something that should not be considered that easily. While Martijn has done various ice-climbing / mountaineering courses and knows how the handle an ice-ax, I don’t and I didn’t want to put my life in the hands of these guys. I wasn’t confident enough that I wouldn’t slip or fall and that I would be able to save myself if I found myself sliding down the glacier of an active volcano.

So Martijn decided to go along with the majority of the group while I decided to stay behind with some other folks. We saw one group after another go up and some came back quickly. Some others didn’t. While my group made their way back to the chairlift we saw plenty of people in the distance on the ice. It was a long wait and I had no clue if Martijn and his group would reach the top. Each time I saw people come back, I could see if they had reached the crater or not, a smile or a sad face. Most folks that came back didn’t make it. Then the first ones who did started to come back. It turned out that Martijn’s group had pushed on and eventually reached the top.

When I asked Martijn how it was he said: “It was smelly, beautiful and a pretty tough climb. It was dangerous and today was not a good day for those without alpine mountaineering experience. They probably should not have taken us up because if you would have fallen, you’d have been in very serious trouble.”

Here are some of the pictures that Martijn took. It’s truly gorgeous indeed. So next time I’m in Pucón (which I’m sure I will be because there’s still a lot left I’d like to see) I’ll try again, at least if the ice is in better condition. 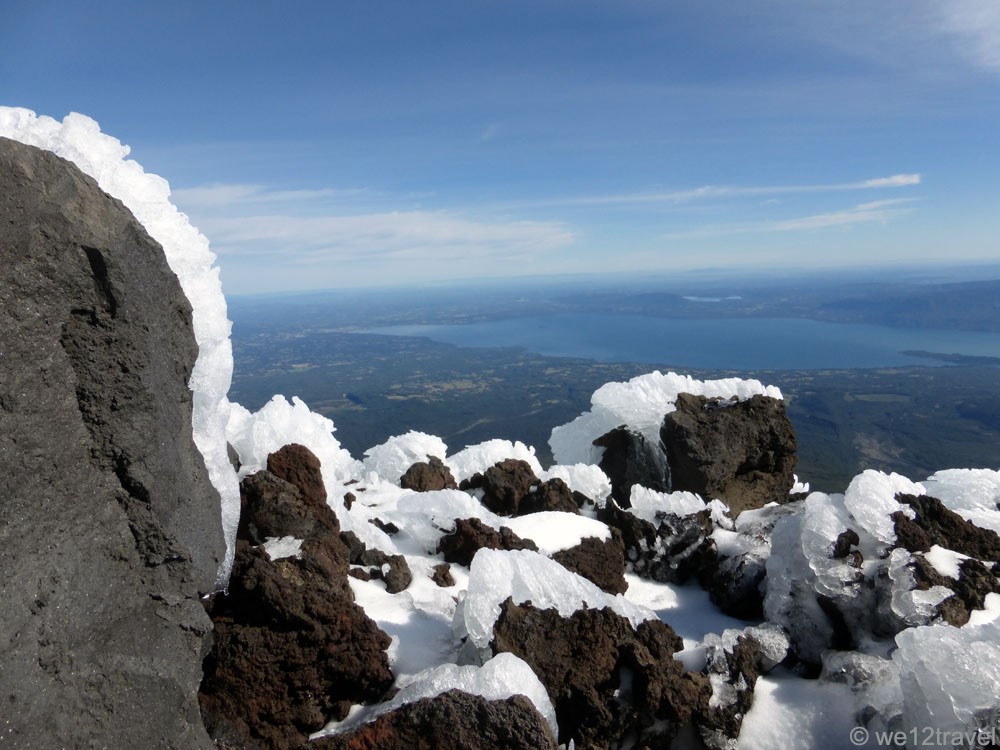 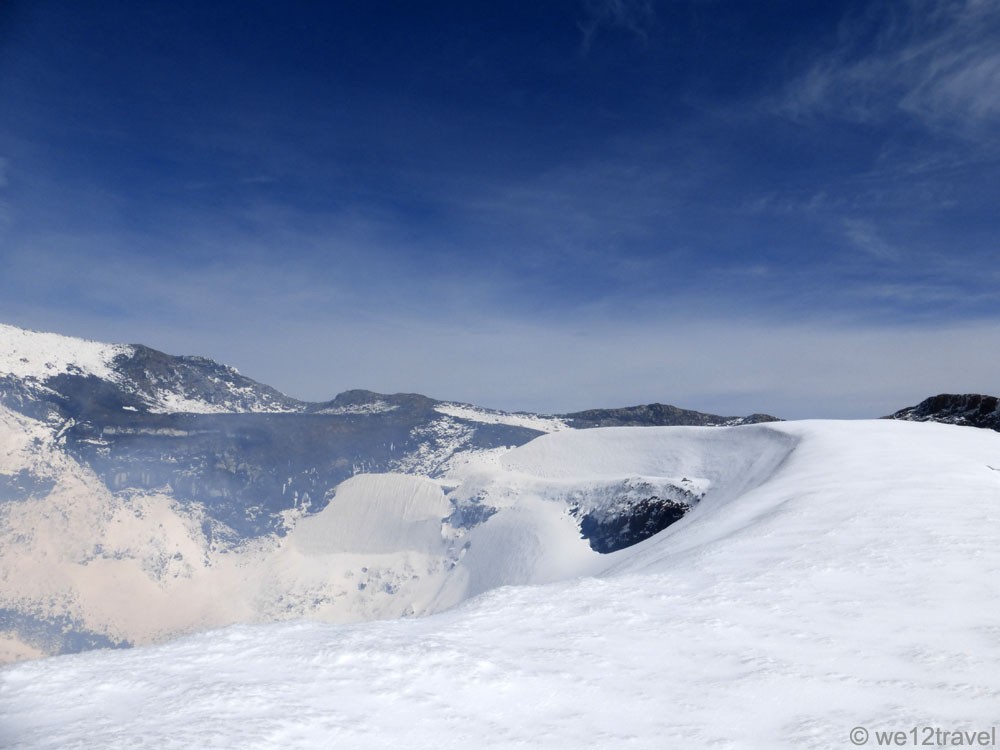 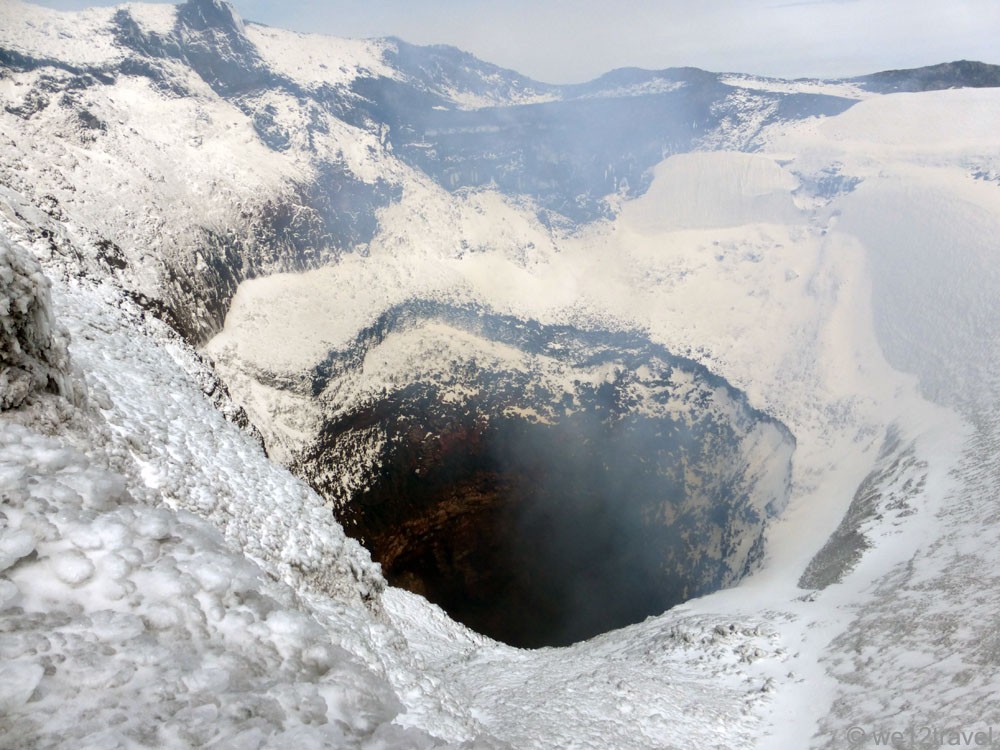 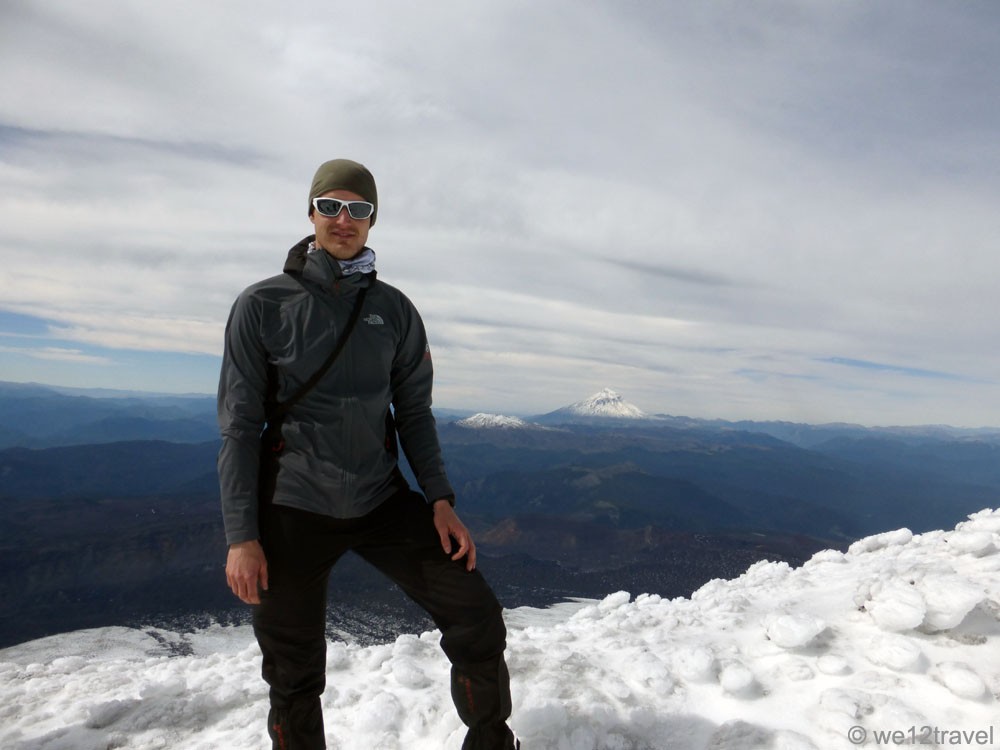 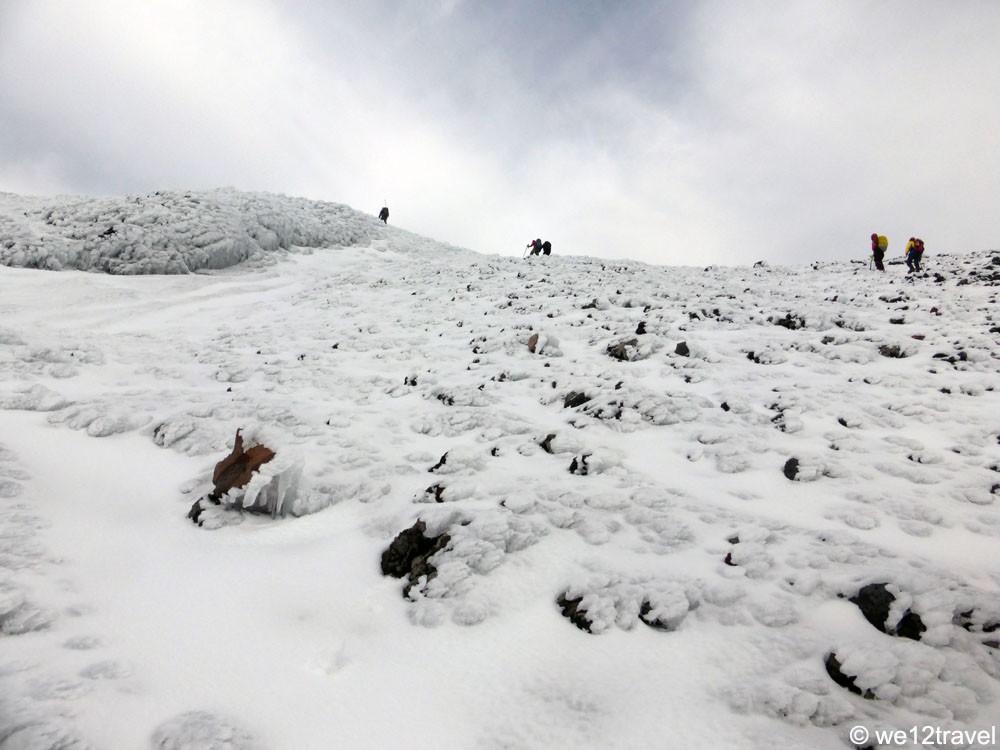 Sure, I was extremely sad that I had decided not to continue, but it was the best choice for me. Back upon arrival at the hotel I couldn’t help but checking out some reviews of the climb online and eventually, I found the story of some people who climbed in a group where 2 people died and some more got injured. I just couldn’t put my head around the fact why our guides would base their decision whether it’s safe or not to go soley on what others are deciding.

Luckily, there were still plenty of other cool things to do around town, such as hiking around in Huerquehue National Park , taking a plunge in one of the thermal pools (just make sure you get there before the big busses with the crowds do) and mountainbiking.

I’ve done some research because as you may know, Villarrica erupted a couple of months ago. Currently there are no hikes to the crater going because of the orange status in activity. As climbing an active volcano was still pretty high up on my list of things I wanted to do in life, I recently did a much easier hike up onto one down in Italy. So at least that kind of quenched my thirst for climbing a volcano…

In addition, I’ve decided not to mention the name of the company we went with because it’s not my intention to ruin their reputation. My opinion is only based on this one-time experience which I think they should have handled differently especially when it concerns going up an active volcano with unexperienced mountaineers…

Want to read more about our trip in Chile? You may like these:
– What to do on a morning in Puyehue National Park
– Hiking to Cochamó, aka the Yosemite of Chile
– Exploring the Petrohue Falls and River