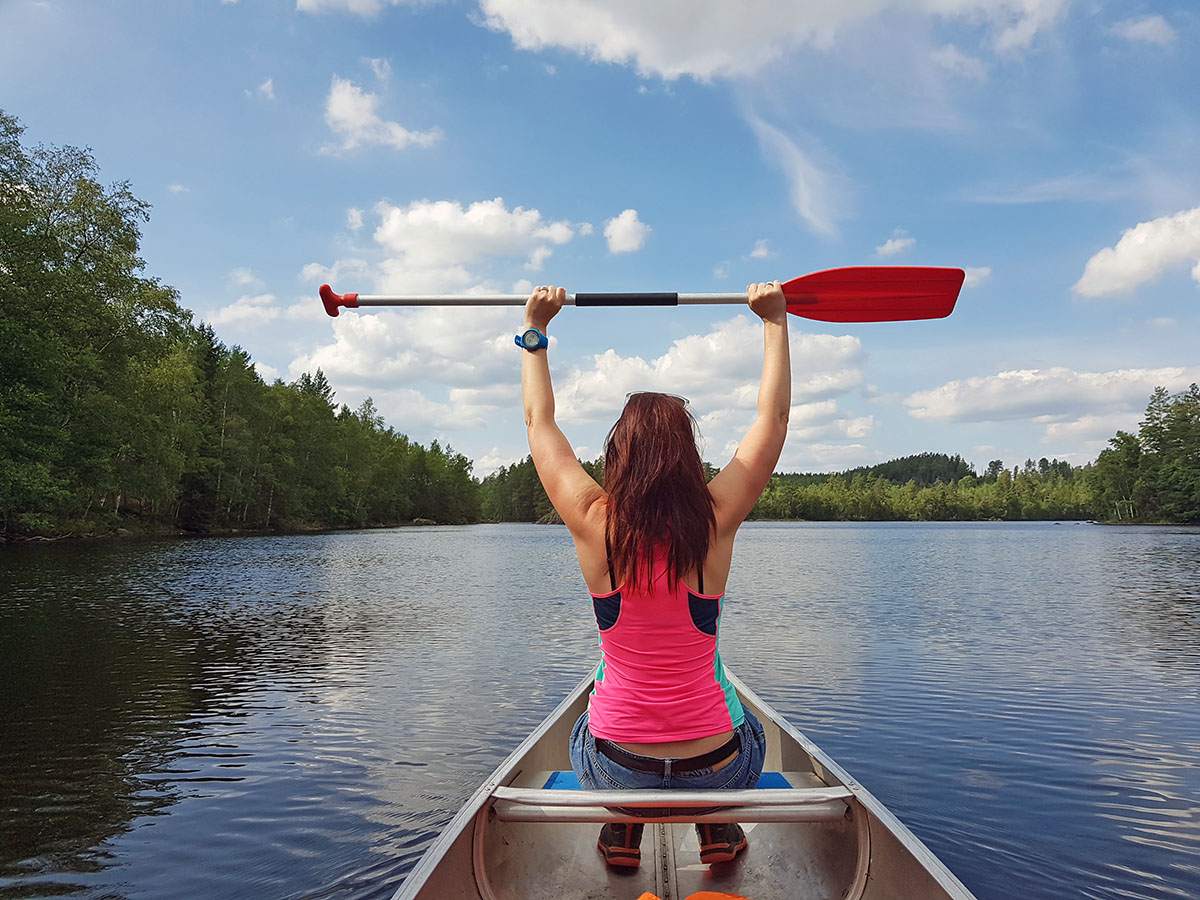 After my arrival and a first night in Hotel Sommarhagen in the Swedish Östergötland region it’s time to prepare myself for the reason I actually came here, which is camping in the Swedish wilderness. Camping in Sweden is quite different than camping here in Holland. At least, the way I’m going to camp that is. Here in Sweden they have the Everyman’s Right, which is all about the right to access Swedish nature. Wikipedia also calls it Freedom to Roam and in short it means you can camp anywhere you want, at least if you stick to a certain number of rules. The Swedes call this right the Allemansrätten and the specific rules and additional information about this amazing way to enjoy the outdoors, can be found on the Visit Sweden website.

Camping in the Swedish wilderness: the Everyman’s Right

Even though I usually would use the opportunity to sleep in a tent, my host Marianne has a better idea. She suggests that my travel buddy Saskia and I hike a section of the Östgötaleden, one of Sweden’s long distance hikes passing through the Östergötland region. Along the way we can camp in a small wilderness cabin. I could not find a whole lot about this hike on the internet, at least not in English, so I’m hoping to not run into too many people. According to Marianne this is certainly not something to worry about because it will be very seldom you will run into anyone else while out on the trail, despite the fact it’s in the middle of high season.

The good thing about this hike is that we’ll only have to carry a daypack with some water, lunch and things we need for the night. Food, water and camping gear will be dropped off in the cabin at Mortsjön, one of the many lakes in this part of Östergötland. We are given a self-made hiking map as well as a detailed description of our upcoming hike. A few moments later we get on the way and we’re leaving the Sommarhagen property. Soon after we are passing the first lake, which already looks very attractive for taking a swim. After this one the trail leads us through the endless woods, across small hills and along ancient rocks. After a few hours we arrive at Mortsjön and we easil find the cabin. As we take a quick look inside we find all the things we may need for the night: a bag filled with food, camping gear and paddles for the canoe. As promised by Marianne, we did not run into anyone while hiking, something that is rather hard to imagine in Holland during the summer. 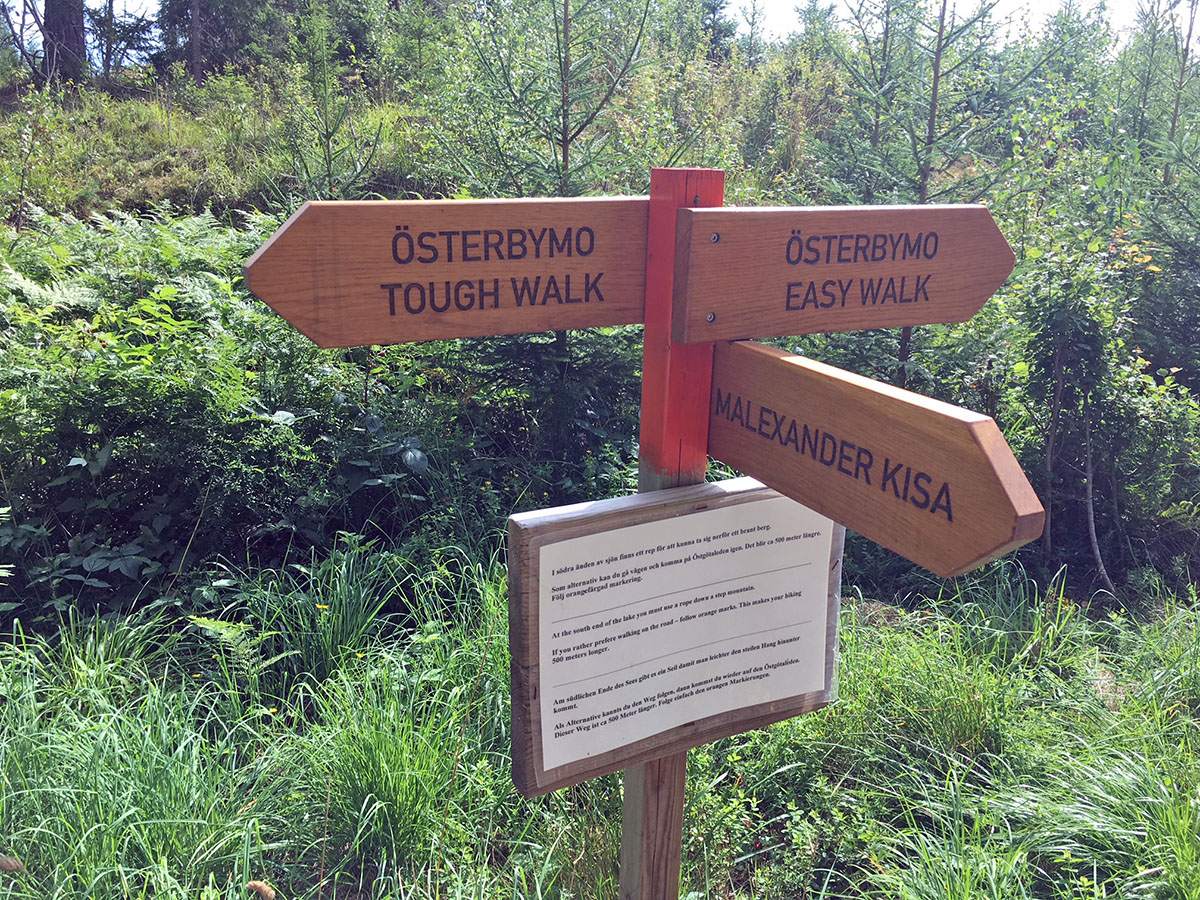 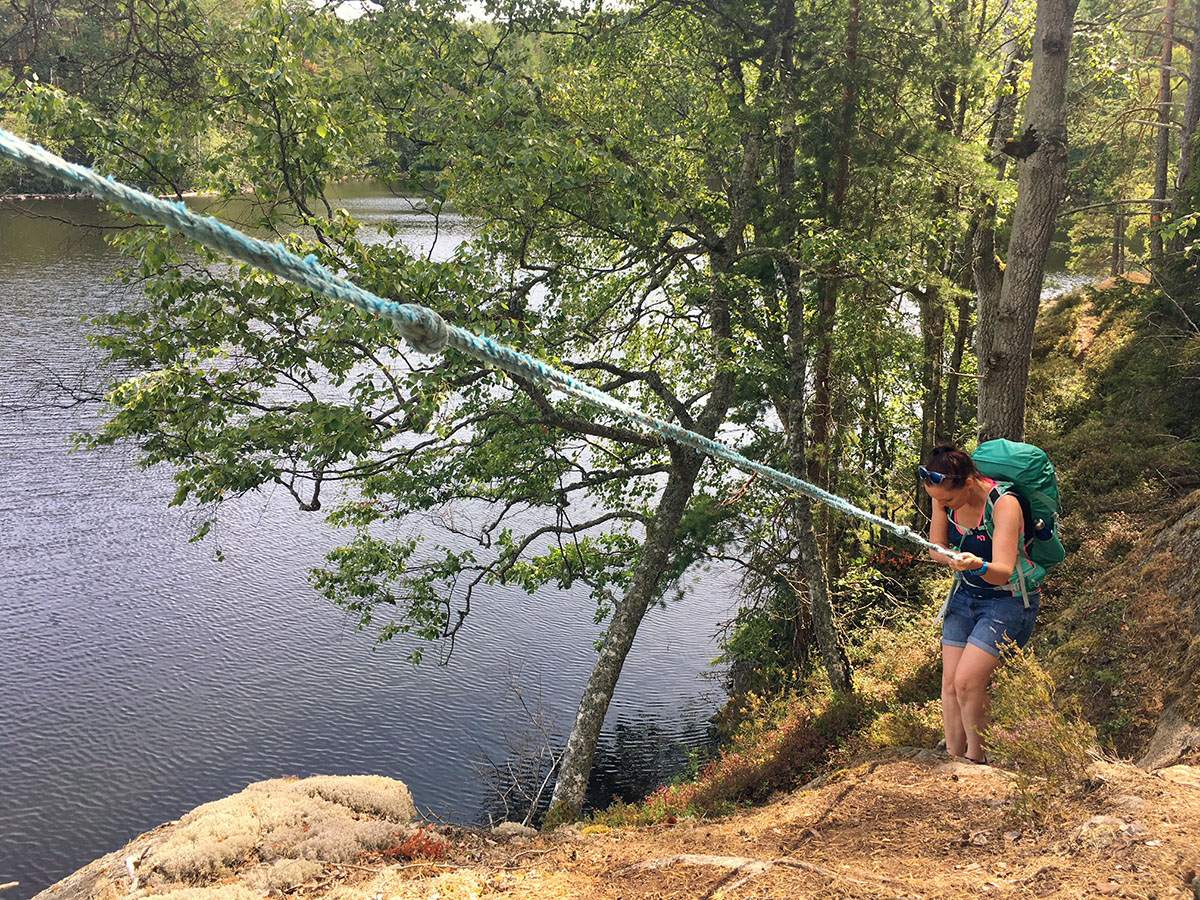 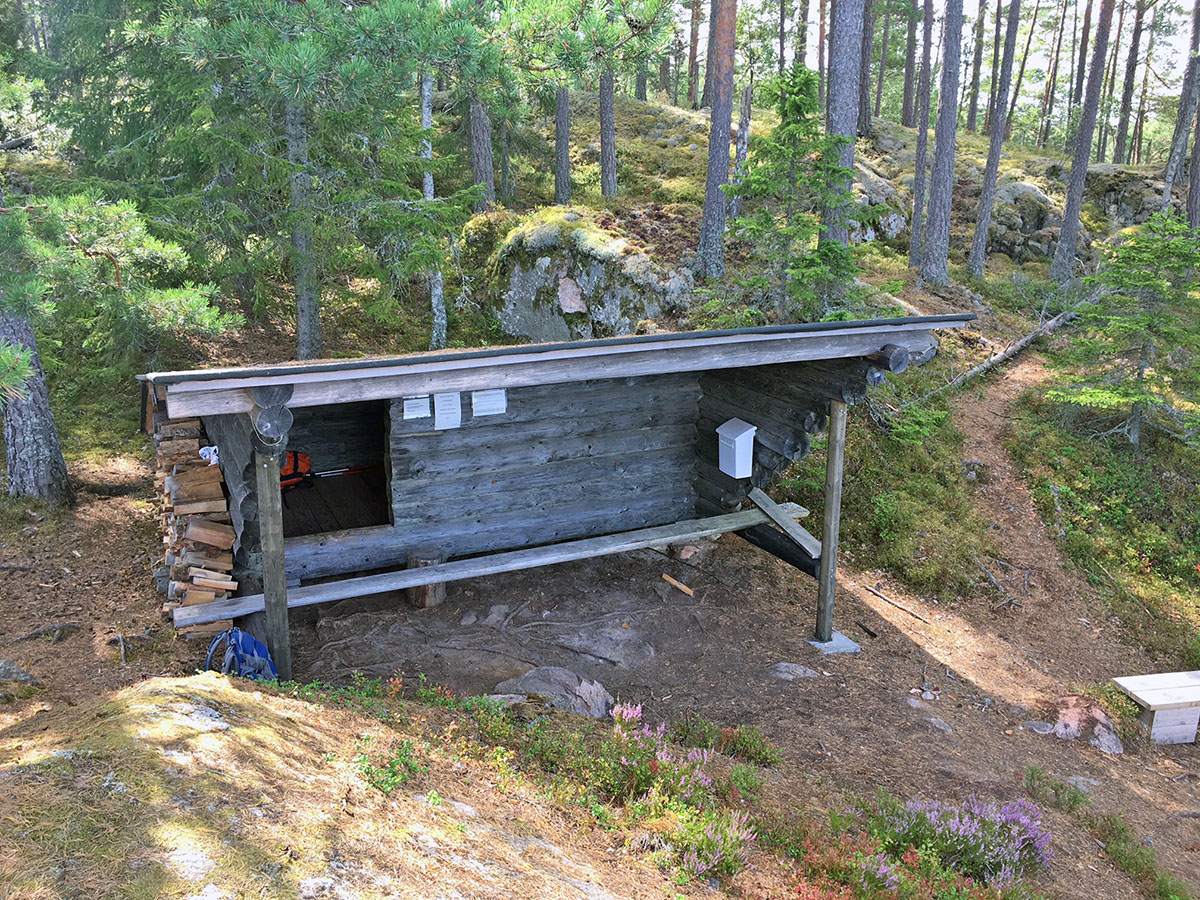 Upon arrival at the cabin, it’s time to prepare lunch. The cabin is located on a big rock, overlooking the lake and so it makes up for a great picknick spot. After lunch it’s time to relax for a while. We both find a spot in the sun and we soon notice the amazing silence that rules here. No cars, no planes flying over and more important: no other people. Just a very deafening silence. In a place like this it’s simply amazing to just be for a little while. To just lay down, close your eyes, leave your thoughts behind and just hear your own breath. 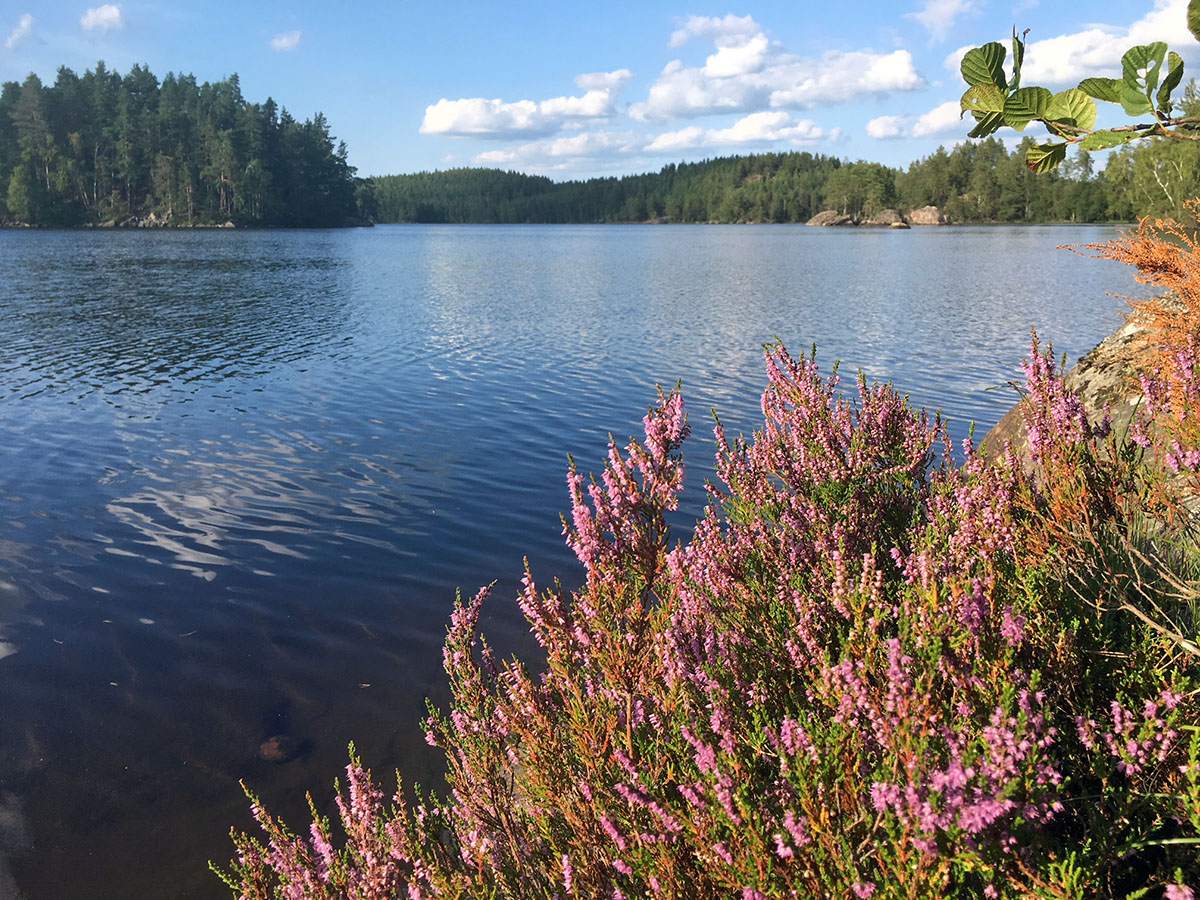 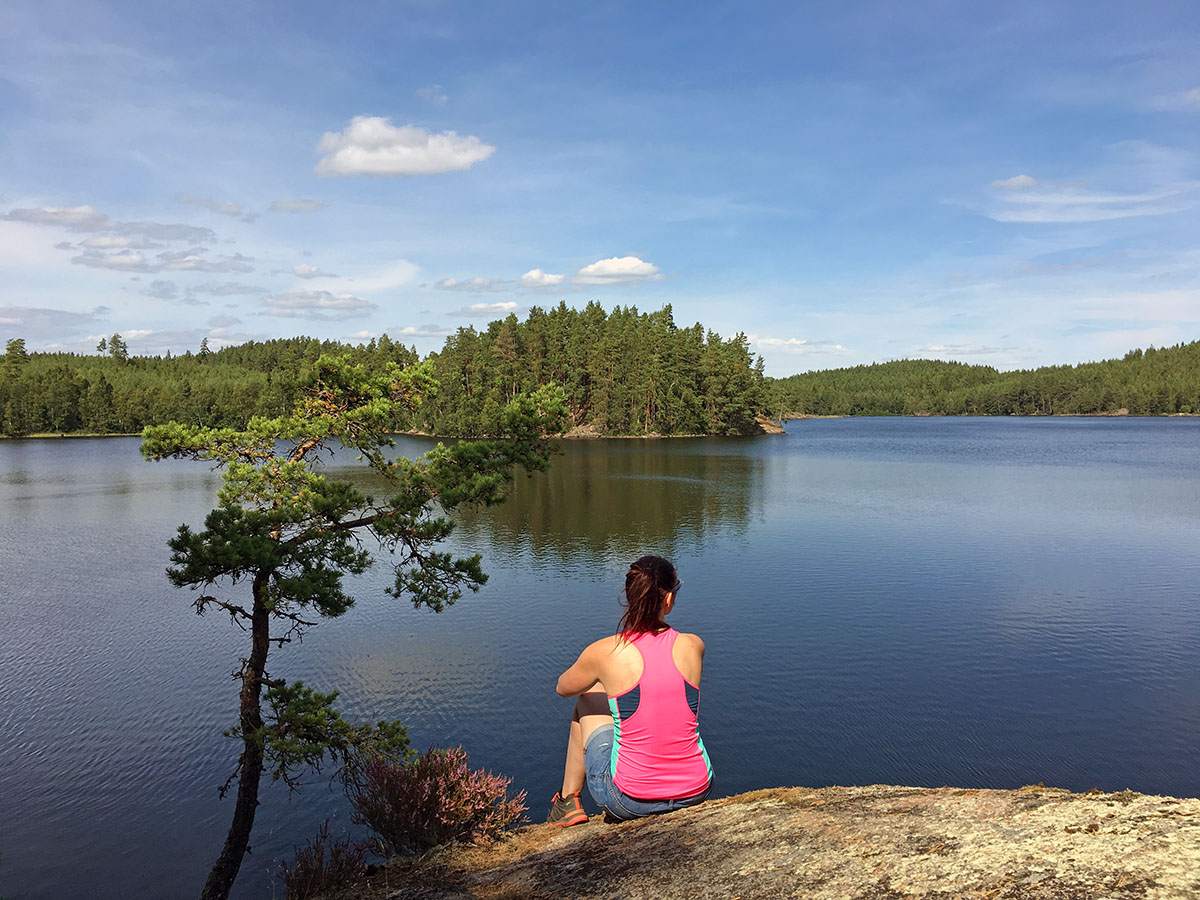 After being lazy for one hour and enjoying the silence, it’s time to get out onto the lake with one of the canoes. The canoe that’s owned by Sommarhagen is just a few minutes walking from the cabin and within moments we are out paddling on the lake. Me in front, Saskia in the back. The lake is not very large, yet we explore every corner of it. The small inlets, the islands and the shallow parts, where logs and lilies raise up above the water surface. After some one and a half hours the sun has disappeared from the lake and we decide to head back to our camp. Here we find another spot in the sunshine and we enjoy the last warm moments of the day. We have deep conversations about life, places like these make it so easy to go into these kind of conversations. It makes me relax and inspires me. 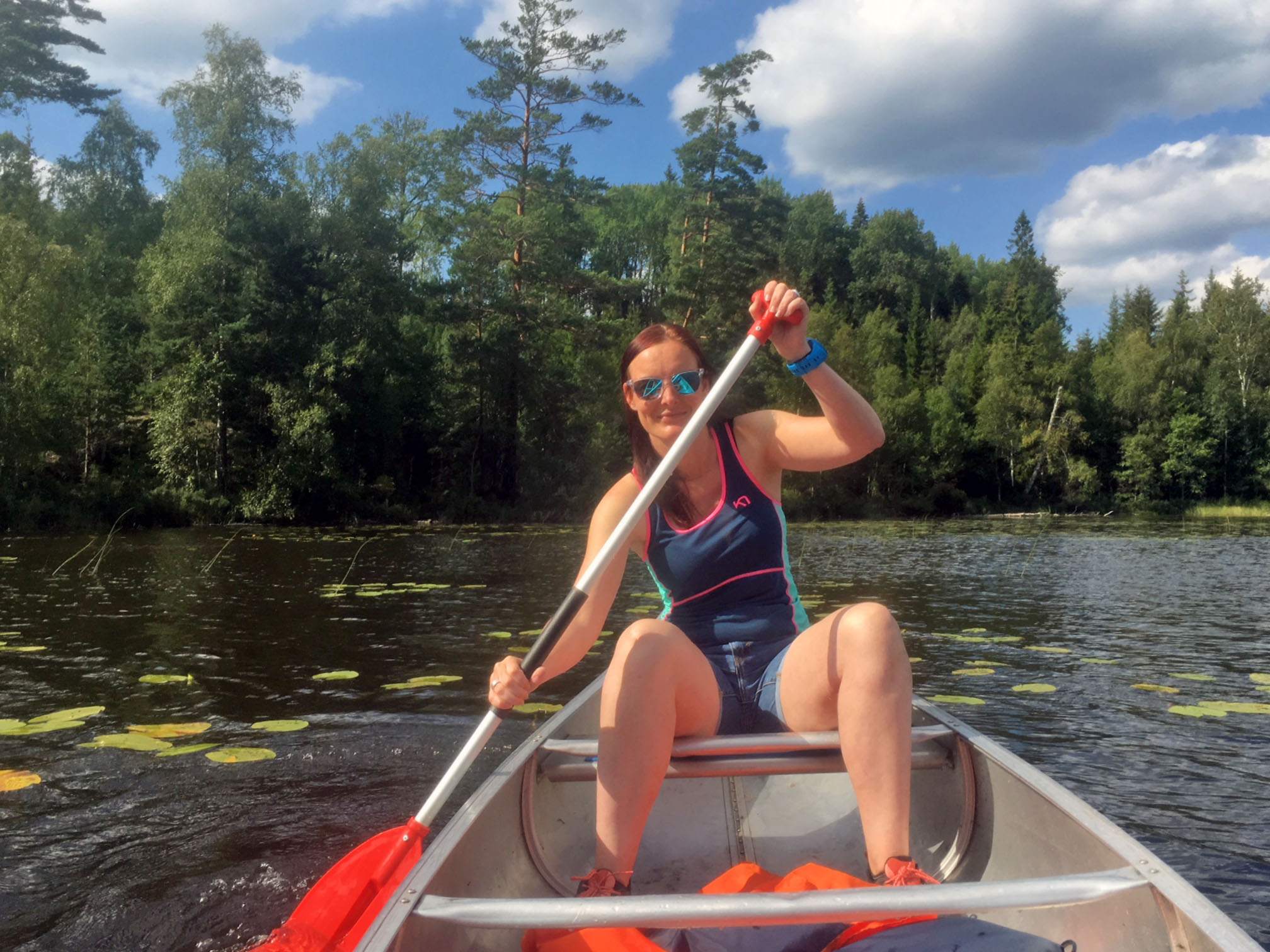 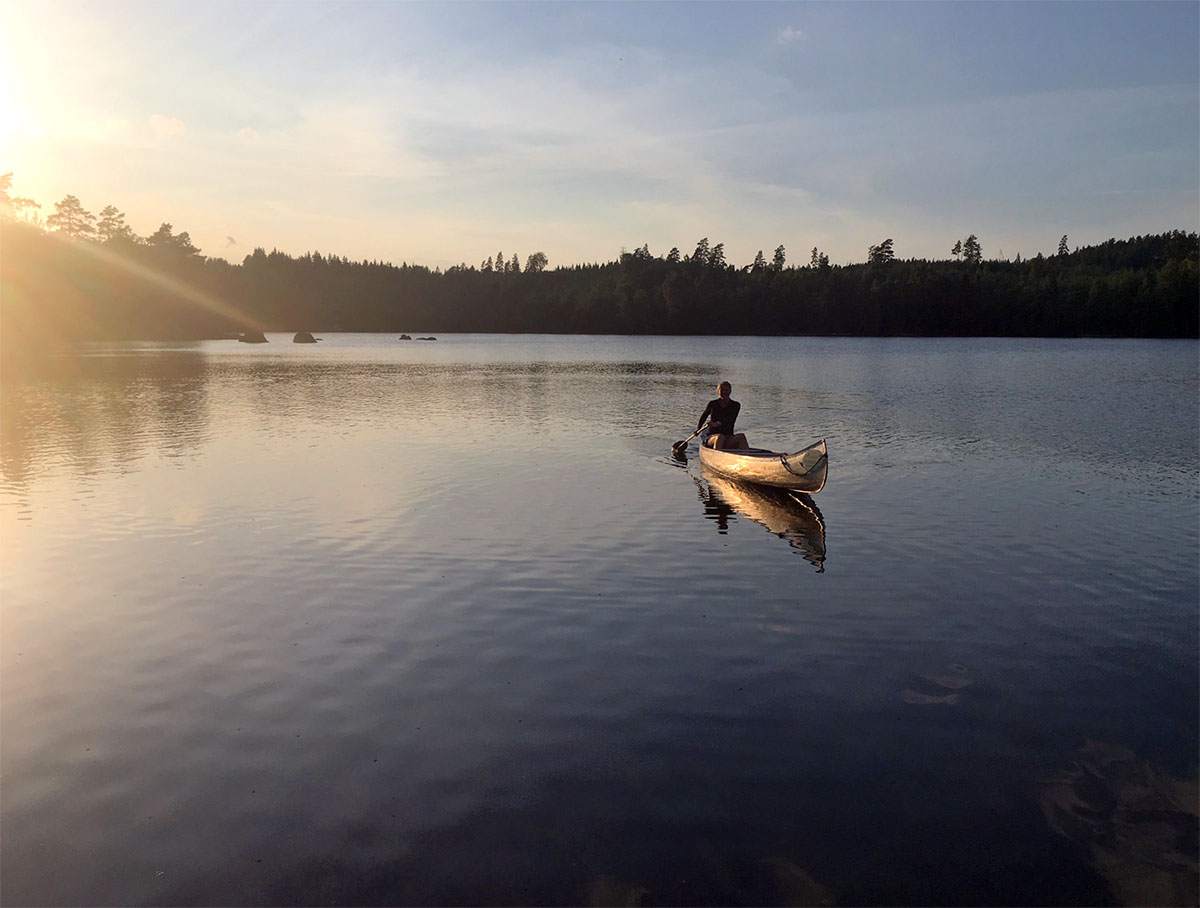 When the sun has finally set, it immediately cools down. We put on our long sleeves and decide to make a campfire. Even though we also have a small stove to prepare our sausages, putting them on the grill above the campfire is of course a much better way to prepare them. Saskia is a true star at making a fire from scratch and not a whole lot of time later the flames are shooting up into the open air. Together with some fresh veggies and some potatoe salad they make up for a great outdoor meal. After dinner we chat a little more and then decide that it’s time to head into bed. We roll out our mats and crawl into our sleeping bags. 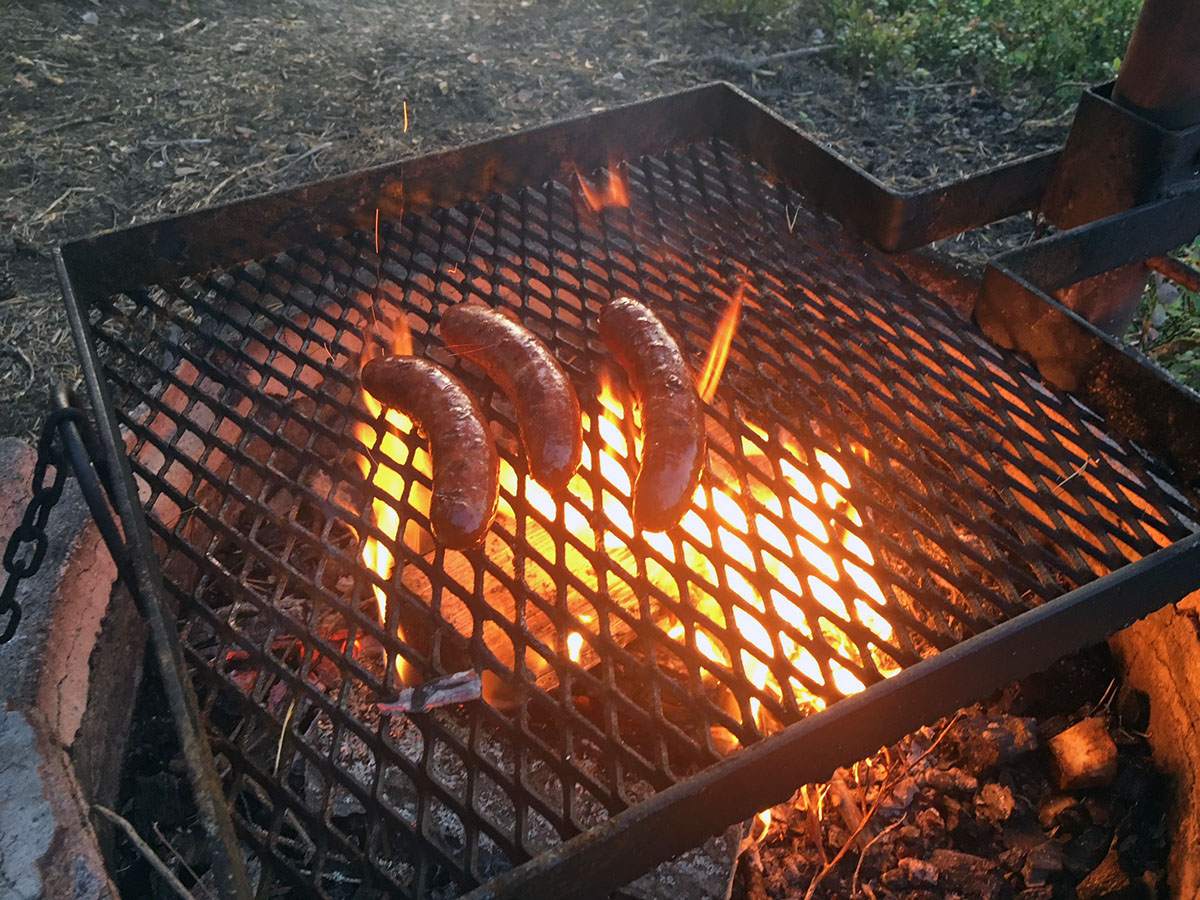 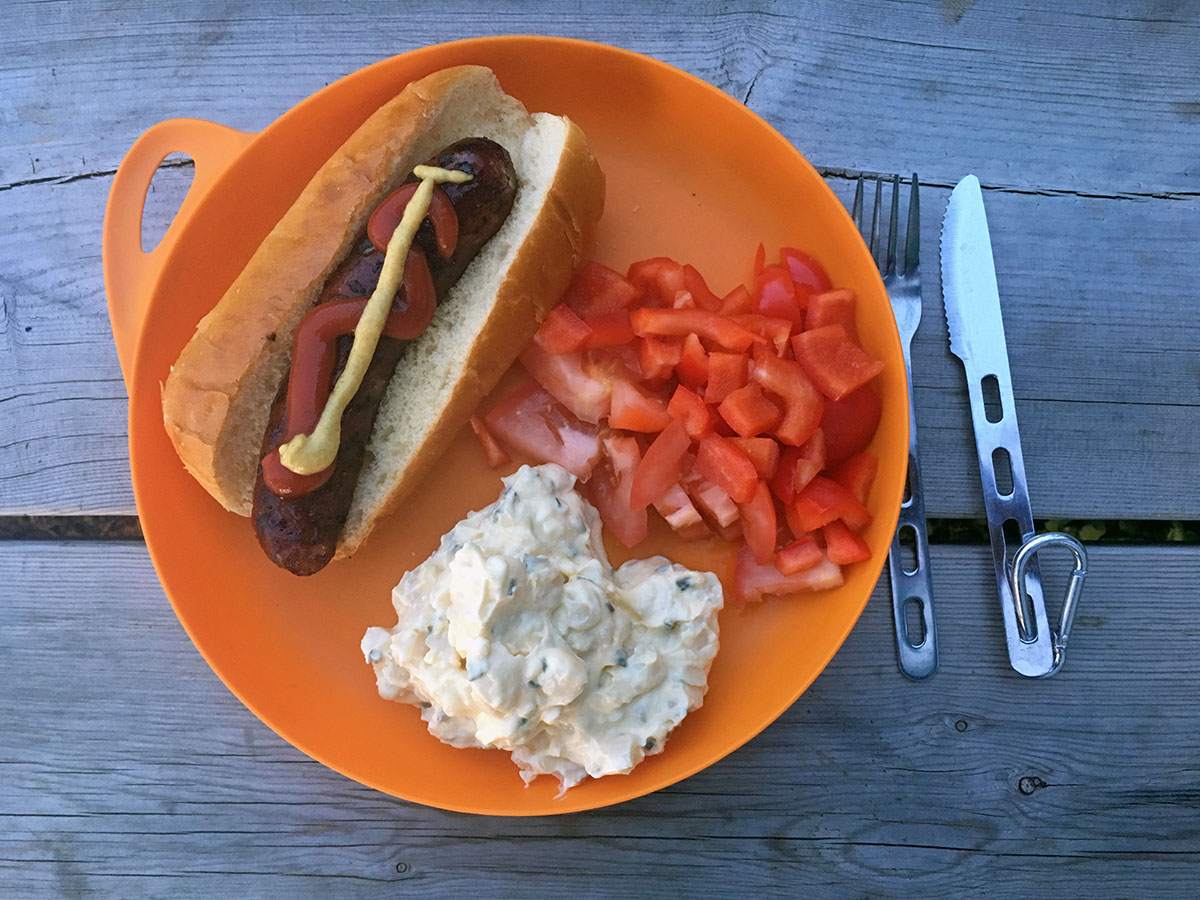 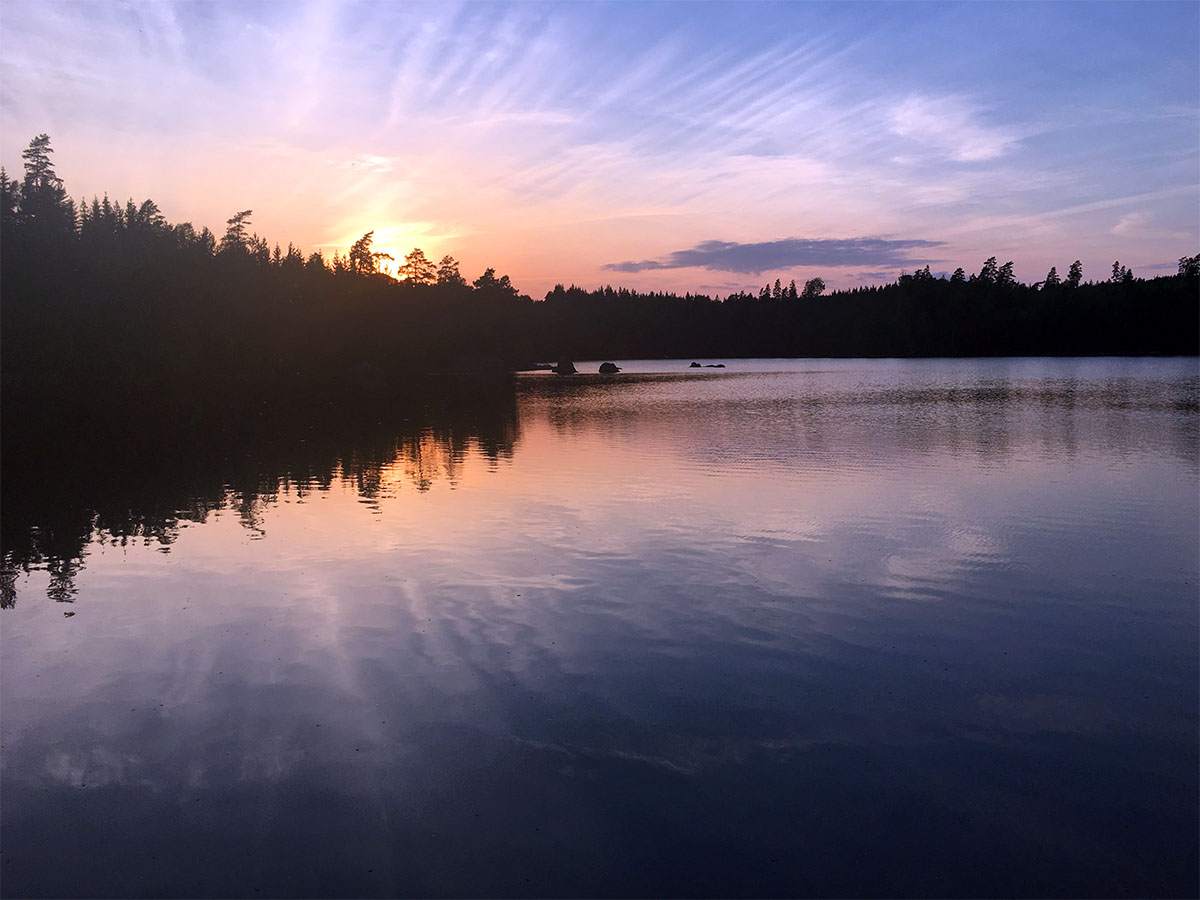 About that night in the Swedish wilderness

That night is a special one because sleeping in the outdoors does something to you. I sleep without waking up and that has no happened to me for quite a long time. I’m warm, can smell the afterglow of the fire and within no-time after crawling into my sleeping bag, I fall into a long and deep sleep. The next morning the weather has turned and a thick layer of clouds covers up the sky. At first it’s raining but half way during the morning it stops and so it’s time to head back to Sommarhagen. We pack all our gear, leave everything behind as we found it and walk back to the land of cars and wifi, one extraordinary experience richer. 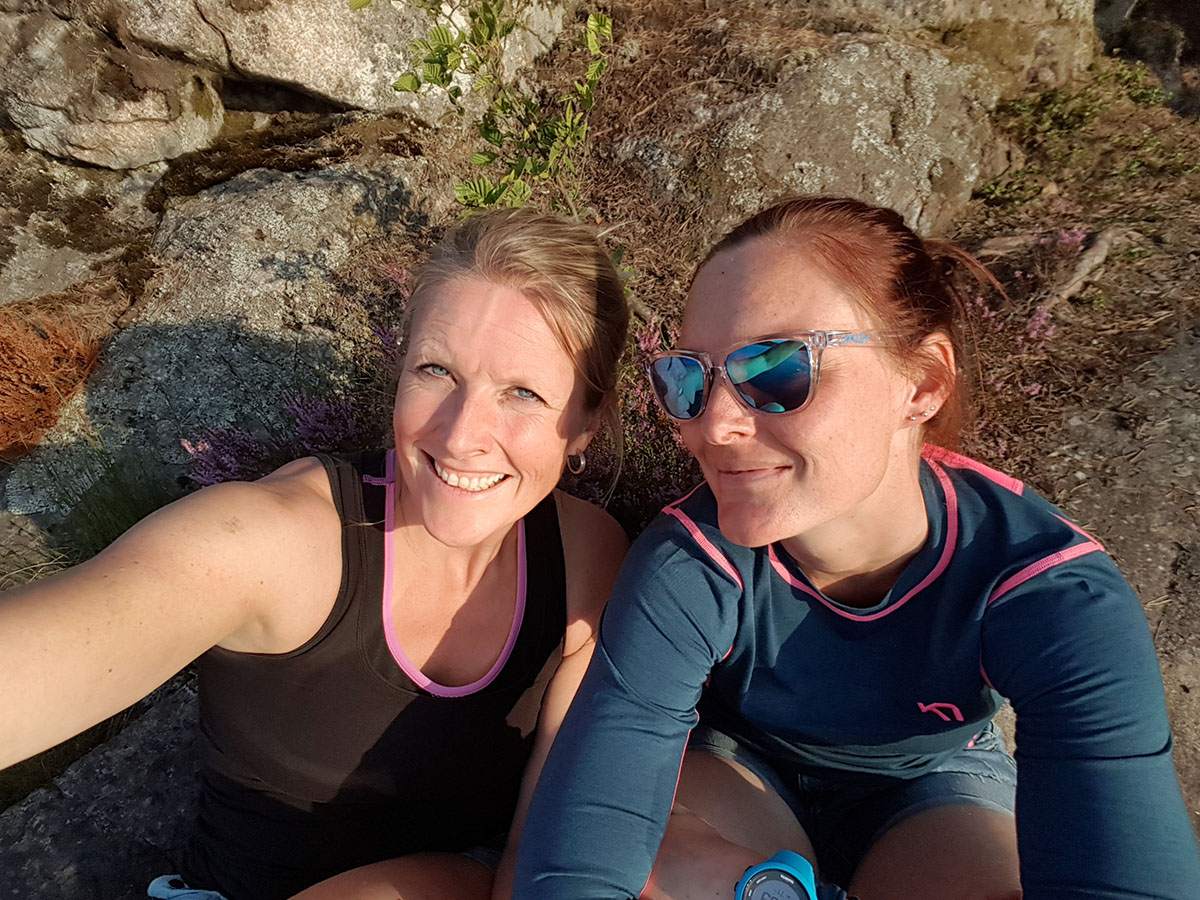 Curious what it’s like to go camping in the Swedish wilderness without having to buy all the gear? Marianne of Hotell Sommarhagen offers a large variety of options to experience a night the way we did. This way you won’t have to carry a large pack and the hike was not too strenuous, making it very accessible for anyone who wants to give experiencing the Swedish outdoors a try. In case you don’t like it or want to be picked up, you can walk to a gravel road a few steps away from where you can call Marianne.

[I was invited on this trip by Visit Sweden. All options are, as usual, nothing but my own.]