Oh boy, it was a challenge, at least for me. I cycle quite a bit back and forth between home and the office I work at but that’s usually just around 45 minutes a day. The biggest challenge in that ride is crossing the bridge over the Rhine, which is, after doing that at least 15 times a week and 7 years in a row, not really a challenge anymore. Martijn cycles a lot more than me, he likes to go mountainbiking in the woods and gives spinning/rpm classes at a gym. Needless to say I was a little nervous before embarking on this big adventure. Was I going to be good enough? Would my legs still want to do this after more three days? How would my bum like sitting on a saddle for 8 days in a row? Would I miss hiking?

Biking in Tasmania was a lot of fun. Other than some cycling trips around the area we live, which is flat, we never really did a cycling trip, but we loved it! Here’s our most important lessons learned and some advice for you if you are considering biking in Tasmania, too:

There are mountains in Tasmania

Although I knew it wasn’t going to be The Alps, I also knew that there would be quite some mountain challenges in our cycling trip. Crossing the mountain range from the central area to the coast wasn’t always easy but never impossible, either. However, we never, not for one single moment, experienced a whole flat kilometer. Just so you know, it was either up or down. There are a lot of hills in Tasmania and they will make your legs burn. Even if you’re cycling along the coast, like we did, your legs will be in pain.

The roads are narrow

We didn’t really notice while cycling, but I have to say that Tasmanian roads are extremely narrow at many points, even though it’s generally the ‘highway’ you’re cycling on. While roadtripping by car later on during our trip and backtracking parts of the route we cycled, we often wondered ‘did we really cycle here?’ as the road was barely wide enough for two cars to pass each other. We always made sure to use the road well and not cycle all the way to the side, to make ourselves seen. We never had any issues with that, most cars would pass us with the recommended 1.5 meters between them and us. Only a few jerks actually drove right by us but generally speaking, Tasmanians and people travelling in Tasmania are very willing to share the road. 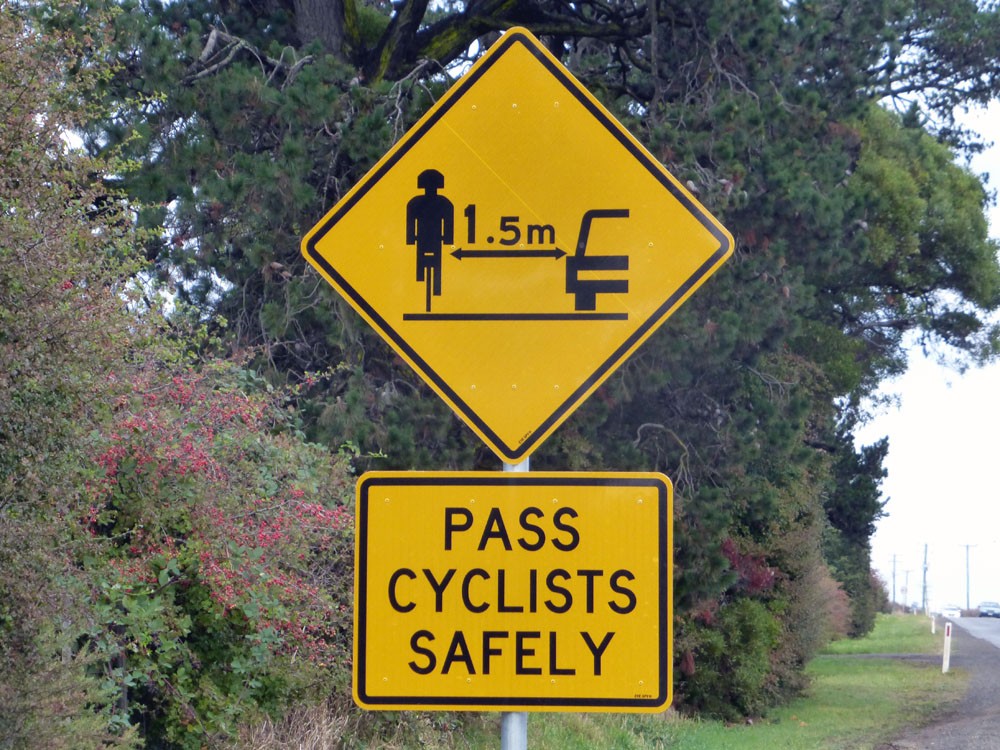 Although Tasmania claims it’s biker friendly, there hardly are any cycle lanes and if they are present, expect them to just end anywhere without indicating where you should continue your journey. We experienced this mostly around Hobart, where cycling all of a sudden became a risky business with big amounts of traffic. If you want to cross the Tasman Bridge into the city: good luck!

It may sound simple but don’t forget to stay on the left side of the road. As we’re from The Netherlands, where everything happens on the right side, this sometimes was a bit of a challenge for us. We would generally remember to stay left but occasionally it would happen we’d end up on the right side, most of the time when there was no other traffic and our routine kicked in. Luckily, one of us would soon enough realize we were on the wrong side of the road and scream ‘keep left’! No accidents occurred so it went pretty well.

A helmet is mandatory

In The Netherlands, nobody uses a helmet unless you are on a racing bike or mountainbiking in the woods. Having to wear a helmet full time was something I had to get used to. Especially on warm days when I was sweating like a pig when cycling uphill, I felt like taking it off to cool my head down. When returning our bikes back to the agreed point in Hobart, we didn’t wear our helmet for the 5-minute ride and immediately people in the traffic started yelling at us ‘wear a helmet’. We didn’t think it would be so much of a deal, but apparently, the fines for not wearing a helmet are pretty high. So even if you are vain and you hate to have ‘helmet hair’ each night, better be safe than sorry and wear the damn thing. 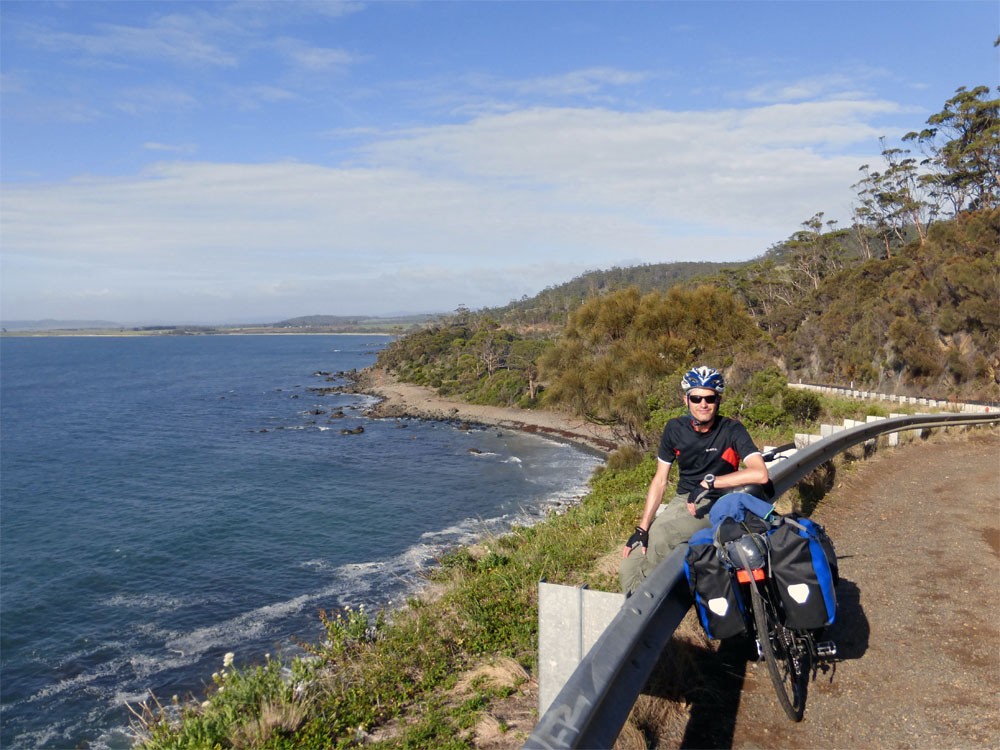 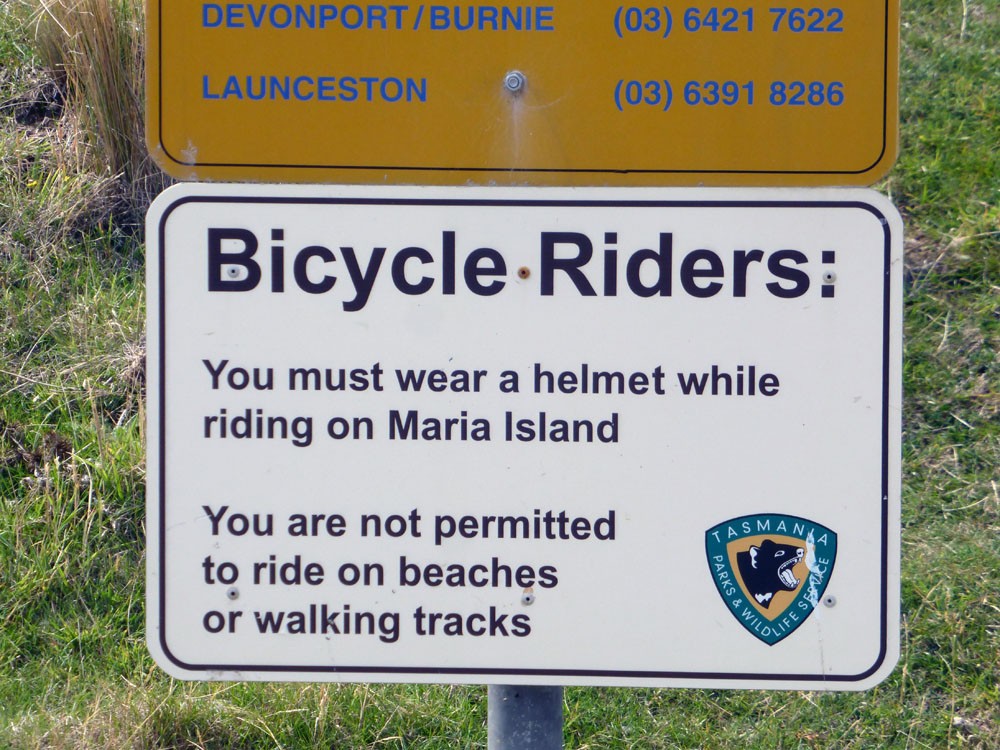 There’s dead animals all over

One sad thing to take into consideration are the dead animals that are next to the road. And they are a lot. Mostly kangaroos but also wombats, possums, birds, snakes and other reptiles. At some point, we’d see a dead animal every 100 meters and it made me sick, especially when they smelled really bad. Since the roads are narrow and traffic is plenty, you will often pass right by them. Not my favorite sight.

Make sure you are well visible

Weather is occasionally dark and gloomy in Tasmania, which makes it very important that you are well visible. As our back panniers are colored in dark shades, we tried to wear bright clothing all the time and we covered one of the panniers with a bright yellow raincover that was actually intended for one of our backpacks. If it would get really gloomy and/or misty, we’d put on tiny lights that we had attached to our helmets. In case you don’t have bright clothing or lights, we recommend you wear a bright colored safety vest. Not the most charming, but very useful for sure. 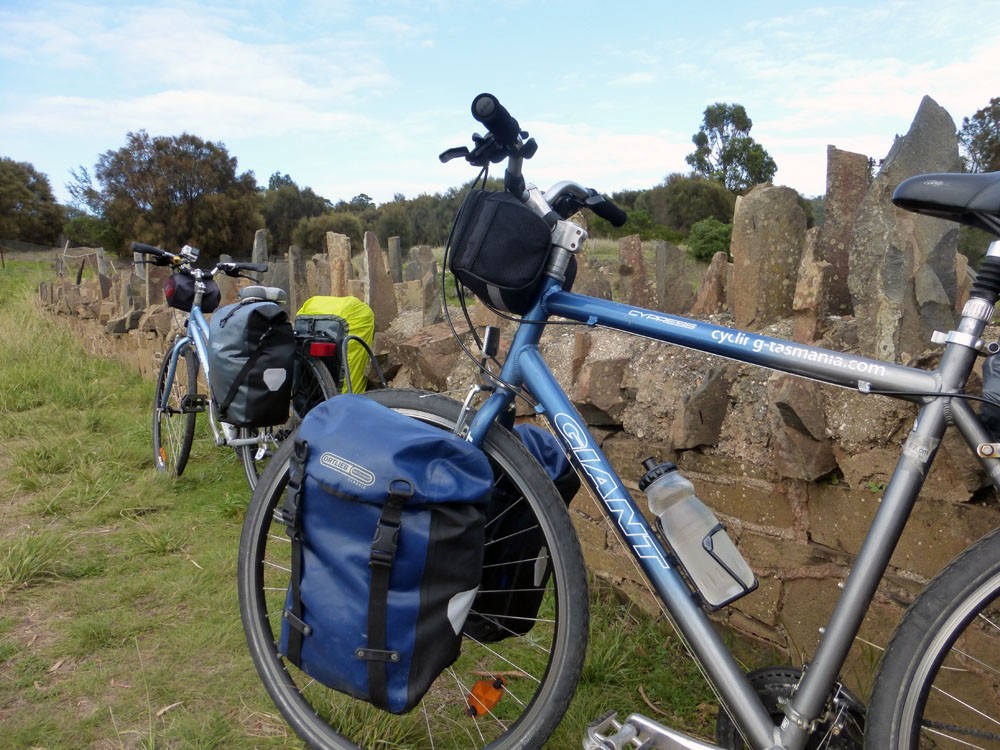 Although you will usually end up sleeping in a town or nearby one, it’s still useful if you have some basic knowledge about bikes and how to fix them. I generally don’t know much about them, but Martijn does, so when the chain ran off the pully within the first kilometers, I was happy he could fix it. Some days we would not see much more than a few farms and although Tasmanians are super friendly and will definitely help you out if in trouble, having some basic knowledge as how to repair a flat tire will be useful because bike shops are not really around the corner most of the time.

There are almost no shoulders

One last thing to take into consideration is that there are almost no shoulders so most of the time, you will share the road with other users, mostly cars and trucks. As I said before, most drivers are very considerate of bikers but you should always be aware and make sure you are seen. In case there would be a shoulder, that part of the pavement was generally in worse shape than the main road, so most of the time and if traffic allowed, we’d still end up on the road rather than on the shoulder. 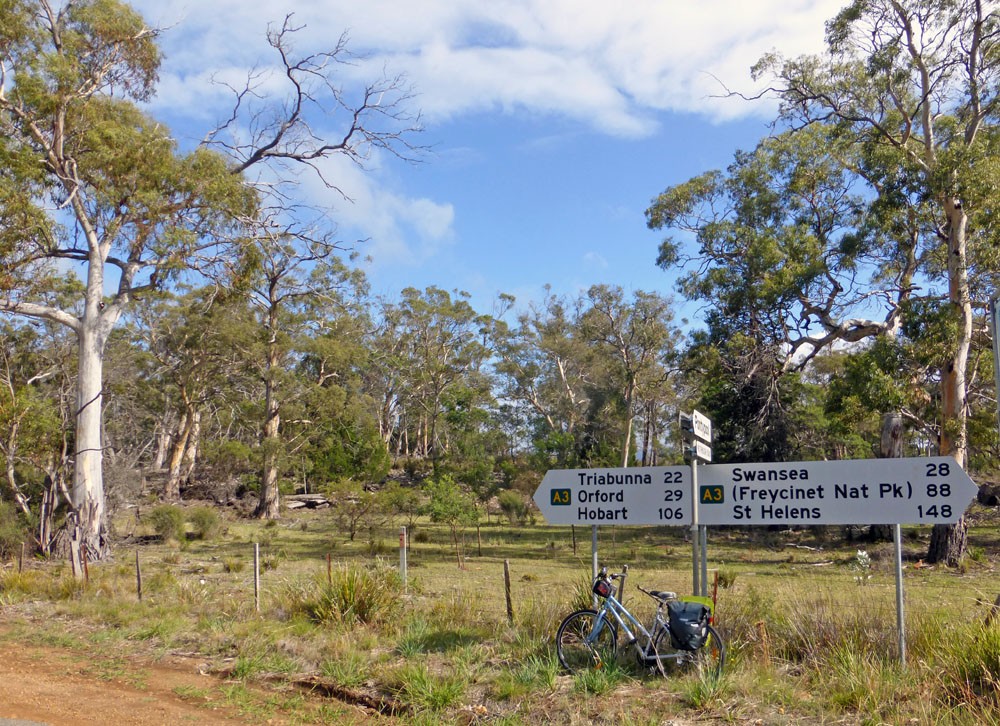 The ultimate route to biking in Tasmania

As I mentioned earlier, we cycled from Launceston back to Hobart. You can find a basic route for this on the Discover Tasmania website, however we decided to spice their route along the East Coast up a bit and add funky places such as Weldborough, Maria Island and Binalong Bay. Soon we’ll publish a post with our ultimate route to biking in Tasmania, so keep an eye out for updates.

For our cycle trip we teamed up with Bim Bim Bikes, a bike rental platform that can arrange bike rental in no less than 40 countries all around the world. Our bikes were provided by Green Island Tours Tasmania who not only rents out bicycles but can also arrange overnights and if necessary, luggage transportation in various parts of Tasmania.

Want to read more about our Tasmanian adventure? You may also like these blogs:
– Tasmania roadtrip: when the Nav said no but the map said GO!
– Live from Melbourne: bye Tasmania!
– Tasmania in pictures, week 2