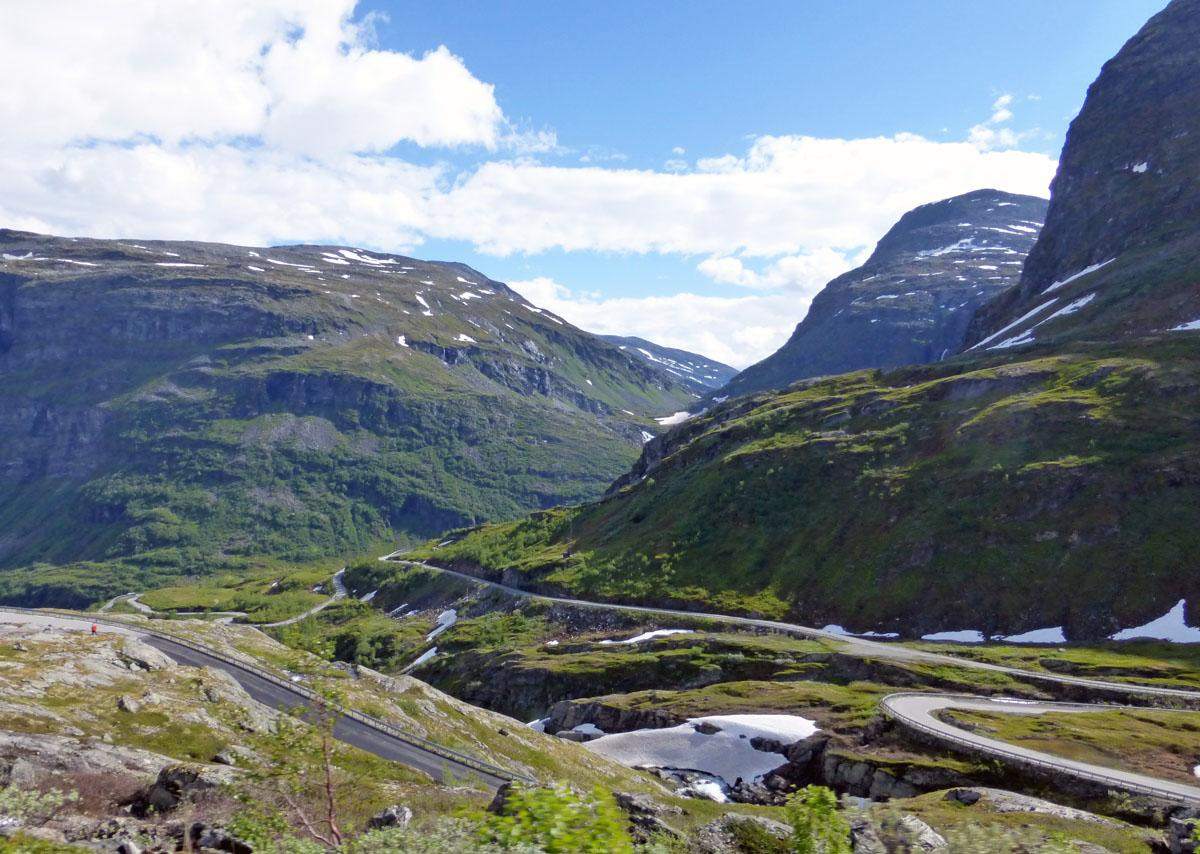 During Norway trip a few years ago, we decided to split up our trip in two pieces. We stayed at Nærøyfjord for a couple of days as well as in the Nordfjord area. Here, we were invited to stay at Strynsvatn Camping, an offer we gladly accepted. The way up from Fjord Norway to Nord Fjord (yes, we know it sounds confusing) led us through a truly fairytale landscape. We passed glaciers, crystal clear lakes and drove on high mountain rounds.


As some of the fjords in Norway are incredibly long, you will never be very far away from them. With a bit of sadness we left Nærøyfjord behind to travel further up nort, to the Nord Fjord area. We shouldn’t have been sad though because it became immediately clear that this region is just as stunning as we hoped for. After passing the southern glaciers of Jostedalsbreen we entered the Stryn region. The first views of the Nordfjord were stunning and along a windy road we made it down to sea level again. Here we had some great vistas of Innvikfjorden and we were happy to be back at the fjords again.


Upon arrival at Strynsvatn Campsite we felt comfortable straight away. The owners speak perfect English (such a perk of traveling in Norway) and showed us where to find our cabin. We stayed at a 4 person cabin, with great views of the Stryn Lake right in front of us. After settling in we wanted to go for a hike but instead ended up chatting with our German motorcycle neighbours. Eventually, at about 10pm we decided it was time to get some rest, we had been on the way a full day and were pretty tired. 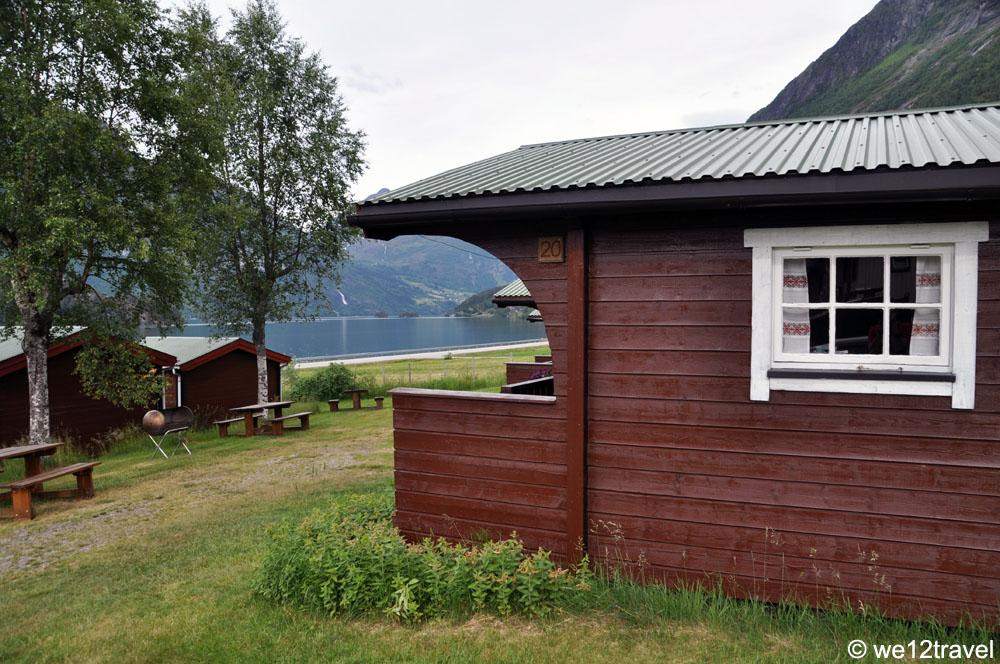 The next day we decided to head out to Strynefjellet and do some sightseeing. In town we heard that Strynefjellet would be open but unfortunately, it turned out to be closed as it still was too early in the season. So instead, we took route number 15 and drove out to Geiranger, one of Norway’s most famous towns. Which we will also write more about later…

Despite the weather not being awesome, the drive was still incredibly stunning. Over some steep zigzags and along Oppljosvatnet we eventually reached national road number 63, the way down into Geiranger. Along the way, the dramatic landscapes reminded us of what we had come to Norway for: nature in its most inspiring way. Frozen lakes were surrounded by snowcapped mountains and only here and there, a sign of spring showed itself to us. We ran into a Dutch guy who had been traveling around this area in his camper for weeks and had been exploring this particular area by foot. How he did that we wondered about as most of the trails were still covered in a thick pack of snow… 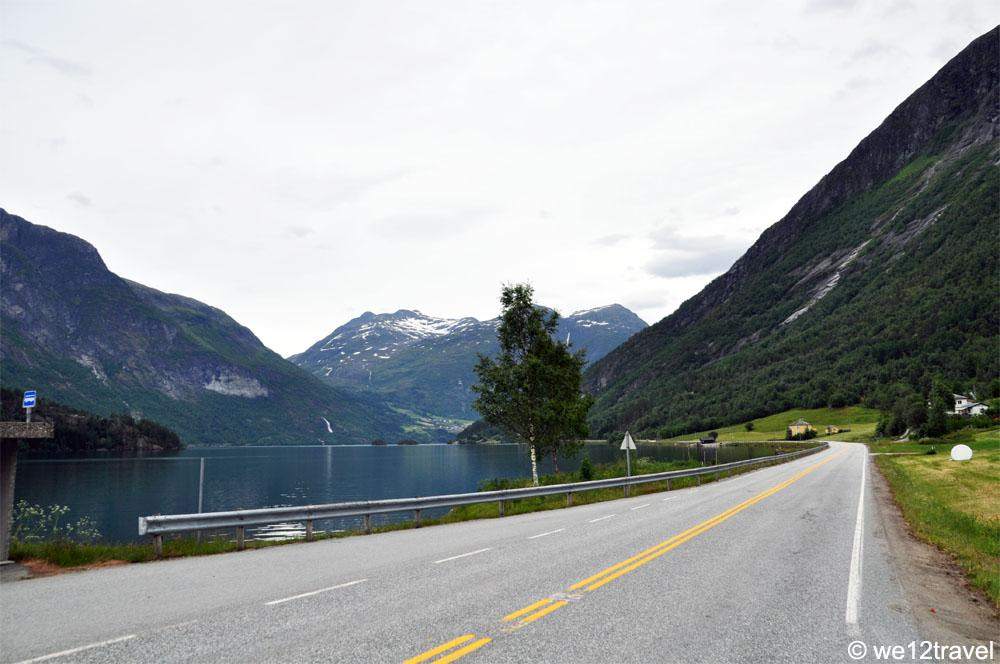 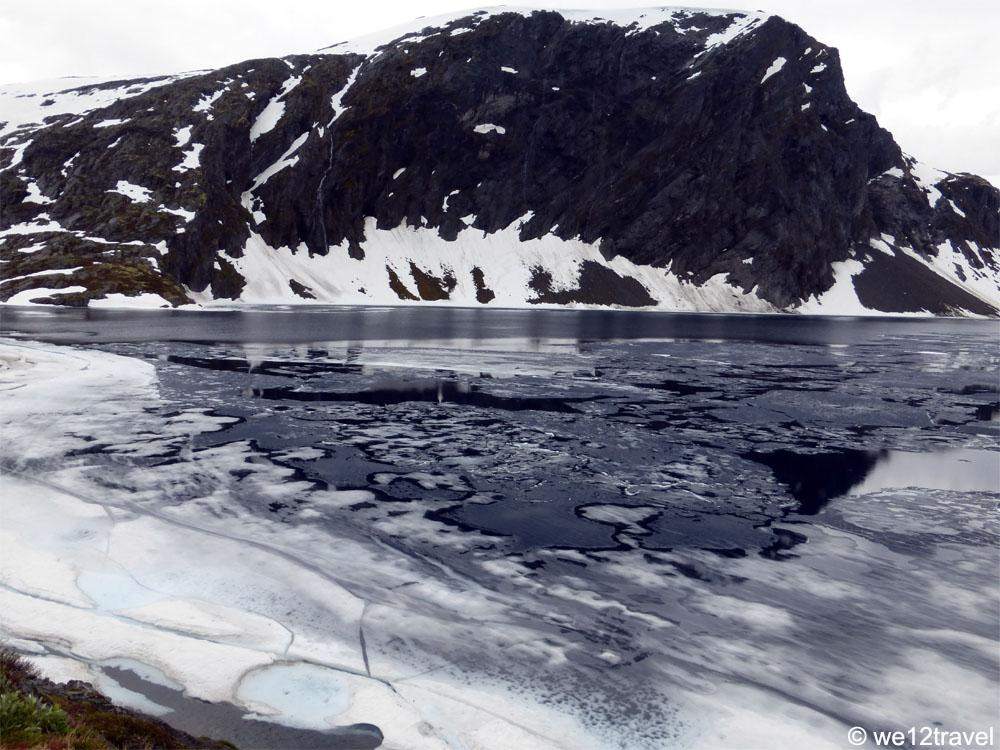 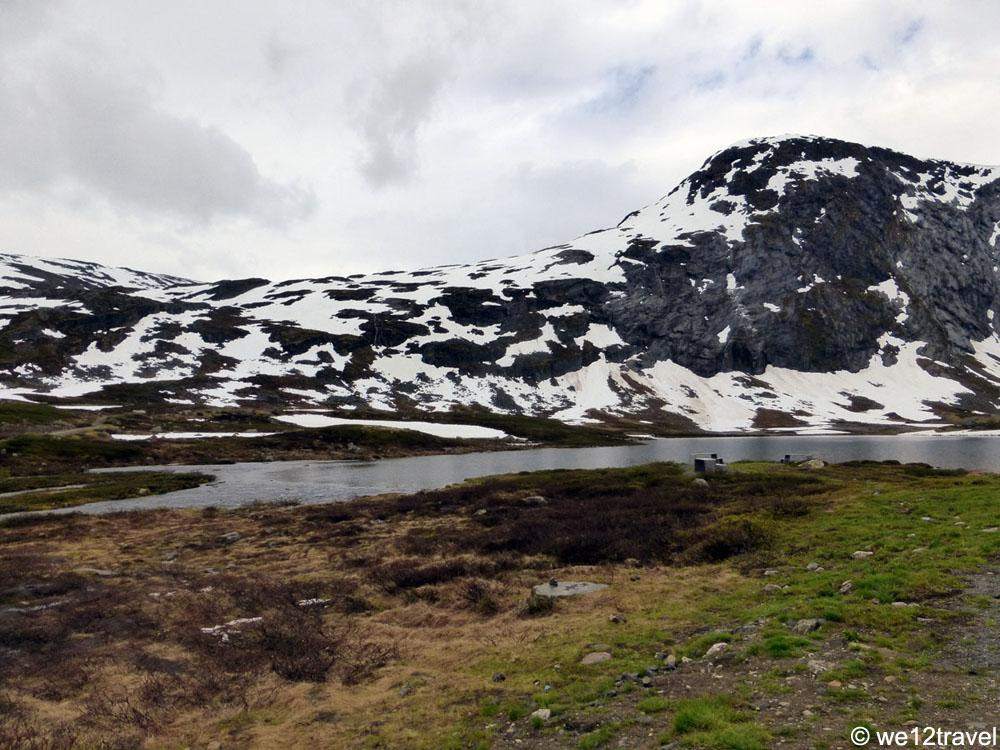 After spending the majority of our day in Geiranger, it was time to return to Strynsvatn. As we wanted to go out for dinner at night, we headed into town (approximately 15 minutes from the campsite) but there was no restaurant that looked very appealing so instead we bought burgers and prepared them in our well equipped kitchen. After eating them and of course munching on some cinnamon rolls for dessert, we planned on doing the hike we were advised to do by the owner, which is located just behind the campsite. Unfortunately, it started pouring like crazy so we let it be…The evening before we had already decided we’d definitely come back here one day! 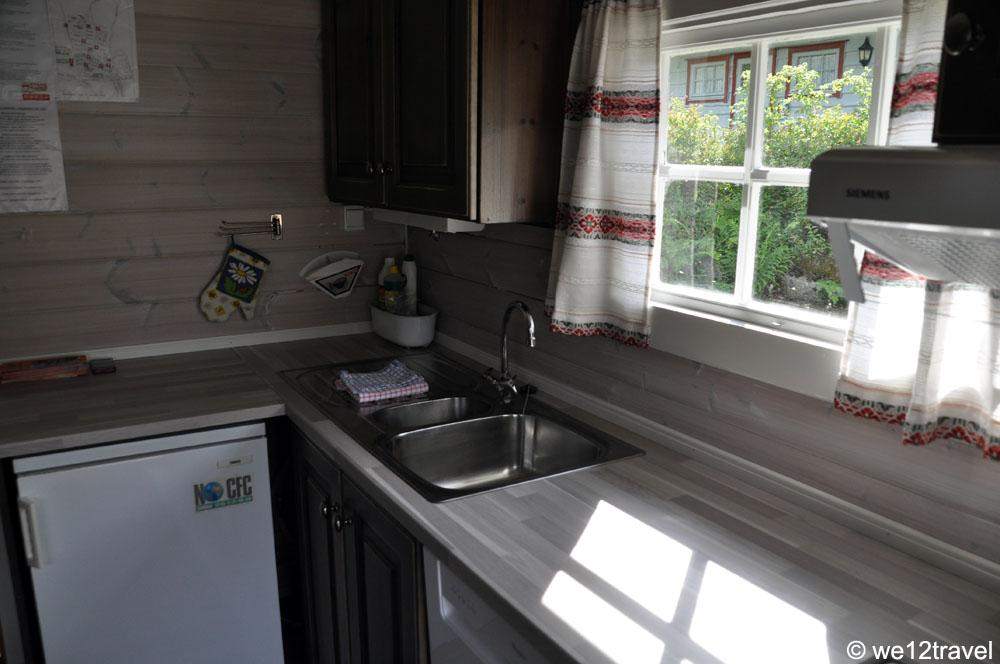 Instead, we enjoyed a comfortable night on the covered deck of our cabin. Sending whatsapp messages to our Dutch friends (making them jealous with our pictures) and reading books … a perfect way to spend an evening in Norway. 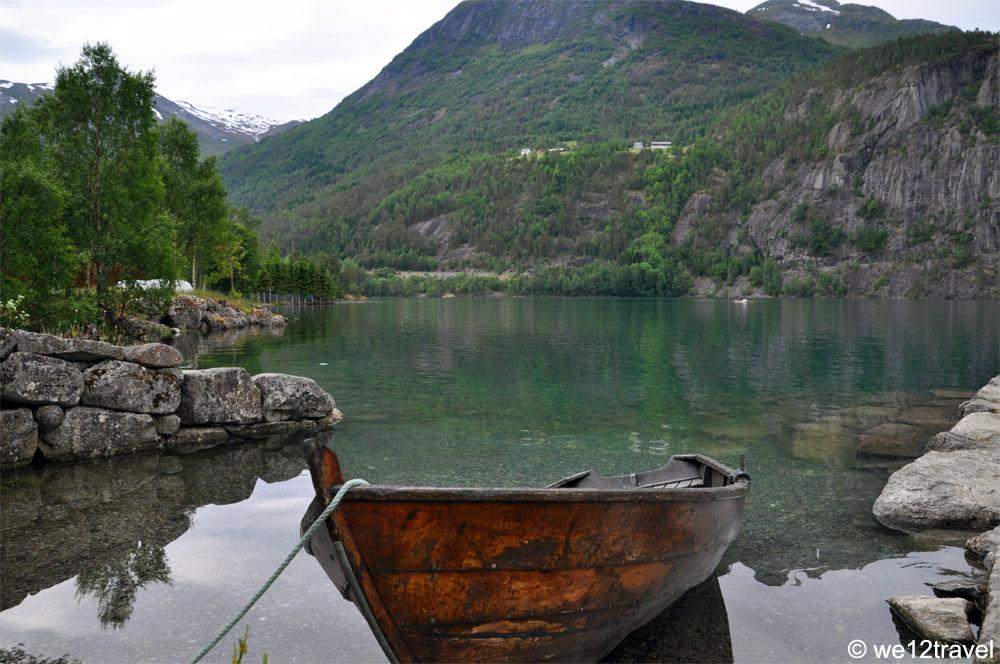 Even though the weather didn’t always cooperate (but hey, that’s the mountains!) we really enjoyed our time here. Next time we’re in Norway, we’ll come definitely back here, but then just a bit later in the season when all the roads are open and the hiking trails are more easily accessible.

Disclaimer: we were guests of Strynsvatn Camping however all opinions expressed in this article are entirely our own. Note that this blog contains affiliate links. If you make a purchase through such a link, we may receive a small commission at no extra fee to you.