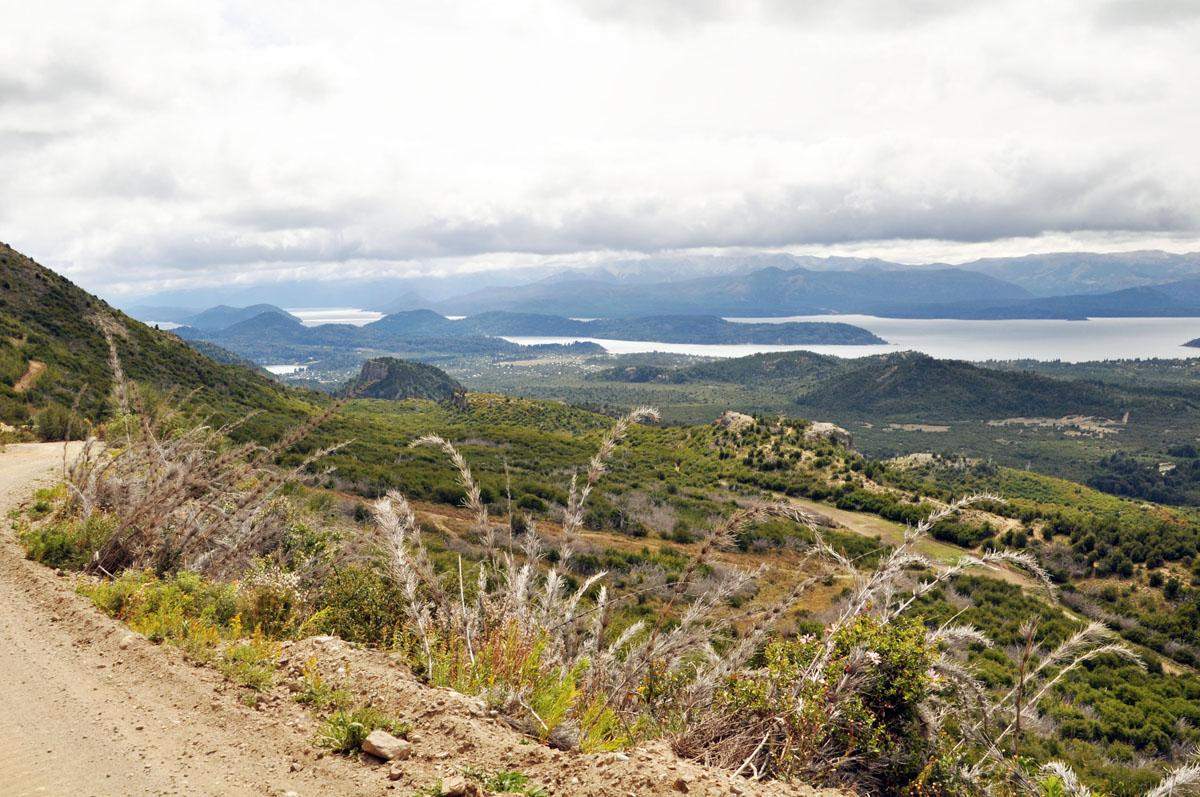 There is this thing about Bariloche that kept me away from it for years. Maybe it was because Argentineans like to take their vacations there so it was bound to be very touristc, or maybe it was because they say it looks like Switzerland – with their mountains, lakes and chocolates. As Switzerland is “just around the corner” for us, I didn’t really feel the need to fly all the way to the other side of the world to see just that. Some people I talked to rave about Bariloche, some people say it was utterly disappointing when you compare it to the rest of Patagonia.

When I accidentally won two planetickets to a city by choice in South America, I knew this would be our chance to see for ourselves if Bariloche would be our kind of place or more like the tourist trap other travellers were talking about. As our main aim for this area of Argentina was hiking up to Refugio Otto Meiling and spending the night between the glaciers streaming down from Cerro Tronador, we couldn’t avoid a staying in Bariloche. As we didn’t want to bet our trip up to the glaciers on one good day, we ended up spending 3 nights in the city … 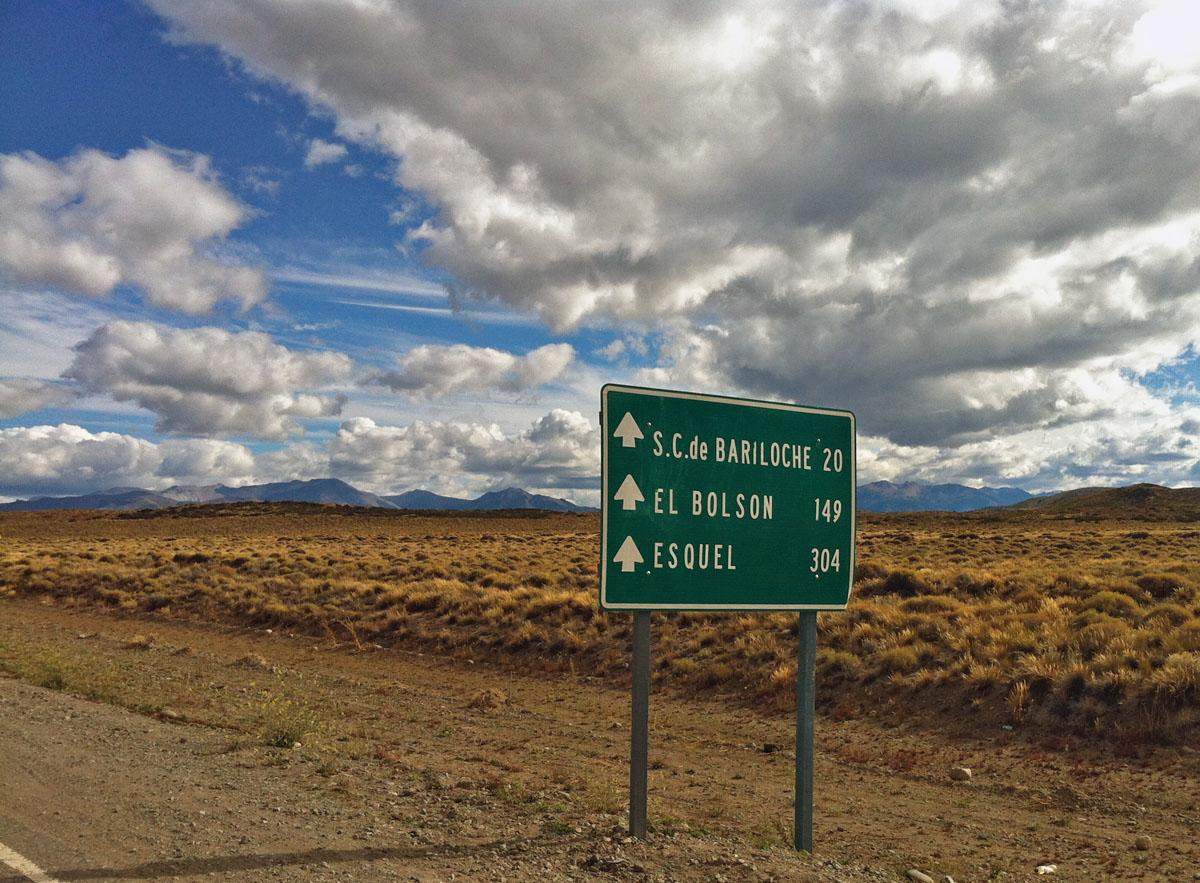 My first piece of advice to future travelers would be, to decide for yourself if you want to drive in Bariloche. If you are not used to driving in chaos, better make sure to move around by cab or by foot. The city isn’t too big but what makes the driving there somewhat challenging are the narrow and steep roads. You will occasionally find yourself stuck in traffic in a super streep street. Cars will horn at your and pass you on either side (even though it seems impossible) so it can quite be a challenge to keep cool. Although I’ve driven all over the world, this was probably the most challenging place of it all (yes, even more challenging than driving on the left side of the road in downtown Glasgow on a Saturday afternoon).

After our hiking trip to Refugio Otto Meiling and Pampa Linda, we still had one day to spend around Bariloche. We planned on doing something active such as cycling or kayaking on Lago Nahuel Huapi, but the weather turned out to be pretty bad so eventually we decided to sleep in and take it easy. We booked a boutique hotel for almost nothing online (the perks of traveling in low-season) and arranged an excursion on the Circuito Chico for the afternoon, as we heard this was a true must-do.

That morning we wanted to get some hiking done (never say no to hiking!) so we decided to head out to the Cerro Catedral area, which is famous for skiing in the wintertime. Skiing means there’s mountains so there was bound to be some possibilities for hiking, or at least that’s what we thought. We made the 19 km drive up to the mountain and upon arrival it was pretty obvious that there wasn’t a whole lot to do. It was a Sunday so we expected it to be pretty crowded (like it is in mountain villages in the Alps) but it was super quiet. We parked the car and checked to see if there were any hiking trails, but other than the trail up to Refugio Frey, there weren’t any.  We figured we’d take the gondola up into the mountains to get some hiking done there, but it turned out that it was closed on Sundays. As we didn’t feel like driving back to the center of town already straight away, we decided to go hiking for a bit on the slopes, or at least the trails that are slopes in the winter. It certainly wasn’t the most spectacular hike ever but at least it kept us busy now that we were there. In all honesty, we found the Cerro Catedral area a bit of a disappointment so if you only have a few hours to spend in and around Bariloche, you can easily skip this! 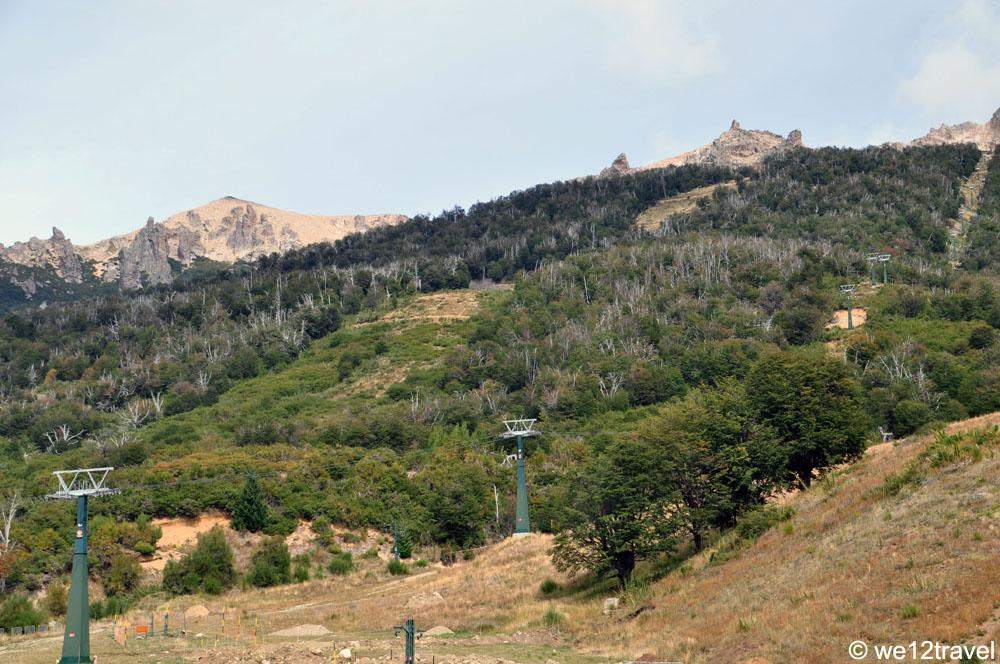 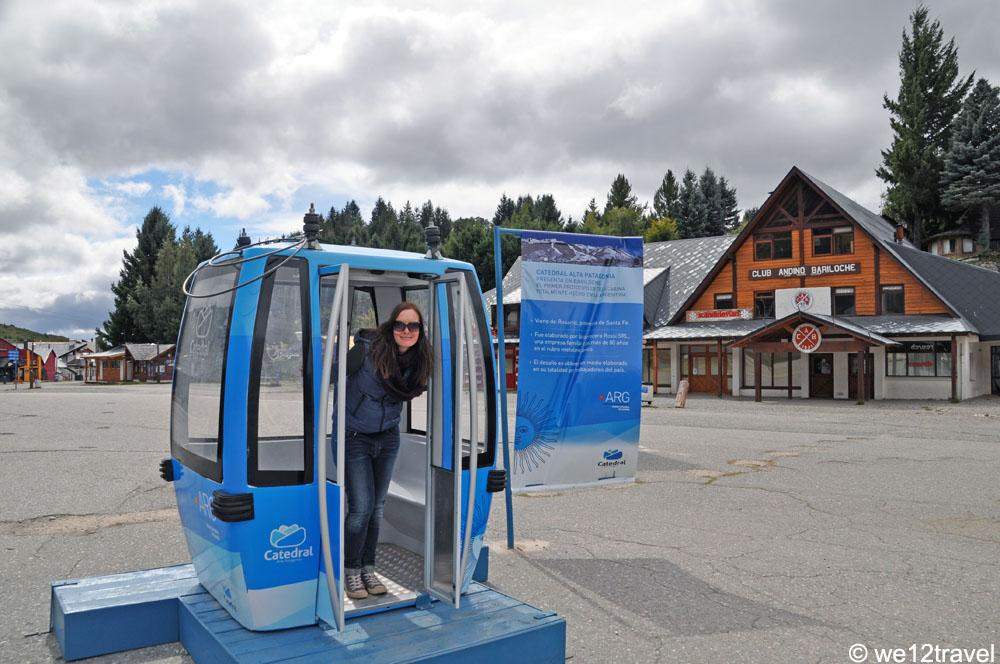 In the afternoon we headed out to Circuito Chico. We already wrote a blog about it after arrival back home, which you can read here. If you don’t feel like reading it, in short, we can definitely recommend doing this, even though it’s pretty touristic. Our original idea was to cycle it but the poor weather kept us from doing so. Along the way, we witnessed a traffic mess. From what we could see, a cyclist had been hit by a car and Martijn said “looking at that bicycle, I’d be surprised if he/she is still alive.” The next morning on the news, it turned out he/she passed away… 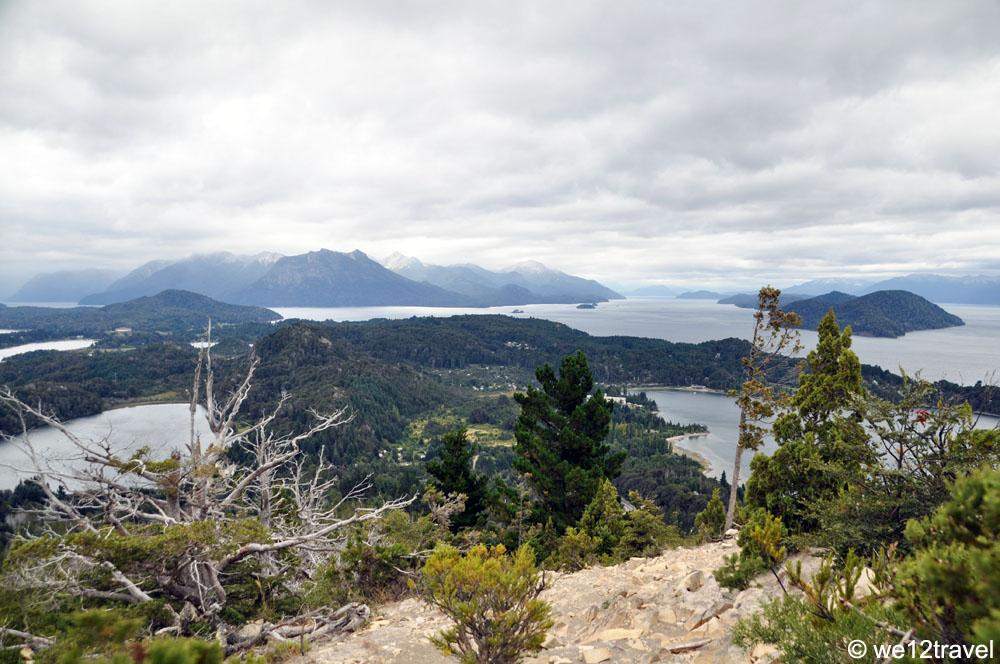 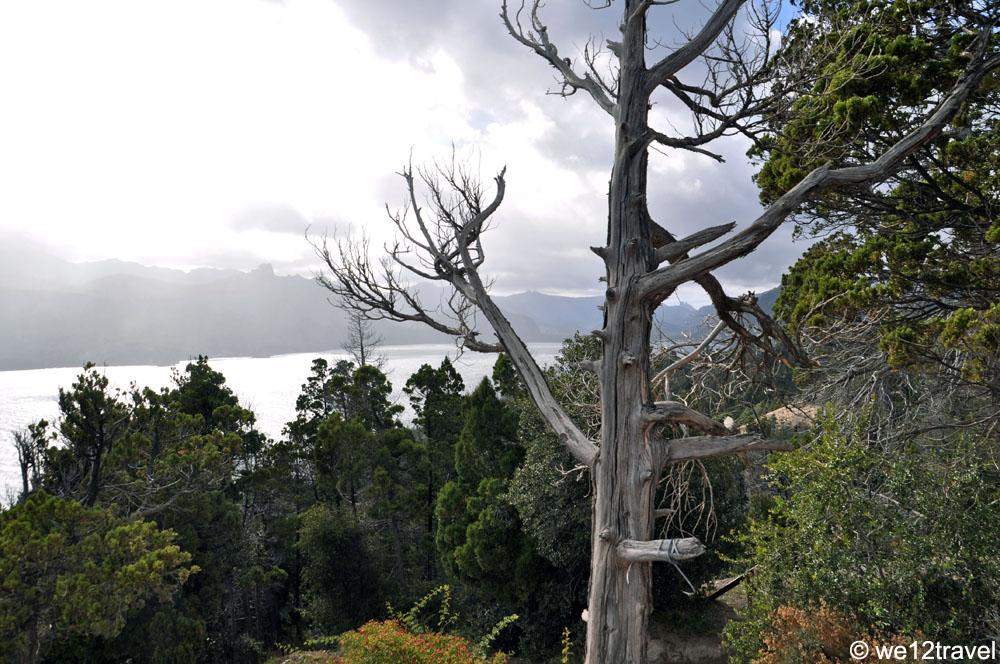 If you’re up for a really great drive, make sure to do the Circuito Grande. Since we had already done the drive from Villa La Angostura to Bariloche and had planned to drive up to San Martin de los Andes via Villa Traful the next day (which basically makes the Circuito Grande), we decided it wouldn’t be worth to do this as another side trip but it’s an awesome drive … very pretty and worth the time. I’d even say make this your top priority as it will give you a great idea of the area!

How about the chocolate?

I’m not sure what the thing is about Bariloche and the chocolate (ok well I do know – it’s about the history with Austrians and Germans back in the 1800s) but it’s obvious when you arrive: chocolate is everywhere. So as a total chocaholic I was bound to be happy in Bariloche, but then I saw the prices and I nearly got a heart attack. And decided that no matter how much I love chocolate, I would just go and buy it at a regular supermarket. In my humble opinion, the whole chocolate hype in Bariloche is totally overrated …

Bariloche offers a great range of accommodation. We booked our stays online just a couple of days before arrival as we were traveling mid-March, so we expected many hotels to have good last minute deals, which was indeed the case. On our first night we stayed at the Best Western Villa Sofia, which was OK but a bit out of town so I’d recommend this one only in case you have a car. On our second stay, after our trek to Refugio Otto Meiling, we stayed at The View Boutique Hotel. This one was pretty close to the city center and offered great views of Lago Nahuel Huapi and the city. I think we just paid about 40 USD per night so if you travel in low season, waiting until the very last minute is definitely worth it! 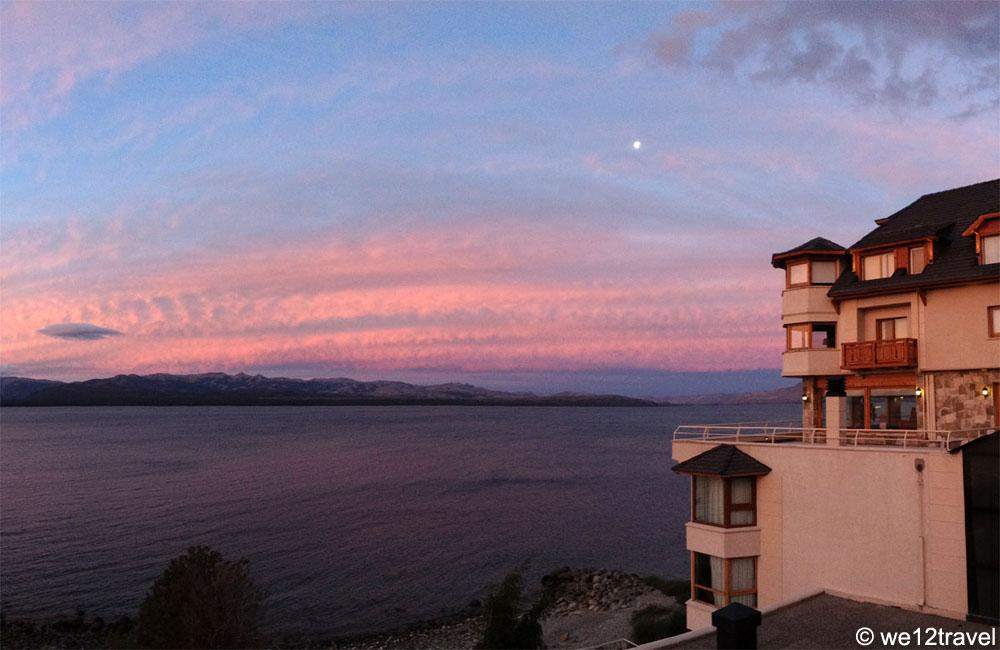 Bariloche has many places to eat however there are two we’d really like to recommend to you. First one is La Trattoria de la Famiglia Bianchi which was recommended to us by a friend who was in Bariloche a couple of weeks earlier than us. Their pizzas are great and a welcome change after eating steaks for a week or more. On the other nights (yes, nights!) we went to Cerveza Manush which is more like a pub and a place where the younger people like to head in the evening. As we really liked the atmosphere, we decided to head there two nights in a row, not something we usually do…

Conclusion of our stay in Bariloche

Bariloche has everything going for her – the mountains, the lake, the natural surroundings, so it’s no surprise that it attracts a lot of people, mostly Argentineans. The trips we made to Circuito Chico and Pampa Linda were truly memorable and especially the latter one was one of our favorite experiences of our Patagonian Roadtrip. However – if you can avoid staying in the town of Bariloche, please do. Even though the people were nice and the food was good, we didn’t feel happy in this crowded place that is full of tourists and overpriced chocolate shops. I guess our disappointment may also have had to do with the low season (I don’t even want to think about the number of tourists there in high season!) and with the fact that Cerro Catedral was a major disappointment. Witnessing a fatal accident on Circuito Chico didn’t help, either.

Sorry Bariloche, it was us – not you. I’m sure that many people will love you, we just didn’t fall for you…

Want to read more? You may enjoy these:
– A roadtrip from Puyehue to Bariloche
– Things to do in Ushuaia on a rainy day
– 5 Places you should see in Argentina!

Or read all of our post about our Patagonian Roadtrip here. 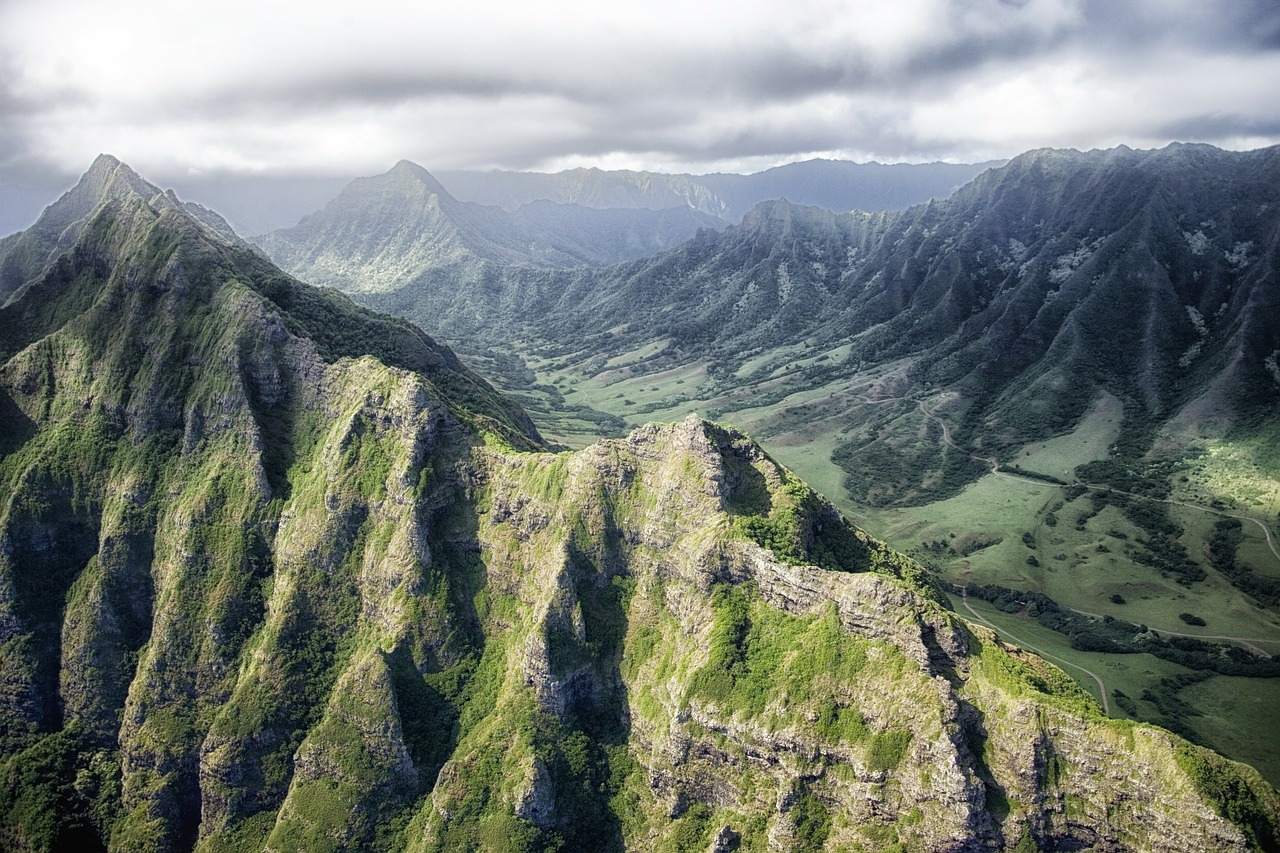 Sunday social travel talk – the why & how!