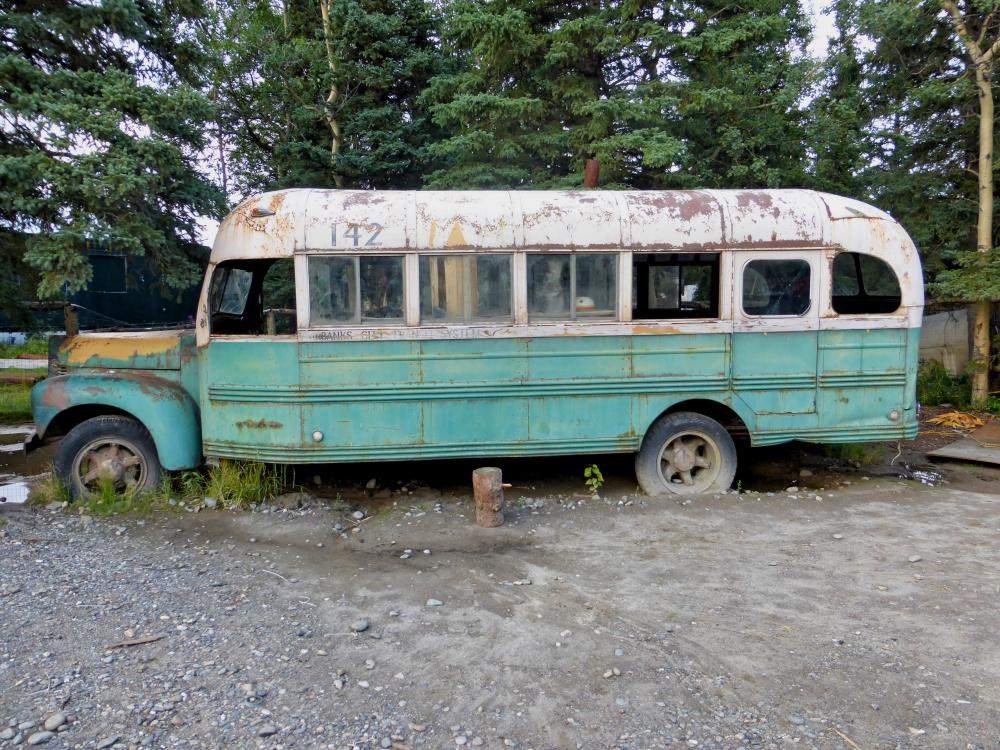 Over the past yaers, I received quite a lot of questions about ‘the bus from Into the Wild’, also known as The Magic Bus. So in this blog, I will answer them for you, making the information available for everyone who wants to know more about it. Where to find it, where to find the replica, how the bus got there and why I chose not to go there in the past.

Note that the real bus has been removed and this article was written well before that happened in 2020. Updates about where the bus from Into the Wild is now are below!.

About the Magic Bus from Into the Wild

My first time in Alaska was back in 2007. I was assistant guiding a camping tour and the lead guide thought it would be fun to drive up to the Stampede Road for a bit to see where it would take us. We were driving a 14 passenger supervan and once the road got too bad, we decided to turn around before we got stuck. Until we actually got stuck in a big pool of mud … Luckily there were 12 people in our group to help us digging out the wheels and one hour later, we were on the way again. When we exited the Stampede Road and turned back on to the George Parks Highway, the lead guide told me the story about Chris McCandles and that was when I heard about Into the Wild for the very first time. 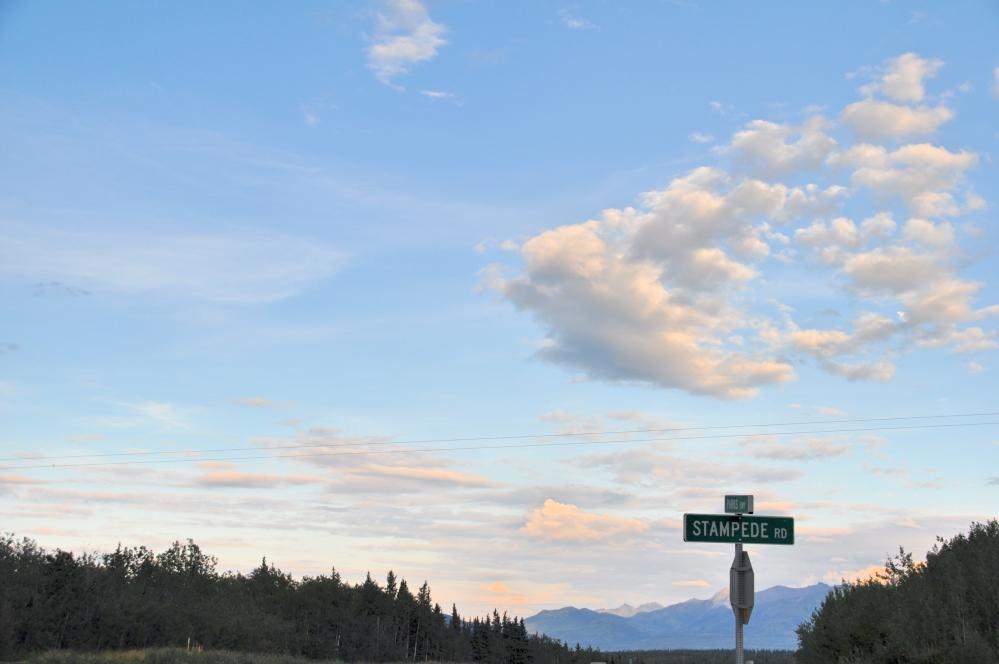 Into the Wild and how did the bus get there?

When I got home, I immediately bought Into the Wild by Jon Krakauer and finished it within no-time. The story really got to me and I felt miserable for days, realizing Chris got stuck and had eventually died out there while he was all alone in the Alaskan wilderness. A few months later, the movie came out and suddenly everyone in the world, seemed to know who Alexander Supertramp was. In addition, they felt like they needed to go to Alaska and get over to that bus. The Magic Bus. Fairbanks City Transit System Bus 142. The bus that is stuck in the middle of nowhere and was left abandoned there in 1961 by the crew of the Yutan Construction Company.

As a part of my previous job, I sold trips to Alaska. Although the movie hype is pretty much over, I’m was asked every now and then if you can reach the bus and if yes, how to get there. I always answered with the same phrase: “you can get there but it’s not recommended and if the locals will have to come and rescue you, they won’t be happy. It’s Alaska, not Disneyland.”

Thing is, unlike many other American places, Alaska is not your typical tourist destination. If it would have been, someone would have thought of making a bridge across the Teklanika River and get busloads of tourists there, just to make money. Fortunately, they don’t and that leaves the only option to get there, which is by foot. Those who are fit should not have trouble with the trail but the big difficulty is the Teklanika River which has to be crossed by foot. Many hikers have gotten into trouble as they were not prepared for this or they just had no idea how to safely cross a river by foot.

In 2010 a female hiker died as she was swept away while crossing the river. This proves that hiking to the Magic Bus is no joke. Alaska is unlike any other place in the world. There is no cellphone connection, there’s nothing than vast wilderness around you. If you get into trouble, you’re there all by yourself. Local hunters don’t like people stepping into ‘their land’ and I’ve been told by various people that I talked to during all of my Alaska trips, that locals are tired of having to rescue hikers from the trail because they got into trouble. In fact, they rather don’t see any tourists coming there to see the bus at all…

Sure, I’ve been thinking of going to the bus as some kind of pilgrimage but eventually decided not to. There are various reasons, but the most important one being that nobody in Alaska asks for this kind of tourism. OK, maybe a few do, but most Alaskans are not amused by yet another hiker attempting to be the next Chris McCandles. Having been to Alaska seven times over the past years and having spoken to many locals, they see those tourists as fools and the next stupid adventurer. Do I want them to think of me like that? No. Will I become a better person if I go and see that bus? No. Is the trail really that stunning? No. Am I willing to risk my life to get to that bus? No.

Back in 2011 I did a serious river crossing while hiking in Iceland and I nearly got swept away. It was a terrifying experience and back then I swore to never do any river crossings anymore. Of course I did them again ever since, but I stayed away from the big rivers. I still recall the moment I was ready to give up my battle against the water and let myself be swept away by the river, my back then partner pulled me out of the water. Just as I’m typing this, shivers run down by my spine just by the thought of having to do such a thing again… water has always been and will forever be my worst enemy. 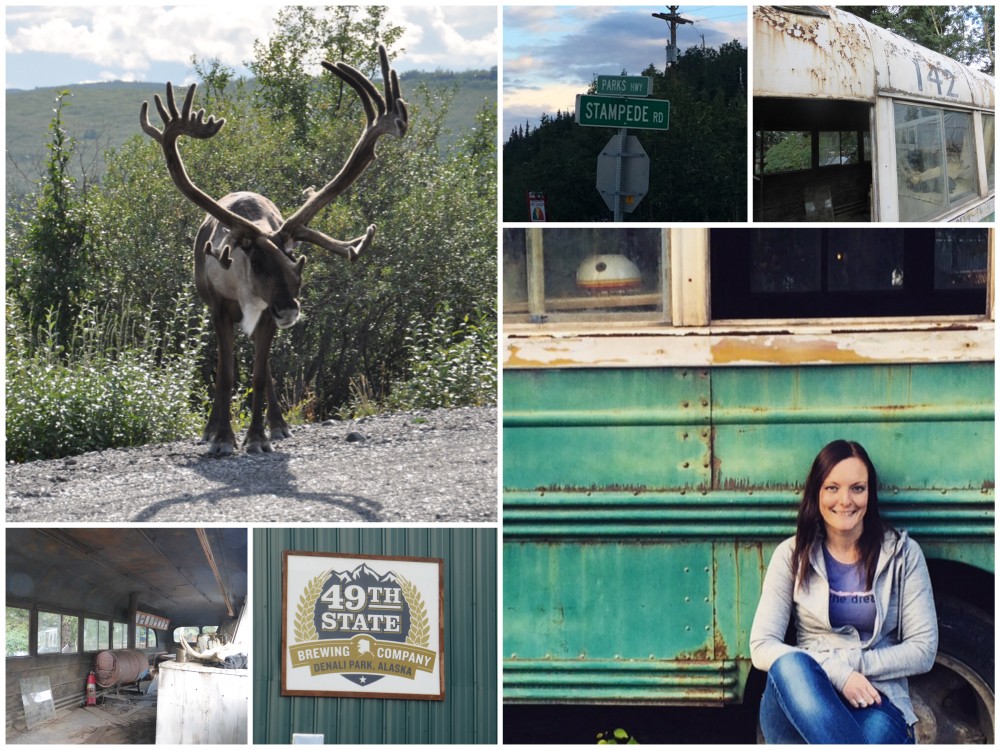 How to find the movie bus from Into the Wild

Luckily, there is an alternative. Sure, it’s not as good as ‘the real deal’ but it was good enough for me. If you head out to Healy near Denali National Park, you will find the 49th State Brewery there and they bought the bus that was used for the movie. Although it’s in a touristic place, when we were there, nobody seemed to pay attention to it and we could take pictures as we wanted. Kids were playing soccer in front of the bus and nobody even seemed to raise an eyebrow as I was taking pictures. That’s just how it works in Alaska…

Where is the original bus from Into the Wild now?

In the summer of 2020 the original bus from Into the Wild was airlifted to Fairbanks after another death of a hiker attempted to reach the bus. I actually received a call from the BBC and Dutch National radio to talk about this and found out while on vacation. At this moment (november 2021) the bus is still in Fairbanks, at the University Campus. Here, conservation work is done and it will take a few years to finish. However the bus is no display for visitors. More information can be found here.

My heart feels sad for the bus being removed but I can totally see why this happened. Alaska is not your typical travel destination and having been to Alaska seven times I still feel that it’s a truly wild place where everything is different than the other US states. I hope that one day the bus will be on display for those wishing to see it but am glad that it can no longer be visited for pilgrims, for the sake of Alaskans who put their own lives in danger in order to save irresponsible hikers.