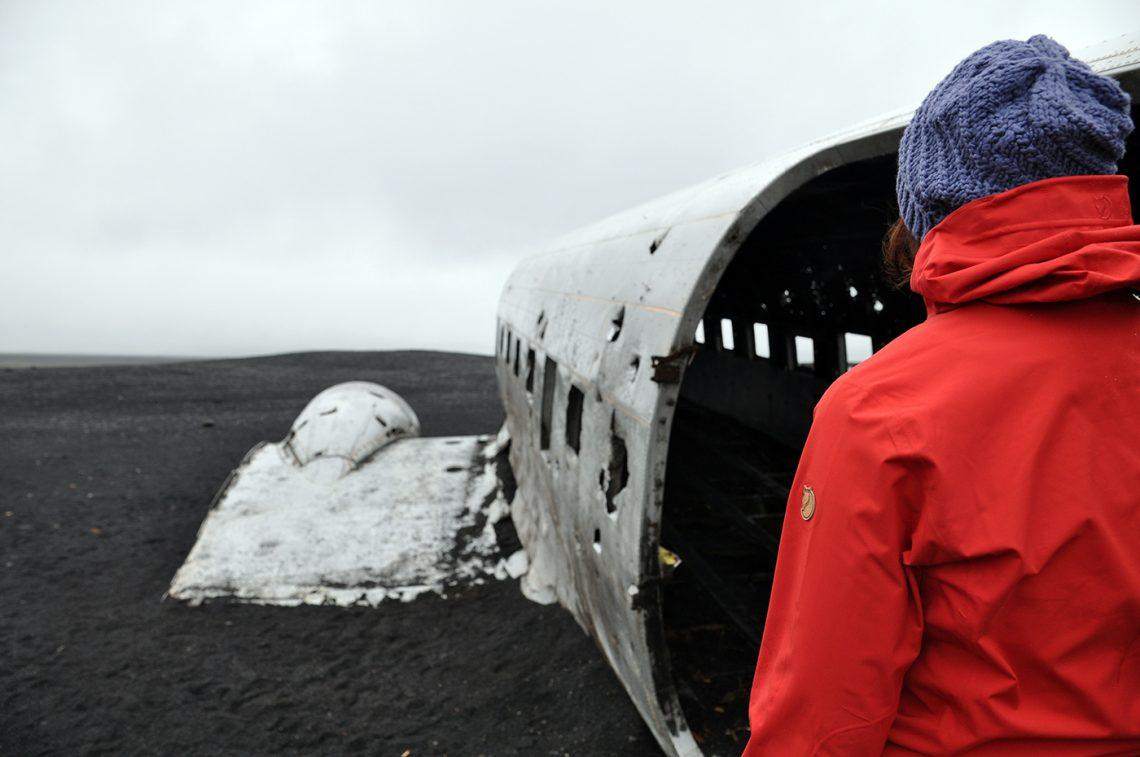 You may have seen it on pictures a lot, but up until a few years ago I didn’t even know there was a dc-3 plane wreckage to be found on Iceland’s South Coast. However, more recently it came on a Dutch tv show and all of a sudden there were pictures of this plane all over. Somehow I kept on forgetting to visit it on previous trips, so when we went back to Iceland for the seventh time this summer, we finally remembered to go and see the plane wreck.

[Note: this article was first published in July 2016 and updated after my most recent visit to Iceland in February 2019] 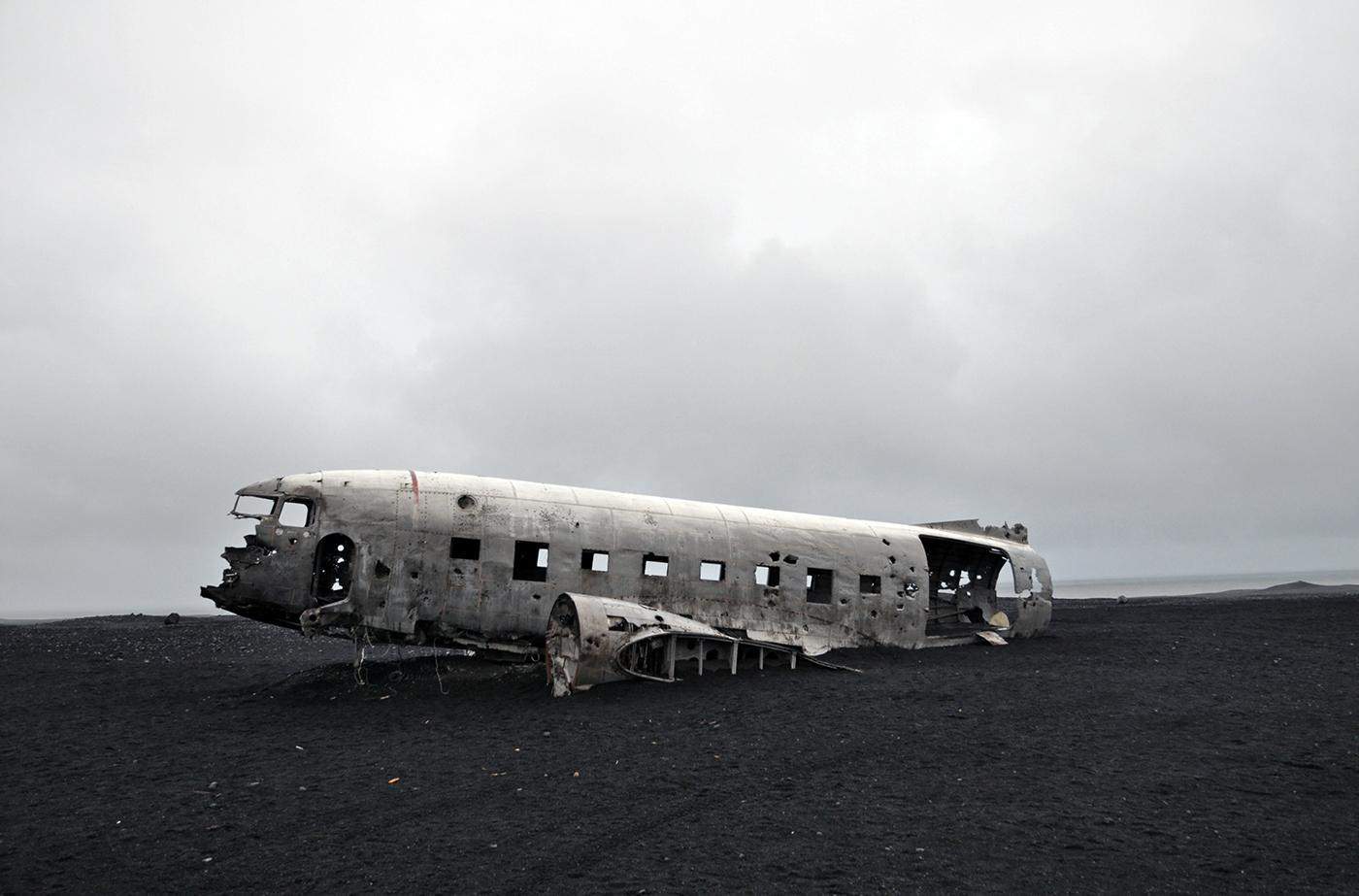 In 1973 a US Navy DC-3 ran out of fuel and crashed on the black sand of the Sólheimasandur near Vîk on the Icelandic South Coast. All passengers survived but the dc-3 plane wreck remained on the beach. It was never removed and always stayed right there. There are various stories going around on the web about the true cause of the crash but the fuel is one, another one is that is was heavily icing which caused the plane to crash. Whatever the cause of the accident may have been, it’s a very picturesque spot for photography and one thing you can’t miss when traveling along Iceland’s South Coast.

How to find the DC 3 plane in Iceland

There are no signs to indicate you the right direction. However, coming from Skogar on Iceland’s south coast, you pass a sign on the left saying Sólheimajökull 221. From here, keep your eyes out for a turnoff to the right after about two kilometers. There are no signs telling you where you’ll have to stop but generally there will be a lot of cars so it’ll be obvious. We passed by a couple of times and both times, there were plenty of cars and we saw plenty of people who came walking from the beach.

If there are no cars, you will recognize the spot because of an unpaved turn off with a cattle guard. On this cattle guard there is a chain, keeping you off the track. Up until a few years ago, you were allowed to drive to the wreck with your car however, they have now prohibited this because nature got spoiled and tourists were making a mess. Once you see a sign that it’s forbidden to drive here, you know you have come to the right spot. You can park your car here and then walk for another four kilometers.

Update: a large parking lot has been placed here so it’s not hard to miss it when following the description above, there will be plenty of cars and possibly tour buses there.

The walk to the DC3 plane wreckage near Vík

Yes, you read that right, you will still have to walk some four kilometers to the beach where you can find the wreck. When we were here, it was cold and dark, the perfect weather for an eerie setting like this. The way is super easy, just go straight and follow the track. From the parking lot there is also a track that veers to the right but that’s not the one you will need to follow, it’s the one that heads straight on.

During our visit there was almost nothing in bloom so it was just us, the dark sand and the wind blowing in our faces. Every now and then we’d pass some others coming back from the wreck but other than that, there’s not much there. It’s what I imagine Mordor to be like, but than without a volcano. It’s pretty in a very special way. I thought you’d be able to see the wreck from far away but you cannot really. Just before getting there, you will walk over a tiny hill and then the wreck can be seen. It’s impressive and scary at the same time. 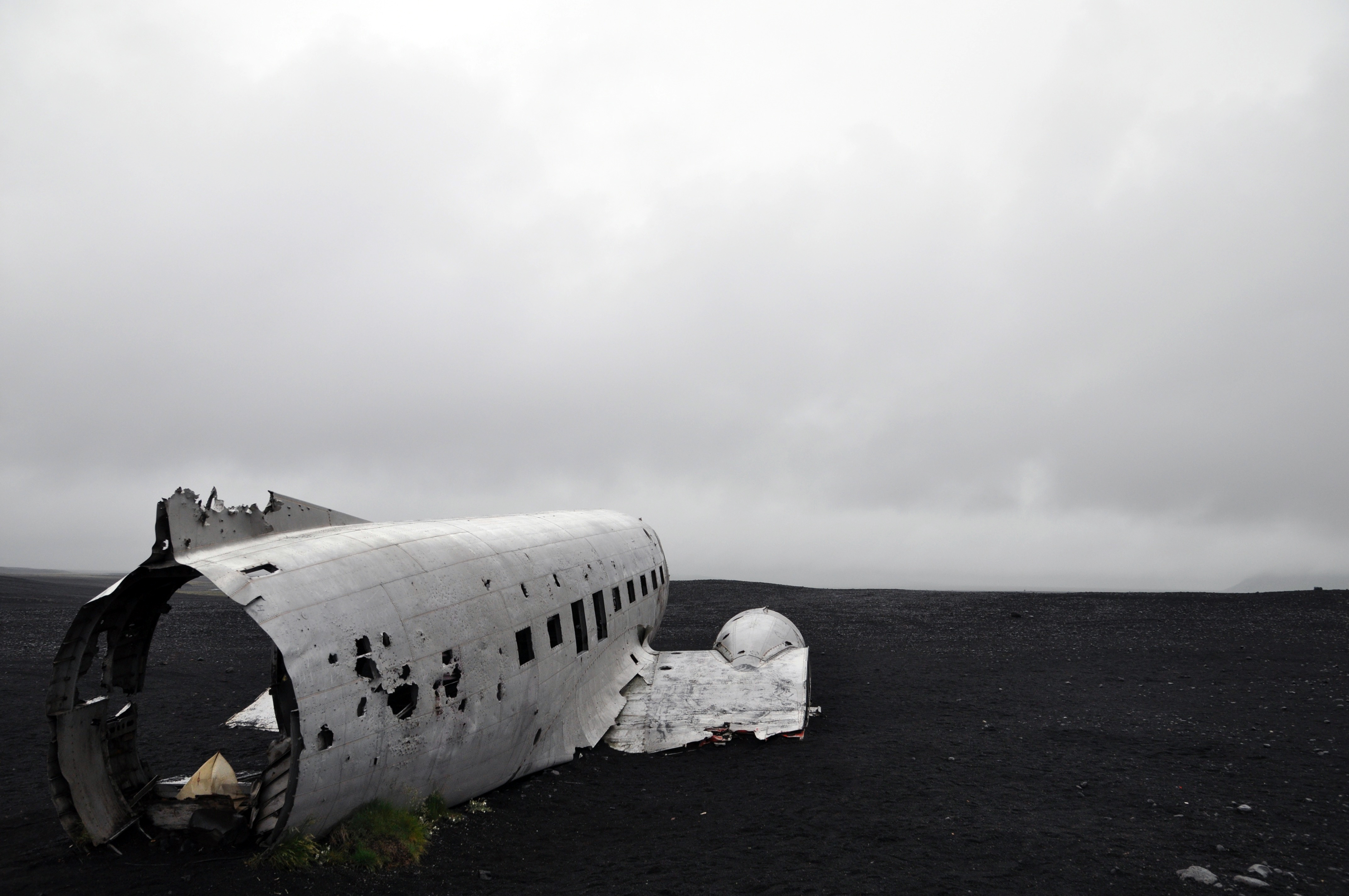 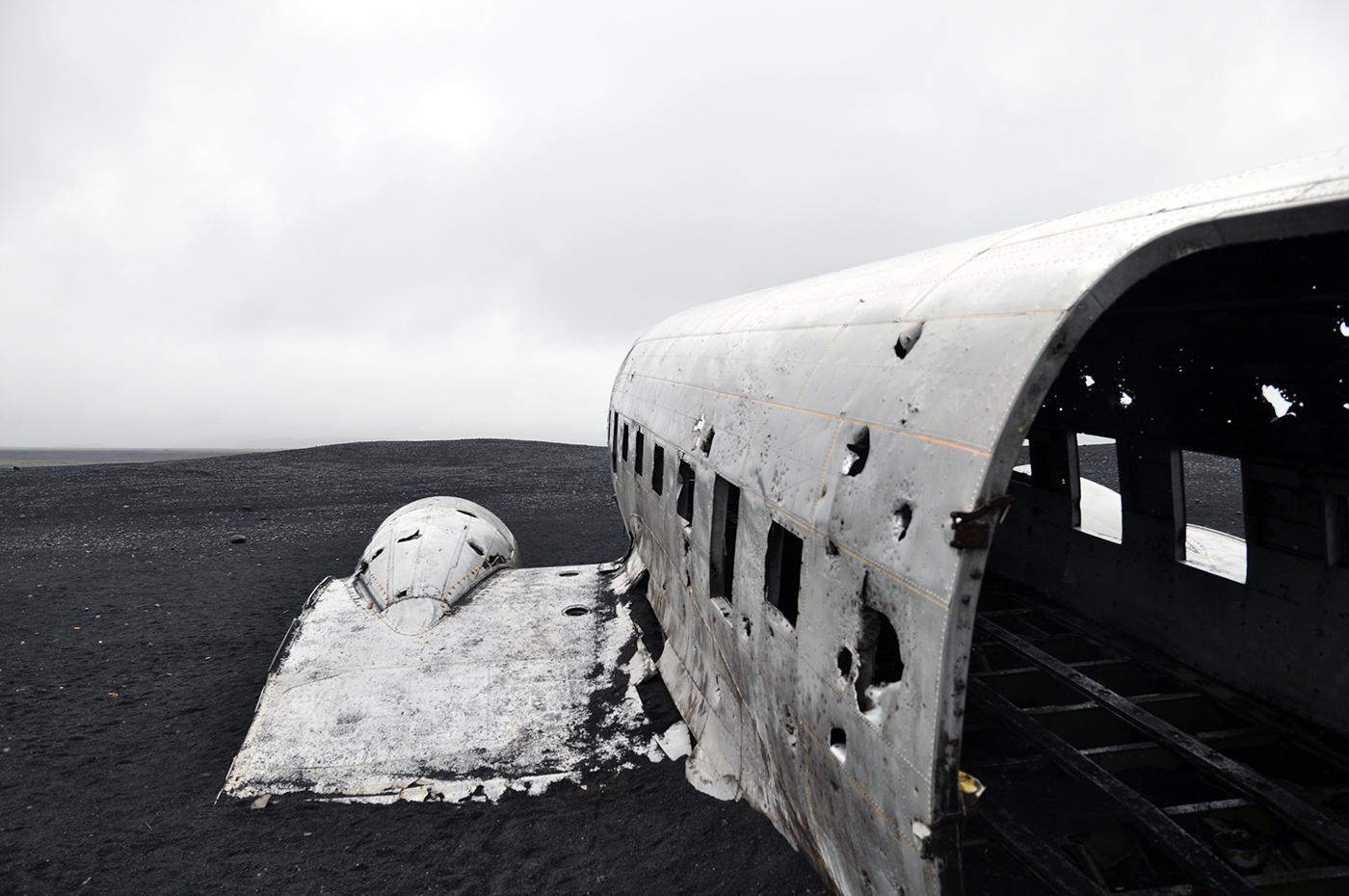 The remains of the DC3 plane wreck

All that remains of this DC-3 plane wreck in Iceland is the half of the two wings, the nose and some of the fuselage. You can even still see some of the wiring from the electronics in one of the wings. Inside, people have left a lot of junk and stuff that doesn’t belong there. There are tissues, wrappers and someone even left a broken umbrella behind. Very sad in my humble opinion…

We spent some thirty minutes at the wreck, taking pictures and observing it, before heading back to our car. In the meanwhile it had started to rain and when it rains in Iceland, it usually comes from the side. It got cold and as it was late at night already (the perks of traveling in Iceland in June) we were happy to be back at the convenience of our warm and dry car. 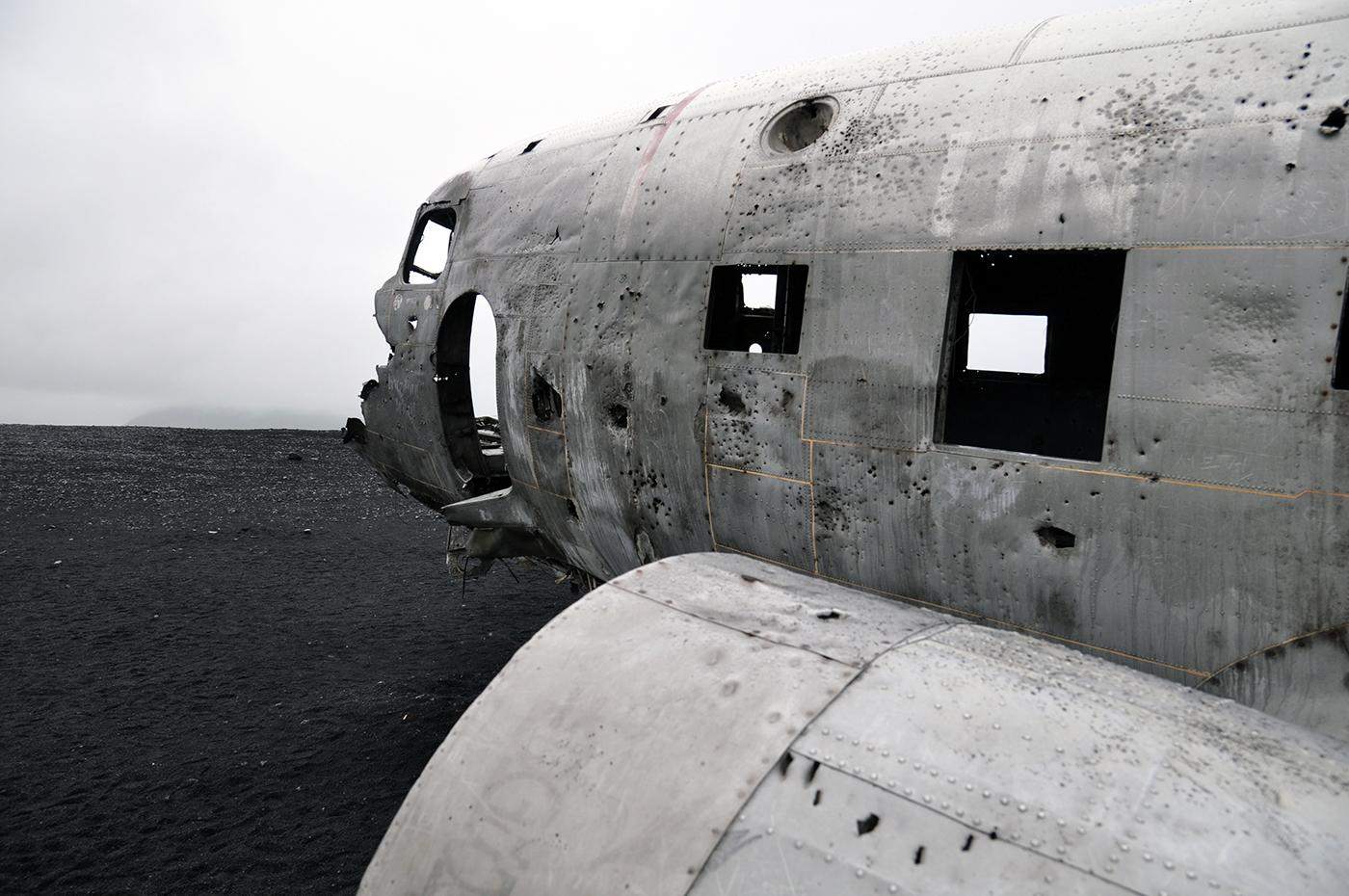 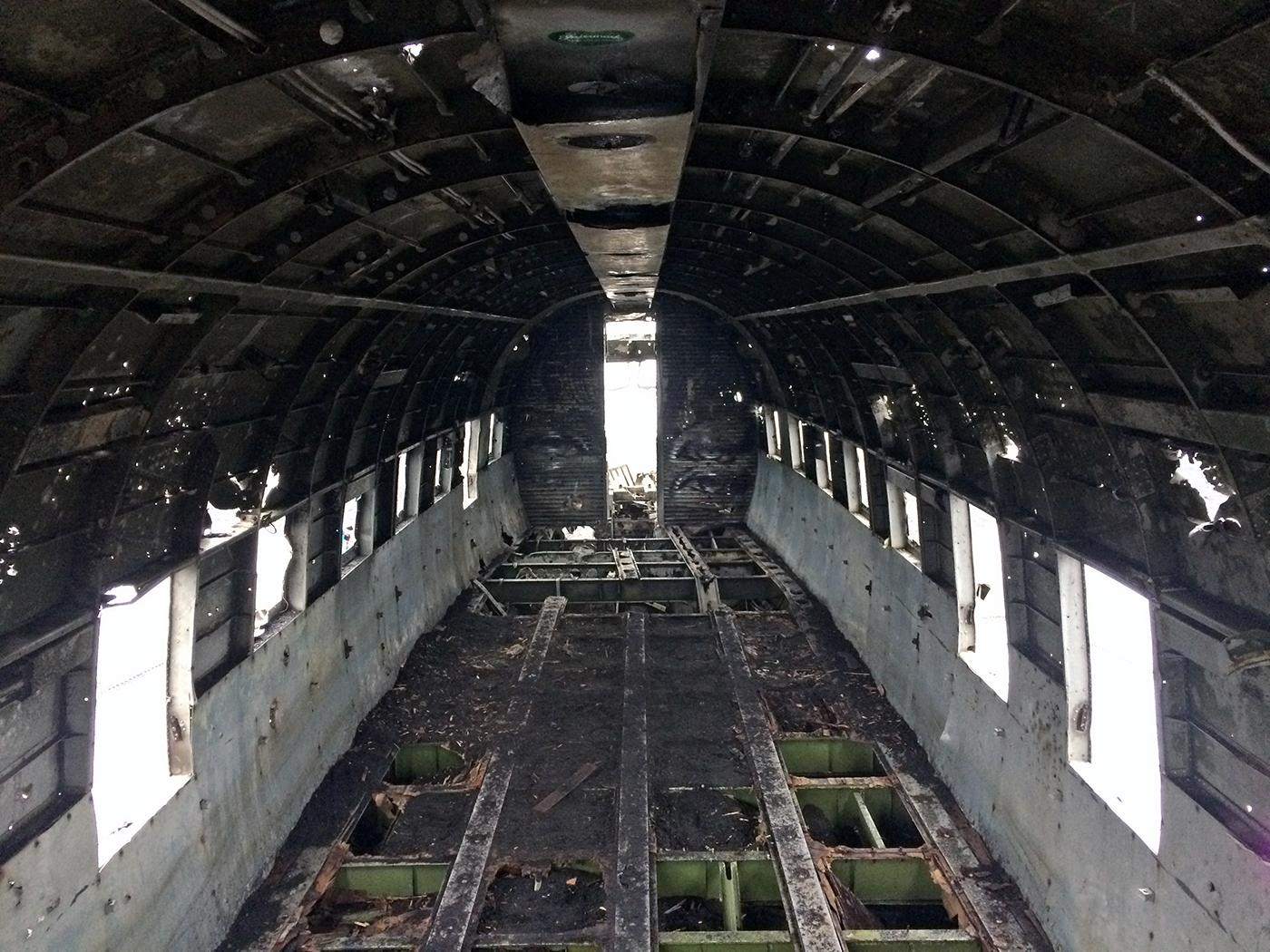 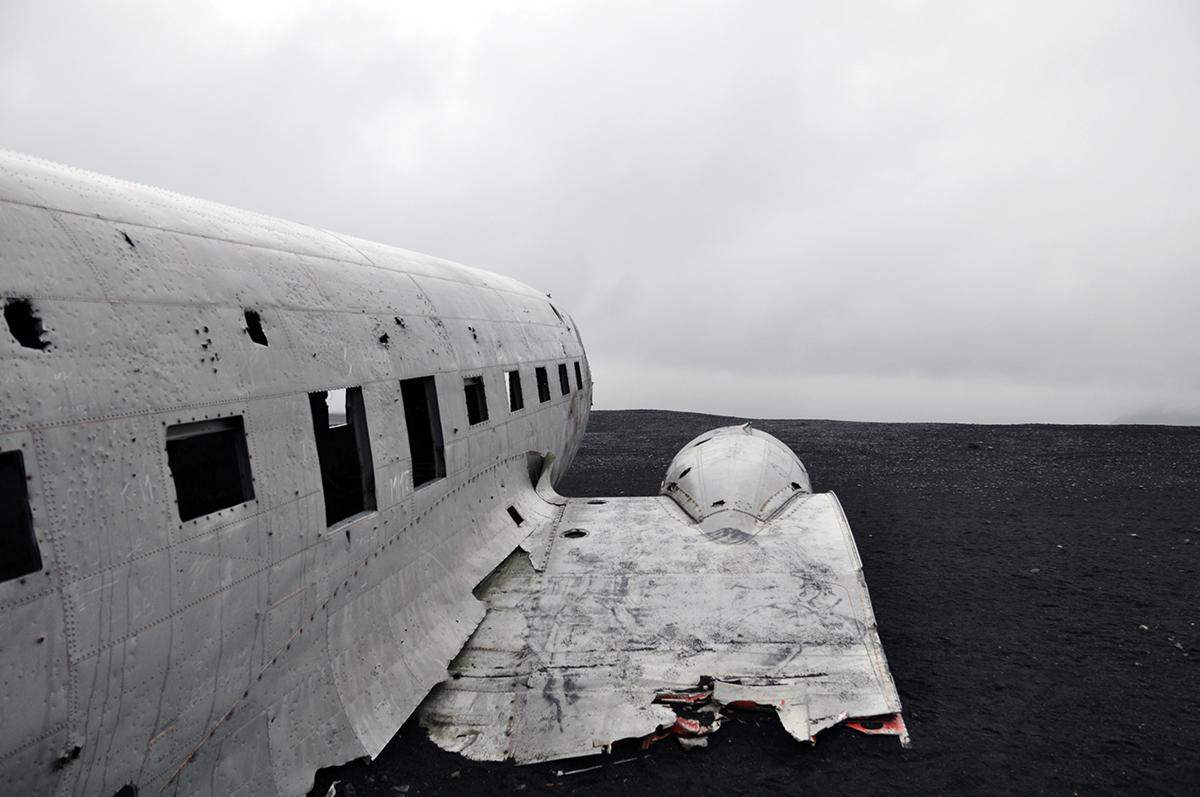 – Please observe the sign you cannot drive your car over there and respect this. The plane is on vulnerable land the last we want is for it to be banned going there altogether, right?
– If you are unsure if you can find it, then go in the summer during midday, it will be impossible not to find it.
– If you want to be there in peace and quiet, be like us and head over late at night. In June it’s light 24 hours a day and we were there close before midnight, but it was still light.

Would you like to visit this DC-3 plane wreck in Iceland? Or have you maybe seen it already?