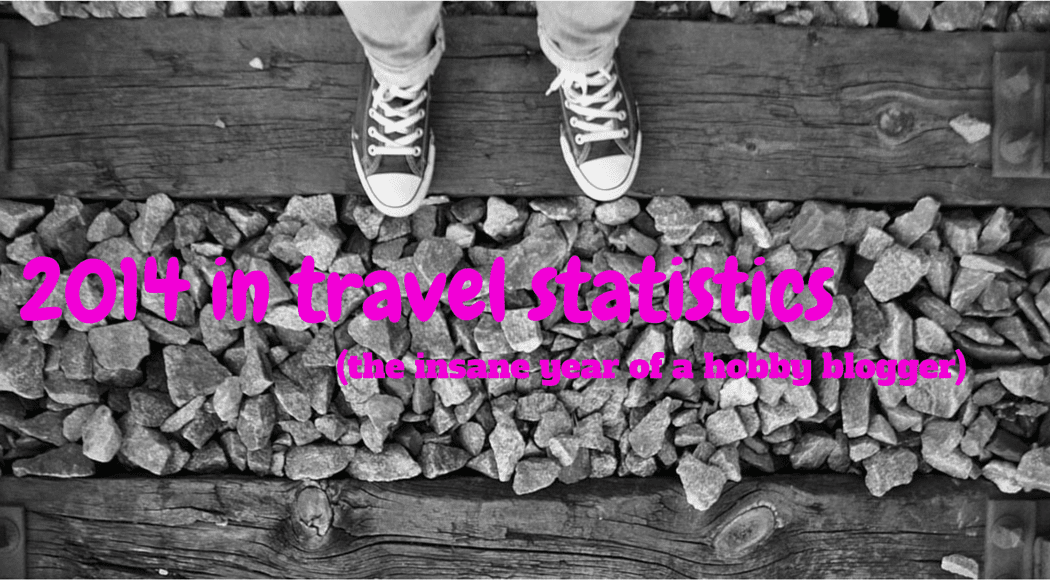 It’s a dark Saturday in early December when I’m preparing my last blog of the year. The one that I’m going to post on December 31st. The one I’ve been looking forward to all year and that everyone is going to write: their year in traveling.

When I started the year, I had no clue how it was going to develop. I knew there would be a few trips but other than our Patagonia trip in March, there were no other plans. Our blog had just been picked up at the launch of the Travel Writers Manifest and got more and more visitors each day. At the same time, it was the busiest month of the year at work. January is always insane so basically all you do is eat-sleep-work-repeat. Never could I have imagined what a crazy travel year it was going to become.

Looking back, I knew I traveled a lot. That I was almost never home during certain months, but that I was always packing, unpacking or doing laundry. That stories filled my head but that I wasn’t able to write them down most of the time. That I lived in a permanent state of jetlag during the spring and had to perform magic to keep all balls up in the air.

So are you ready for the results? How many days of the past year do you think I was away traveling? Scroll down and watch for yourself! 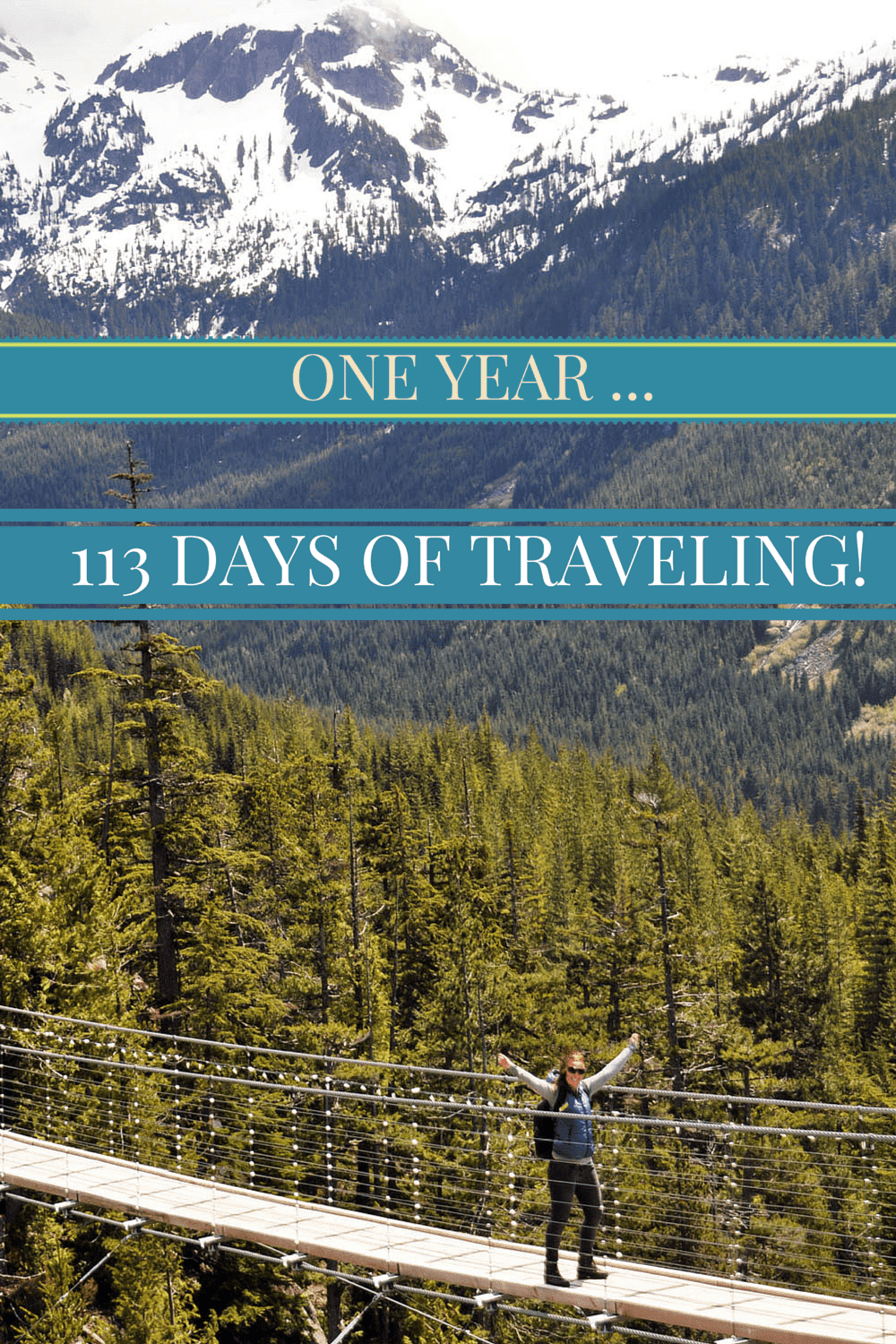 Especially the one third part left me in shock. Just as you spend about one third of a year in your bed (or in my case, one quarter as I learned to live with less hours of sleep over the past year) I spent one third of 2014 on the road. Or in a plane, in the mountains or with my bum on a beach.  In addition to my fulltime job, a household (we still do all chores ourselves, no cleaner, no doorstep grocery delivery and most definitely not any kind of assistant), my regular hours at the gym and my social life, I managed to spend one third of the year traveling. INSANE!

I can hear you think “how does she do that?” Well, I don’t know. Looking back at it, I really have no clue. I can just tell you about some tips and tricks I applied to make the most out of my time…

1. I work 36 hours, giving me one day off every other week. Normally that’s a Friday but if I would like any other day off, I can usually swap it around. Because of this, a certain number of trips didn’t require taking a day off.

2. We try to combine national holidays with traveling. This year we were away for Easter and for Christmas. We don’t really care about family traditions (and they don’t either) so we prefer to get out and take advantage of our time off, rather than spending it being a bunch of couch potatoes and sleeping in (although sleeping in can be really good from time to time, I’ll admit…)

3. I also counted day trips as traveling, but only if they were abroad and if they were longer than 8 hours. In this case, these were our skiing trip to Winterberg and our climbing trip to Ibbenbüren.

4. I travel for work too, which I also counted as traveling. 21 Days of the 131 were for work. I can hear you think “perks of the job” and that is totally true, however if you would know what an average person who works in tourism earns, you will probably think twice about making a career move. Working in tourism is only for you if you are passionate enough about it, don’t do it for the free trips you get to make.

5. I gathered overtime hours to get extra time off. However, I still have one week of vacation days off that I’m taking with me to the next year. Generally, I work about 10 weekends a year so that gives me about 10 extra vacation days, meaning about 34 days off.

Other than that, I have no idea how I pulled it off. Really, no clue. I know that for a full time travel blogger, 131 days away might not be a lot but for someone with a full time job it is. At the beginning of this year, I couldn’t even have dreamed about traveling so much. Seeing all these magnificent places and meeting so many new people. Being away from home and still being able to keep this blog running, read 40 books and keep up a busy social life.

Are there things I miss because I have no time for it? Sure do… You may not believe it but I love cooking and baking. Just like a perfect housewife, however I’m far from that. Nowadays, my idea of the household is, that cleaning isn’t necessary unless it looks dirty. So when you’re not home, it can’t get dirty… if my friends have ever felt they were in a dirty place I don’t know, however my mother who has a real eye for cleaning thinks the place looks great, so I assume that I’m doing OK considering that. I also really enjoy watching movies but I just didn’t have time. Instead, we did manage to finish some series, such as Breaking Bad, Penoza, Homeland and The Walking Dead.  Just one series of each so it’s not a big thing but then again, I generally don’t care much about watching tv anyway…

Some other statistics include:
– 21 trips, of which 3 one-day trips, 2 trips of 10+ days and just one of 3+ weeks.
– 11 of those trips were by plane, the other by car
– 4 trips were within The Netherlands, 4 outside of Europe and the rest within Europe
– 31 flights, including 8 across “the Big Pond”
– 7 airlines, of which, as always, KLM is still my favorite
– 4 press trips, 2 work trips and the rest were 100% fun trips
– 10 out of 21 trips were done together, so on the other 11 I went by myself, however I was never really alone for longer than a couple of days
– 14 countries, of which 1 new one (Norway) and one “unofficial” new one: Curaçao
– in addition to my trips, Martijn also did 5 trips by himself

Now that I’m writing, I think this blog has become pretty long already. So instead of sharing my highlights of the past year, I’ll end here. Last words of the year…

For now, I can just wish all of you dear readers all the best for 2015. That it may come an adventurous year in which you will get to see and explore as many new places as you would like to. Never forget: adventure is for everyone, you just have to know where to find it!