Happy birthday to … us! Today, to be more precise tonight at 6.00 pm European time, marks our 14 year anniversary. 14 Years together, filled with travel, right from the start. During these years we have visited 43 countries and were away from home about 2 months on average each year. Yes, life has been good for us. Here’s a list of our favorite trips we took together. Off to the next  14 years!

2000: Paris, France
Our first real trip together! We went for 2 days, one sightseeing in Paris and one in Disney Land, or Euro Disney (or however it’s called nowadays). We went back there in 2002 and 2004 … it’s just a city that can never make you bored…

2001: Malta
Just before Martijn left to study in Finland for 5 months, we made a trip to Malta together. Unfortunately, there’s just no (not even one) picture of us together. So instead, we found this photo that my mother took when picking us up at Schiphol.

2002: New Zealand
Anto leaves for Australia in the fall of 2002 and after two months of backpacking, she flies to New Zealand where she is reunited with Martijn. During this trip, our love for New Zealand was established: until today this is still our favorite place on the planet! Picture: on Franz Josef glacier, our first glacier ever!

2003: Australia
In January we spend another 6 weeks in Australia, this time together, traveling along the south and the east coast. We visit bustling cities such as Sydney, Melbourna and Brisbane, see Fraser Island and go snorkeling at the Great Barrier Reef. When the money is finished, it’s time to go home again. Picture: at the Twelve Apostles, Great Ocean Road. 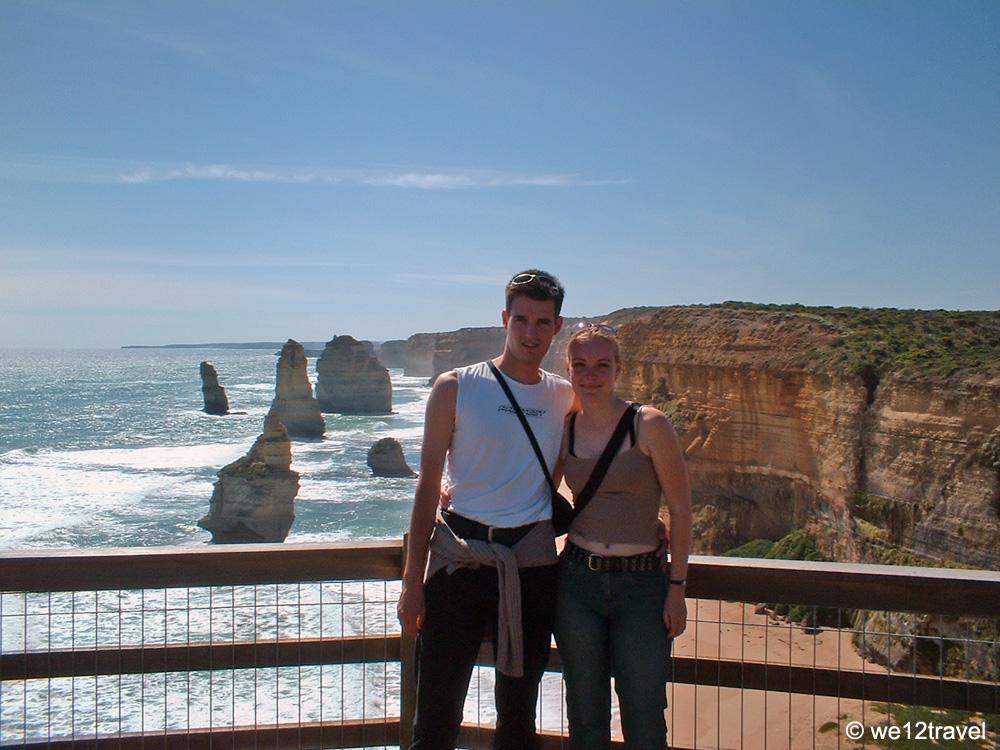 2004: British Columbia and Alberta, Canada
An English lady we met in New Zealand told us she had never seen anything prettier than NZ before, except for the Canadian Rockies. So that’s where we went to in 2004. A great trip but unfortunately with a lot of poor weather… Picture: on Banff Mountain in Alberta.

2005: Cambodia
Our first (and still last) real visit to Asia: we go backpacking through Thailand for 2 weeks and joined a tour through Cambodia and Laos afterwards. It’s a great learning experience for us, however somehow the Asia virus many travelers have caught, just doesn’t do it for us.

2006: New York
Quickly after returning back home from Asia, we leave for New York. It’s sunny and cold and even though we enjoy it a lot, the city is too big for our taste. 6 Days in the Big Apple is just about long enough.

2007: Peru
This year marks our first real multi-day trekking, we decide to do the Inca Trail. An awesome 4 day trek leads us through the Andes mountains, into the jungle and finally to the impressive Machu Picchu. Our passion for hiking is born! Picture: on a boat on Lake Titicaca.

2008: Newfoundland, Canada
Whale watching, ancient icebergs, moose and plenty of hikes are just some ingredients of our roadtrip on Newfoundland, Canada’s most eastern province. Visited by way less people than the west, we totally fall in love with this raw piece of Canada.

2010: Brazil
Unfortunately we have no money to do a real “exploration-far-away- trip” this year so for our 10 year anniversary we book ourselves a beach style vacation to the seaside town of Pipa, Brazil. Not really our cup of tea but we have fun anyway…

2011: New Zealand
Our favorite trip in our 14 year history to date! Everything cooperated: the weather, the circumstances, our physical condition… our 6 week tramping trip in New Zealand was everything we had hoped for! Picture: on the Kepler Track (ps: selfies are not typical 2013 you know…)

2012: Scotland
No need to go far to see awesome wilderness, which we had been told by a Scottish couple we met in New Zealand. So: off to Scotland for hiking, camping and more. Definitely a place we’d love to go back to one day! Picture: on the top of Ben Lomond.

2013: USA
A one month long road trip through Colorado, Wyoming and Utah combined with hiking, biking and canyoneering. We admire rock formations, supervolcanoes, bears and gorgeous sunrises. Another favorite trip of ours so far! Picture: Monument Valley.

2014: Patagonia
Again, just because we love it so much! Highlight of the trip was our 5 day cruise with Stella Australis through the fjords of Patagonia and Tierra del Fuego. Reachting Cape Horn was a magical moment and the glaciers here are stunning. Picture: at Pia Glacier in Alberto de Agostini National Park, Chile.

2015: ???
Who knows? We take turns picking destinations, Anto picked USA in 2013, Patagonia was completely mutual, so Martijn will make the final decision for next year’s “Big Trip”. On the shortlist are Japan, Tasmania, South Africa and Nepal. Other suggestions, anyone?

How we manage to travel together for 14 years and how come we still don’t kill each other after spending so much time together is a competely different story. So keep an eye out on our Sunday Social Travel Talk series in the future.

Want to read more about us? Continue here:
– the 10 year we12travel history
– Sunday Social Travel Talk: How come you travel so much?
– The we12travel bucketlist